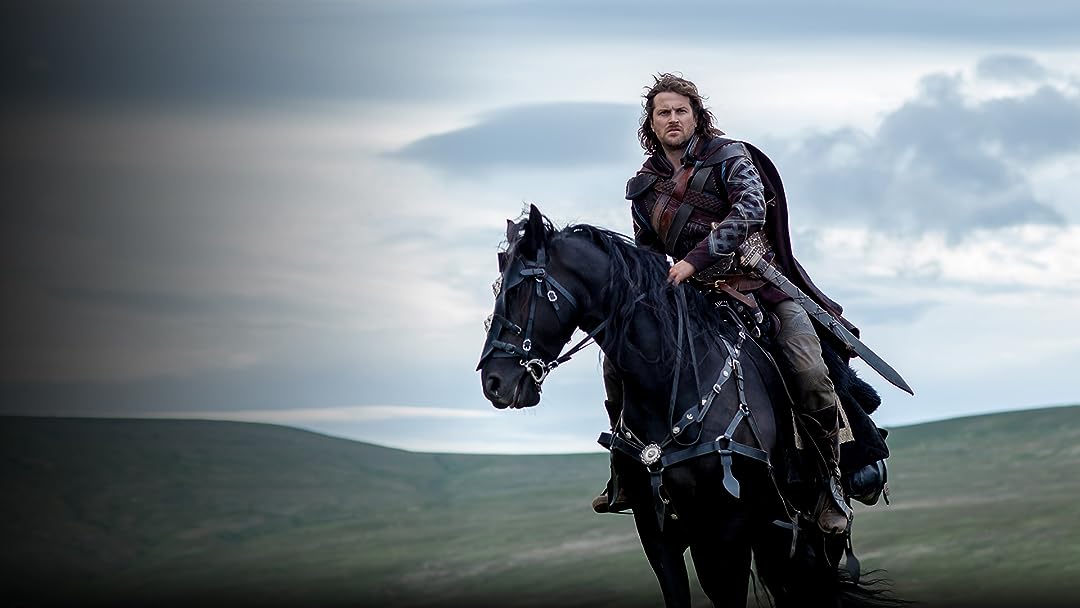 Beowulf: Return to the Shieldlands

Season 1
(233)
2016X-RayTV-14
This spectacular drama reimagines one of literature's most enduring heroes, the great warrior Beowulf. In a place of spectacle and danger populated by both humans and fantastical creatures, Beowulf begins a journey that sees the mighty and capable man slowly reconnect with the notion of family and home.

Frosty Cold OneReviewed in the United States on January 28, 2016
3.0 out of 5 stars
Could get better, could get worse...
Verified purchase
As I write this, there are only 5- or 1-star reviews. I say don't believe either: Beowulf is not a masterpiece, but it is clearly not terrible either. As it's obviously riding the backs of runaway successes like Vikings and Game of Thrones, we could be forgiven for dismissing Beowulf as simply a copycat series. But after viewing two episodes, I'm not convinced Beowulf doesn't have a strong personality of its own that warrants attention.

PROs
✔ Cinematography: Ambitious. Not only the locations chosen for shooting, but the occasional elaborate set.
✔ Actors: Not consistent in quality, but more hits than misses. Kieran Bew as Beowulf is capable in his craft, on top of [for some viewers] sex appeal. William Hurt, a personal favorite, appears in flashbacks (yup, Beowulf's got damned flashbacks) each episode. I like Gísli Örn Garðarsson as the comic relief character: don't worry, it's a moderate humor rather than cheesiness that could ruin an otherwise serious show. Edward Hogg is absolutely fantastic as Varr, and writing that made me just realize his character may be inspired by Lord Varys (so perhaps it is a copycat serial!)

CONs
✘ Plot & Characters: Will depth be added in future eps? Beowulf's world is not bad so much as it isn't particularly good. I very nearly forgot the entire plot the day after viewing the pilot; thankfully, the story thickens up a bit in the second episode with the introduction of more thanes. Sadly, however, Beowulf is perhaps the least interesting character.
✘ Supernatural? I want some sorcery. Sure, there are a couple of fictitious fuzzy monsters in Beowulf, but more is needed to remind us we're not watching the History channel. Either go all the way or go home.

Final thoughts: I'll continue on despite the absence of a crush on any of the female actors, which is usually my primary reason to keep up with mediocre fantasy at all. Coincidentally, I'm currently watching the first season of another mediocre UK fantasy series, BBC's [[ASIN:B00FRQ0P5C Atlantis]] (which was cancelled after two seasons). I don't know if Beowulf is any better (or should I say any worse), but at least it is different.

L. Lenn SissonReviewed in the United States on January 27, 2016
5.0 out of 5 stars
Visully Stunning but Definitely NOT the Poem
Verified purchase
Note that this review is based only on the first episode. Also, please note that I am in no way shape or form associated with the series, nor have I been paid to write this review. I found the series online and thought it would be interesting, so I gave it a try and (so far) I've really loved it)

Having said that, on to the review. First of all, you need to understand that the show is only very loosely based on the original epic poem. If you want something that follows the poem, then don't look here.. On that point, I agree with the other two reviewers. Beyond that, I am in complete disagreement with them. I thought that the show is visually stunning, the CGI was fantastic (for a television series), the script for the first episode was good (again for a television series) and that the acting was quite good.

The story follows Beowulf, who returns to the "Shield Lands" to say goodbye to his old thane, who raised him after the death of his father. He arrives to find the thane dead, the thane's son still harboring a long-standing grudge against him, monsters showing up to wreck havoc, and political maneuvering taking place in the vacuum left by the death of the thane.

I would recommend trying the first episode, just to see if you like it. For myself, I enjoyed it very much and plan to look at the rest of the season.
6 people found this helpful

Pulpmaster FlashReviewed in the United States on January 2, 2017
3.0 out of 5 stars
Partly good fun, partly full of anachronistic stupidity...
Verified purchase
Ugh. This started great, and then it quickly went downhill. Someone should tell the writers that events in the original epic took place in the 5th century, and the Moors didn't start showing up in Western Europe until the 8th century. Maybe that's what the whole "a legend reclaimed" thing was all about, but if so I don't get who they were reclaiming it for, unless it was for people who never cracked a history book.

Anyway, beyond the anachronisms and other silliness it's still kind of fun to watch. The special effects are okay in a Grimm sort of way, and the sets aren't half bad either. Unfortunately, some of the fight scenes are really pathetic, and much of the action is reminiscent of "Hercules the Legendary Journeys" and Xena. I kept expecting Kevin Sorbo to jump out and yell, "Disappointed!" after every fight.

Other than the distinct lack of Kevin Sorbo, I think the most disappointing thing about this series is that Keiran Bew's acting chops are wasted on the stilted dialogue and purple prose. And even when they give him decent lines, the rest of the cast is hit or miss as far as their acting ability goes. Too bad they couldn't pay William Hurt enough money to stick around for the entire series. Maybe between Hurt and Bew they might have propped up this mediocre excuse for a Beowulf adaptation.

I grudgingly give it three stars.
50 people found this helpful

Lor MichelleReviewed in the United States on April 25, 2016
3.0 out of 5 stars
Mildly entertaining, but reeks of Game of Thrones / Vikings style knock-off.
Verified purchase
The whole show played out/looked like/sounded like/felt like it was trying a little too hard to be Game of Thrones, Vikings, and Lord of the Rings all at once. The dialogue was lackluster and unimpressive, pausing and cutting away at strange intervals, and they gave us very little in the way of character depth or development, rarely explaining WHY this character thinks like this, or WHY this happened the way it did, etc. The score was intriguing in some places, but again, sounded more like a Game of Thrones knock-off, and while I appreciate their efforts to tap into the successful formula that shows like GoT and Vikings thrive on, I was hoping for something a little...fresher. Had Beowulf not taken the 'safe' path and instead tried to forge their own as far as looks and sounds go, it might have been a better show. I'd love if the writers could give us a little more as far as characters go, and a little less on the politics of the realm. On a closing note, it WAS fairly entertaining, but it was the type of thing I'd watch when there was nothing better on.
3 people found this helpful

girkerieReviewed in the United States on March 2, 2022
5.0 out of 5 stars
Better than the original
Verified purchase
Watched both original and director's cut. If you want the manliest movie of the 2000s to be more manly, here you go.

RobinReviewed in the United States on March 21, 2016
5.0 out of 5 stars
I do believe that this series can be great!!! I have watch as they come out.I LoVe it so far 8~)
Verified purchase
I like that this is not a copy cat of any of the other Beowulf out . I do not understand the reason yet to why it's called Beowulf either I do believe it could of went with another name ? Although I do believe that this series can be great. I really love were is going .I think that the slow take off is not bad, because there is so many interesting ways that this can go.I like the different creature's and the of course you have to have a villain or two that are always plotting something . Then you have secrets and the drama within . I believe they are trying to set the story line for each ,the villain,secrets& drama ,love ,the different creative creature. I wouldn't be so patient if it were a movie .Because this is a series I get it .I hope this series makes it. ~Robin.~ PS hope I made sense I have MS a have a hard time with that sometimes.
2 people found this helpful

NeemReviewed in the United States on June 3, 2016
3.0 out of 5 stars
ok
Verified purchase
One of those action packed serials that oftentimes seem to repeat themselves. You can get tired of it. But I watch them while I'm doing other things, so they are easy to keep track of if you are multitasking. Lots of legendary stuff made to fit the story. For sure you won't get bored. Acting is passing good. Costuming leaves a lot to be desired.
One person found this helpful

RobRockReviewed in the United States on December 2, 2018
5.0 out of 5 stars
Entertaining
Verified purchase
It's entertaining enough. Giving it five instead of four because the one-star raters or so silly. They want accuracy in a fantasy series. Accusing it of being a GOT knock off. Complaining about black people being so far north. It's a fantasy series. One should know to put brain in back pocket going in.
53 people found this helpful
See all reviews
Back to top
Get to Know Us
Make Money with Us
Amazon Payment Products
Let Us Help You
EnglishChoose a language for shopping. United StatesChoose a country/region for shopping.
© 1996-2022, Amazon.com, Inc. or its affiliates