You've subscribed to First Time Books(R)! We will preorder your items within 24 hours of when they become available. When new books are released, we'll charge your default payment method for the lowest price available during the pre-order period.
Update your device or payment method, cancel individual pre-orders or your subscription at
Your Memberships & Subscriptions
There was an error. We were unable to process your subscription due to an error. Please refresh and try again. 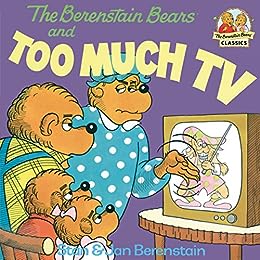 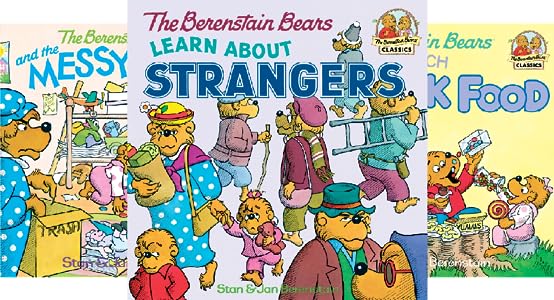 ar decides her family spends too much time in front of the TV, she bans it for a week. Then the Bear family finds other ways to have fun and keep busy, so they watch less when TV is allowed again--and they don't even miss it. --This text refers to an alternate kindle_edition edition.

*  Stan and Jan Berenstain were both born in 1923 in Philadelphia.  They didn't know each other as children, but met later at school, at the Philadelphia College of Art.  They liked each other right away, and found out that the both enjoyed the same kinds of books, plays, music and art.

*  During World War II, Stan was a medical assistant in the Army, and Jan worked in an airplane factory.  When the war was over, they got married and began to work together as artists and writers, primarily drawing cartoons for popular magazines.

*  After having their two sons Leo and Michael, the Berenstains decided to write some funny children's books that their children and other children could read and enjoy.

*  Their first published children's book was called The Big Honey Hunt .  It was about a family of bears, who later became known as the "Berenstain Bears".

* Over 50 children's books later, Stan and Jan still plan all of their books together -- both write the stories, and both write the pictures.  They live outside of Philadelphia in the country.   --This text refers to an alternate kindle_edition edition.

4.9 out of 5 stars
4.9 out of 5
1,270 global ratings
How are ratings calculated?
To calculate the overall star rating and percentage breakdown by star, we don’t use a simple average. Instead, our system considers things like how recent a review is and if the reviewer bought the item on Amazon. It also analyzes reviews to verify trustworthiness.
Top reviews

ʟındsaү
5.0 out of 5 stars a fave fr my childhood is literally saving the day...
Reviewed in the United States on August 25, 2019
Verified Purchase
Our seven yr old has struggled tremendously w all things reading and writing. I cant even begin to quantify the hrs of sleep I've lost worrying, stressing, crying... trying to find something -ANYTHING!- to spark his interest and turn him onto reading.

And then I remembered the Berenstain Bears. These funny little bear books are our miracle. I've LOVED to read my whole life. I have the fondest memories of my grandmother reading dozens of Berenstain Bears books to me as a little girl... and then of me re-reading them to her. Introducing our little lovey to the Berenstain Bears has been jst... wonderful.

YES - They're too, too much for a six or seven yr old to read solo. They're def intended for co-reading / joint reading.
For me - these are the perfect books for teaching grade school kiddos ab theme, plot, character developmt, etc... while slowly transitioning fr me reading to him and daddy [ha!] to him reading to us.

Gloria A Vincent
5.0 out of 5 stars ANY Berenstain Bears book is good for kids
Reviewed in the United States on February 1, 2017
Verified Purchase
ANY Berenstain Bears book is good for kids, especially in this day and age. My son is 26 and loved all the books when he was little, me too. I just sent some to my Godchild with small kids. Please everyone, remember: NO putting your kids on your smart phones to watch a video to shut them up -- take the time to SIT with your kids and read a damn book with them! --gv
Read more
8 people found this helpful
Helpful
Report abuse

Keith
5.0 out of 5 stars We all need the Berenstain Bears
Reviewed in the United States on April 5, 2021
Verified Purchase
I grew up on the Bears. I can also tell not a lot of today’s youth have ever opened one Bear book, and it shows. Great moral lessons and common sense throughout the series. However we need a updated book. Too much social media and too much news.
Read more
Helpful
Report abuse

Miss Howe
5.0 out of 5 stars Too Much TV is Great!!!
Reviewed in the United States on January 6, 2013
Verified Purchase
The Berestain Bears are up to no good while encountering a rut of being caught up in the middle of too much television. This is a great book that teaches children there is more to life than just watching the old tube. Stan and Jan Berenstain do a marvelous job at telling the story of Mama Bear putting her foot down when her family becomes obsessed with television. There is so much more to life than television. The bear cubs take time to remember how fun it is to play out doors, read a book, or just talk with other family members. This is a must have book for any Berestain Bear lover. The book was purchased at a steal of a price, wound up in my mailbox just days after ordering, and is in wonderful condition.
Read more
5 people found this helpful
Helpful
Report abuse

Marvin G.
5.0 out of 5 stars Berenstain bears
Reviewed in the United States on August 23, 2020
Verified Purchase
A really adorable book with a lesson and. Colorful pictures. My grandson loves all of them!
Read more
Helpful
Report abuse

ahawk
5.0 out of 5 stars Classic
Reviewed in the United States on December 3, 2016
Verified Purchase
WHO doesn't love the Berenstain Bears!? These are household favorites! And there seems to be one for almost every occasion. I get them for my kids as the situation calls for it. First day of school, Too much TV, Chores, New Baby, easing..... you name it. My 4 yr old is going to be getting a few of these for Christmas this year!! Cause Santa knows what's up!! ;)
Read more
One person found this helpful
Helpful
Report abuse

MH
5.0 out of 5 stars Our kids love Berenstain bears books
Reviewed in the United States on October 17, 2017
Verified Purchase
Our kids love Berenstain bears books! We read one of them almost every night. Good read to encourage other activities other than TV (and now phones).
Read more
One person found this helpful
Helpful
Report abuse
See all reviews

Kindle Customer
3.0 out of 5 stars cute but too educational
Reviewed in the United Kingdom on June 20, 2014
Verified Purchase
Their old black-and-white TV broke down (good luck trying to explain that to a kid) and mama decided the new cable TV is too popular. After a week of no TV they all find other interesting things to do, even papa. So, cute, but too educational.
Read more
Report abuse

Michelle
5.0 out of 5 stars Love these books!
Reviewed in the United Kingdom on June 17, 2019
Verified Purchase
Great message! As with all Bernstein bear books. Bought to read to my daughter
Read more
Report abuse

Amazon Customer
5.0 out of 5 stars Fun story and good lesson
Reviewed in the United Kingdom on March 20, 2015
Verified Purchase
Great story and everyone loves the way Papa Bear needs to reduce his TV watching too :)
Read more
Report abuse

UmmKhadeeja
5.0 out of 5 stars funny book
Reviewed in the United Kingdom on August 4, 2014
Verified Purchase
I liked it when papa bear went to the TVs in the shop so he could watch tv. It was funny
Read more
Report abuse