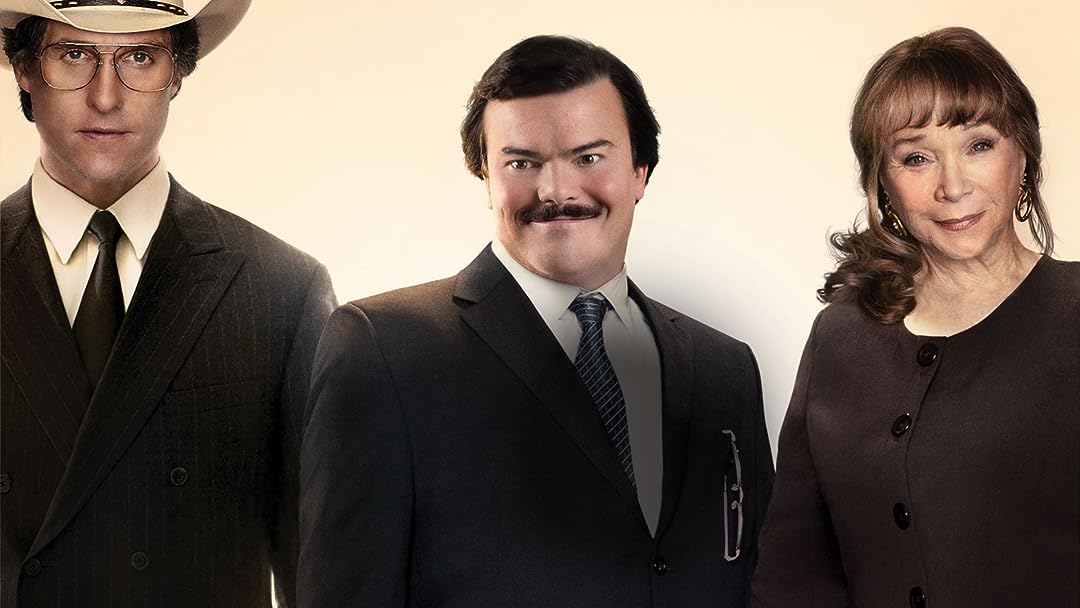 (1,535)
6.81 h 39 min2011X-RayPG-13
In the tiny town of Carthage, TX, assistant funeral director Bernie Tiede (Jack Black) was one of the town's most beloved residents. He taught Sunday school, sang in the church choir and was always willing to lend a helping hand. Everyone loved Bernie, so it came as no surprise when he befriended Marjorie Nugent (Shirley MacLaine), an affluent widow. Directed by acclaimed auteur Richard Linklater.

Doris franklinReviewed in the United States on May 18, 2016
5.0 out of 5 stars
Bernie, a pleasant surprise and a shame this movie didn't get the recognition it deserves.
Verified purchase
Jack Black is a likable actor but sometimes he takes parts that don't really bring out that quality. I watched Bernie because I'd read about the murder that the movie was based on. What I didn't expect was a performance that deserves recognition. Black was perfect as the mortician who ends up in prison for murdering the nastiest woman in town. I felt such a pity for his character that if I'd been on the jury softie that I am I would have voted not guilty. Shirley MacLaine was perfect as the reviled widow Marjorie Nugent who was wealthy but miserable. Did Bernie victimize the elderly widow or did she victimize Bernie? He enjoyed helping her spend her money but when it came to putting up with someone nobody could stand Bernie earned it. The movie was full of sly small town southern humor and I admit I laughed several times. Jack Black has a beautiful singing voice and it's showcased in several songs in the movie. The movie also had some very poignant moments which endeared it to me. Did I like Bernie? After seeing it for free on Showtime I bought the movie on Amazon Prime for my playlist because it's the kind of movie you'll want to watch more than once for the many humorous moments throughout the film. If you watch Bernie google the murder and find out how Bernie is doing now, you'll be surprised .
58 people found this helpful

Judy WilsonReviewed in the United States on December 6, 2018
5.0 out of 5 stars
Daily life in Texas
Verified purchase
I really liked this movie even though it was about a real situation. I'm so glad the actors were of such high caliber, Jack Black, Shirley McClain, and Matthew McConeghey (sp). The acting was so stellar it made me miss my family even more, if that's possible. I'm from Texas, transplanted up North by way of marriage. I moved from Texas to California when I was 9. But, I truthfully can say that the people in this movie are right on, having spent my entire life surrounded by the love and spirit of my Texas family. Now I know where I heard the saying, "well, he needed killing". But, I never heard, "that dog won't hunt" until Jeff Foxworthy made a joke about it. I hope you watch this movie, especially if you're southern. You will enjoy it immensely.....
24 people found this helpful

LauraReviewed in the United States on December 21, 2018
5.0 out of 5 stars
Unexpected movie
Verified purchase
Jack Black gives a tour de force performance creating a truly beloved man of his community, his friends, and God. And Shirley McClain is literally the supreme and sublime mature woman I love to watch. She shows her depth in this character's layered mental absorption of a selfish woman of means. But when love blooms she allows her to be human and reachable if only for a brief period of time. SO much so, I was actually surprised when she unexpectedly reverts to the crotchety hateful old woman you just want to get what she deserves by the time she does! I Shirley is one of the best actresses the business has ever had and still shows a magnetism even now. There are several movies circulating around the various al a carte venues and she is just terrific in them. Jack has matured as few actors of his physical style of comedy performance rarely do. It was quite a revelation that performance. And the vingettes were so amusing and perfectly evocative of small time characters and the gossip about town that is the cement of living long within enclosed spaces. Well done all.
20 people found this helpful

CH GorogReviewed in the United States on January 31, 2019
5.0 out of 5 stars
A Fascinating Story of a Small Town, a Beloved man, and a Crime
Verified purchase
"Bernie" is a great biopic concerning Bernie Tiede (played spectacularly by Jack Black). When he's not working as an Assistant funeral director, Bernie is a happy, friendly, considerate, and involved member of the community, going to church, performing stage plays, and handing out friendly advice and socializing with every person he can find. But that's all turned upside-down when he strikes a friendship with Marjorie Nugent (a wonderfully cold and reserved Shirley MacLaine). What starts out as a warm friendship that brings Marjorie out of her shell soon becomes something that gets out of control, and after a particular crime, District Attorney Danny Buck Davidson (Matthew McConaughey) is brought in to sort out the rubble.

It's a great morality play of analyzing the actions and life of what seemed to be a sweet and innocent man through the lens of the law, with interviews of the townspeople adding to not only the mystery around Bernie (including speculation on aspects of his personal life), but authenticity to sell the confusion and shock of a town hearing the accusations and crime in question. Of course, this being a bio-pic rather than a straight documentary, take everything presented with a grain of salt.

Check it out! It's a great film.

Wendy J.Reviewed in the United States on March 18, 2019
4.0 out of 5 stars
Didn't know the story. Watched twice, before/after research. Lots of questions....
Verified purchase
Had I rated this after the first viewing, would've been 5 stars with exclamation points!!! Not so much after the second viewing, after I'd looked up more information on the actual story, although there were still some great scenes and enjoyable performances. I'd put my final rating above 3/below 4, but I rounded up to be fair to the players (regardless of my views on crime and the so-called legal system). I assume the reader knows the story, so there are probably some spoilers to follow. I was looking for a good comedy and thought this fit the bill, I was literally laughing out loud the first time around and loving MM's performance - BUT I didn't realize this was actually a true story. I know, I know, it says that right at the beginning, but I really thought that was part of the movie - fit in with the 'documentary' theme and pretty sure this was listed under comedy or had reviews indicating it was funny. Still some funny parts, though, and still loved MM's performance but definitely had a different viewpoint while watching after knowing the story. Seemed much slower the second time around. Still not sure how a first degree murder conviction was obtained, twice. (Second trial due in no small part to this movie.) Maybe there's something in the written confession (which was allegedly coerced) - ? Also not sure how 'family' convinced anyone they cared about someone with whom they never visited or even spoke, but money is clearly a big motivator. Whether the woman was mean or ornery or nice or gracious, she had a right to her money. If she wanted to spend lavishly on someone, that's her choice. If she didn't want her 'family' to have her funds, also her choice. It seems the victim was murdered and then aggrieved further in death, in more ways than one. As far as movies go, this one was pretty good, but I think they could've added some more factual information from the trial. Was this supposed to be a statement on the so-called justice system or just a TX story? (So did anyone else notice that MM does not look at his Mom in the scene they did together???) Lastly, for those who seem surprised by Black's performance, they've probably not seen many of Black's performances. This is right up his alley.

Graham CrawfordReviewed in the United States on March 20, 2019
4.0 out of 5 stars
Laughs to Lump in the Throat
Verified purchase
I found director Richard Linklater's Boyhood to be a crushingly dull experience, so his much juicier Bernie was a pleasant surprise. From the meticulous opening scene where Jack Black's assistant funeral director enthusiastically but tastefully describes proper embalming technique to the murder and trial this movie is sharply satirical. It's one of those hard-to-believe-it's-true stories that successfully mimics the pacing and tone of Discovery Channel-style true-crime exposes. In the hands of a lesser director/star combo the title character could have come across as a buffoon or caricature. But Black lets you see Bernie's genuine warmth and humanity while at the same time being very funny and tragic. The real-life Carthage, Texas townspeople are often hysterically funny as a sort of Greek chorus who support Bernie through and through, though I do think at a certain point in the story they become a bit repetitive. The courtroom scene is the key to the movie. There's a funny and telling exchange between Bernie and Matthew McConaughey's overzealous D.A. over the proper pronunciation of Les Miserables that pivots from comedy to tragedy very effectively. You won't expect it but the movie does exactly the same thing, goes right from laughs to lump in the throat.

Brian S. WalkerReviewed in the United States on January 6, 2019
2.0 out of 5 stars
Slow, boring, poorly edited, very fake looking
Verified purchase
The "interviews" are almost all horrible. They look so staged and over done. Just when you get into the true characters of the story they flip to a boring interview about nothing. Just about the same identical comments over and over and over again. Just horrible. No wit, no deep characters, nothing. What a waste of deep-character talent. Cut scene, cut scene, cut scene, was this movie shot and edited in 3 days of single takes? About as polished as Saturday Night Live skits, the ones in the last half hour of the show.
2 people found this helpful

PureWishingReviewed in the United States on January 13, 2021
1.0 out of 5 stars
I wanted to like this...
Verified purchase
...with the caliber of actors who, admittedly did a good job with bad subject matter. It is the sad story of a true murder. My biggest beef is the treatment of the subject matter seemed to be glorifying the murderer like he is some sort of hero. He even gets a few real life pics at the end of the film, before the credits. He preyed upon, and murdered a widow, and comes off as a good guy. Reading articles about the film, even makes it seem like this murder was condoned by the filmmaker. That is never ok in my book. Disappointed in the film for portraying a murderer as a sympathetic character, when he is truly just a sad, sick person. Will not watch again.
See all reviews
Back to top
Get to Know Us
Make Money with Us
Amazon Payment Products
Let Us Help You
EnglishChoose a language for shopping. United StatesChoose a country/region for shopping.
© 1996-2022, Amazon.com, Inc. or its affiliates