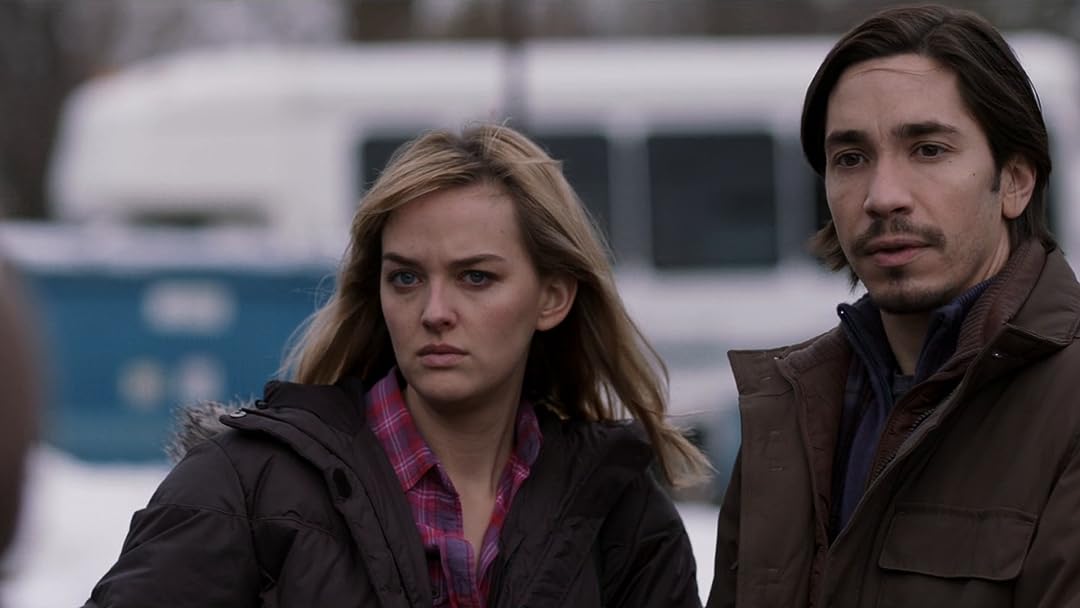 (136)
6.41 h 29 min2013X-RayPG-13
When their obnoxious and over-served best man, Lumpy (Tyler Labine), unexpectedly dies at their destination wedding in Phoenix, bride Kristin (Jess Weixler) and groom Scott (Justin Long) are forced to cancel their honeymoon and fly home to the snowy Midwest to arrange for his funeral. But getting Lumpy's body back to Minneapolis is just the start of their adventure, as the ...

Tim F. MartinReviewed in the United States on May 23, 2020
5.0 out of 5 stars
Sweet, well-done drama, not a romantic comedy or a wedding movie, but worthwhile
Verified purchase
Well-made drama that is decidedly not a romantic comedy or a romance or even a wedding movie, it an engaging story of really four people. Two are a married couple, newlyweds, we meet them the night of their wedding, two Minnesotans having a destination wedding in Phoenix, Arizona by the name of Kristin (played by Jess Weixler) and Scott (played by Justin Long). Their best man Lumpy (played by Tyler Labine) who, while obviously a great friend to Scott and more or less tolerated by Kristin, is getting drunk and obnoxious (though never mean) at the wedding reception. Cut off from the bar by Scott for Lumpy’s own good, Lumpy goes back to his hotel room. Not to give too much away, Lumpy dies in an accident out in the desert and is found the next morning before Kristin and Scott can leave for the honeymoon.

The fourth character that for a time is in a seemingly completely unrelated story arc is a 15-year-old girl by the name of Ramsey Anderson (played by Addison Timlin), a woman who lives in a small northern Minnesota town something like a five-hour drive from Minneapolis (where Lumpy, Kristin, and Scott lived). We see she is obviously quite intelligent, her Mom is doing the best she can for her, a local priest is also helping Ramsey out as much as he possibly can, but the family doesn’t have any money, it looks like Ramsey won’t be able to afford college, and her Mom has a live-in abusive drug-dealing boyfriend who is starting to try to rope Ramsey into his drug dealing schemes.

These two storylines seem to have nothing to do with one another until we see Kristin and Scott, going through Lumpy’s phone to try and find friend and family to reach out to, find Ramsey’s name and number. Never having heard of Ramsey and unable to reach her via phone, Kristin and Scott seek out to find the mysterious Ramsey with the two plotlines becoming one.

The film is at about growth and discovery, including the growth of Ramsey into adulthood, of Kristin’s and Scott’s relationship confronting a series of big setbacks (job related, money related, the cancelled honeymoon among others), and of everyone discovering who Lumpy really was.

Though at times it was kind of dark, not quite bleak but definitely a downer, it was ultimately a sweet movie. I liked how the different plot threads intersected and I was impressed how multi-dimensional the various characters were, that Lumpy seemed one type of person at the start of the film and we got to know an entirely different character, and while it looked like the newlyweds were headed for disaster, both characters were adults and adapted and overcame, and also while initially it seemed Ramsey was one type of person she really wasn’t what she first appeared.

A good film, I liked it. Some nice shots of the Minnesota countryside and of downtown Minneapolis.

Penny BrightReviewed in the United States on May 1, 2021
5.0 out of 5 stars
Made me cry, and totally worth it
Verified purchase
I was desperately digging around for a movie I hadn't seen yet, and came across this one. I'm really happy that I found it.

I cared about all the characters...even if I didn't like them I was still invested enough to see what happened.

There's no pollyanna stuff here - just people being funny, being sad, being hateful, being loving.

The first 45 minutes went by without my even realizing it, and the rest of the movie flew by too. That's high praise from me. It isn't for everyone, but heck...if it's free for you, give it a try.
One person found this helpful

MyOpinionReviewed in the United States on March 24, 2021
2.0 out of 5 stars
Waited for it to develop....
Verified purchase
Bleak...tries to be some type of heart felt wonderful friends movie...fell short. Irritatingly boring and dribbled on and on with weak characters, poor plot. The Ramsey character was more of an entitled brat than someone I could feel empathy for with the things she kept pulling. Didn't enjoy the characters, the story or the over all tone...little reward in watching this dismal story for 1 hour and 25 minutes. D letter grade.
One person found this helpful

Amazon CustomerReviewed in the United States on April 28, 2021
4.0 out of 5 stars
really quite entertaining
Verified purchase
surprisingly good. takes a while to figure out who all the people are, but once you do the film starts to come together. other than the super-sleaze who is off the charts, the other characters are more or less believable. the newly married couple make for some light moments. the actual plot is not as notable as are the various moments, some of which were surprisingly touching.
One person found this helpful

KS_SLCReviewed in the United States on May 10, 2021
1.0 out of 5 stars
No editing, disparate story lines, inconsistent character
Verified purchase
It's difficult to come up with anything to like about this movie. The disparate story lines were slow to come together, which would be acceptable if they were well edited. But each thread meandered, with loads of extraneous lines that has nothing to do with anything. Mostly left me thinking "who cares," and "what does this movie want to be about?" The characters were reasonably likeable, but inconsistent, again due to the poor writing. One start at best

T.RomaReviewed in the United States on May 11, 2021
4.0 out of 5 stars
Simple non pretending to be otherwise feel good movie
Verified purchase
In a supposedly sophisticated world of today, where everybody says one, thinks something quite different and acts in the third way while most of the mortals get their valuable intellectual food in famous people's quotations having been picked usually from free metro newspapers, it is nice to see a movie devoid of any pretensions to be of an art house origin, but just telling not too original but keeping good pace, having mostly even believable plot, made by a good professional team and with a lot of good intentions. A feel good movie.

Mark ShowalterReviewed in the United States on May 31, 2015
5.0 out of 5 stars
An Unusual Story That Shouldn't Be Missed
Verified purchase
This movie manages to cover so much ground that it's hard to pin down just what to call it. It's a comedy with rather dark overtones, but it doesn't wind up in some dank celler. My only complaint, it should have been much longer, as the story has so much more to tell. The standout is a young actress who manages to pull almost every part of the film together without coming off as a convenient Maypole. And in the end, they guy gets the girl, but he already has the girl & another to boot. You'll see what I mean if you watch this gem. No, it's more like a pearl......
One person found this helpful

P. Austin HeatonReviewed in the United States on March 11, 2021
5.0 out of 5 stars
Can't Judge Your Best Friend by Their Cover
Verified purchase
It dragged in a couple of spots, but it was a lovely, feel-good movie.
One person found this helpful
See all reviews
Back to top
Get to Know Us
Make Money with Us
Amazon Payment Products
Let Us Help You
EnglishChoose a language for shopping. United StatesChoose a country/region for shopping.
© 1996-2022, Amazon.com, Inc. or its affiliates