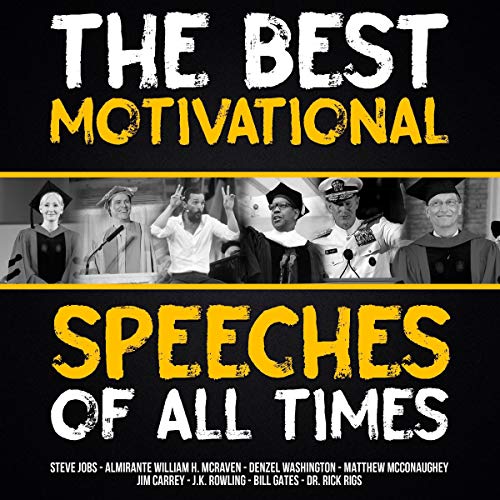 The Best Motivational Speeches of All Times

List Price: $6.99
You Save: $0.87 (12%)
By completing your purchase, you agree to Audible’s Conditions Of Use
Sold and delivered by Audible, an Amazon company
Share

4.1 out of 5 stars
4.1 out of 5
15 global ratings
How are ratings calculated?
To calculate the overall star rating and percentage breakdown by star, we don’t use a simple average. Instead, our system considers things like how recent a review is and if the reviewer bought the item on Amazon. It also analyzes reviews to verify trustworthiness.
Top reviews

Daniel Kilburn
5.0 out of 5 stars Very entertaining
Reviewed in the United States on April 15, 2021
Verified Purchase
Enjoyable listen while at work. I gave a copy to my granddaughter.
Read more
Helpful
Report abuse

J F Arteche
5.0 out of 5 stars Inspirational, instructive, witty, self-deprecating and exceptional.
Reviewed in the United States on January 26, 2021
The Best Motivational Speeches of All Times by Bill Gates and others
(Audiobook published by Author's Republic, December 7, 2020)

Author's Republic offers live audio recordings of nine speeches, each inspirational, instructive, witty, self-deprecating and exceptional in their own way, with varying qualities of recording. Excerpts are from the speeches; comments are the reviewer's.

"...I’ve been waiting more than 30 years to say this: “Dad, I always told you I’d come back and get my degree.

I want to thank Harvard for this timely honor. I’ll be changing my job next year … and it will be nice to finally have a college degree on my resume.

I applaud the graduates today for taking a much more direct route to your degrees. For my part, I’m just happy that the Crimson has called me “Harvard’s most successful dropout.”

I guess that makes me valedictorian of my own special class … I did the best of everyone who failed..."

2. Dr. Rick Rigsby, former Texas A&M professor, character coach and chaplain for the Texas A&M football team. "Lessons From a Third Grade Dropout" speech given at the 2017 Commencement Exercises, California State University, Maritime Academy. "To whom much is given, much is required." (5.0)

"...I have four degrees. My brother is a judge. We’re not the smartest ones in our family.

3. Everyone's favorite actor Denzel Washington's "Fall Forward" speech, University of Pennsylvania, 2011 . “If You Don’t Fail, You’re Not Even Trying.” (5.0)
"...Thomas Edison conducted 1,000 failed experiments. Did you know that? I didn’t either, because 1,001 was the light bulb.

Every failed experiment is one step closer to success. You’ve got to take risks. And I’m sure you’ve probably heard that before.

But I want to talk about why it’s so important.

I’ve got three reasons and then you can pick up your iPhones.

First… you will fail at some point in your life. Accept it. You will lose. You will embarrass yourself. You will suck at something. There is no doubt about it..."

You are ready and able to do beautiful things in this world. And after you walk through those doors today, you will only ever have two choices, love or fear. Choose love, and don’t ever let fear turn you against your playful heart..."

5. Author J. R. Rowling, Harvard University, 2008, on the eve of the release of the seventh and penultimate book of the series, "Harry Potter and the Deathly Hallows". (5.0)

A mostly serious and sobering but inspirational speech centered on two themes, (1) the benefits of failure, and (2) the importance of the imagination. She also talked about her own graduation, her parents, her own failures, of the events building up to her career as an author, and of her work at Amnesty International.
"...Ultimately, we all have to decide for ourselves what constitutes failure, but the world is quite eager to give you a set of criteria if you let it.

So I think it fair to say that by any conventional measure, a mere seven years after my graduation day, I had failed on an epic scale. An exceptionally short-lived marriage had imploded, and I was jobless, a lone parent, and as poor as it is possible to be in modern Britain, without being homeless.

The fears that my parents had had for me, and that I had had for myself, had both come to pass, and by every usual standard, I was the biggest failure I knew..."

6. Matthew McConaughey's "Thirteen Life Lessons" speech at the University of Houston, Class of 2015. (5.0)

"...Number one, and this should come up on the jumbotron, life’s not easy. Is it up there. Life is not easy. It is not. Don’t try to make it that way. Life’s not fair. It never was, it isn’t now, and it won’t ever be. Do not fall into the trap, the entitlement trap of feeling like you’re a victim. You are not. Get over it and get on with it. And yes, most things are more rewarding when you break a sweat to get them back. Fact.

Number two. I love this one. Unbelievable is the stupidest word in the dictionary. Should never come out of our mouths..."

He talked about being a adopted child, how he was diagnosed with cancer and how "being fired from Apple was the best thing that ever happened to me".
"...The first story is about connecting the dots.

I dropped out of Reed College after the first 6 months, but then stayed around as a drop-in for another 18 months or so before I really quit. So why did I drop out?

It started before I was born. My biological mother was a young, unwed college graduate student, and she decided to put me up for adoption..."

"...Reed College at that time offered perhaps the best calligraphy instruction in the country. Throughout the campus every poster, every label on every drawer, was beautifully hand calligraphed. Because I had dropped out and didn’t have to take the normal classes, I decided to take a calligraphy class to learn how to do this. I learned about serif and sans serif typefaces, about varying the amount of space between different letter combinations, about what makes great typography great. It was beautiful, historical, artistically subtle in a way that science can’t capture, and I found it fascinating.

None of this had even a hope of any practical application in my life. But 10 years later, when we were designing the first Macintosh computer, it all came back to me. And we designed it all into the Mac. It was the first computer with beautiful typography. If I had never dropped in on that single course in college, the Mac would have never had multiple typefaces or proportionally spaced fonts..."

8. “If you want to make a difference in the world, start by making your bed.”

That was the premise of a commencement speech delivered by Admiral William H. McRaven at the University of Texas at Austin in 2014, on lessons to be learned from U.S. Navy Seal training. (4.5)

9. Tony Robbins, author, coach, motivational speaker, and philanthropist. "Why We Do What We Do" speech at the TED Talks conference, 2014. (3.75)

In an infomercial sort of way, he talked about his voyage from shoe salesman to global therapist, and of his work at Feeding America.org.

He inserted quips about his time being up, "a few more seconds", "ten seconds", - giving the impression of being in a hurry, paid for his time.

Of the nine orators, quite possibly the only one expected to be paid to give a speech. And the least inspirational at that.

Rising up from adversity, from failure.

KatM
1.0 out of 5 stars NOT MOTIVATIONAL
Reviewed in the United States on January 29, 2021
He is not a motivational person! He is a controlling person.
Read more
5 people found this helpful
Helpful
Report abuse

Dburciaga
4.0 out of 5 stars Ironic
Reviewed in the United States on October 4, 2021
Kind of ironic Bill Gates mentions knowing about the corona virus before corona virus became a thing.
Read more
Helpful
Report abuse
See all reviews
Back to top
Get to Know Us
Make Money with Us
Amazon Payment Products
Let Us Help You
EnglishChoose a language for shopping. United StatesChoose a country/region for shopping.
© 1996-2021, Amazon.com, Inc. or its affiliates