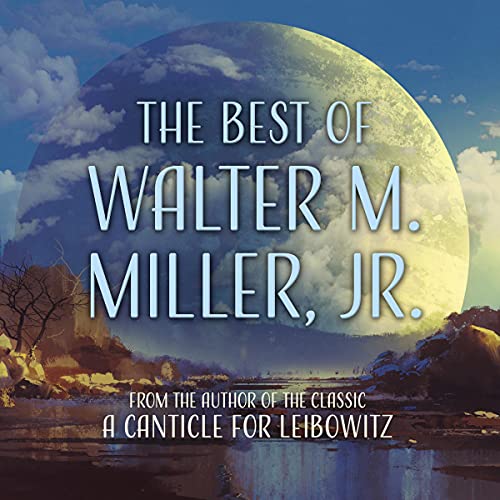 Walter M. Miller, Jr, is best remembered as the author of A Canticle for Leibowitz, which has been universally recognized as one of the greatest novels of modern science fiction. But in addition to writing that deeply felt and eloquent book, he produced many shorter works of fiction of stunning originality and power. His profound interest in religion and his innate literary gifts combined perfectly in the production of such works as The Darfstellar, for which he won a Hugo in 1955, Conditionally Human, "I, Dreamer", and "The Big Hunger", all of which are included in this brilliant and essential collection.

3.8 out of 5 stars
3.8 out of 5
10 global ratings
How are ratings calculated?
To calculate the overall star rating and percentage breakdown by star, we don’t use a simple average. Instead, our system considers things like how recent a review is and if the reviewer bought the item on Amazon. It also analyzes reviews to verify trustworthiness.
Top reviews

JIM DIEDRICK
5.0 out of 5 stars Most of Miller's best short stories.
Reviewed in the United States on October 12, 2019
Verified Purchase
Great short stories from one of SciFi's greatest writers. Miller can bring out more depth in his characters than
almost any other SciFi writer that I've read. His stories are thought provoking and not just simple adventures.

The book has a stupid cover though. The picture on the cover doesn't fit with any of the stories, so I'm not sure why the marketing department picked it. I painted pants on the guy with a sharpie so that I can keep the book in my living room.
Read more
4 people found this helpful
Helpful
Report abuse

RKM
1.0 out of 5 stars Wrong content
Reviewed in the United States on November 6, 2021
Verified Purchase
This includes 2 discs, labeled as such -- but they both have the same content!!
Read more
Helpful
Report abuse

gt surber
5.0 out of 5 stars Good short scifi stories by Walter Miller
Reviewed in the United States on March 14, 2016
Verified Purchase
Walter Miller is most famous for his sole successful novel "Canticle for Leibowitz" a complicated, fascinating, apocalyptic story of after the Age of Simplification. He also wrote numerous short stories published in the various science fiction short magazines of the 1950's through the 1990's. The stories are rather dark and many are also apocalyptic. They have intriguing twists of plot and do vary considerably in plot, characters, eras to be each individually interesting.

Miller's writes very well, moving the reader into the action well. The science is not too advanced for the average reader. Many of the stories have to do with human interaction and reaction to futuristic machines and situations. The book is similar to Clark's "I Robot" just not quite of the epic dimensions of that book, in that the human interactions with the machines are well documented.

Hector Cein Mandujano Canales
5.0 out of 5 stars Fun
Reviewed in the United States on June 26, 2019
Verified Purchase
Good book to read. It is composed of many entertaining short stories.
Read more
One person found this helpful
Helpful
Report abuse

'chelle
4.0 out of 5 stars Mostly Good Stories with a Few That Fall Flat
Reviewed in the United States on March 4, 2020
Miller is not an author that has a happy medium for me. When he is on, he is brilliant. The stories are classic and eternal, beautiful and true. But when he's off, the story just falls flat on its face, made decrepit by time and stereotypes. With that said, most of the stories in here are good ones.
Read more
Helpful
Report abuse

Dave Deubler
4.0 out of 5 stars Miller Delivers Thoughtful Sci-fi from the 1950's
Reviewed in the United States on May 21, 2001
As the title suggests, this book collects the best short stories and novellas of Walter Miller, Jr., the '50's science fiction writer best known for the brilliant novel "A Canticle for Leibowitz". Miller isn't overly strong on science, so none of these pieces come off as especially dated by recent discoveries, although it's interesting that so many of the technological innovations Miller foresaw have since been realized, albeit in somewhat different forms. The characterization is about what you'd expect from science fiction stories, and of the novellas, only the hero of "Darfstellar" shows real development. Nor is plotting Miller's great strength - too many of the conclusions seem obvious well before the halfway point. As a group, these stories get their punch from powerful ideas - problems that humankind has never solved, but which are likely to get worse in the future. Although Miller doesn't offer any easy solutions, his stories are intelligent and thought provoking, opening up the kind of dialogue that's necessary if these matters are ever to be settled at all. Also noteworthy are his powerful heroines. The overwhelming force of a mother's love drives the folksy "You Triflin' Skunk" and the darker "Vengeance for Nikolai", while "Anybody Else Like Me?" shows a woman driven to fight for her right to privacy. Another common theme is the question of how we define what it means to be human. Miller attacks this problem biologically in the unusual plague drama of "Dark Benediction" and the more-relevant-than-ever "Conditionally Human", and again in a more technological vein with "I, Dreamer". But while these stories are good enough in their way, Miller is most effective when describing the plight of the common workingman. Whether in conflict with technology that replaces him, or with environments that seem determined to destroy him (or at least impinge upon his freedom of action, as in "Dumb Waiter"), Miller's workingman manages to maintain his essential dignity, continues to care about his fellow man, and holds fast to the basic values that separate him from the machine. The best of these stories is "Crucifixus Etiam", in which earthmen working on the planet Mars must choose between a less miserable present and the chance to return home in the future. Miller makes us feel the hero's pain, his terror, and his longing for home, in a way that makes us wonder whether we would be able to make the harsh choices that he makes. Miller's tales often remind us that the true price of human expansion is the hard labor performed by those who are least likely to be compensated for it, and thus proves that true heroism often consists of just doing an unpleasant task that needs to be done - a lesson we should all try to learn. Miller may not be one of the grandmasters of the genre, but this book should please any fan of mid-twentieth-century science fiction.
Read more
15 people found this helpful
Helpful
Report abuse

J. L. Probert
4.0 out of 5 stars Enjoyable Classic SF
Reviewed in the United States on August 25, 2001
I haven't read A Canticle for Liebowitz or Saint Liebowitz and the Wild Horse Woman. Thus this yellow-jacketed reissue was my first brush with the fiction of Walter M Miller. Here we have 14 stories spread over 472 pages, all written between 1952 and 1957. Possibly because of this some of them seem to exhibit more than a passing resemblance to some of Philip K Dick's early short stories. In fact whether or not you like those early Dick tales will probably determine whether or not you like these. Here we have far-future communities who have returned to a Middle Ages existence coming to terms with a giant computer and its robot guardian, post-apocalyptic stories, evil aliens dealing in human cargo, plays where the entire cast is composed of robots, and the story of a world-wide plague which becomes a thinly-disguised meditation on the implications and consequences of intolerance. None of these tales offers anything new or startlingly original, but then they are over 40 years old. They're also well written delightful examples of fifties' SF. And I'll be reading the Liebowitz books when I get a chance.
Read more
8 people found this helpful
Helpful
Report abuse

Lovechef21
4.0 out of 5 stars Probably the most ridiculous book cover of any book I own, but the sci-fi is poetic, classic, and very good!
Reviewed in the United States on August 19, 2016
Unique and poetic sci-fi from--in my opinion--one of the best sci-fi writers ever. Don't let the cover scare you away.
Read more
One person found this helpful
Helpful
Report abuse
See all reviews

Jason
4.0 out of 5 stars the right stuff
Reviewed in the United Kingdom on May 11, 2012
Verified Purchase
I had real problems deciding how to rate this, because there were some stories in this that I thought were excellent but unfortunately there were also a couple which I thought were absolutely awful and dragged down the collection, especially as they were of novella length.

Walter M Miller is best known for Canticle of Leibowitz. I've read that before and was interested to see what his short stories are like. As has already been mentioned, these are SF stories written in the 1950s, and while some may not seem too original from our persepctive now, most of them date very well and I did like the philosophical bent found in many of them.

The stand-out ones for me, which fully deserve 5 stars, are The Big Hunger, Dumb Waiter, Vengeance for Nikolai, Blood Bank, and Dark Benediction (which this collection is also sometimes known as). The ones I really didn't like at all were The Darfsteller (which apparently got lots of awards at the time, so what do I know?) and The Lineman. Both of these were obviously written in the 1950s and I think have dated terribly.

But 2 duds in what is on the whole a great collection is not bad at all
Read more
One person found this helpful
Report abuse
See all reviews
Back to top
Get to Know Us
Make Money with Us
Amazon Payment Products
Let Us Help You
EnglishChoose a language for shopping. United StatesChoose a country/region for shopping.
© 1996-2022, Amazon.com, Inc. or its affiliates