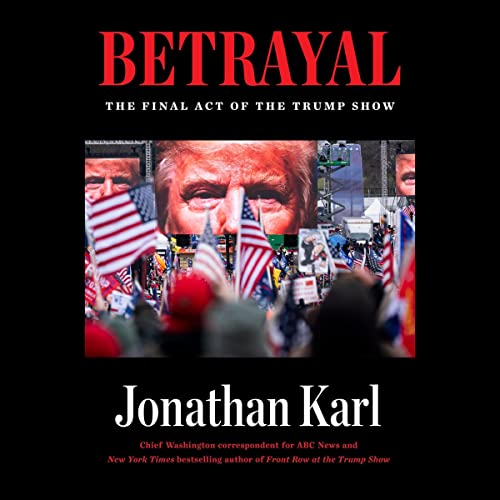 Betrayal: The Final Act of the Trump Show

Jonathan Karl (Author, Narrator), Penguin Audio (Publisher)
4.7 out of 5 stars 2,653 ratings
See all formats and editions
Sorry, there was a problem loading this page. Try again.

Picking up where the New York Times best-selling Front Row at the Trump Show left off, this is the explosive look at the aftermath of the election - and the events that followed Donald Trump’s leaving the White House - from ABC News' chief Washington correspondent.

Nobody is in a better position to tell the story of the shocking final chapter of the Trump show than Jonathan Karl. As the reporter who has known Donald Trump longer than any other White House correspondent, Karl told the story of Trump’s rise in the New York Times best seller Front Row at the Trump Show. Now he tells the story of Trump’s downfall, complete with riveting behind-the-scenes accounts of some of the darkest days in the history of the American presidency and packed with original reporting and on-the-record interviews with central figures in this drama who are telling their stories for the first time.

This is a definitive account of what was really going on during the final weeks and months of the Trump presidency and what it means for the future of the Republican Party, by a reporter who was there for it all. He has been taunted, praised, and vilified by Donald Trump, and now Jonathan Karl finds himself in a singular position to deliver the truth.

4.7 out of 5 stars
4.7 out of 5
2,653 global ratings
How are ratings calculated?
To calculate the overall star rating and percentage breakdown by star, we don’t use a simple average. Instead, our system considers things like how recent a review is and if the reviewer bought the item on Amazon. It also analyzes reviews to verify trustworthiness.

Frank Luntz
5.0 out of 5 stars The Best Political Book of 2021
Reviewed in the United States on November 16, 2021
Verified Purchase
If you want all the facts and none of the typical hype or editorializing, Jon Karl’s Betrayal is the best Trump book I’ve read.

What sets this book apart is the commitment to accuracy rather than ideological philosophy. Every moment he writes about is, at a minimum, double-sourced and triple checked. There’s no “some people have said” claims anywhere. This is what really happened, as told by the people who made it happen.

Similarly, everyone who mattered in the Trump Administration is on-the-record – starting with Donald Trump himself. All the key players are interviewed, and readers get a refreshing chance to hear their exact words rather than a reporter’s summary. Equally important, he had unprecedented access to the President, and he gives Trump every opportunity to refute his critics point-by-point.

There are five stories, told moment by moment by the people involved, that make this book so essential:

First, the events of January 20th itself – exclusive to this book. As the President was departing the White House on Air Force One, for his final trip as president, Trump told the Chairman of the Republican Party that he was quitting the GOP and forming his own party. Karl details how the GOP leaders fought back, and why Trump reversed himself a week later.

Second, and again a Betrayal exclusive, the real reason Trump announced he wouldn’t attend joe Biden’s inauguration was that he’d learned Mitch McConnell intended to uninvite him. To avoid embarrassment of being the first ex-president ever disinvited, Trump sent his very last tweet, saying he had decided not to attend. Trump vehemently denies this – but Karl lays out the facts.

Third, and in some ways most important, Betrayal explores the relationship between Trump and Mike Pence in the days leading up to January 6th. For the first time in print, you get to hear both sides of the conflict from the people themselves – the public and private pressure Trump and his Administration put on his VP not to certify the election, and how Pence really felt about the events of January 6th. Warning: some of the language here is graphic.

Fourth, Trump lays out exactly what he thought about his staff, his cabinet, his “allies” on Capital Hill – everyone. You’ll get to hear him unplugged, unfiltered and unedited – in his own words. But you’ll also learn just how many people who served the President walked (or ran) away in fear or disgust – particularly after Election Day 2020.

And fifth, you don’t have to wait for the results of the Congressional Select Committee reviewing the events of January 6th. Every frightening moment of what actually happened in and around the Capitol is covered in Betrayal – including the untold stories and heroic efforts by Capitol security to keep Members safe.

When it comes to Donald Trump, no book will satisfy everyone. But if you want to know exactly what happened behind the scenes, behind the cameras, and behind closed doors – and what people making the decisions really thought – Betrayal comes closer than any other.
Read more
429 people found this helpful
Helpful
Report abuse

linda galella
HALL OF FAMETOP 10 REVIEWERVINE VOICE
2.0 out of 5 stars TMZ in book form
Reviewed in the United States on November 16, 2021
Verified Purchase
Unlike his last book, “Front Row at the Trump Show”, Karl makes no attempt to make an unbiased presentation with “Betrayal”. It reads like a grocery store rag and is full of the same stuff and banners that CNN & MSNBC had been touting for months on end. Karl retired his news reporter shingle and has fully embraced the infauxtainment biz, highly evident in this, the supposed “Final Act of the Trump Show”.

For a reporter that has followed Trump for so long and has been given so much access, I really expected something new and insightful. Karl’s regular incredulity comes off as false as it can hardly be naive. I found this entire read frustrating and annoying as yet another reporter succumbs to rhetoric.

Audrey Shaff
5.0 out of 5 stars Frightening and Enlightening
Reviewed in the United States on November 16, 2021
Verified Purchase
This book will keep you on the edge of your seat as you realize how close we came to losing it all. It’s riveting.
Read more
187 people found this helpful
Helpful
Report abuse

RTM
TOP 500 REVIEWERVINE VOICE
5.0 out of 5 stars Important and New Information and Insights
Reviewed in the United States on November 16, 2021
Verified Purchase
Veteran reporter Jonathan Karl gives readers a behind the scenes look at the last year of the Trump Admin. Although this subject has been covered in other recent books, Karl provides information and insights I have not seen before. The above review by Frank Luntz gives an excellent summary about these, so I will not repeat this. However, I will reinforce the importance of Karl's reporting about the efforts by Trump and his allies to overturn the election results in order to stay in power. Far from being a political stunt, this effort was serious and might have succeeded if not for the integrity and bravery of some key officials. In addition, Karl also provides one of the best accounts I have yet read about the events at the US Capitol on January 6, 2021. Karl describes in chilling detail the fear experienced that day by many Congress persons and their staffers, as well as the role played by Trump and some of his aides. Despite the highly controversial nature of the topics covered in his book, Karl does seem to be objective in his research and reporting, using mostly on the record interviews and sources. Overall, I highly recommend this book as important history, as well as a "wake up call" about how fragile our democracy actually is.
Read more
149 people found this helpful
Helpful
Report abuse

MaryAnn
5.0 out of 5 stars Betrayal is even Better than Front Row
Reviewed in the United States on November 16, 2021
Verified Purchase
As much as I loved “Front Row at the Trump Show,” “Betrayal” is even a level higher, in terms of readability, importance, and historical value.

This is an easy, breezy read, but the book also oozes gravitas. The content is so ample that historians just may be referring to Betrayal 100 years from now when studying this awful mess.
Read more
131 people found this helpful
Helpful
Report abuse

R. Patrick Baugh
TOP 1000 REVIEWER
5.0 out of 5 stars The final 2020 election book?
Reviewed in the United States on November 16, 2021
Verified Purchase
A great follow-up to “Front Row”, from a political reporter who may know Trump better than any other reporter. Lots of inside scoop on the 2020 election and the January 6 storming of the Capitol.
Read more
120 people found this helpful
Helpful
Report abuse
See all reviews

Barbara Clark
5.0 out of 5 stars Excellent, interesting and informative.
Reviewed in Canada on December 31, 2021
Verified Purchase
Well researched much detail abt the Trump behavior, attitude, priority and the boot lickers without conscience. Some details that were not in the other many Trump books. It is a great puzzle how a presidental candidate is not investigated and closely inspected and assessed for crimes and bankruptcy and morals before being allowed to run for such an influential position in government. The Most common of jobs require more assessment and, job qualifications etc. than when being allowed to run for the job of managing a whole county it seems. Anyway this book is a good and informative read.
Read more
Report abuse

Martin Taylor
5.0 out of 5 stars Wow how close Americans came to an Authoritarian Dictatorship
Reviewed in Canada on November 27, 2021
Verified Purchase
If only half of this book was proven true it is your Democracy hangs by a thread,Trump didn’t succeed this time but almost did.it’s an edge of your seat book and hard to put down I finished it in 2 days and will read it again as it always seems better on the second read.Grab it you won’t be disappointed.
Read more
One person found this helpful
Report abuse

Joan Macleod
5.0 out of 5 stars A Loser Whines!
Reviewed in Canada on December 15, 2021
Verified Purchase
Trump will go down in history as the biggest whining loser who acted like a spoiled brat and all that continue to bow down to him will also find history will not be kind to them.
Read more
One person found this helpful
Report abuse

Richard K. Brummer
5.0 out of 5 stars Essential reading for every American
Reviewed in Canada on December 22, 2021
Verified Purchase
Anyone who cares about democracy has to read this.
Read more
One person found this helpful
Report abuse
See all reviews
Back to top
Get to Know Us
Make Money with Us
Amazon Payment Products
Let Us Help You
EnglishChoose a language for shopping. United StatesChoose a country/region for shopping.
© 1996-2022, Amazon.com, Inc. or its affiliates