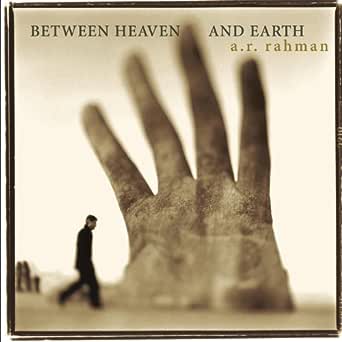 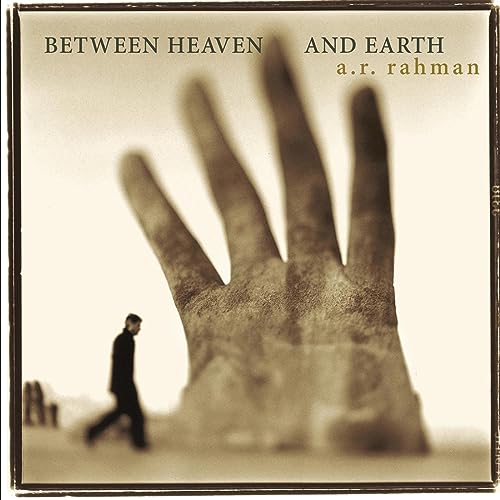 Between Heaven and Earth

Listen Now
Buy MP3 Album $9.99
Your Amazon Music account is currently associated with a different marketplace. To enjoy Prime Music, go to Your Music Library and transfer your account to Amazon.com (US).

4.7 out of 5 stars
4.7 out of 5
13 customer ratings
How does Amazon calculate star ratings?
Amazon calculates a product’s star ratings based on a machine learned model instead of a raw data average. The model takes into account factors including the age of a rating, whether the ratings are from verified purchasers, and factors that establish reviewer trustworthiness.
Top Reviews

S. Ferguson
5.0 out of 5 stars The Genius of the Heart
Reviewed in the United States on June 18, 2004
Verified Purchase
Although I am a native American who grew up in Texas on Lightin' Hopkins and Ray Charles, with a diverse taste in music from Mozart to Bill Evans to Emmy Lou Harris, I now listen primarily to A.R. Rahman - and frankly have just about lost interst in any other music.
Rahman is the genius of melody and subtle percussion. His music has evolved out of India, but it also comes from what must be his personal enormous heart-felt love for all of life, humanity and God. His grasp of the eternal and the transcendental in melody will bring tears to your eyes and long lost feelings into your heart.
Rahman is a superstar composer worldwide, loved by literally millions, and appreciated by great musicians in every country all over the planet. I'm delighted SONY has released this, because not only is it breathtaking, magical music that draws you into far away exotic realms, but it is commercially accessible to us as westerners and perhaps it will introduce many more to the Genius of the Heart - A.R. Rahman.
I can't say enough good things about his music. Look him up on the internet - there are dozens of websites devoted to him, his music, and his remarkable life. A modern day Orpheus, India's Mozart - Awesome!

Amit
5.0 out of 5 stars Awesome
Reviewed in the United States on October 15, 2008
Verified Purchase
What can you expect from a genius? A matchless performance! Hence, when the music wizard of India, A R Rahman, who is indeed a master of instrumentals, delivers and album that is chiefly instrumental-oriented, you just have to listen to it and get mesmerized by the power of his music. To the best of my knowledge, this album is not available in India (surprisingly), hence, when I saw it on Amazon, i ordered it without a second thought. Listening to this tunes have been a great experience, especially the 'warriors of peace' and 'dacoit duel'. A must have for not only a Rahman fan, but also for anyone who likes instrumentals.
Read more
5 people found this helpful
Helpful
Comment Report abuse

Lauretta Lancaster
3.0 out of 5 stars Ok
Reviewed in the United States on March 29, 2019
Verified Purchase
It was okay I thought that this artist was better than what this CD portrays but it's still an nice CD
Read more
Helpful
Comment Report abuse

P. Trueax
5.0 out of 5 stars Beautiful Music - Highly Recommended
Reviewed in the United States on April 12, 2009
Verified Purchase
Purchaed this CD and am very pleased. The music is beautiful, soothing, uplifting and highly recommended. This was my first A.R. Rahman cd and have purchased others by him, but this one ranks as the best in my book. Some of it is just instrumentals and others have singing. All beautiful asian language pieces are very good. Can't go wrong, The Czech Symphony performed flawlessly.

Vivek Gupta
5.0 out of 5 stars Great blend of music
Reviewed in the United States on December 13, 2009
Verified Purchase
We bought this after purchasing another CD of music by A. R. Rahman since it sounded interesting. We were right it was an interesting CD and the blending of different styles of music really worked well. I look forward to other CDs by A. R. Rahman
Read more
2 people found this helpful
Helpful
Comment Report abuse

Lulu
5.0 out of 5 stars soft and beautiful
Reviewed in the United States on July 7, 2013
Verified Purchase
If you are looking for music- no signing just beautiful music to listen to- this is a great, relaxing cd.
Read more
One person found this helpful
Helpful
Comment Report abuse

HaNa FalKo
5.0 out of 5 stars Musical!
Reviewed in the United States on October 27, 2011
Verified Purchase
I got the international version of 'Warriors Of Heaven & Earth' but I wanted this CD so much
yet I bought it for my satisfaction.