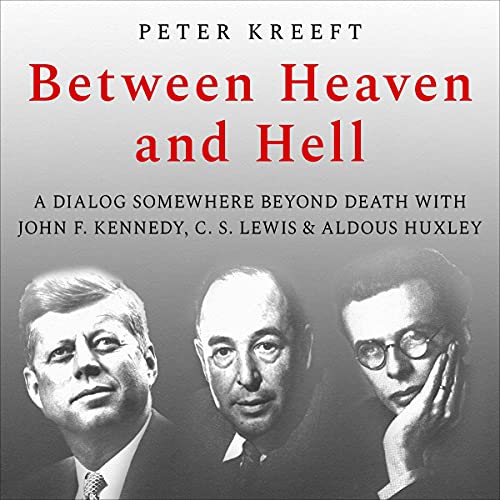 On November 22, 1963, three great men died within a few hours of each other: C. S. Lewis, John F. Kennedy, and Aldous Huxley. All three believed, in different ways, that death is not the end of human life. Suppose they were right, and suppose they met after death. How might the conversation go? Peter Kreeft imagines their discussion as a part of The Great Conversation that has been going on for centuries. Does human life have meaning? Is it possible to know about life after death? What if one could prove that Jesus was God? With Kennedy taking the role of a modern humanist, Lewis representing Christian theism and Huxley advocating Eastern pantheism, the dialogue is lively and informative. This new edition of this classic work includes a postscript in which Kreeft describes why and how he wrote what has remained a standard of apologetic literature for a generation. He also adds an outline and index to the book, as well as a never-before-published dialog in which he imagines "A World Without an Easter". Now more than ever, this book offers an animated interaction that involves not only good thinking but good drama.

2 free audiobooks are waiting
Learn more about membership
List Price: $29.99
You Save: $14.00 (47%)
By completing your purchase, you agree to Audible’s Conditions Of Use
Sold and delivered by Audible, an Amazon company
Share

Kendal Brian Hunter
5.0 out of 5 stars Dead men tell no tales.
Reviewed in the United States 🇺🇸 on November 17, 2001
Verified Purchase
The Overview:
This is one of a recent slew of books that deal with hypothetical conversations between great people, such as Ravi Zacharias's "Lotus and the Cross" which is a conversation between Jesus and Buddha, or Truman Madsen's "Five Classics" which has a hypothetical conversation between Joseph Smith and a mother with a blind baby. They provide a vehicle for translating the philosophy into practical reality of day-to-day life and pain.
Of course the godfather of all these dialogues is Plato. The power and charm of this method of presentation is that it takes what is oftentimes an ethereal philosophical concept and translates it to realistic situations, such as the price of tomatoes or why I am hurting.
The Idea:
Due to an odd coincidence, President John F. Kennedy, Dr. C. S. Lewis, and Aldous Huxley died on the same day: 22 November 1963. Dr. Kreeft imagines what happens in the afterlife as these three men meet and interact. In a Socratic sense, Kreeft uses these three men to elaborate the three types of Christianity present today: Lewis and the traditional Christianity; Kennedy and the modern Christianity; and Huxley and the mystical Christianity.
The real question behind all of the words and wrangling is the divinity of Christ. When that doctrine goes, everything else uniquely Christian soon falls, so the afterlife discussion is of capital importance for Christians. We allow people the freedom to believe whatever they want to believe, but there is commitment to the truth along with the commitment to good feelings and respect for other people.
The main thrust of the book is to show by logic that Christ was in fact divine. These arguments are great apologetic scaffolding prior to gaining a personal witness. We sometimes get caught up in the idea that religion is solely and affair of the heart, but this book reminds us that God also gave us a brain, and that has a bearing on how and what we worship.
By the way, Gov. Jesse Ventura once remarked "Organized religion is a sham and a crutch for weak-minded people who need strength in numbers." I wonder how well and how long the Hon. Gov.
Ventura would stand in a debate with Dr. Peter Kreeft?
The Book:
The prose is an easy read. Peter Kreeft is one of these rare people who combine laser logic with righteous wit! That is what makes this book not only challenging but enchanting.
The text is formatted like a script or play, so it is easy to keep track of who is talking and you can keep the characters and ideas straight. I guess if he wanted to, this book could make a frictionless transition to TV or VHS. The story is presented in one long act, with ample sidebar summaries to help you keep the arguments ordered, although I wonder if it would have been better to divide the text into scenes or acts to help punctuated the discussion.
The cover-art is classic, and I hope they keep the same picture on every edition--it helps to see these three great men together as we weigh their ideas and viewpoints.
My religion (Church of Jesus Christ of Latter-day Saints) does not have a strong apologetics tradition per se: we say, "If any of you lack wisdom, let him ask of God" (James 1:5), and be honest with the answer you get to your prayer. So it was fascinating to read the book and understand the sophisticated logic behind what Kreeft another others believe, the logical reason why he believes in the divinity of Christ.
Read more
10 people found this helpful
Helpful
Report abuse

J. Fallon
5.0 out of 5 stars Extremely Creative and Vivid
Reviewed in the United States 🇺🇸 on May 26, 2009
Verified Purchase
I enjoyed this book very much. Peter Kreeft is a brilliant creative writer that captures the essence of all three men in Between Heaven and Hell. Those three men being:

C.S. Lewis - A Professor of Mid Evil and Renaissance Literature at Oxford and Cambridge University. He wrote more than thirty books in his life, most of them having to do with (or symbolically related to) Divine philosophy and theology. Most popular among them are  The Chronicles of Narnia Movie Tie-in Box Set Prince Caspian (rack) , Mere Christianity , The Screwtape Letters: Letters from a Senior to a Junior Devil , Surprised by Joy: The Shape of My Early Life , and  The Great Divorce

Aldous Huxley- Was a renowned British Universal Writer/Philosopher. He spent most of his life writing novels, short stories, and film scripts. His book mostly having to do with the relations of "Between Heaven and Hell" is  The Perennial Philosophy: An Interpretation of the Great Mystics, East and West (P.S.)  He is also very famous for his philosophy of taking psychedelic drugs to connect with the divine. Huxley was a sort of Hunter S. Thompson of his generation.

What do these three have in common? They all died on November the 22nd 1963. This book is a speculation of these three men meeting in the afterlife, and discussing various religious philosophies.

The towering argument in this book is on the Deity of Jesus Christ. Was He God, or man, or both, or not at all?

Overall a very enjoyable, thought provoking book that in my opinion really captures the characters of these men, and the things that they would have/might have said on the divine had this situation really come about. Reading this book I felt as though I was propelled back to C.S. Lewis's  The Great Divorce as these two books have enormous similarities on the subject of afterlife speculation.
Read more
23 people found this helpful
Helpful
Report abuse
See all reviews

trike99
3.0 out of 5 stars Buy for the Theology, not the playwriting
Reviewed in the United Kingdom 🇬🇧 on December 3, 2021
Verified Purchase
The author does not pretend for a moment that he is a playwright thereby it lacks the ease, obscurity and frequent mundanity of human interaction and connection. However, he is clearly a well-versed theologian and in that respect it is very informative and at times even entertaining. Don't buy this if you wish to read a play, but an intellectual exercise in "what if".
Read more
Report abuse

T J Wexford
5.0 out of 5 stars Excellent
Reviewed in the United Kingdom 🇬🇧 on June 3, 2019
Verified Purchase
Well worth the investment of time and effort to read and understand. Strongly recommend to all those who are committed to saving their soul.
Read more
Report abuse

T Curtis/ E Curtis
5.0 out of 5 stars Very thought provoking, raises one's thinking
Reviewed in the United Kingdom 🇬🇧 on December 16, 2013
Verified Purchase
Follows the method used by Socrates in debating points. Brings out many telling points about the divinity of Christ and the danger of falling into the trap of humanitarian secularism which is like being a Christian without Christ or having Christmas without Christ.
Read more
2 people found this helpful
Report abuse

JohnA
4.0 out of 5 stars Good one!
Reviewed in Australia 🇦🇺 on April 13, 2014
Verified Purchase
Excellent read.

Some of the references to other philosophies and authors passed me by but it was interesting to read the views of Huxley and Kennedy as presented.

For me, a slim volume is easier to read than an extended debate.
Read more
Report abuse
See all reviews