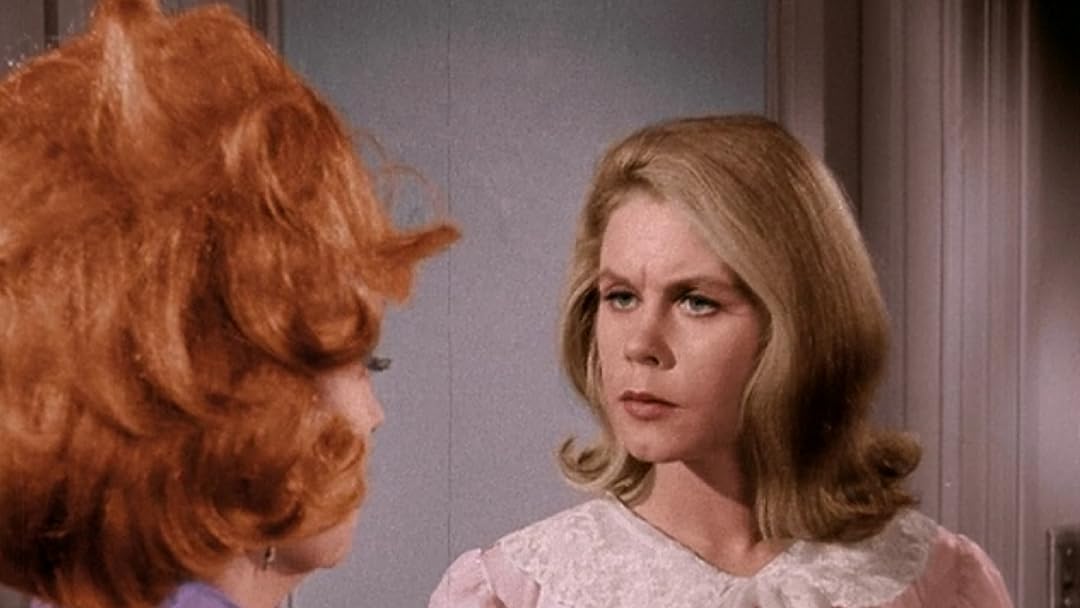 (981)
7.61965X-RayALL
BEWITCHED stars Elizabeth Montgomery as Samantha, an average, everyday housewife, mother... and witch. Her husband is Darrin (Dick York/Dick Sargent), ad agency executive, harried husband and mere mortal. The marriage between this lovable witch and bumbling human is nothing short of hilarious. Their lives are complicated by Endora (Agnes Moorehead), the world's witchiest mother-in-law. Despite having promised Darrin never to use witchcraft, Samantha often finds that slipping in a little magic is unavoidable in this beguiling and bewitching comedy.

Mark MywordReviewed in the United States on August 4, 2017
2.0 out of 5 stars
Some like this colorized stuff-- I DO NOT! Glad I found a B&W version of both seasons 1 and 2.
Verified purchase
I'm grateful that before I bought the 2nd season, I found an edition of both seasons 1 AND 2 in the original BLACK AND WHITE. I am a purist when it comes to the TV I watch (ed) and I KNEW something wasn't right looking at the "colorized" season 1 I had already bought.The purple cat in the credits, the hues and shadings---I just remembered it in the original B&W and I'm sorry I didn't find the 1 and 2 set FIRST. I know the later seasons were in color; but I watch more TV in B&W now than I have since the 1950's and 1960's--call it going through a second childhood or whatever you want--I call it loving watching things today through the same eyes I saw things over 50 years ago! This version isn't bad if you didn't grow up with the original B&W... but if you did, you can't help but notice the change--some will like it---*I* did not! Glad I'll be getting 1 & 2 in B&W pretty soon... loved the series and with all due respect to Dick Sargent, Dick York was the quintessential "Durwood!" :)
33 people found this helpful

Honest OneReviewed in the United States on June 2, 2021
5.0 out of 5 stars
The Series that may have never Happened.
Verified purchase
Most everyone remembers Bewitched fondly for it's light hearted comedy, charismatic cast and colorful guest stars. What many of us don't realize is how close the series came to never happening at all ! Neither Elizabeth Montgomery or Dick York were the networks first pick to star as the main characters. The ABC network really wanted stage actress Tammy Grimes and TV fans favorite Richard Crenna. (SEE PICS) However, both stars found the two roles offered less than appealing than other projects they were considering and respectively declined. Rehearsals for the pilot episode of Bewitched began on November 22, 1963 — just hours before the assassination of President John F. Kennedy. The tragedy was particularly difficult for the show’s star, Elizabeth Montgomery and her husband, the show’s producer, Bill Asher. Both were good friends of JFK and the First Family. In fact, Bill Asher produced Kennedy’s birthday bash in 1962 where Marilyn Monroe sang famously ‘Happy Birthday, Mr. President' at a star studded salute at Madison Square Garden. However, any delays in rehearsals subject to grief might have delayed the series premier in 1964 or the series being made at all. Consequently, the rehearsals went on as scheduled. (SEE PIC) Controversy also surrounded the series premiere. Bewitched was protested by extreme religious groups and overprotective parents throughout the country who chose to boycott Bewitched before it even aired. Why? They believed it would promote Devil worship, black magic and the practice of witchcraft. (SEE PIC) This concern focused primarily around the series viewer base which would likely comprise a younger audience. That cloud of suspicion remained around the series and its timeslot throughout it's eight year run. However, anyone who ever saw the series knows it's the farthest thing from the truth. The series ended it's first year run ranking number 2 in the AC Nielsen's ratings. Only Bonanza was ranked higher at number 1. Surprisingly Bewitched received no Emmy Award nominations for it's first season. However, the accolades to follow would later make up for the obvious snub. When the series ended in 1972 Bewitched earned 32 Emmy Award nominations and 13 wins. Bewitched once held the record for the longest running fantasy genre show at eight years with two hundred fifty-four episodes. This wasn't broken, but tied by Charmed (1998) with eight years, but only one hundred eighty episodes, and Smallville (2001) with ten years and two hundred seventeen episodes.
However, still neither of those series broke the two hundred fifty-four episode record. Not bad for a series which some believe may never have happened. However, for the millions of fans out there I'm sure I speak for all of them . We're so happy that it did.
5 people found this helpful

Brent MayberryReviewed in the United States on September 25, 2018
4.0 out of 5 stars
Colorized First Season Detracts from the Show's Overall Charm
Verified purchase
This show is sweet and funny and the drama between witches and mortals is kept at a minimum.

In later seasons, from what I remember, Darrin gets a bit more crazed as the show ups the ante with the hijinks, the poor guy.

For some reason this first season is colorized, which I personally don't like. There's nothing wrong with good ol' black-and-white.

Scott SatelliteReviewed in the United States on November 23, 2014
5.0 out of 5 stars
Black and White Original Version or Color Version? I say get both!
Verified purchase
Okay, I'll admit when I'm wrong and boy was I wrong about this. When the colorized versions of Bewitched came out I was horrified and said I'd never watch or buy them, I only wanted the black and white versions, as the show was originally shown. HOWEVER as a student of mid-century modern design, my curiosity got the best of me and I just had to know what colors were used for the sets during the first two years of the show. I still like the black and white versions best but I've enjoyed the color versions immensely. The colorization isn't perfect but for those of us who have been dying to know what color everything was, this is a priceless resource.

The only thing that really, really aggravates me (and this applies to the black and white versions as well) is the fact that Sony cut off the original Screen Gems credits at the end for seasons 1-5. To me this is as integral as opening or closing credits and should not be messed with under any circumstances. If the current owner wants to ADD credits up front or at the end, I can see that, but never should anything that was part of the original broadcast be removed. Sony seems to have gotten some feedback on this as later release seasons do have the Screen Gems credits at the end intact. I wish the earlier seasons would be released in their entirety with the Screen Gems credits appropriate to each year restored.
16 people found this helpful

marcelharpinReviewed in the United States on December 17, 2017
5.0 out of 5 stars
Bewitched was and still is pure and unrelenting entertainment !
Verified purchase
To me bewitched is a great little pink and fluffy sitcom you can easily get lost in. It is laced with great writing, acting and stories which have proven to be timeless. Indeed, it would seem that forty-something years on the air has not diluted its core themes or messages or even charm in the slightest – this is a truly perpetual piece and one that will go on and on
12 people found this helpful

Kipp LeyserReviewed in the United States on July 30, 2014
5.0 out of 5 stars
Groundbreaking 1960s Sit-Com Classic!
Verified purchase
Bewitched was a groundbreaking, clever, unique, situation comedy that gently addressed our radically changing social and cultural values during the turbulent 1960s. The show first aired in the Fall of 1964 and reflects a world still untouched by the changes that are beginning to rock our Western world. By series end in 1972, the show reflects a social order closer to what we know today. Samantha (Elizabeth Montgomery) is a beautiful witch who falls in love with Darrin (played by Dick York, and later in the series, Dick Sergeant). Darrin tells Samantha he just wants a "normal" marriage. He's the breadwinner. He provides whatever is needed. She is the 'good wife' who stays at home and in her place. He asks her to suppress her true nature and not express her witches powers because that's what 'normal' looks like in Darrin's "mortal' culture. Samantha's mother, Endora (Agnes Moorehead) is infuriated that anyone would attempt to control her daughter and force her to suppress her true nature and gifted abilities evem though Samantha says it's her choice to do so. From there, the calamity of differnt world views collide. Throughout the series, Darrin, along with hysterical neighbor Gladys Kravitz and many others meet the ever more diverse members of Samantha's family and learn sometimes happily and sometimes reluctantly that we live in a colorful world of diversity and non-conformity.
6 people found this helpful

PennfieldReviewed in the United States on May 31, 2014
5.0 out of 5 stars
One of TV's Best Casts
Verified purchase
BEWITCHED is a television classic with well developed, likable characters, great comedy, and the universal theme of hiding some aspect of your personality from the world. Wonderful writing and plots enhance season one. A dream cast of extremely talented actors: beautiful, classy Elizabeth Montgomery; versatile movie veteran Agnes Moorehead; everyman Dick York; exasperated and funny George Tobias; playing Darren's social climbing snobby mother is the delightful Mabel Albertson; hilarious, sweet, lovable Marion Lorne as Aunt Clara; and one of the best comedy actresses of all time--creating one of television's most memorable characters, the nosy, clueless Gladys Kravitz. Rarely has such a gifted group made lightning in a bottle on television. Buy this and pay homage to the show by visiting the statue of Elizabeth Montgomery in Salem, MA!
4 people found this helpful

J. MooreReviewed in the United States on December 19, 2012
5.0 out of 5 stars
This show is still funny after 48 years of premiering
Verified purchase
I loved this show when it was on tv in the late 80's and early 90's as a kid. Back then I loved the magical part of the show but now I like it more for the humor and all the cool cars and gadgets they had back than that we don't have today. It also makes me wish America was still like this,it had to be a great time to be alive.
I wish the family unit was still this way as well. A Mom and a Dad living in the same house, married and loving each other. Darrin went to work and Samantha stayed home to take care of their house and children. He made enough to support them and they had no big worries about a job or money. It just seems like a better time than this crappy 21st century where the economy sucks, no jobs, and the family unit is in disarray. God I wish I could go back to that time, I should of been born in the 40's when America was still great.

Well besides my romanticizing the 60's this show is still really good after all that time and I plan on getting all 8 seasons. They don't make shows like this anymore, every things cookie cutter today and utter garbage.
13 people found this helpful
See all reviews
Back to top
Get to Know Us
Make Money with Us
Amazon Payment Products
Let Us Help You
EnglishChoose a language for shopping. United StatesChoose a country/region for shopping.
© 1996-2022, Amazon.com, Inc. or its affiliates