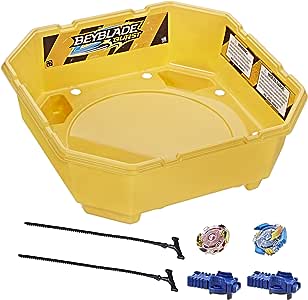 Toys parents shopped for
Explore toys by age, from birth to 12 years and up Explore now

Each top consists of an Energy Layer, Forge Disc, and Performance Tip that players can mix and match to try to find the best Beyblade Burst top combination. Tops can "burst" into pieces during battle, resulting in 2 points for the player left standing (burst rates vary). First player to earn 3 points wins!

Beyblade Burst toys are for kids ages 8 years old and up. This battle pack makes a great gift for fans of the anime series and kids who are new to Beyblade Burst battling as they begin their journey toward Beymastery.

Hasbro and all related terms are trademarks of Hasbro.

Warning: Choking Hazard -- small parts. Not for children under 3 years

4.3 out of 5 stars
4.3 out of 5
657 customer ratings
How does Amazon calculate star ratings?
Amazon calculates a product’s star ratings based on a machine learned model instead of a raw data average. The model takes into account factors including the age of a rating, whether the ratings are from verified purchasers, and factors that establish reviewer trustworthiness.

Daniel V. Reilly
VINE VOICE
4.0 out of 5 stars Loads of Fun, but Potentially Dangerous
Reviewed in the United States on January 23, 2017
Vine Customer Review of Free Product( What's this? )
My seven-year-old son asked for, and received Beyblades for Christmas, and, against my better judgment, I do have to say that I enjoy battling with him. He, of course, is obsessed with Beyblades, so when I saw this Beyblade Burst arena, I jumped right on it.

First off, Beyblade Burst is much more fun than regular Beyblade. The tops are pretty heavy, so you get a lot of good, exciting combat. the arena has a pit in each corner, and holes along the edges, which add to the challenge. And watching your opponent burst apart into three pieces is pretty thrilling.

The warning sticker in the arena basically says "STAND THE HELL BACK! YOU CAN GET HURT!". The middle piece of each top is metal, and these things can FLY if they burst apart when they're spinning fast. DO NOT put this arena at eye level, such as on a table, and do not lean over the arena to get a better look at the battle. We've had this arena for three days, and I have numerous bruises and blood blisters on my fingers from getting whacked by the exploding tops, and/of having my son launch them directly onto my fingers. Yesterday, one exploded so hard that the top piece soared three feet into the air and cracked my son right in the middle of his forehead. He looked like it hurt him, but I think he played it cool out of fear that I would take the arena away and ban Beyblades if he were actually hurt.

Captain Marvel
5.0 out of 5 stars Great fun
Reviewed in the United States on June 9, 2018
Verified Purchase
My son can't get enough of this somehow that bayblades series came up in his Netflix feed and it was game over I got nagged into getting this. But it is fun to use with him. He is 4 I see a lot of the older elementary kids carrying them around. A hit with everyone. These have metal parts I make him wear safety glasses because he is on the smaller side and when it breaks apart he has been hit in the face. Nothing serious just fyi for the littles who insist on this.
Read more
5 people found this helpful
Helpful
Comment Report abuse

CBornstein
3.0 out of 5 stars Not what expected
Reviewed in the United States on January 6, 2018
Verified Purchase
Given to nephew as a gift. Not the best hand launchers. My son has a variety of Beyblades and the launchers in this set feel flimsy. In my opinion, it was too expensive for what you get.

My son loves the Beyblades, so these fancy tops are fun to play with. I just don’t think the ones included are the best.
Read more
7 people found this helpful
Helpful
Comment Report abuse

Toni-Rai Pitre
1.0 out of 5 stars Don’t buy
Reviewed in the United States on December 22, 2017
Verified Purchase
The box came with a nice size hole because it was not out in another box to avoid damage. There was also the shipping label smack in the middle of the box. This is a gift how am I going to give this with the shipping label smack in the middle and the box all messed up!
Read more

dosgatosnegros
1.0 out of 5 stars Beys do not stick to launcher
Reviewed in the United States on August 12, 2017
Verified Purchase
We are experienced beybladers here. My son has many of the older style beyblades and has gotten hours of enjoyment from them. We bought this set for my nephew and were really disappointed. The beys do *not* stick onto the launchers no matter what we did. It rendered the product useless. The launchers also felt very chintzy and low quality compared with our older style launchers. I do not recommend this product and will be looking into returning the set we bought. Stick to the older style beys!
Read more
13 people found this helpful
Helpful
Comment Report abuse
See all reviews from the United States

SarahC
1.0 out of 5 stars Came broken, twice.
Reviewed in Canada on June 19, 2017
Verified Purchase
The first item came broken. One of the beyblades didn't work correctly, and didn't spin. Instead of returning it, I just asked for a replacement, but the second one came broken as well! My nephew was crying and very disappointed. Overall, the quality was poor anyway. Not work the price.
Read more
4 people found this helpful
Helpful
Sending feedback...
Thank you for your feedback.
Sorry, we failed to record your vote. Please try again
Report abuse

Alex Seath
2.0 out of 5 stars Nice to look at.
Reviewed in Canada on June 4, 2017
Verified Purchase
Bought this for my sons 7th birthday. He was over the moon until he tried playing with it. The launchers dont hold the beyblades. They just fall off it, they dont lock on. Both launchers in the package do the same thing. My other son has a single beyblade and launcher and it works just fine.
Read more
4 people found this helpful
Helpful
Sending feedback...
Thank you for your feedback.
Sorry, we failed to record your vote. Please try again
Report abuse

Karl Dulnuan
1.0 out of 5 stars Bey blades doesnt stick to launcher
Reviewed in Canada on April 17, 2018
Verified Purchase
Terrible, terrible product quality with a good intention to make some kid happy. Bought and returned. As other people here has experienced, the bey blade doesnt stick to the launcher so when you launch it, it will just fall without spinning. Question is, why is this still listed in amazon?
Read more
Helpful
Sending feedback...
Thank you for your feedback.
Sorry, we failed to record your vote. Please try again
Report abuse

MTG
5.0 out of 5 stars Not a rip-off!
Reviewed in Canada on October 26, 2018
Verified Purchase
This was not a rip-off! I am very proud of the person who sold this! It came right at my door! Thank you whoever sold this! My son was very excited to unbox this. I have a question, if Valtryek wont spin good, why will Spryzen?
Read more
Helpful
Sending feedback...
Thank you for your feedback.
Sorry, we failed to record your vote. Please try again
Report abuse

M. Ashe
5.0 out of 5 stars Good starter kit
Reviewed in Canada on December 13, 2018
Verified Purchase
Was perfect for a starter kit to make sure son actually liked bey blades. Fun to battle with the parents. The arena isn’t thick or heavy it’s just a light plastic but has been very durable.
Read more
Helpful
Sending feedback...
Thank you for your feedback.
Sorry, we failed to record your vote. Please try again
Report abuse

Raspberry Lover
4.0 out of 5 stars Decent
Reviewed in Canada on June 13, 2018
Verified Purchase
It’s good for what it is. You could also use a Rubbermaid bin but you just wouldn’t get the divots in the corners. We first accidentally ordered the micro mini stadium which is tiny and I don’t recommend but if your kid is set on getting one of these, this is the biggest one I could find.
Read more
Helpful
Sending feedback...
Thank you for your feedback.
Sorry, we failed to record your vote. Please try again
Report abuse
Load more international reviews

Tracey Davies
4.0 out of 5 stars So much fun..
Reviewed in Canada on December 30, 2016
Verified Purchase
So much fun....Dads and Sons had a good time Christmas morning. The Beyblade launchers that come with this starter set are not as easy for little hands as the white plastic launchers that come with the most expensive beyblades
Read more
One person found this helpful
Helpful
Sending feedback...
Thank you for your feedback.
Sorry, we failed to record your vote. Please try again
Report abuse

Page 1 of 1 Start overPage 1 of 1
This shopping feature will continue to load items when the Enter key is pressed. In order to navigate out of this carousel please use your heading shortcut key to navigate to the next or previous heading.
Back
Next
Pages with related products. See and discover other items: all beyblade, all hasbro games, wall games, Beyblade Arena, beyblade battles, best beyblades