Beyond 1917: The United States and the Global Legacies of the Great War 1st Edition, Kindle Edition 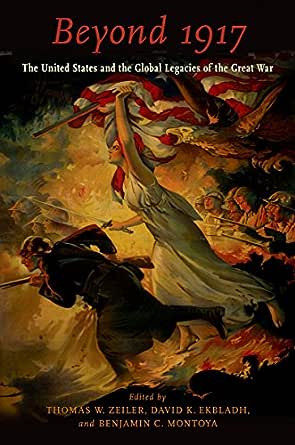 Flip to back Flip to front
Audible Sample Playing... Paused   You are listening to a sample of the Audible narration for this Kindle book.
Learn more
ISBN-13: 978-0190604004
ISBN-10: 019060400X
Why is ISBN important?
ISBN
This bar-code number lets you verify that you're getting exactly the right version or edition of a book. The 13-digit and 10-digit formats both work.

A massively destructive and transformative event, the First World War left in its wake many legacies. Beyond 1917 explores both the consequences of the war for the United States (and the world) and American influence on shaping the legacies of the conflict in the decades after US entry in 1917. From the fields, seas, and airspace of battle, we live today with the consequences of the Great War's poison gas, post-traumatic stress disorder, and technological inventions such as air bombardment of civilians, submarine and tank warfare, and modern surgical techniques. Conscription, pacifism, humanitarian campaigns, and socialist movements emerged from the war to shape politics within countries for decades to come. Governments learned the value of propaganda, both in print and in film. Society changed: women were emancipated in some countries and citizenship was altered in many places, while aristocracy and monarchies went into decline. European empires were transformed and in some cases destroyed; in the Middle East, the change was enormous, beginning with the final collapse of Ottoman hegemony in the region. Fascism and communism, mass migration, independence, militarism, an influenza epidemic, the rise of Wall Street and American economic power, a slowdown in the process of globalization, and the pursuit of world peace by an organization based on collective security numbered among the most significant and lasting legacies of this conflict.

Beyond 1917 explores how and why the war has become an integral milepost for human history, reflects the importance of the conflict, the forces that led to it, and the forces it unleashed. On the occasion of the centennial commemorations, an international group of scholars considers the long-term policy, political, social, economic, and cultural consequences of the war for the United States itself and for the world. In addition to interpretive essays, the volume provides a comprehensive bibliography and timeline of events.
Read more


Thomas W. Zeiler is Professor of History and Director of the Program in International Affairs at the University of Colorado Boulder. He is the author of Annihilation: A Global Military History of World War II, among other titles. He is the former Editor of Diplomatic History and President of the
Society for Historians of American Foreign Relations (SHAFR).

David K. Ekbladh is Associate Professor of History and Core Faculty in International Relations at Tufts University. He is the author of The Great American Mission: Modernization and the Construction of an American World Order.

Benjamin C. Montoya is a Lecturer in History and International Affairs at the University of Colorado, Boulder.
--This text refers to the hardcover edition.