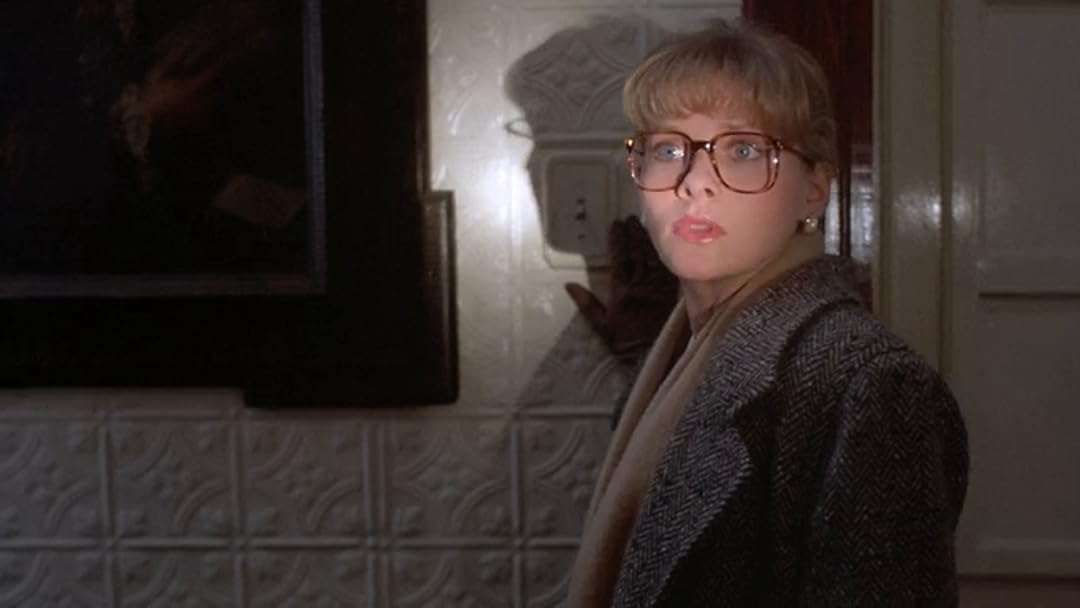 (1,898)
6.71 h 25 min1986R
Scientists create a resonator to stimulate the pineal gland which results in the sixth sense but instead open up a door to a parallel and hostile universe.

bugmanReviewed in the United States on September 19, 2019
5.0 out of 5 stars
Improving on Lovecraft
Verified purchase
from beyond (1986). god, this movie is smart and wonderful. jeffrey combs, barbara crampton, and ken foree just own this it, and the final frame is a manic delight. beautiful and creative prosthetics, as well as an awesome central premise, make from beyond really special. the movie is also very intentional in the way it uses colors. stuart gordon is an underrated master, and he continually XXXX's with my head with his collision of sex and horror, done so smartly, so disturbingly. i've been watching from beyond since i was in tenth grade (33 years), and it just gets better and better. The shout factory blu is absolutely gorgeous; the picture is extremely crisp, and the colors leap off the screen. you'll literally feel the tentacles.
10 people found this helpful

a waltherReviewed in the United States on December 3, 2016
4.0 out of 5 stars
More Shocking Fun From Director Gordon! Just Don't Ask His Mother.
Verified purchase
Ah, the beauty of it all seeing Barbara Crampton manhandled (er, creepy creature handled...), again, reminiscent of Stuart Gordon's Re-Animator (and the infamous "head" scene).
FROM BEYOND was released in 1986 soon after Re-Animator; and just like Gordon's first foray into H.P Lovecraft territory I'm glad to announce I found my FROM BEYOND (Unrated Director's Cut) complete with Special features including humorous and informative commentary from Director Gordon alongside cast members Crampton, Jeffery Combs (not the 'mad' scientist in this one but a possible mental patient...), and Producer Brian Yuzna. Director Gordon tells us (in commentary with cast) after his mother saw a particular scene with Miss Crampton that she bluntly told her son "...you know you made porn...?" to which the Director concludes: "Hey, if you can't offend your mother...".
I gave FROM BEYOND (Unrated Director's cut) an easy 4 star review even though the conclusion offers some "realism" criticism: And the cast ask their cohort Director just why did he make a certain choice? Stuart Gordon explains that he had wanted to simply use "gasoline" for a "fire" but the Italian studio (Not one actual 'outdoor' shot...!) being used did not want the set damaged, so, the 'prop' that was chosen arrives in the hands of a psychologist!? (really...?). "We were going to explain how (psychologist did this) but it felt like a waste of time...." Gordon concludes, defending the choice.
The 'prop' does stick out like a sore thumb but after 80 minutes of a movie that is really outrageous (did i mention damn entertaining in all its black-comedy gore/slime) "realism" can be put on the back burner. Besides, psychologist takes time to change clothes too. It's all soooo obvious and ridiculous it can be viewed as a visual joke.
And, again, like Re-Animator, the final scene in FROM BEYOND is a perfect way to end what, in essence, is a horror movie.
FROM BEYOND is a fun, wild and 'Crazy' ride for sure.

EinsatzReviewed in the United States on January 17, 2017
5.0 out of 5 stars
“With five feeble senses we pretend to comprehend.”
Verified purchase
Grotesque, gory, gruesome, grisly, funky, and fun! This is Stuart Gordon’s adaptation of H.P. Lovecraft’s short story From Beyond. The bare bones of the story have been expanded upon and subverted for Gordon’s use. More people have been added to a simple two character story; the action is forced beyond the attic. The original story was about revenge, the movie is about a power that topples lesser minds and corrupts their judgment. The movie gets a little messy. Other themes are explored: jealousy, desire, and megalomania. Jeffrey Combs is excellent as the pawn in Dr. Pretorius’ schemes. Barbara Crampton plays a dubious psychiatrist who is easily seduced by the power of the Resonator. Things do not end well for everyone.
Things drip, ooze, and congeal into dreadful misshapen monstrosities. What a challenge, to produce something scary and not unintentionally funny. This could have gone either way. Fortunately, it went the right way and it is a minor masterpiece of sorts.
15 people found this helpful

Tim F. MartinReviewed in the United States on July 20, 2021
3.0 out of 5 stars
Kind of fun practical effects laden body horror 80s homage to Lovecraft
Verified purchase
From Beyond (1986), an American science fiction/horror film based on a short story written by H.P. Lovecraft (written in 1920 and published in 1934). The basic premise is that two scientists, Dr. Edward Pretorius (played by Ted Sorel) and his assistant, fellow scientist Dr. Crawford Tillinghast (played by Jeffrey Combs) have developed a device called the Resonator, that when activated can stimulate the pineal gland in humans. Unfortunately, the Resonator lets people see creatures from another dimension (and the creatures now have the ability to see and attack people) and the Resonator, in stimulating the pineal gland, also turns people in grotesque, megalomaniacal monsters.

After the device is turned on and it appears that Dr. Pretorius was killed and Crawford (how he was referred to in the film) was the murderer, well, the police don’t really buy his story about other dimensional monsters having been responsible. Understandable. Committed to a psychiatric ward, the doctor treating him, Dr. Katherine McMichaels (played by Barbara Crampton) is for some reason convinced of Crawford’s innocence and somehow convinces the police to let her go back to the Resonator and prove Crawford’s innocence (which seems dubious, as if he is wrong, he is an insane murderer, if right, he created monsters, but nevertheless it is what happened). Accompanying Crawford and Katherine is Detective Bubba Brownlee (played by Ken Foree), with the three of them staying in the creepy mansion used for the experiments. Bad things happen.

Well, the movie gives you your money’s worth as far as practical effects go, as well as grotesque, misshapen, formerly human monsters and lots and lots of body horror. At times it was the like the second version of The Thing (creature-wise, at least when it wasn’t looking like someone else) if one added a lot of villain monologuing. Definitely an 80s film with some gratuitous female nudity a few times. The practical effects were mostly pretty good, sometimes excellent, though a few times not so much. I really liked Bubba’s character, as he gave a lot of everyman “are you kidding me?” grounded vibes the film needed, which is good because absolutely no one else in the movie kept it real (well there is another detective we see in a few scenes towards the beginning and at the end who kept it real, but he was hardly a major character, plus one of the doctors at the psychiatric ward pointed out that Dr. McMichaels had questionable methodology and ethics and this is a completely and totally accurate thing to say based on what happened in the movie, but again, not a major character). The movie is pretty gory and people definitely suffer in the film. Though kind of science fiction, sort of, it is firmly for me in the horror category. That and some things happen towards the climax that I wouldn’t have any other way to describe other than “magic.”
One person found this helpful

HagenReviewed in the United States on January 9, 2020
5.0 out of 5 stars
Another dimensions of cosmic terror
Verified purchase
I love movies with Jeffrey Combs and directed by Stuart Gordon and produced by Brian Yuzna, this trio are a rock. Something on Lovecraft's fiction that is difficult is to describe cosmic terror and atmosphere, and graphically the most and I think here it is achieved in the way describing how would it be to have different dimensions or world coexisting in the same place all the time and how could we reach those realities. Even to have other senses than the 5 we have.
4 people found this helpful

joel wingReviewed in the United States on November 28, 2020
3.0 out of 5 stars
Story about science gone wrong based upon HP Lovecraft but does have its issues
Verified purchase
From Beyond was based upon an H.P. Lovecraft story where a scientist Dr. Crawford Tillinghast (Jeffrey Combs) events a gateway to another dimension that’s full of monsters. Dr. Katherine McMichaels (Barbara Crampton) wants him to re-create the experiment which of course leads to nothing but trouble.

The story focuses upon science gone wrong with scientists losing sight of what they were doing and ignoring the consequences. Besides the monsters people also get transformed. The effects although dated today were pretty crazy and groundbreaking for their time.

The movie does take the suspension of belief however such as when a doctor finds a protruding third eye in Tillinghast’s head and just leaves it alone. There are other moments like that that mar the story.

This was also director Stuart Gordon’s second film and had some similarities with his first release The Re-Animator in terms of look and style. That’s kind of hard to ignore since they both featured Jeffrey Combs as the lead.
C
2 people found this helpful

Tyler JobsonReviewed in the United States on October 14, 2019
4.0 out of 5 stars
I'm such easy prey for Stuart Gordon's movies
Verified purchase
Like Stuart Gordon's preceding movie, Re-Animator, From Beyond is about scientists playing with the laws of nature who don't realize the consequences of their actions until it's too late. This time, it's an experiment to enhance the pineal gland so that it becomes a (literal, worm-like) third eye, allowing the subject to interact with other dimensions. In true Stuart Gordon fashion, the experiment also turns its subjects' sexual appetites, as well as their taste for human brains, up to 11. Re-Animator vets Jeffrey Combs as the more skeptical scientist and Barbara Crampton as his psychiatrist are in their prime. You could say the same about the creature effects of Nightmare on Elm Street vet Mark Shostrom, which are easily on par with Rick Baker and Rob Bottin's work. It's not a classic like Re-Animator and the ending is a little too pat, not to mention employs an oft-parodied cliché than dilutes its tension. Even so, it deserves credit for being full-fledged and filler-free in spite of being borne from a short story that is only 7 pages long.
One person found this helpful

DafReviewed in the United States on August 23, 2021
2.0 out of 5 stars
Leaves you wanting more (in a bad way)
Verified purchase
So you sit down to watch a movie called 'FROM BEYOND' about a machine that lets people see creatures from another dimension and you get excited at all the possibilities. Like maybe these creatures are going to cross into our own dimension and start wreaking havoc, or maybe our heroes will be trapped in that other dimension and will need to find a way to escape, or maybe everyone's going to randomly undergo hideous mutations or something!

There's a tiny bit of each of these scenarios in 'From Beyond' but for the most part it's all so disappointingly small and limited in ambition. It mostly boils down to a mad scientist who continually looks more and more like a giant intestine with a face each time we see him, with a detour in the second half in which Jeffrey Combs becomes some sort of hairless albino zombie needing to eat people's brains in a hospital. 'From Beyond' has a premise that promises so much more than the movie actually delivers.
See all reviews
Back to top
Get to Know Us
Make Money with Us
Amazon Payment Products
Let Us Help You
EnglishChoose a language for shopping. United StatesChoose a country/region for shopping.
© 1996-2021, Amazon.com, Inc. or its affiliates