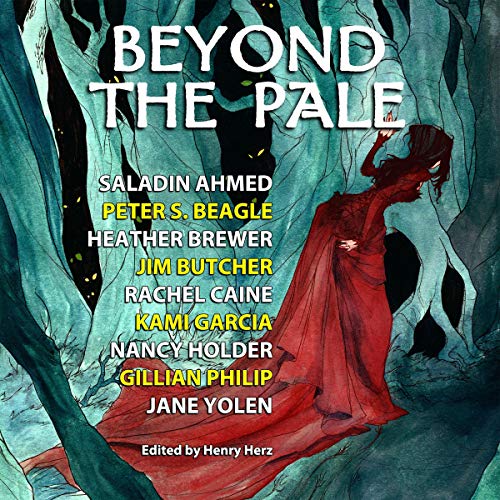 Beyond the Pale: A Fantasy Anthology

Beyond the Pale is an anthology of 12 dark fantasy and paranormal stories that skirt the border between our world and others. Was that my imagination, or did I hear something under my bed? What was that blurred movement in my darkened closet? There is but a thin veil separating the real and the fantastic and therein dwell the inhabitants of these stories.

Beyond the Pale's award-winning and The New York Times best-selling authors present:

The noun “pale” refers to a stake (as in, one used for impaling vampires) or pointed piece of wood (as in, a paling fence). “Pale” came to refer to an area enclosed by a paling fence. Later, it acquired the figurative meaning of an enclosed, and therefore, safe domain. Conversely, "beyond the pale" means foreign, strange, or threatening. You are about to go beyond the pale.

Kindle Customer
4.0 out of 5 stars I liked it, will definitely check out more
Reviewed in the United States 🇺🇸 on November 29, 2014
Verified Purchase
This was a very enjoyable collection of stories set in the fantasy realm. One of the things I really appreciate about short story compilations is that they introduce me to a lot of authors. I'd been wanting to check out Saladin Ahmed for some time; I now have been introduced to at least a glimpse of his style. I liked it, will definitely check out more. I also thoroughly enjoyed discovering Heather Brewer and Rachel Caine. And, of course, the main reason I purchased this book was that it featured a Jim Butcher story- this was an excellent brief visit to the world where Dresden lives- but it didn't involve Harry Dresden at ALL, which was actually pretty awesome. Several other long-enjoyed characters from the Dresdenverse were present, however. Including one that I believe doesn't get nearly enough "screen time" as it were.

Definitely would recommend this to fans of fantasy.

Also: If you read this, and like it, I'd highly recommend checking out the works of KW Taylor (she is on Goodreads & Amazon- find her!). As I was reading this, I noted that several of her own short stories would easily slide into this collection.
Read more
4 people found this helpful
Helpful
Report abuse

Scout
4.0 out of 5 stars Worth the read.
Reviewed in the United States 🇺🇸 on September 7, 2014
Verified Purchase
I have to admit up front that I am a big Jim Butcher fan, and that is the reason I downloaded this book. His story, told from the perspective of perennial bad guy John Marcone, did not disappoint in the least. In it, we see a little bit of what drives Chicago's premier crime boss to do what he does and we also get a glimpse that maybe, just maybe, he isn't quite as bad as he seems to be.

The four stars come from the compilation of other tales. All are good, but some are better than others, at least to my taste. I won't go into detail here other than to say that the overall book is worth the read, and you might even find a gem that you will truly enjoy.
Read more
7 people found this helpful
Helpful
Report abuse

Greenman
4.0 out of 5 stars Review of Beyond the Pale
Reviewed in the United States 🇺🇸 on August 30, 2014
Verified Purchase
I am usually not a big fan of anthologies although it was an anthology that introduced me to Jim Butcher and Simon Green. However, the other stories in this book aside from the Jim Butcher story did not peak my interest, They were good and decent stories but they did not excite me like the "Mean Streets" anthology that introduced me to Simon Green, Jim Butcher and Tom Sniegnoski and others. A good read but not that exciting except for the Jim Butcher story.
Read more
4 people found this helpful
Helpful
Report abuse

James H. Sheppard
3.0 out of 5 stars Typical for an Anthology
Reviewed in the United States 🇺🇸 on November 1, 2015
Verified Purchase
I am not a fan of anthologies! That said this was,overall, quite mediocre. Typical for an anthology, there were a few decent stories, and quite a few below par stories.
Read more
3 people found this helpful
Helpful
Report abuse

Linda Duncan
3.0 out of 5 stars ok but not a favorite
Reviewed in the United States 🇺🇸 on April 4, 2017
Verified Purchase
it's ok
Read more
Helpful
Report abuse

BC1130
4.0 out of 5 stars I liked most of the stories.
Reviewed in the United States 🇺🇸 on December 12, 2014
Verified Purchase
There are some good stories in here.
Read more
One person found this helpful
Helpful
Report abuse

Paulina Piazza
5.0 out of 5 stars Definitely a buy!
Reviewed in the United States 🇺🇸 on October 6, 2015
Verified Purchase
This book was fantastic. There were great stories from authors I knew and great stories from authors I hadn't heard of. A great book to discover great urban fantasy writers!!
Read more
One person found this helpful
Helpful
Report abuse
See all reviews

Stephen Wortley
1.0 out of 5 stars The most uneven collection yet
Reviewed in the United Kingdom 🇬🇧 on December 27, 2018
Verified Purchase
Right, I like Harry Dresden - I like the other characters, I even have a sneaking regard for John Marcone. I have been prepared to buy short story collections to keep up, but while those by Pat Elrod were generally 4 star overall, there are only two worth reading here. Most should not have made it beyond lower-grade fanfic, and frankly I should have waited for JB to pull another collection together.
Read more
Report abuse

Kindle Donna
4.0 out of 5 stars Entertaining quirky and chilling
Reviewed in Canada 🇨🇦 on August 3, 2019
Verified Purchase
Loved the Jim Butcher tale best. I may never go without a night light again after reading about Fax & Jon's adventure. Vampire rats and mice made me chuckle too.
Read more
Report abuse