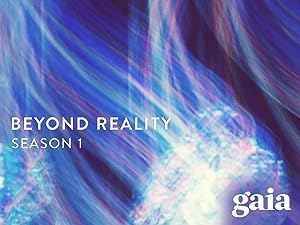 Season 1
(19)
7.51992TV-G
A supernatural drama series follows two para-psychologists who research strange and unusual phenomena that are "Beyond Reality."

MoonbeanReviewed in the United States on October 10, 2020
4.0 out of 5 stars
Great bit of Sci-Fi
Verified purchase
Before Mulder teamed up with Scully, JJ Stillman and Laura Wingate were hitting the streets to investigate paranormal happenings and All Things Weird. Although this show never became nearly as popular as the one it so obviously inspired (and leaned more toward Monster of the Week than Government Conspiracy), it's definitely worth watching! If you like shows like Supernatural and X-Files (and even Are You Afraid of the Dark), you'll enjoy this.

AmazoningReviewed in the United States on May 8, 2008
5.0 out of 5 stars
A Great Series from the Early '90s - Worth Seeing Again
Verified purchase
This is a gem, an early '90s series with episodes based on true events. The "true events" are often questionable urban myths, or off the mark representations of non-mainstream religions, but there is no question that this series is worth watching. The acting stands up to the test of time, with writing that fits a complete storyline into each episode. Season one is 22 episodes, which harkens back to a time when no one would call 12 episodes of a show a "season". Shari Belafonte and Carl Marotte do a great job portraying the main characters: Laura Wingate a parapsychologist; and J. J. Stillman, a clinical psychologist; as a university's Parapsychology department. Their characters mesh well, and balance each other while pursuing the validity and cause of each episode's supernatural focus. Nicole deBoer joins the cast later in the season.

Some of the clothing - and a lot of the technology - screams late 80s to the early '90s. Still, the portrayals of everyday folks seeking help in dealing with unusual events in their lives make for interesting viewing. Rather than using a narrator voicing the story in a somber voice, as is often done with more recent shows depicting the paranormal, Beyond Reality used talented actors to convey the eeriness of having day to day life disrupted by a supernatural event. And did a very good job of it. I'm looking forward to the next season of Beyond Reality being released on DVD.

Kindle CustomerReviewed in the United States on May 21, 2018
5.0 out of 5 stars
Five Stars
Verified purchase
I really wish I could find the rest of this series. Brings back so many memories!
3 people found this helpful

Ronald PoplaskiReviewed in the United States on May 31, 2008
5.0 out of 5 stars
An old favorite of mine, as well as my son's!
Verified purchase
My son and I, have loved this show since it first made it's appearance years ago. we would make a game of it and see who guessed more accurately regarding the collection of short stories, with the true or false question that each presented, which of us guessed more with a right answer, be it true or false.
The stories there selves are all interesting and hold your attention whether finding it was a true or false story. It would always seem that the most unbelieveable clips were the true one's..."go figure"
In any event, you will not regret this purchase, it's entertaining with or without the game and just plain fun to watch!

Harvey87Reviewed in the United States on May 18, 2018
3.0 out of 5 stars
Three Stars
Verified purchase
Cheaply made early 90's sci-fi show.
One person found this helpful

BrianReviewed in the United States on February 13, 2008
3.0 out of 5 stars
Okay, but dated
Verified purchase
I remember this series when it was being aired and at that time, I found it pretty cool, but ..... when you hold this up to other series that are available, it feels awful dated and seems lacking. Sheri Belafonte's hair style - I don't know what you call it except maybe 'buckethead' makes me think she was once one of the birds in the Flock of Seagulls new wave band, and did this series between takes. The acting is mediocre at it's best and the story lines are so - so. If you're into tales of the supernatural and generally like creepy stuff, check out the WB series Supernatural. Much better story lines, with continuity, and top notch special effects - plus no buckethead hairdoos.

The main problem is that this show tries to be two things and fails at both.

First, it's marketed as a Horror show. But the horror is weak. I don't need gore, but these stories aren't even suspenseful, let alone scary.

Second, it's marketed as a True Paranormal show. Something for Jonathan Edwards fans. For people who watch "true ghost-hunting" shows with "dramatized recreations" of supposedly real events.

Each episode begins with the message: "The following story of paranormal activity is based upon reported incidents."

But note the phrasing -- "reported incidents." Plural. In other words, each episode is NOT a recreation of an actual incident, but a "story" BASED UPON a mish-mash of MANY incidents.

I think the producers simply perused many articles about astral projection, reincarnation, hauntings, whatever -- then created an entirely fictitious story "based upon" whatever bits and pieces they liked from all their research.

These stories aren't recreations of actual paranormal events. Which would be okay if the horror weren't so weak. Unfortunately, the "horror" is laden with squishy new age/feel good spirituality.

In "Intimate Shadows," a woman sees her husband's ghost. Not that the ghost is scary -- he's nice to the woman. Then our intrepid paranormal investigators discover that the "ghost" is not a ghost at all. It's an astral projection by the husband, who's still alive and living as a homeless man. In the end, the wife reaches out to her homeless hubby, and it's implied that she'll help him get back on his feet.

In "The Bridge," a boy sees his dad's ghost, and wants to die to join him. But the ghost tells the boy that he needs to go on living, because it's not his time to die, and his mother needs him.

In "The Cold," a woman sees an old lover's ghost in a frozen cave. Research reveals that the lover died recently, and was cryogenically frozen. But he's changed his mind, and wants to fully die. The woman, and our paranormal investigators, convince the wife that this is indeed her frozen husband's true wish. So she "frees his soul" by unfreezing his body.

Many of the episodes are this sort of squishy, spiritual, New Agey, feel good stuff.

Some of the stories are just plain silly. In "Master of Darkness," college students engage in a Dungeons & Dragons type role-playing game. Through hallucinogenic incense, they transport themselves onto an astral plane where the game becomes real. What happens to them on this astral plane happens to their bodies back on Earth. Those who are imprisoned on the astral plane, disappear on Earth.

So the paranormal team enters this astral plane -- one of them, luckily, was a role-playing game fan back in college -- and beat the Dungeon Master at the game. This frees all the trapped students. The Dungeon Master/college student apologizes for getting carried away, and everyone is friends again, having "learned their lesson." (The show's moral: live life and meet people, rather than get lost in fantasy role-playing games.)

Stephen King has said that the typical horror anthology show has about 1/3 great episodes, 1/3 so-so episodes, and 1/3 duds.

I bought this on Amazon for $5.99. For 22 episodes, that's pretty cheap, so I don't mind the duds. I fast-forwarded through a couple of the really bad episodes, and you can do the same.

One bright spot: a half dozen or so of the supporting actors appeared in episodes of Friday the 13th: The Series, another made-in-Toronto TV series shot around the same time. (e.g., Kate Trotter played the wife in "Intimate Shadows.")

Horror fans may want to add this DVD to their collection, provided the price is low.
One person found this helpful

Robin BarnumReviewed in the United States on March 5, 2013
5.0 out of 5 stars
Loved this series
Verified purchase
what else can I say - loved this series. Wished they would have continued it, but like many other shows, it was cancelled.
2 people found this helpful
See all reviews
Back to top
Get to Know Us
Make Money with Us
Amazon Payment Products
Let Us Help You
EnglishChoose a language for shopping. United StatesChoose a country/region for shopping.
© 1996-2022, Amazon.com, Inc. or its affiliates