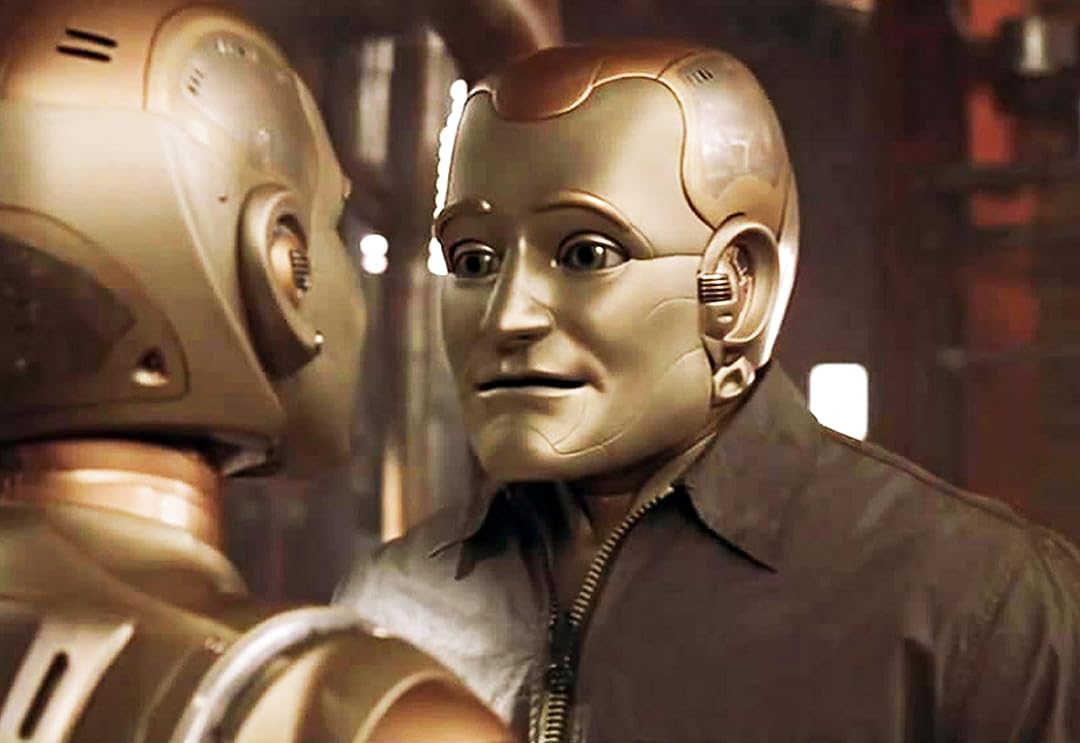 Thomas66Reviewed in the United States on October 26, 2018
2.0 out of 5 stars
Dystopian Nightmare or Creepy Dream World
Verified purchase
There's a good reason this isn't on any top 100 lists, other than maybe Ray Kurzweil's.
It's preachy about android rights and low on humor.
If you know anything about the Singularity and you're all for it, this is an early effort to champion the cause.
If you find the Singularity an obscene, selfish, creepy dystopian vision of the future you'll dislike this movie.
If seeing Washington DC as the global socialist headquarters of the world appeals to you, you'll love this movie,
and if not you'll hate it.
Robin Williams is ok, and certainly not Patch Adams here.
So if you're looking for Mork and Mindy or Mrs' Doubtfire, watch those over again.
If the not so heart warming story of a robot trying to become accepted as a human being appeals to you, enjoy.

J&AReviewed in the United States on July 27, 2016
5.0 out of 5 stars
Humanity at its finest
Verified purchase
Every single time that I watch this, it not only reminds me how very small I am, but how the humanity I feel is a gift. Every broken heart, everyone loved one lost, every struggle; it is all humanity. It is what makes us who we are. This movie is so good that you can totally lose yourself in it. Robbin Williams breaks me heart over and over. It is a brilliant movie that takes humanity and breaks it down.
31 people found this helpful

Alex SteinerReviewed in the United States on April 25, 2017
5.0 out of 5 stars
This was always a movie that I've enjoyed. It is futuristic
Verified purchase
This was always a movie that I've enjoyed. It is futuristic, but also features believable characters and an amazing cast. It is long, but it tells a story from birth (or creation) to death. Robin Williams, Sam Neill and Embeth Davidtz are all great, though I feel Williams was restrained by his character. Oliver Platt comes in later, and (quite literally) gives more life to the story. The ending introduces the question of humanity and how we will possibly live with conscious beings who are not necessarily human. Because deep learning, neural networks and the internet of things are now becoming part of our everyday life, I believe this movie would have been better received if it were released a decade or so later. No, it's not a perfect movie, there are slow moments and some connections need to be made by the viewer, but it still has beautiful production value. The music score is fantastic and also well-timed--brings out emotion in the film. Worth a watch, and for some, it is worth having to keep.
15 people found this helpful

Mr. ZHIReviewed in the United States on August 22, 2019
5.0 out of 5 stars
Robin Williams makes anything awesome
Verified purchase
I love pretty much everything with Robin Williams in it. I had been planning on seeing this for YEARS... but could never get myself to do it, because I thought it would be heartbreaking. It is, and isn't. It is heart breaking and heart warming... only Robin Williams could star in a movie that does these two things together. I am not going to spoil anything... but if you watch this and don't experience a whole roller coaster of emotions... you are probably not human. If you watch this movie, you will probably laugh and cry and do both of them at the same time.
5 people found this helpful

Christina ReynoldsReviewed in the United States on March 23, 2021
2.0 out of 5 stars
Conceptually? Great. Execution? Not so much
Verified purchase
My rating is more of a 2.5.
Thanks for reading!

Bicentennial Man is a 1999 American science fiction comedy-drama film starring Robin Williams, Sam Neill, Embeth Davidtz (in a dual role), Wendy Crewson, and Oliver Platt.
Richard Martin (Neill) buys a gift, a new NDR-114 robot. The product is named Andrew (Williams) by the youngest of the family's children. "Bicentennial Man" follows the life and times of Andrew, a robot purchased as a household appliance programmed to perform menial tasks. As Andrew begins to experience emotions and creative thought, the Martin family soon discovers they don't have an ordinary robot.

If not for the wings provided by its cast, ‘TBM’ would barely levitate above the ground of which it is settled. Don’t get me wrong or anything: I can admit that ‘Andrew’s metallic exterior doesn’t keep him from being personable in the ways that sometimes matter most (His struggle with concepts not meant to be taken literally is 𝒔𝒐𝒐𝒐 me), but the connections remain shallow and relentlessly uninspiring. Equally constrained are the performances of its supporting characters (A real shame, given what Neill and Davidtz are capable of): endlessly struggling to breathe life into a bureaucratic and equally calculated script. Thankfully, some reprieve is found in Williams’ trademarked knack for spontaneity and improvised humor (R.I.P.!) , but the enjoyment that comes from it is woefully temporary.

Alas: Some noteworthy attempts are incorporated to illustrate the development of Andrew as a character, but many of these gestures, interactions, and events are wildly contradictory in practice. The viewer is reminded multiple (well, countless) times that Andrew’s functioning - mechanically and technically speaking - is “conceptually unique”, but little is done to follow through with convincing reinforcement. Why not use other androids as a means of elaborating on the complex relationship between man and machine in this particular universe? Why is Andrew’s struggle with immortality and purpose juxtaposed with Androids that have clearly expired (for a lack of better words)? Why are values with significant real world applications only meaningfully explored in conjunction with the metamorphosis of Andrew’s appearance (to that of one that resembles a human)? The screenplay provided by Nicholas Kazan poses lots of questions worth asking or pondering over, but none of them are answered or accounted for in provocative or otherwise inimitable ways.

If ‘TBM’ is anything, however, it’s appropriately ambitious. Inspired by a novella entitled ‘𝑻𝒉𝒆 𝑷𝒐𝒔𝒊𝒕𝒓𝒐𝒏𝒊𝒄 𝒎𝒂𝒏’ by Isaac Asimov, the premise as it relates to this source material is followed remarkably closely. Following through by virtue and with the simplicity of its script, themes associated and entangled in some way to humanity, prejudice, maturity, conformity, and eternal life are given relatively free range despite being provided in explicitly allotted amounts. Nonetheless: these concepts are awkwardly compartmentalized, and those involving Andrew’s presumably subservient role (and how the perspective of this changes) go largely neglected and undeveloped.

If fumbling maniacally with these themes isn’t bad enough, Andrew isn’t the only thing present here that is artificial; A romantically intimate relationship is used to chug ‘TBM’ along an otherwise unstable and rickety track. I don’t have any issue with films that are indulgent in this respect, but this relationship is non-existent in Asimov’s novel when compared. It’s worth noting that this narrative technique (a vigorous shove through a tunnel of love) might be preferred to that of Asimov’s (It gets extremely legally technical), but it’s forcibly inserted in an unbelievable manner that becomes increasingly more difficult to become and remain emotionally invested in.

‘TBM’ foozles with topics meant to evoke some significantly stimulating discussion or introspection despite being done in an ultimately superficial and juvenile manner;
Refusing to shed its bionic shell: hints of humanity and intellect are reached for with no permeating avail.
One person found this helpful

James N. VuksicReviewed in the United States on October 1, 2017
5.0 out of 5 stars
I would recommend this movie to anyone who wishes to witness a ...
Verified purchase
At various times throughout this movie, the professional, heart-felt performances of the star, Robin Williams, and supporting actors display humor, sadness and frustration experienced by the players that emphasize the kinds of human social pressures, prejudices and ingrained cultural notions that often impact new and unique challenges to the norm.

I would recommend this movie to anyone who wishes to witness a dramatic and often humorous portrayal of human advancement, maturing and growing acceptance of change and types of challenges that we all experience during our lifetimes.
13 people found this helpful

R. A. CardenasReviewed in the United States on February 16, 2021
4.0 out of 5 stars
Fitting Tribute to a Great Actor
Verified purchase
One of my favorite films for many years and a fitting tribute to the great American actor, the late Robin Williams. The film deals with many topics: what it means to be human, what is life, death, various meanings of immortality and whether or not it is gift or curse. A beautiful film with a terrific cast. I would give it a 5 but instead a 4 because the only time God is mentioned, the author of existence, is in curses and damnations. Humanistic yes but a little too secular for my tastes, especially when topics such as these, many of which are religious, are addressed. If this is truely Bicentennial Man, I fear. Otherwise, the script, except for the aformentioned, is magnificent and well done. Very, very thought provoking. Robin Williams both is and was truely a great actor. The world lost a great talent when he passed.
One person found this helpful

Butterflymom54Reviewed in the United States on October 8, 2020
4.0 out of 5 stars
Starts out great then becomes strange.
Verified purchase
This movie starts out great. Funny and heartwarming. The robot becomes more like a human and the humans like that. It seems family friendly until toward the end when the robot "falls in Love". I guess that is the reason or purpose for the movie but it made me uncomfortable in nature and language. I guess I am too "no nonsense" and literal for this premise. Humans are humans and robots are machines and never the two shall converge. Still it is a cute movie. Fun most of the way through. Robin does a great job here. I did finish the movie. I think it would be challenging for a young child to process. It seems the robot developed feelings for the youngest daughter and the writers just made a way for them to be together which was weird. Anyway. There are a great many parts that are fascinating but others that are freaky. I still give it a 4 for all of the parts I liked and removed one star as the premise can be cringe worthy at times. :)
See all reviews
Back to top
Get to Know Us
Make Money with Us
Amazon Payment Products
Let Us Help You
EnglishChoose a language for shopping. United StatesChoose a country/region for shopping.
© 1996-2021, Amazon.com, Inc. or its affiliates