You've subscribed to My Big Fat Zombie Goldfish Series! We will preorder your items within 24 hours of when they become available. When new books are released, we'll charge your default payment method for the lowest price available during the pre-order period.
Update your device or payment method, cancel individual pre-orders or your subscription at
Your Memberships & Subscriptions
There was an error. We were unable to process your subscription due to an error. Please refresh and try again. 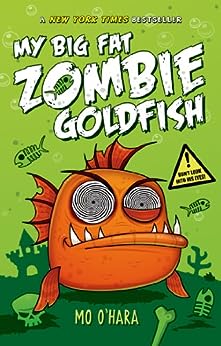 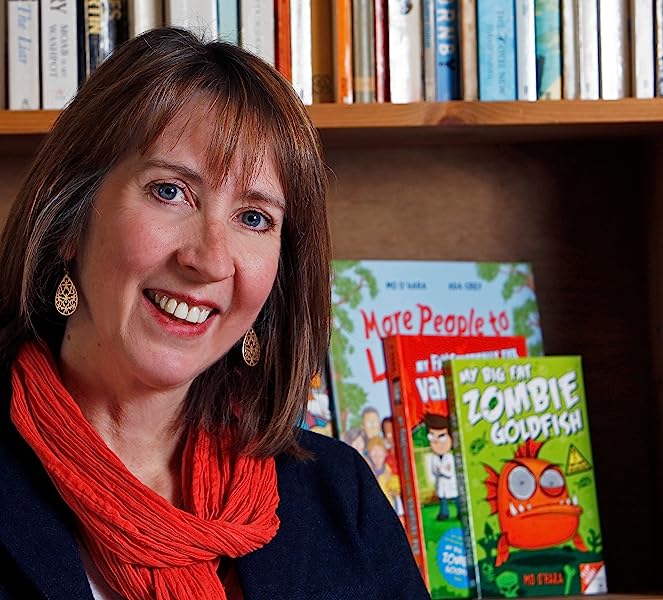 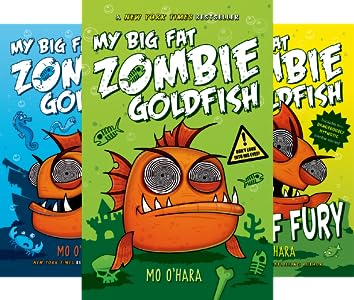 “A kooky, zany little story about a boy and his pet zombie goldfish, Frankie. The kids in my library are already clamoring for this book and I can't get it ready for the shelves soon enough for them. Keep up the good work” ―Wendy A. Emlinger

“I saw this book on sale at Walmart, and I couldn't resist picking it up. The cover just popped out at me. It's a good sized book for young readers. I read it in one sitting, and I loved it!” ―Angela Roquet

“The book is packed with bonkers humour ... Anyone who likes books by Dav Pilkey would seriously love this book.” ―Biteso, for TheGuardian.com

Mo O’Hara is the author of the My Big Fat Zombie Goldfish series. She grew up in Pennsylvania and now lives in London, where she works as a writer, actor, and storyteller, visiting theaters and schools all across the UK and Ireland. Mo and her brother once brought their own pet goldfish back from the brink of death (true fact).

Marek Jagucki, the illustrator of the My Big Fat Zombie Goldfish series, is a graduate of Falmouth School of Art and Design. He is a full-time illustrator and graphic designer based in Yorkshire, UK. --This text refers to an out of print or unavailable edition of this title.


Yesterday my big brother, Mark, turned into a real-life actual EVIL SCIENTIST. I mean, he always was mostly evil anyway—you know, knocking me down things or over things, locking me in things or out of things, squashing me under things or between things, that kind of mostly evil stuff. But lately he’s slid up the evil scale from “mostly evil” to “nearly totally evil.” It started with the way he talked.
“Hey! Tom!” he shouted. “Remote! Now!”
Mark spoke in short words, like his brain had shrunk or something. He grabbed the remote and kicked my foot away. “Moron,” he mumbled.
My best friend, Pradeep, who lives next door, says that “moron” is a big-brother word for little brothers. His brother, Sanj, who’s also mostly evil, calls him that too. Luckily Sanj is away at boarding school though, so he can only be mostly evil to Pradeep during school vacations.
I told my mom about Mark going more evil, but Mom said it’s just that Mark is “home-moanal.” Which I think is why he’s moaning at home a lot. She said he can’t help acting evil (well, she didn’t say evil exactly, but she should have). She said it’s because he has lots of “home-moans” racing around his body.
Just when I thought Mark couldn’t get worse, Granny and Grandad got him a chemistry set for his birthday. It came in a huge box with big official writing on the front that read:
WARNING! Only for use by children over twelve years old. To be used solely under the supervision of adults.
While I was reading the box, Mark thwacked my head from behind.
“Don’t touch this—got it?” he said.
I walked away rubbing my head. Mostly because it hurt, but also to get my head out of the way in case he decided to thwack me again.
He took out a white scientist coat and looked at all the stuff inside the box. There were bottles and test tubes and cups and little stirring things, all made of glass. Real breakable glass! Mom looked at the chemistry set and leaned over to me.
“Maybe you shouldn’t touch it, dear. It looks like an accident waiting to happen,” she said.
Mark put on the coat and turned around. He folded up the collar, shoved his hands in the pockets and let a creepy smile spread over his face. And you know that squirmy, prickly feeling you get when you let a millipede crawl on your arm? I had that feeling, but in my stomach.
Mark had turned into an EVIL SCIENTIST. But I didn’t know how evil he could be until he came home the next day with the goldfish.

4.6 out of 5 stars
4.6 out of 5
680 global ratings
How are ratings calculated?
To calculate the overall star rating and percentage breakdown by star, we don’t use a simple average. Instead, our system considers things like how recent a review is and if the reviewer bought the item on Amazon. It also analyzes reviews to verify trustworthiness.
Top reviews

Jodie
1.0 out of 5 stars Not for everyone
Reviewed in the United States on July 28, 2020
Verified Purchase
I read all the great reviews and decided to give it a try. My daughter wanted the whole set from Costco but we agreed to begin with one and see how that goes. So I bought the first book from Amazon and I'm glad I did. We will not be purchasing any more. I was not happy with the content for an 8 year old advanced reader. It was too simple of a read with very dark undertones.
Read more
6 people found this helpful
Helpful
Report abuse

bboppblue
5.0 out of 5 stars 7yr old loves them
Reviewed in the United States on November 14, 2016
Verified Purchase
My 2nd grader loves these books. Although we read them out of order they are still really fun think read. They do use words likeep "moron" and "stupid" when the older brother is harassing the younger kids but that doesn't bother me as my daughter knows not that use those words when talking to people.
Read more
12 people found this helpful
Helpful
Report abuse

C. Landers
5.0 out of 5 stars Laughter encourages reading
Reviewed in the United States on November 15, 2017
Verified Purchase
I read this book to my son, who at the time didn't enjoy reading very much. This book is funny and showed him a new way that reading could be enjoyable. We love the characters, and Frankie is the best. The flip art on the corners is an added bonus. We look forward to reading the further adventures of Frankie, the zombie goldfish and his humans.
Read more
6 people found this helpful
Helpful
Report abuse

Nye
5.0 out of 5 stars Great Read! Nice Chapter Sizes
Reviewed in the United States on January 7, 2018
Verified Purchase
My kid loves this book! Absolutely hilarious and heart-warming to hear your kid laughing at this book.

It's a wonderful introduction to chapter reading. Definitely not for new readers, but great for kids who love to read (i'd say ages about 8-12+).

The chapters are short, so having rewards for reading chapters makes getting them to read a little easier.

Myron TTop Contributor: Lego
5.0 out of 5 stars My son loves these books!
Reviewed in the United States on June 23, 2017
Verified Purchase
My son absolutely loves these books. I have bought him the entire set that is out so far and he is anxiously awaiting the next one. I am not sure what the appeal is but I know that they have both stories and other games and things for him to play in each book. They are written at approximately a 3rd grade reading level.
Read more
5 people found this helpful
Helpful
Report abuse

Cobwebs and Candlesticks on YouTube
5.0 out of 5 stars Zombie Fish- what more needs to be said...awesome!!!
Reviewed in the United States on February 8, 2020
Verified Purchase
Very cool chapter book for my 9 year old daughter. What kid doesn't want to read about zombie fish? But the hardcover cause softcover suck.
Read more
2 people found this helpful
Helpful
Report abuse

Southern Girl
5.0 out of 5 stars Reluctant Reader
Reviewed in the United States on August 31, 2020
Verified Purchase
I purchased this book for my 8-year-old grandson who hated to read and screamed if asked to read. But he like the zombie goldfish and how the mean mad-scientist brother did not ever win. We bought the second book in the series next.
Read more
One person found this helpful
Helpful
Report abuse

nekozukiChris
5.0 out of 5 stars Gun book for kids and adults to share
Reviewed in the United States on May 12, 2017
Verified Purchase
I bought this to read with my niece. The title sounded funny and made me think she would enjoy it. So far we both really like it and plan to read more books in the series.
Read more
4 people found this helpful
Helpful
Report abuse
See all reviews

Candy Gourlay
5.0 out of 5 stars Every child should have one!
Reviewed in the United Kingdom on June 25, 2013
Verified Purchase
Well ... any child who reads this book will certainly WANT their own zombie goldfish. The madcap adventures of a boy and his revenge-mad zombie goldfish make for an unputdownable, guffaw-out-loud, snort-up-your-milk, flashlight-under-the-covers adventure. Parents, be warned. This book will make readers out of your young children. Highly recommended!
Read more
One person found this helpful
Report abuse

Amazon Customer
5.0 out of 5 stars Easy to read and hilarious too!
Reviewed in the United Kingdom on February 7, 2014
Verified Purchase
The idea behind this book is brilliant. A boy tries to save a goldfish's life and turns it into a zombie, complete with hypnotising powers. It's so easy to read, with short chapters that will leave you NEEDING to turn the page, and a beautiful voice that will make you laugh out loud.

"Finding Nemo meets Shaun of the Dead" is such a good hook, and it's so true.

My Big Fat Zombie Goldfish is like a Pixar movie made into a book, and it will be loved by kids and their parents alike.

Amazon Customer
5.0 out of 5 stars fantastic book/story
Reviewed in the United Kingdom on November 20, 2016
Verified Purchase
My 7 year old Grandson loves this book, its really go him into reading for enjoyment :)
Read more
Report abuse

annie
5.0 out of 5 stars Five Stars
Reviewed in the United Kingdom on August 13, 2016
Verified Purchase
Great book for children with lots of humour.
Read more
Report abuse
See all reviews