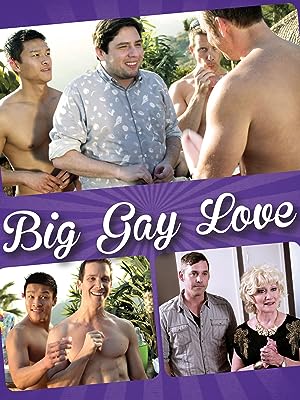 (74)
5.01 h 25 min2013NR
Successful party planner Bob is searching for love on his own terms in body-conscious Los Angeles. When he meets hunky chef Andy, romance blossoms - but Bob’s insecurities run amok when the relationship gets physical. Will Bob win Andy back, and finally have his “big gay love” - or will he take drastic measures to become “perfect,” like his vapid, gym-rat friends?

Drew OdomReviewed in the United States on August 1, 2016
1.0 out of 5 stars
One of the worst in an often dismal territory of gay comedies.
Verified purchase
One of the worst gay-related comedies I have ever seen. Unhappily, there are many of them released on DVD or available to be downloaded these days. It surprised me, since Gayby was often witty and delightful. But Big Gay Love is witless, artless, full of self-denigrating stereotypes (even though the movie wishes to be a plea for "tolerance" and diversity of all types), improbabilities in the plot to the point of nonsense, and a script so unfocused and random that it seems to have been written by a bored committee without any sense of structure or plausible direction. It is a bad movie in every conceivable way, badly acted as well as poorly directed and conceived. I don't get it. Why are so many American comedies that are primarily for a gay audience so lacking in real humor and wit and so dependent on the hoariest old stereotypes in the business, boring (and dated) as a worn out drag show?
4 people found this helpful

Rob C. in MaineReviewed in the United States on February 10, 2015
4.0 out of 5 stars
A good movie, but not a great one
Verified purchase
I enjoyed this film, but I do feel that there were too many gay stereotypes perpetuated. I also feel that the overall message of the film kinda' got lost in the execution. The message seems to be that an intelligent, grounded hunk like Andy really could fall for someone like Bob who is overweight and average-looking because beauty lies within, right? Okay, that works, but what makes the pairing of Andy and Bob so far-fetched is that a self-confident guy like Andy could fall for someone as whiny, self-loathing, and just plain annoying as Bob...regardless of Bob's physical appearance. I totally buy into the idea that one's real beauty is inside, but from my point of view, the character of Bob was lacking both inside and out.
6 people found this helpful

Don ShawReviewed in the United States on August 20, 2021
1.0 out of 5 stars
One of the Worst Ever
Verified purchase
Forget the weight issue. The main character was so neurotic and unlikable that it was impossible to believe a guy like Andy would have been attracted to him, much less pursued him for months. And everyone had such a different acting style, no one seemed to be in the same movie. Stereotypes galore. And capping it off was a cringeworthy last scene at the book signing. Terrible!

Nomi MaloneReviewed in the United States on November 21, 2016
4.0 out of 5 stars
Puts Self and Body Image Issues Front and Center Without Being a ¨Message¨ Movie
Verified purchase
¨Big Gay Love¨ is both unique and not unique in the oeuvre of gay male cinema in that it uses Bob, neurotic Everyman lead who falls for Andy, the ¨Prom King¨ archetype, and Bob's insecurity threatens to unravel the genuine love that Andy has for him. Before he meets Andy, using Bob as an Everyman with whom the seemingly audience can project its own ambivalence about finding love in an often hostile, looks-obsessed microcosm of Los Angeles functions well. Bob is successful, witty, a mix of self-effacing and self-sabotaging, accessible and an ideal combination of the man you want to root for and the man you want to shake and say, ¨Snap out of it!¨

The rest of the story doesn't break new ground although the writer-director gives the Bob character more depth than these films usually allow for, particularly the gay rom-coms with the ¨hot boyfriend¨ role played by a gay-friendly straight actor played Nicholas Brendon or John Stamos, etc. There are several times where Bob'ś behavior tests the audience's sympathy, given that the Bob character often exists as a surrogate for our own experiences. Ultimately, the writer-director depends upon the audience to acknowledge the human capacity for both darkness and light in order to appreciate where his characters ultimately end up.

What I think ultimately sets the film apart most is that ¨Big Gay Love¨ has broken with the caricature of gay men that wider American audiences have seen for decades. We've either seen the slender, barely post-pubescent youth in ¨coming out¨ stories or the incredibly disciplined, muscular and fit men who inhabit a world of perfect skin, protein shakes, and Streisandś lighting director. I have no problem with the fact that gay cinema has cast actors with these bodies because it is reality that these body types are more common and more prized in our microcosm. But how about mixing it up a little? Gay men with different bodies have stories to tell, too.

What really sets ¨Big Gay Love¨ apart is that Bob directly addresses his body and his relationship with it. In fact, it's his relationship with his body that threatens the very stability of his love with Andy. Bobś lack of self-compassion and how he displaces it onto his body becomes a major barrier to intimacy between him and Andy, keeping the two from getting closer when they're dating. This is a topic that doesn't get enough serious traction within the gay community. I'm not talking Ru Paul-style self-help affirmation. I'm talking serious, empathetic acknowledgement that people's displacement of their self-image issues onto their bodies can prevent them from getting what they want out of life. And that holds as true for husky guys like Bob as it does for gay men with any body type or, like any good movie, it can resonate as a universal message for anyone in our society who's told everyday by advertisers and the corporate media you're ¨supposed¨ to look a certain way.

¨Big Gay Love¨ can certainly be appreciated as a piece of fluff for someone who wants to watch a ¨Sixteen Candles¨ style gay romance between an Everyman and a dreamboat. And itś far from a flawless piece of filmmaking. But it does aim higher than a lot of these films often do and it provoked me accordingly.

BReviewed in the United States on May 16, 2021
1.0 out of 5 stars
So disappointing
Verified purchase
The few minutes at the end with Harvey Guillén were the only part of this movie I found slightly watchable. It's really disappointing, because there's a need for queer romances in general, and ones with fat protagonists who are loved for their awesome selves in particular. But none of the characters in this are likeable and it's just a bad movie. As a queer kid growing up in the 90s I've watched a lot of low-budget, probably-trying-their-best films, just for a glimpse of same-gender couples. Even grading on that scale, this is a dismal failure. Save your money and support something better.

Big Band LeaderReviewed in the United States on January 15, 2015
4.0 out of 5 stars
Big guy seeks Mr. Right
Verified purchase
Rather unique among gay films, this presents the dilemma of an overweight
guy hoping to find Mr. Right. No spoilers here, and the characters are well
portrayed. What probably kept me from giving it another star was the role
of the very overweight young guy at the book signing near the end. This
character is on screen far too long, and the dialog between him and the
book author could have been sharply cut without loss of values. That
said, the music score is a refreshing change from the constant use of
mediocre rock, and computer generated sounds
2 people found this helpful

AdrianReviewed in the United States on July 6, 2016
3.0 out of 5 stars
but the main character is more annoying than seems necessary
Verified purchase
Since I'm a huge fan of Buffy there is no way I wasn't going to watch a gay movie with Nicholas Brendon in it, but I wasn't buying him as a gay man for even one second. There is no chemistry between the male leads. I appreciate a movie about a bigger, more effeminate guy, but the main character is more annoying than seems necessary. I don't know why these two like each other at all. ALSO, he isn't that overweight so it seems like a bit of a non-issue. I'm still trying to figure out what the movie was trying to accomplish with the absurdity of the mother character, but I suppose I appreciate them for really swinging for the fences (the actress doesn't pull it of though, so... sad). I didn't hate it, but a lot of it felt lazy and forced.

ACE79Reviewed in the United States on June 21, 2016
1.0 out of 5 stars
Big waste of time.
Verified purchase
Poorly acted, unrealistic, and down-right annoying. Indie gay movies can be excellent (4th Man Out), or at the opposite end of the spectrum, like this one. The main character is shallow, self absorbed and annoying. Why the "Andy" character was attracted to him in the first place is a real stretch. Don't even bother if it's free - I think I wasted a couple of bucks.
One person found this helpful
See all reviews
Back to top
Get to Know Us
Make Money with Us
Amazon Payment Products
Let Us Help You
EnglishChoose a language for shopping. United StatesChoose a country/region for shopping.
© 1996-2022, Amazon.com, Inc. or its affiliates