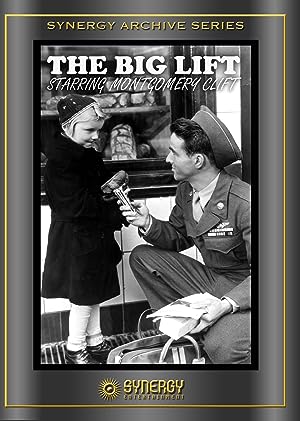 (156)
6.51 h 42 min1950ALL
It is 1948 and the Berlin Airlift is underway to overcome the Russian Blockade of the city. It arouse conflicting emotion; so soon after the war to be coming to the aid of Germans.

Jackbooted thugReviewed in the United States on April 6, 2018
4.0 out of 5 stars
Excellent Sunday Night Family Movie
Verified purchase
The Big Lift is a bit cheesy due to the era that it was filmed but this movie has some awesome history buried within the screenplay.

The parallels to current times, including "Fake News" and the dangerous lure of Communism run throughout this film. There are actually some very good lines in this movie that are relevant today.

The storyline take a few detours here and there but it's still quick movie with a decent plot. Lots of good Berlin Airlift history coupled with early Cold War history. The scenes involving the C-54's (AKA DC-4) are excellent !

The acting is pretty shallow and the plot is just what you would expect from early 1950's America but the writing has just enough edge to it to avoid being campy.

Most of the film was shot in post war Berlin. This is a feel good movie about America's greatness AND it uses the Berlin Airlift as a basis and backdrop.

GiorgioReviewed in the United States on December 3, 2019
2.0 out of 5 stars
Poor Video Quality - Not Digitally Restored
Verified purchase
Any film with the short-lived Montgomery Clift is well worth seeing, but the video quality of this Alpha edition is very disappointing with smudgy images and a lack of sharpness. For anyone who has seen digitally restored 1940's and1950's films, it is clear that this one has never been restored. It is worth noting that In my experience, Alpha DVD's are often of poor quality so buyer beware! Unfortunately, this appears to be the only DVD version available of this film except for Amazon's, which, as another reviewer points out, unconscionably cut out 11 minutes of the film. So it is worth buying but don't expect high quality images.
2 people found this helpful

Tom BrodyReviewed in the United States on July 30, 2012
5.0 out of 5 stars
A history-based comedy/romance/morality tale that is suitable for the entire family
Verified purchase
THE BIG LIFT is a black and white film, using the Berlin airlift as a historical backdrop. The Berlin airlift, which lasted from June 1948 to May 1949, is not just an excuse for making the film. It is a major source of tension, drama, and mild excitement. Much of the film is shot inside C-47 Skytrain airplanes (the military version of the Douglas DC-3). Much of the film takes place in airports. Tension and drama are added to the film, because of the desire of one character, the love interest, Cornell Borcher, to escape from Berlin to America. Tension and drama are also added to the film, because of the strict time-frames and strict regulations, that applied to the plans of the two main characters to get married to each other. Also, even more (mild) tension and drama are provided by the extensive scenery of bombed out neighborhoods, and extreme poverty, in post-war Berlin.

THE PLOT. That said, the following is the plot line, or anyway, some of the plot line. Don't worry, I will not give away the surprise ending. The surprise ending is a great one, and worthy of the best of the TWILIGHT ZONE episodes from the late 50s or early 60s. In short, Montgomery Clift is a U.S. air force soldier with the job of helping to airlift supplies to Berlin. As part of his job, he happens to meet a foxy young German woman (Cornell Borchers). The woman's daytime "job" is to pick up stones and bricks from bombed-out buildings, and to put them in carts for toting away. She claims that she was married to a German soldier, now dead, and that her father was a university professor. To make the storyline more interesting, Montgomery Clift's air force buddy is Paul Douglas, who also has a German girlfriend. As the story continues, we watch the maturing relationship of Mr.Clift and Ms.Borchers, and we also watch the deteriorating relationship of Mr.Douglas and his German girlfriend. A strong part of this storyline is Mr.Douglas' strident anti-German streak, and the fact that the nature of this strident anti-German streak takes a gradual but dramatic shift or turn.

COMEDY. The story includes a few episodes of comedy -- very clever comedy. For example, there is one episode in a train when Russian soldiers are interrogating various passengers for smuggled coffee. The Russian soldiers can smell the coffee, but they don't know who has it. During this episode, a shriveled old lady displays her bag of coffee to another passenger, and then quickly hides the bag under her hat. Then, the Russian soldiers come down the aisle, closer and closer. Suddenly, one of the passengers, a man, rats on the old lady. "She is the one with the coffee," exclaims the man. The Russian soldiers snatch the coffee away from the shrivelled old lady, and then disappear into the next train car. Then, the man opens up his trenchcoat to reveal about 20 bags of coffee (he is a smuggler too!), and with a broad smile, he donates a couple of his bags to the shrivelled old lady and to one of the other passengers. Another excellent bit of comedy, is the episode with the German who spies for the Russians. This episode is at least as good as any of the classic Marx Brothers episodes. We also find comedy in the opening scene of THE BIG LIFT, where a newsreel of an Atlantic City beauty contest is cut short by an emerging routine military task. Comedy is also provided by the gentle livingroom "fight" between Paul Douglas and his sweetie, when the sweetie tosses a barrage of small household objects at Mr.Douglas, while Mr.Douglas hides behind a door.

BETRAYAL. Although I will not give away the storyline, this film provides a powerful lesson regarding betrayal. Accordingly, this film would be excellent for showing in Sunday schools to pre-teens and to teenagers, where the goal is to stimulate discussions about faithfulness, honesty, moral beliefs, betrayal, and particular situations when the best moral decision is to sever a relationship.

SIMILAR FILMS. The closest film to THE BIG LIFT is the renowned CASABLANCA. In both films, the main plot concerns the need to escape from war-torn areas of the world during, or shortly after, World War II. In both films, the film ends with people escaping, by way of a propellor airplane, in the fog. In both films, we find charasmatic male actors, and a fetching love interest. I am not sure why THE BIG LIFT is less famous than CASABLANCA. Perhaps, it is because the Montgomery Clift character is just a young soldier, whereas in CASABLANCA, Humphrey Bogart is the owner of a glitzy casino.

CRITIQUE. The sound quality of the DVD is fine. However, the image quality is blurry. Hopefully, this will be fixed some day, and a new DVD issued.
3 people found this helpful

David LuceroReviewed in the United States on March 5, 2012
5.0 out of 5 stars
A historical masterpiece unmatched!
Verified purchase
Sure this movie was made over fifty years ago, but when you get it right there's no comparison. Montgomery Clift was dead a couple of years before I was born and I remember my mother telling me how much she loved watching this guy on the screen. I think my first movie I saw him in was his debut role in Red River with John Wayne.

The Big Lift was filmed on location and could not be made today in any authentic comparison. Clift plays the typical GI who falls in love with a German who leaves him to believe she's the love of his life. Only she has a secret that leaves you squirming in your seat and praying that Monty sees the light.

My favorite scene is with his best friend, a fellow sergeant who hates the Germans right down to his core. If he had his way they'd leave Germany to the Russians to enact revenge. This guy see's the German prison guard who tortured him during the war and follows him to exact his own justice. When he can't quite understand his feelings afterwards, one cannot help feel gratified a soul is saved rather than lost.

You'll be surprised how many real military men played roles in this movie. If you are a fan of classics, watch The Big Lift. It'll not only take you back in time, but leave you feeling good and wishing you were part of something as grandiose in our time.

ChrisReviewed in the United States on October 11, 2012
4.0 out of 5 stars
Entertaining History
Verified purchase
The Big Lift is an important historical document as well as a fascinating look back at a tense moment in modern history. With only two well-known professional actors, Montgomery Clift and Paul Douglas in the cast, the film brings to life an event now known only in history books in a brief paragraph. We catch the atmosphere of the early Cold War period, with the wariness of both the Americans and the Russians in their high stakes game for control of Berlin. The stories of the GIs and their romances with the local women, as well as their encounters with other German citizens makes a fascinating story. The images of Berlin in ruins is a graphic reminder of the destruction of war. It's also well worth watching to see a young Monty in one of his very early roles.
Unfortunately the quality of the film is less than perfect. It really deserves a good restoration befitting its importance. Along with "The Search," it belongs in any history buff's collection.
2 people found this helpful