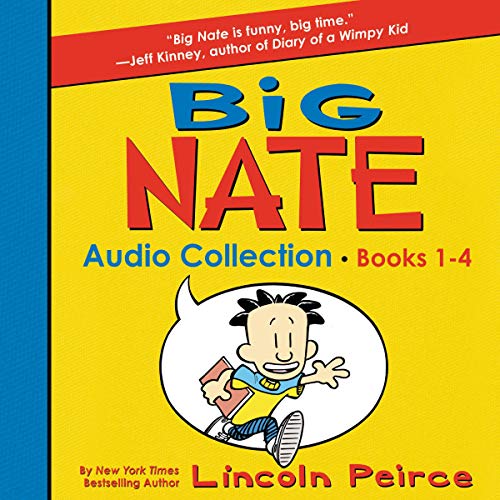 For fans of the hilarious Diary of a Wimpy Kid series: Get ready to meet Big Nate! In this audio collection enjoy the first four adventures of the New York Times best-selling series.

Big Nate: In a Class by Himself: Nate knows he’s meant for big things. REALLY big things. But things don’t always go your way just because you’re awesome. Nate barely survives his dad’s toxic oatmeal before rushing off to school - minus his lunch. He body slams the no-nonsense principal. He accidentally insults his least favorite teacher, the horrifying Mrs. Godfrey (aka Godzilla). And school has barely started!

Trouble always seems to find him, but Nate keeps his cool. He knows he’s destined for greatness. A fortune cookie told him so.

Big Nate Strikes Again: Big Nate will surpass all others!

But it won’t be easy. He’s stuck with Gina, his all-time enemy, in a class project for his least favorite teacher Mrs. Godfrey, aka Godzilla. To make matters worse, Gina ALSO ends up on his fleeceball team, right when Nate is set to win his first fleeceball championship ever. This is his moment for glory, but Gina’s sure to steal his thunder, or ruin everything.

Will Nate win or lose? Pass or fail? Or end up in detention...AGAIN?

Big Nate on a Roll: Nate’s a big deal in his scout troop . . . until Artur - aka Mr. Perfect - joins. Now Nate’s stuck in second place. And Artur means business. Will Nate take the grand prize? Or wipe out, big time?

Big Nate Goes for Broke: Big Nate is going for broke in the fourth novel in the hilarious New York Times best-selling series by Lincoln Peirce!

This time, Nate and his friends are in the Ultimate Snowdown - a wintry snow-sculpture competition against the bullies from Jefferson Middle School, who beat P.S. 38 at EVERYTHING!

Amazon Customer
5.0 out of 5 stars Absolutely fantastic books!
Reviewed in the United States on October 23, 2020
Soft back books in a sturdy case. One of my 9yo’s very favorite book series! I always know when he’s reading this because he’s cracking up. He’s even gotten my 7yo interested in them, and now they both laugh hysterically, while reading them together.
Images in this review

ELAINE T.
5.0 out of 5 stars Grandson's favorite books
Reviewed in the United States 🇺🇸 on August 29, 2022
Verified Purchase
We purchased these books for our grandson for his birthday and he was thrilled. He told me he really liked Big Nate books and would like some for his 10th birthday.
Read more
One person found this helpful
Helpful
Report abuse

Diane
VINE VOICE
3.0 out of 5 stars Wrong size
Reviewed in the United States 🇺🇸 on May 1, 2022
Verified Purchase
These books are about an inch taller than the books in the other big Nate boxed sets, making it look out of place on my shelf. If you're going to print a series, keep the books the same size.

My son likes the stories so I'm keeping them, but it annoys me that they don't match

Amber Soto
5.0 out of 5 stars Absolutely fantastic books!
Reviewed in the United States 🇺🇸 on October 23, 2020
Verified Purchase
Soft back books in a sturdy case. One of my 9yo’s very favorite book series! I always know when he’s reading this because he’s cracking up. He’s even gotten my 7yo interested in them, and now they both laugh hysterically, while reading them together.
Read more

Amber Soto
5.0 out of 5 stars Absolutely fantastic books!
Reviewed in the United States 🇺🇸 on October 23, 2020
Soft back books in a sturdy case. One of my 9yo’s very favorite book series! I always know when he’s reading this because he’s cracking up. He’s even gotten my 7yo interested in them, and now they both laugh hysterically, while reading them together.
Images in this review

Lisa Vannote
5.0 out of 5 stars Great for kids and adults
Reviewed in the United States 🇺🇸 on July 5, 2021
Verified Purchase
I love Big Nate and am very happy with all of the Big Nate books I bought!!
Read more
Helpful
Report abuse

Victorianna M.
5.0 out of 5 stars 10 yr old loves these
Reviewed in the United States 🇺🇸 on January 4, 2021
Verified Purchase
My 10 year old son is a big fan. He’s been blasting thru these box sets, luckily there seems to be dozens of this book series to keep him entertained
Read more
2 people found this helpful
Helpful
Report abuse
See all reviews

Kath Holmes
5.0 out of 5 stars Great books
Reviewed in the United Kingdom 🇬🇧 on November 19, 2018
Verified Purchase
11 Yr old girl loves these books and has already read them all. She said they were great and she recommends them to others
Read more
2 people found this helpful
Report abuse