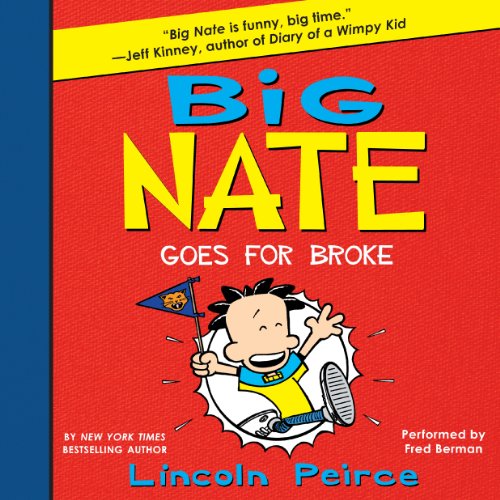 Big Nate is going for broke in the fourth novel in the hilarious New York Times best-selling series by Lincoln Peirce!

This time, Nate and his friends are in the Ultimate Snowdown - a wintry snow-sculpture competition against the bullies from Jefferson Middle School, who beat P.S. 38 at EVERYTHING!

This hilarious, comic-strip adventure is perfect for reluctant readers and fans of Jeff Kinney and Raina Telgemeier.

Includes a sneak peek of Big Nate Flips Out!

Amazon Customer
5.0 out of 5 stars Great book
Reviewed in the United States on July 3, 2016
My 11 year old loves graphic novels and he says this is is favorite in the Big Nate series because it is hilarious.
Images in this review

Alisha
5.0 out of 5 stars book about teamwork
Reviewed in the United States 🇺🇸 on October 16, 2022
Verified Purchase
This book has teamwork to beat their rival school best for kids
8 and up you I recommend this one

Fourtune Teller
5.0 out of 5 stars The Best Book Ever!
Reviewed in the United States 🇺🇸 on July 30, 2015
Verified Purchase
Well, another Big Nate book! They are all very fun, I must say. It's very funny at the best of times. You wish to know what happens? Ok, I'll give you the highlights.... It all starts with Nate and his gang of friends at their normal school, P.S. 38. They are all fine when THIS hapoens- "the school has something weird going on! You will have to go home! We will find you a new school!" (OK, it's not exactly what Principal Nicholes said. But it's CLOSE!) So, then everyone heads home. Buses. Cars. Trucks. Then it turns out that they are going to Jefferson, their arch-rivil. Then the gang of friends are really bummed. But they discover alot of cool things there. Sensing mothers for the water fountains, a place to have out during free periods, auditorium sets that recline. Then there is a basketball game within the two schools. Jefferson won, 129 to 43. Wow. That is amazing. So then P.S. 38 to a snow sculpture contest. Oh, did I mention that Chad hurt his tailbone and there is this person named Nolan that keeps on Harrising (how DO you spell it, anyway?)? Maybe I didn't. Well that does happen. So then at some point Dee Dee says to the gang- "they have an Achilles' heel!" What do as THAT mean? The rest of the gang is a bit confused. So Nate decides to ask his sister, Ellen. She gives him a report on Achilles. This is what is means- " when people say you have an Achilles heel, you have a little weekness that could cause you BIG trouble." that's cool, right? So then the snow sculpture contest comes. The P.S. 38 school makes an Achilles snow sculpture, whereas the Jefferson school covers a knight. That's there Achilles's heel! Cool, right? So then the P.S. 38 school wins the contest. Oh! I almost forgot. Nate hurts his right wrist. Ow. It was from jumping off a stable to get Chads 'pillow' (the things he needs to put pressure of his tailbone.). So, since Nate is right handed, that makes a problem. Anyway, so nate and the gang goes back to the P.S. 38 school. And they have a good ending! So those are the highlights. I hope you liked this book as much as I did. Thank you for reading this review. Happy reading!
Read more
8 people found this helpful
Helpful
Report abuse

hhone
5.0 out of 5 stars My son loves these.. great 👍
Reviewed in the United States 🇺🇸 on April 1, 2022
Verified Purchase
My son flies thru these books they are a cute series..
Read more
Helpful
Report abuse

Kaui
4.0 out of 5 stars I am a Nate series owner now
Reviewed in the United States 🇺🇸 on May 1, 2013
Verified Purchase
As a general rule, I pooh-pooh "graphic" novels. To me, that's a euphemism for comics (Archie, anyone?) and really, all kids should be reading LITERATURE!!! Enter in one of my twin boys. He's a "reluctant reader" who took to Nate. He begged me to read Nate. Months of procrastination later, I picked on up and was surprised to find that I thought the books were honestly funny and, so long as the parent discusses with the child the meaning of sarcasm, irony and sardonic wit (and how that's all great in a book but NOT GOOD in real life) then the books are not only harmless, but a solidly constructive step towards reading "real" books. I know, readers of my review will be appalled at my literary snobbery. What can I say. I am a wanna-be erudite.

So, for "reluctant" readers, especially boys, this would be a relatively benign choice (v. Wimpy Kid which I don't like as much). For any other child, this is a reasonable addition as a funny alternative to literature. These would be good on a family vacation when everyone relaxes with a book in the afternoon. I would say target age is from 7-10ish. My boys are 8 and 10 and loved them.
Read more
Helpful
Report abuse

Jennifer O Pritchard
5.0 out of 5 stars My favorite Big Nate
Reviewed in the United States 🇺🇸 on July 24, 2020
Verified Purchase
This book is so good! I have read it about 5 times. Its just that good. Also the reveiw by fortune teller is really helpful so if you are debating whether to get this book or not than you should read that review!!!!!!!
Read more
Helpful
Report abuse

anthony b.
3.0 out of 5 stars Not as good as the newspaper comic collections but still good.
Reviewed in the United States 🇺🇸 on January 6, 2021
Verified Purchase
The Wikipedia synopsis makes this sound better but it’s still classic and entertaining Big Nate, especially for younger readers. I loved the character of DeeDee and the art contest at the end.
Read more
Helpful
Report abuse
See all reviews

LouLou
5.0 out of 5 stars Great series
Reviewed in the United Kingdom 🇬🇧 on July 31, 2012
Verified Purchase
My son (9Yrs) likes reading but it is not his top priority . I bought one of these Big Nate books for him on a whim because I heard about other kids in his class reading them and I'm so glad I did. He read "Big Nate - the boy with the biggest head in the world" in 2 days and wouldn't put it down. I am now buying other books in the series for him to read at home and at school. Great series, highly recommend.
Read more
3 people found this helpful
Report abuse

Matthias
5.0 out of 5 stars Loved it!
Reviewed in the United Kingdom 🇬🇧 on November 20, 2020
Verified Purchase
Bought for younger brother, he loved it!
Read more
Report abuse

Josefa Friera
5.0 out of 5 stars Big nate
Reviewed in the United Kingdom 🇬🇧 on December 20, 2012
Verified Purchase
Big nate is a really good book it is so cool u know I love that book so much I was so funny he taught them a lesson so he wanted to see a good statue it was a good book I loved it I hope to see a new book out soon I rate this book 100000%
Read more
Report abuse

Amazon Customer
4.0 out of 5 stars Shoes not work on Kindle
Reviewed in the United Kingdom 🇬🇧 on December 10, 2012
Verified Purchase
Bought for my son from my account on my phone to find this was the only device he could read it on so had to lend it to him til he had done, didn't take long as he enjoyed it
Read more
Report abuse
See all reviews