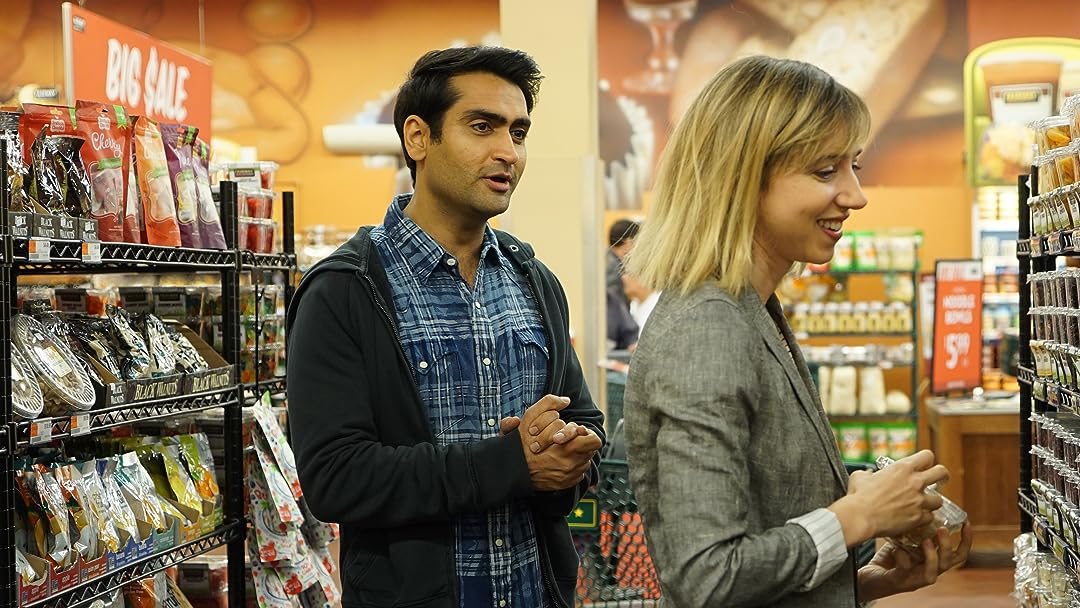 (3,616)
7.51 h 59 min2017X-RayHDRUHDR
The Big Sick is based on the real-life courtship between Pakistan-born comedian Kumail Nanjiani (Nanjiani) and grad student Emily Gordon (Zoe Kazan) who fall in love but struggle as their cultures clash. When Emily contracts a mysterious illness, Kumail finds himself forced to face her feisty parents, his family’s expectations, and his true feelings.

Happy HikerReviewed in the United States on December 11, 2017
4.0 out of 5 stars
Charming and Moving
Verified purchase
I went into this not knowing what to expect. I was pleasantly surprised by how charming and moving this film is.

It's not a depressing movie, which is what I was afraid of. It's warm, funny and thoughtful.

It addresses family - what it is and what it means. It addresses how difficult it is to define yourself as a person who has a different plan than the plan your parents want for you.

I have been a caregiver, and the hospital scenes were very realistic. You have to make a tough decision, and there's no time to consult with anyone. There's a lot of waiting around. There's a lot of trying to understand what all the doctors and medical professionals are telling you. There are a lot of emotional outbursts. There's constant uncertainty.

I'm not familiar with Kumail Nanjjani, but I'm assuming he brought a lot of his personal experience into this. He and Zoe Kazan seemed to have good chemistry. I know her from "Ruby Sparks," and just that. Holly Hunter is amazing - as always. Ray Romano surprised me with the depth he brought to his role.

It was nice to watch a romance that wasn't saccharine or stupid.

CJJTIReviewed in the United States on January 6, 2019
1.0 out of 5 stars
Blah, blah, blah - YOU NEED TO READ THIS REVIEW
Verified purchase
I seriously cannot believe that I just sat thru this movie. If you like artsy fartsy movies with international casts, then this movie is for you. I have nothing against international cultures, but this movie lacked a lot. It’s a basic “Boy meets Girl”, they hook up the first night that they meet, they’re not supposed to be together - but they end up together in the end - despite the odds. I think I would’ve rather read a 5-minute article about them in a magazine versus watching this because it offered very little excitement, zero suspense, and I will never get the last two hours of my life back. Seriously, there was too much meaningless “fluff” in this movie that it became way too boring.
68 people found this helpful

ExtrapencilReviewed in the United States on December 10, 2017
5.0 out of 5 stars
An instant favorite
Verified purchase
I watched this movie four times and loved it every time. (Weird perhaps, but I don't like horror, violence, stupid humor, sappy romances, or vampires, so I'm kind of limited.) As other reviewers have said, the two leads are so likeable and share such a natural chemistry, it's a pleasure to watch--and painful when the inevitable rifts drive them apart (spoiler alert but no surprise... they get back together). Holly Hunter and Ray Romano as Emily's parents are flat-out fabulous, helping the movie walk that narrow line between drama and comedy. The very honest depiction of their long-term marriage, with its all its baggage and all its love, is deeply touching. They're also hilarious.

Keeping Kumail's family from coming off as fanatic was tricky and masterfully handled. Yes, his parents insist he marry a Pakistani girl--and, in a very funny side story, his mom arranges for a constant stream of single Pakistani girls to drop by since they "just happen to be in the neighborhood." But the Muslim family is neither rigid nor extremist; rather, they come across much like so many loving parents with very definite opinions on their children's choices. Even the loser roommate is impossible to dislike. So with an entire cast of likeable characters and a plot based on a wonderful, unlikely (and real-life) romance, how could this movie not be a winner? Watch it AT LEAST once!
116 people found this helpful

MaryMoReviewed in the United States on January 4, 2018
5.0 out of 5 stars
Laugh, cry, and fall in love in an hour
Verified purchase
Here's the thing, today's movies are so polarized between raunchy comedy, or vulnerable emotional drama, or love story, etc.

The Big Sick reminds me of the great date-night movies from the 1990's. It brings emotional depth with laughs the entire way through. This is a modern-day, true story that everyone with a family can relate to, whether you've been in an inter-racial couple or not. Love is love, and family is crazy, lol.

Movies today have forgotten how to make us laugh, cry, and fall in love in the same hour. I want to see more movies like this one PLEASE!

It has heart, and soul, and after watching it an entire month ago, I'm just now writing this review. How many movies do you even remember after a month? Hoping to watch it again. Would recommend it!
70 people found this helpful

True-northReviewed in the United States on December 11, 2017
5.0 out of 5 stars
Excellent Movie, Excellent Acting,... Well Worth Watching.
Verified purchase
The "Big Sick" movie is one of those little gems. It builds a story slowly, and each character in the story creates just the "right mix" of an ensemble cast, not defined by the number of lines each character speaks, but by the balancing and their contribution to the plot. It has a "real" quality in that characters are not perfect, nor perfectly beautiful, as most modern movies tend to select their actors based on image, verses content of acting ability. Fortunately, the movie has a happy ending, though it walks through a potential tragic ending, - the suspense that builds makes one wonder if a good ending will happen at all.
Well worth watching, and though it would qualify as a quiet sleeper movie, one that slides in through the crack in the door.... the skills and talents of the actors, the script and the director, make it a good watch. I highly recommend this movie to add to your watch list. Potentially, I think a sequel could be made, carrying the storyline into a future time, .... for one hopes that the main characters parents will soften their stance towards their son, based on their family's religious beliefs. I would call this movie a comedy/drama.
33 people found this helpful

S. JosephReviewed in the United States on November 16, 2017
5.0 out of 5 stars
The movie that explains why dating sucks for me
Verified purchase
First of all I want to say, great acting, great story and always good to see a happy ending. As a fresh off the boat Indian living in Philly for my adult life, it's hard enough as it is explaining to women why I don't have an accent or that I love juicy meat or that i'm Catholic. But now I have to explain about these certain type of guys who date American women, convince them they're going to together and marry some chik of their own race because the parents want them too. I'm not even friends with guys like these and yet I have to defend myself as to why I am not like them to women I date. This movie depicts the typical douchebag that ghosts a woman when it's man-up time. Now I have a "test movie" I cam show and at the end say, "Soooooo that's not me."
26 people found this helpful

Amazon CustomerReviewed in the United States on April 15, 2020
1.0 out of 5 stars
The Big Sick is DOA - Ridiculous Plot - Stereotypical Characters - Too Few Laughs
Verified purchase
I was hoping this great cast could pull this one off but sadly no. The idea that distraught parents would leave the ICU bedside of their daughter who's in a medically induced coma and facing life threatening surgery the next day, to then go hang out in a comedy club, drink wine and have some mindless banter with the daughter's ex-boyfriend is so preposterous that they completely lost me. I have to confess that I actually was in a medically induced coma in a life threatening situation a few years ago so maybe that altered my perception. I can (thankfully) say the last thing my adult children and fiancée would have done is leave me for one moment. The story has way too many stereotypes to suffer through for the few laughs provided. A big disappointment.
10 people found this helpful

seaheatherReviewed in the United States on August 31, 2019
4.0 out of 5 stars
MUTED EXPECTATIONS
Verified purchase
There are many great things about this film: the acting, rich character development, humor, honesty. With such a promising start, however, the audience feels entitled to expect more. The long hiatus in the middle of the movie, in which Emily is out of the picture, shifts the focus to her boyfriend, Kamail, and to her parents. This tends to draw us into a sub plot involving three adults trying to weather a crisis and that is so compelling on its own terms we almost forget about the original couple. The impact of this subplot -- engaging and believable -- has the downside of deflating the central romance when it returns to center stage. The initial chemistry between Emily and Kamail never recharges to the level in which it began and -- although there are valid reasons this is occurring -- the dramatic result is a loss of impact and focus. Both of the lovers seem -- for valid reasons -- off their game. The gradual rekindling of their affection after the crisis is overshadowed by the joy of Emily's parents in finding their daughter restored to them. Thus it is the parents, not the adult children, who take up the emotional energy in the room. This reality , along with the relentless rejection of Kamail by his righteous family, mutes what might have otherwise been a more satisfying ending.
5 people found this helpful
See all reviews
Back to top
Get to Know Us
Make Money with Us
Amazon Payment Products
Let Us Help You
EnglishChoose a language for shopping. United StatesChoose a country/region for shopping.
© 1996-2022, Amazon.com, Inc. or its affiliates