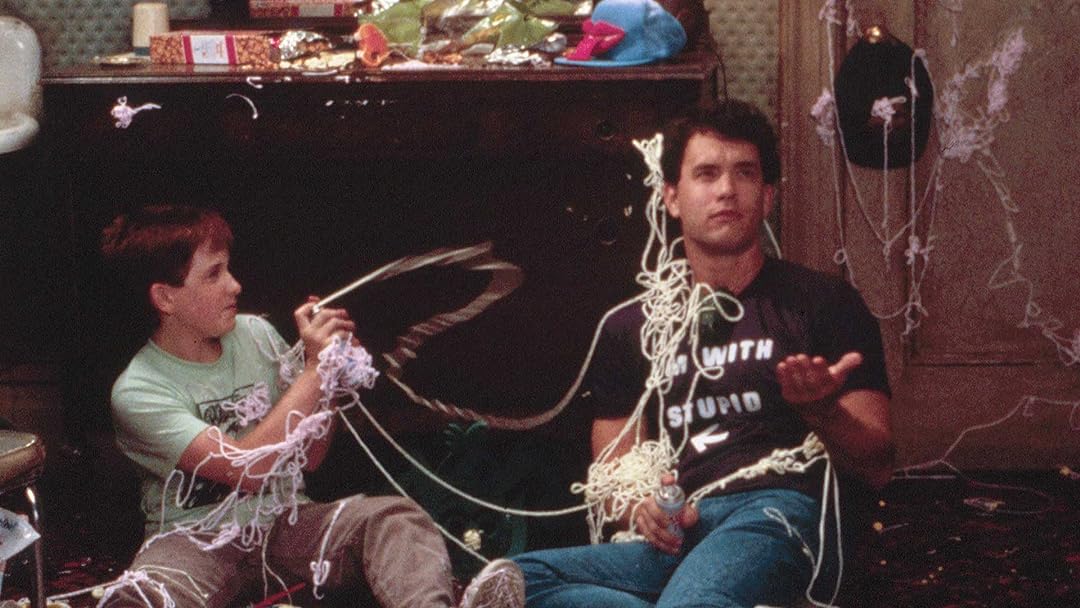 (7,432)
7.31 h 44 min1988X-RayPG
A boy's wish is answered when magically he becomes a grown man and finds work designing toys - but the benefits of adulthood may be highly overrated in this classic comedy. Directed by Penny Marshall.

Michael GriswoldReviewed in the United States on October 18, 2015
4.0 out of 5 stars
The Perils of Growing Up
Verified purchase
Maybe I always read too much into what was supposed to be a fairly light 1980’s movie. Everyone has been a kid and unable to do something because of their size and age and wish we were grown because grown-ups can do everything, right? Big presents the perils of wanting to grow up too soon and the dangers of thinking too much like an adult. Of course no one can avoid growing up, but it really does make one pause and consider the things that we lose as we grow up.

While its meant to be a comedy, there’s an underlying darkness or melancholy that surrounds elements of this movie because Josh knows he doesn’t belong in the adult world because he’s 12, but yet he feels things in the adult world that can’t be taken back. I prefer to think of Big as a message to never lose that childhood element of yourself that is imaginative and creative mixed with the spirit of anything is possible. All too often it vanishes with age.

These are just a few thoughts I have.

Hanks perfectly captures the innocence of youth. He has such a look of surprise when he first looks in the mirror and he’s been transformed into an adult. Then he’s completely terrified when he has to spend a night at a rundown hotel in Manhattan. You can completely believe that he’s a kid trapped inside his body. There’s also the iconic scene of Hanks playing on the giant piano at FAO Schwartz. Not remembered but actually much funnier is when Hanks and John Heard get in a fight at a playground. Hanks does this thing by holding a ball out of reach of Heard that I remember from when I was a kid. Big really is a classic for many reasons.

OrrymainReviewed in the United States on February 7, 2016
5.0 out of 5 stars
Big Gets Five Stars Even With a Couple of Flaws
Verified purchase
As a person who loves extras on DVDs, this product is a real winner. It has both a Blu-ray and DVD disk. The DVD only has a trailer as an extra as all the other bonus items are on the Blu-ray copy. These disks come in the normal smaller Blu-Ray keepsake box and each has its slot to fit into. I had absolutely no play issues with either disk.

The movie, of course, is wonderful. It's a great comedy and pretty much my type of movie. There's not much I'd change, except for a line of profanity that I never like. Regardless, my review here is focused on the bonus material and the set itself.

The one thing I really disliked about the set up of the extras was that instead of utilizing the entire screen to show a list of the extras, there is just a small box near the bottom that had two lines only of description. You have to use the down arrow to move from item to item and sometimes from left to right to make a selection. This was not user friendly in my view. Also, while they had a wonderful play all option for deleted scenes that even included the option of whether or not to include director Penny Marshall's comments, they did not include a play all button for all of the trailers and TV spots.

The rest is pretty much all good. There are several featurettes on how the movie came to be with Gary Ross and Anne Spielberg being interviewed. As mentioned, there are several deleted scenes, including some with the Marshall intros. Frances Fisher is included in one of those. There is a featurette that deals with the real life toy makers, like the ones depicted in the film. An episode of Hollywood Backstories focused on Big is included. There's also a short piece on a carnival that was part of the premier with Tom Hanks.

The Blu-ray disk contains both the original theatrical cut and the extended version that has all of the deleted scenes included in the movie. In addition, there is commentary by Ross and Spielberg. However, the commentary is not like what is normally found. In the features, you hear a lot about audiotapes that Spielberg made while she and Ross were brainstorming and developing Big. In the commentary, they actually play several large sections of the tapes. Then they talk about it. It is not a case of them watching the movie and then talking about what is happening; rather, it's the playing of the tapes and then talking about how things happened. It's pretty fascinating if you enjoy really learning about the evolution of a project.

Finally, there are a couple of Zoltar Speaks cards included.

My only regret about the extras is that apparently Tom Hanks did not participate at all. He's seen in vintage clips from the day, but he did not do any of the updated clips from when the disks were released. I did enjoy seeing the two young boys featured as Josh and Billy, now grown up, in the extras.

The extras were well done and made me a happy one for adding this movie to my collection. Even with my frustration at the special features set up and the lack of Hanks' participation, I'm still giving it 5 stars.

Dr. PaulReviewed in the United States on April 7, 2021
5.0 out of 5 stars
Tom Hanks still charms after all these years...
Verified purchase
I’ll never forget the first time I watched Big and how I fell in love with the talent of Tom Hanks. He’d been around, but this guy was already starting to stand out as a spectacular talent - you just knew he was going to have an amazing career. What he brought to Big all those years ago he brings to every role, in a different way. But here - for me in many ways - is where it all started. At least, that’s how I remember it. Now all these years later, spending time with Big is like hanging with an old friend - just as warm, comfortable, and memorable. I’m so glad Amazon had a nice deal because we’ve added it to our streaming library.

What happens when one young boy decides life would be better if he were Big? That’s the simple, but brilliant premise here. It’s brilliant because I highly doubt ANY of us hasn’t thought of that at least once in our lives... but when you’re younger you can’t wait to be Big and when you’re older... you finally get it. So anyone watching - or rewatching at another time of life - will come away with various outlooks on how this question would be, play out, and make life be. Tom Hanks being the kid in the man’s body was pretty much meant to play the role - he inhabits this young boy as likely no one else would or could. All these years later, my wife and I have enjoyed the visit again... and we look forward to even more. Tom Hanks lets us relive that dream of being older when young, and appreciating being older when you get there... tell me he isn’t an amazing talent...

FanTomReviewed in the United States on April 30, 2016
5.0 out of 5 stars
This Movie is TIMELESS
Verified purchase
BIG is a classic movie that will remain a classic for years to come. The concept and premise of this movie is so relatable to kids today, especially if they are short for their age or simply those who wish they could grow up faster than they are. While there is some adult humor that suggests that this movie is more for adults looking back on their childhood rather than kids looking forward to their adulthood, it really suggests to the adult world that life can be a whole lot less complicated than we actually make it. It is worth a trip to IMDb app to see all the goofs and trivia associated with the making of this movie. Big definitely needs to be a movie that remains in your home library for years to come.
5 people found this helpful

Got2beReviewed in the United States on June 3, 2020
5.0 out of 5 stars
Funny movie that also gives a message
Verified purchase
This is classic, a great movie for relaxing. The puns and the just the silly things that Josh (Tom Hanks) did made the movie really enjoyable. The character interactions between Josh and Susan (Elizabeth Perkins) was what made me laugh. Though it was slightly awkward for a 13 year old boy and a women to be having an affair, I think love is a experience that you only get when you're older. I believe that if Josh only chose to go back to being a 13 year old because he was afraid of working, his character wouldn't be as well developed.

From the beginning to the end of the movie, clearly Josh turns from a child who wishes to grow up faster to one who faces the adult world and learns to cherish his youth. This character development that adds much value and makes the movie more meaningful. The message that I got from this movie is that we need to cherish childhood before it slips away and we become burdened by the responsibilities of adulthood.
One person found this helpful

J.KirleyReviewed in the United States on September 5, 2021
5.0 out of 5 stars
I never tire of this Tom Hanks triumph
Verified purchase
This marvelously cast treasure is a wonderful look at a young Tom Hanks and a masterful directing accomplishment by the late Penny Marshall. This movie established female directors as forces to be reckoned with, as it was the first female-directed movie grossing over $100 million at the box office. And she was inspiring in her methods, which included first filming the adult Josh scenes played by the young Josh so Tom Hanks could see how the kid would behave; but that adorable scene where he nibbles the baby corn as if it were a normal-sized corn on the cob was all Tom's doing, as was the 'Shimmy Shimmy Coco Pop' rap. This uplifting movie never gets old for me - no pun intended.
One person found this helpful

HippieFlowerChildReviewed in the United States on November 25, 2020
5.0 out of 5 stars
Heart and Soul 🎹: Big Movie Review
Verified purchase
I love this movie. It's been years since I have seen it last. Love Tom Hanks, he was perfect for this movie as well as the other actors and actresses. A well written movie, fun and enjoyable to watch. Be careful what you wish for, it might come true, and it might not be what you expect. Or it can be an experience of a lifetime, both good and bad. But yes an enjoyable movie to watch, for nostalgic reasons. Also, not to be in a hurry to grow up, but to enjoy the years of innocence and childhood.
One person found this helpful
See all reviews
Back to top
Get to Know Us
Make Money with Us
Amazon Payment Products
Let Us Help You
EnglishChoose a language for shopping. United StatesChoose a country/region for shopping.
© 1996-2022, Amazon.com, Inc. or its affiliates