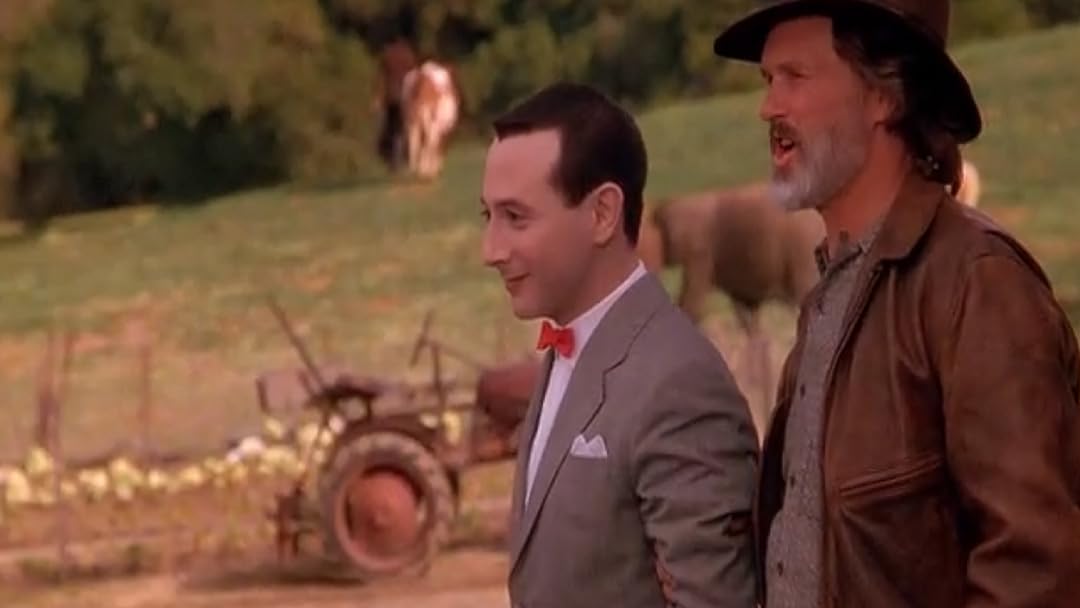 (810)
5.01 h 26 min1988X-RayPG
Pee-wee Herman is now a small-town farmer with a fiancée, but when a traveling circus comes to town, he finds himself falling for the trapeze artist.

Watch with SHOWTIME
Start your 7-day free trial
Add to
Watchlist
Redeem a gift card or promotion code
By ordering or viewing, you agree to our Terms. Sold by Amazon.com Services LLC.
Write review

Maria V. BoueReviewed in the United States on September 10, 2018
1.0 out of 5 stars
Prime streaming quality terrible
Verified purchase
One star for the horrible quality of the Prime streaming version. Thought it would catch up once playing and clear up but no. Looks like a bad vhs tape. Seriously?
59 people found this helpful

TaraReviewed in the United States on June 7, 2021
1.0 out of 5 stars
Imbecilic
Verified purchase
I'm surprised by the five-star rating. This movie has nothing to offer adults. And I'm quite positive I would have disliked it even as a kid. The humor is imbecilic and immature.

A couple of disclaimers: I only made it 20 minutes in (I really wanted to like it, but I couldn't bear to watch more). Also, I haven't seen any of the other Pee-Wee Herman movies.

I've seen Starship Troopers... I can handle "campy". I've seen the Austin Powers moves... I can handle "immature" humor. But this movie was just too much. There were funny, quirky parts that were interesting, but it wasn't enough to redeem the rest. And the story-line (so far) just seemed random and vague, like stream of consciousness.

RobReviewed in the United States on November 30, 2020
1.0 out of 5 stars
Certainly not Big Adventure or Big Holiday
Verified purchase
Loved Big Adventure and Big Holiday, but this was terrible. I don't mean bad, I mean terrible. I tried to give it many chances and turned it off about a half hour into the movie. Paul Reubens is a genius, and I can't believe he co-wrote this. Seems he was credited as a ghost writer but McGrath did all the writing. I've never seen anything so stupid. This was horrible.
2 people found this helpful

A. NavarroReviewed in the United States on January 10, 2021
1.0 out of 5 stars
Pee-wee in a romantic comedy.
Verified purchase
I hated this when I was a kid - that's about all I could remember before watching it again. It took me a while to figure out what makes this one so terrible, it's because it's a romantic comedy - nuff said.
3 people found this helpful

M. GandolReviewed in the United States on May 16, 2016
5.0 out of 5 stars
Big Top
Verified purchase
I had seen this movie when it first came out and wasn't really impressed because it wasn't the typical Pee Wee Herman that you saw in the TV show or his first movie Pee Wee's Big Adventure. But after just seeing the movie now I found it quite entertaining, especially with all the crap the movie industry has been churning out the last few years. Sure it's not the typical Pee Wee Herman stuff but it's cool because he actually gets with a woman in this, with an actually fairly intense make out scene, lol. I just saw the new Pee Wee Herman movie Pee Wee's Big Holiday I think it's called and that one was great , really funny and a lot like the first one. I have always been a fan of Paul Ruebens and I am glad to see that he still being creative and sticking to what he does best. I know you are, but what am I ?
5 people found this helpful

Retired Soldier/Sailor.Reviewed in the United States on May 2, 2017
4.0 out of 5 stars
Children-of-all-ages will enjoy THIS... unless they don't. I know who THEY are; but, do YOU?
Verified purchase
I am not ready to buy up all of the Pee-wee Herman's TV series episodes, but, I DO
have all of his movies... Paul Reubens, that is... and his voice-overs in "The Navigator".
Yeah, even that cameo in the movie "Buffy The Vampire Slayer" where he's a vampire!
I, also, recommend his---more recent---BROADWAY show.
I actually enjoyed this MORE-----this time-----than when I saw it in its theatrical run. Of
course, if you are NOT a "Pee-wee Herman" fan this will probably be a 2.5-star movie to
YOU.
6 people found this helpful

Ham SammichReviewed in the United States on January 30, 2004
4.0 out of 5 stars
Lighten Up!
Verified purchase
Granted, Big Top Pee Wee does not promise the type of guffaw humor we enjoyed in Pee-Wee's Big Adventure, but it is a really good movie. The humor is a bit more mature. This might be considered a weakness of the film on the surface. It is the immaturity of the humor that we loved so much in Big Adventure. However, having been of the target age when Big Adventure and subsequently Big Top came out, as I grew up, so did Pee-Wee.
My favorite is still the opening dream-sequence in which Pee-Wee is incognito, dressed as Abraham Lincoln to avoid his inexplicably large group of post-adolescent female fans who are waiting for him outside of the venue in which he performed his trapeze act. One fan, unaffected by the fact that a man who had been dead for almost a hundred years at that point, breathlessly asks for "Lincoln's" autograph, professing "I'm such a big fan!" Pee-Wee's phony Lincoln beard is then ripped off and the girls shriek with delight and chase after him.
This opening sequence, though not the only highlight of this campy delight, truly captures the essence of Pee-Wee humor. It is above all bizarre. But the uniqueness of Pee-Wee's world is its ability to transcend time, dimension, and most of all, logic. This was true in Pee-Wee's Playhouse and Big Adventure, but I think Big Top captures this most.
The common dream sequence as an opening scene to each movie sets the tone for each movie. When comparing the two, the dream sequence that opens Big Adventure pales in comparison. Big Top maintains the surrealistic tone of the Lincoln scene throughout the film. The circus owner's wife, Midge Montana is just a few inches tall. Innuendoes between her and her husband set the imagination free. Pee-Wee's compulsively keeps lunch date records in his personal organizer, despite the fact that he has lunch at the same time with the neurotic girlfriend. Pee-Wee's inexplicable agricultural genius made for one of the most enduring images of my childhood-the hotdog tree. This is really funny stuff.
The movie is not without its faults, of course. Most of them are found in the somewhat schlocky romance between Pee-Wee and the female acrobat. I also didn't care for the ending, where Pee-Wee solves the circus' financial crisis by turning all of the grumpy towns people into children. It sort of gives off a creepy Cocoon-like feeling, which I didn't particularly appreciate as an end-note.
But otherwise, I hold this movie dear. Almost as dear as his first movie, but in movies we rarely see a sequel (of sorts) outshine the original.
13 people found this helpful

gwenReviewed in the United States on June 3, 2020
5.0 out of 5 stars
It's Pee-wee
Verified purchase
If you like silly comedy, scientific experiments, childhood screech from "Saved by the Bell", egg salad sandwiches, circuses and the pickala-poopala brothers, you'll in the right place.
It's Pee-wee yo!!
2 people found this helpful
See all reviews
Back to top
Get to Know Us
Make Money with Us
Amazon Payment Products
Let Us Help You
EnglishChoose a language for shopping. United StatesChoose a country/region for shopping.
© 1996-2022, Amazon.com, Inc. or its affiliates