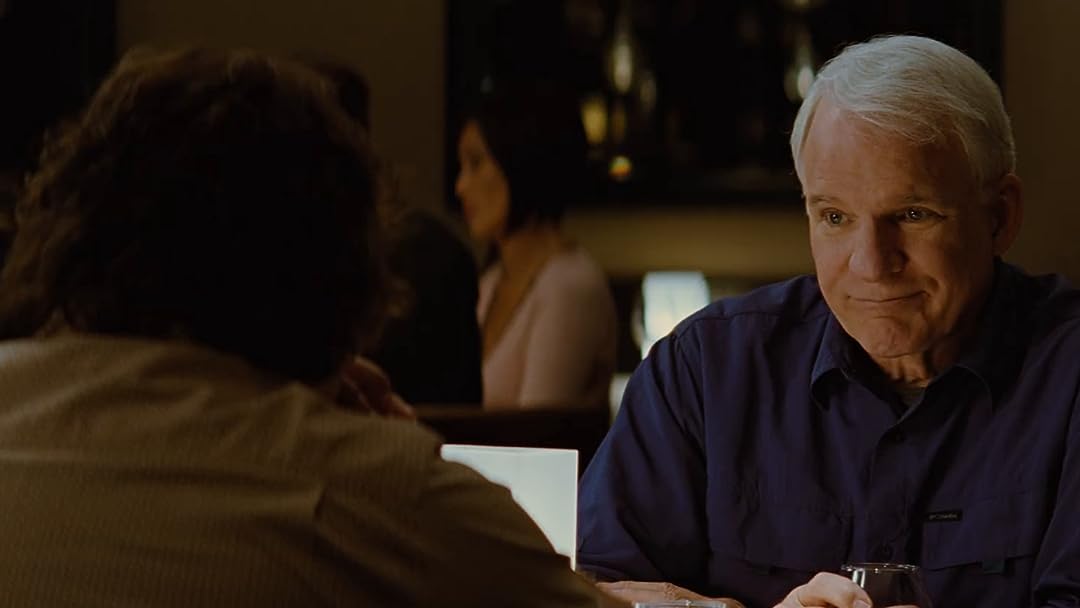 Tony IovinoReviewed in the United States on September 9, 2017
5.0 out of 5 stars
Made me a birder
Verified purchase
Just watched The Big Year, starring Jack Black, Steve Martin & Owen Wilson, again, for maybe the 80th time.

Five years ago this month I watched it for the first time. And it changed my life. Sounds funny to say that about a movie. But it did.

It made me a birder.

Yes, I know that it is a strange, nerdy thing to be. But I was reflecting on what I’ve seen over the past five years:

I’ve seen albatrosses 40 miles off the coast of Northern California
Flycatchers at sewage treatment plants in Austin, Texas
Snowy Owls in Wisconsin and at Jones Beach
A Bald Eagle and I spent 20 minutes together, alone, in a frozen Minnesota field—he high up on a tree, me down below mesmerized
I watched American Oystercatchers burying their bright red beaks in a sand bar off the coast of Cape May
I’ve stood in a field outside Utica, NY, wholly alone at dawn, watching Barn Swallows dance in the early morning sunlight
I’ve hiked around a spider-infested path on High Island, Texas, watching tropical Cormorants in bright green scum covered water, dodging spiders larger than my hand, on the lookout for snakes and alligators
I’ve been on ferries, spying seabirds
I’ve clung to the granite sides of an overpass, sliding my feet across an ice-covered 8-inch wide ledge, 100 feet over a reservoir in Minnesota, so I could see an owl
I’ve spent a day on a wildlife refuge in Kansas, and I’ve spent a morning next to a fog-covered lake in Arkansas
I’ve watched hundreds of thousands of Sandhill Cranes take flight at sunrise along the Platte River in Nebraska
I’ve birded across the country, in over 30 states.
And, I’ve spent time enjoy House Finches and House Sparrows play in my backyard, and Northern Cardinals in the snow on my patio.

I’ve met a bunch of quirky, kind, friendly people who share this obsession. I can’t imagine I would have ever hiked a mountain in Nevada as the snow fell, an hour after I played with a Greater Roadrunner in the desert, or wandered down a quiet road next to a farm outside of Buffalo, if it weren’t for birding.

I’ve seen more of America in the last 5 years than I did in a lifetime before that.

And I couldn’t have done it without 2 things: the patience and support of my wife, who never fails encourage me.

And the movie, The Big Year.

For those of you who haven’t seen it, if follows the true story of 3 guys trying to see the greatest number of different bird species in North America in a year. The story is funny, and touching. The photography is outstanding. It inspired me to get off the couch and go for a little hike in the Rockville Centre woods, where I saw my first woodpecker. I was hooked.

And thank you Jack Black, Steve Martin, Owen Wilson and all who made “The Big Year”. I hope you made some money. I hope you had fun making the movie. And I hope you know that your little comedy has changed at least one life for the better.

ShellReviewed in the United States on November 25, 2016
5.0 out of 5 stars
Don't miss out on a great movie!
Verified purchase
Wow...seriously wow! Such a great movie! I just came across this as a recommendation on this site. I had it on my watch list for a while, hemming and hawing about actually watching it. Honestly, by the description, it didn't sound like it would be that great. I kept it on there for all three main stars. I mean, those guys? They're all quite funny as well as good at being serious.
One night, the boyfriend and I were wanting to watch a movie. I showed him the trailer for this, and he said let's try it. We were both so blown away! We agreed it was one of the best movies we've seen in a long time.
What's so refreshing about it for sure is that it's a really great movie that doesn't need any nudity, graphic violence (honestly, not sure if there was any violence at all), or foul language to be great! That's amazing to have a movie now days like that. (not that I'm a prude or anything. Just always still impressed when a movie can show it can still be done). So, that being said, it's a great movie for anyone, young or old. It's a great family movie, date night movie, well...anytime movie. Who would have thought a movie centering around birding, huh? Please don't let that stop you from watching this gem! It is far from boring. The boyfriend and I were both surprised at how much suspense was in it and how it really got us both. A few surprises for sure. Also, many funny scenes as well as touching life lessons. One of them learns a pretty hard lesson for sure.
Such a shame this didn't get a better chance at the box office.
58 people found this helpful

David E. BaldwinReviewed in the United States on December 10, 2017
5.0 out of 5 stars
This Birding Film Soars
Verified purchase
Prior to this film my knowledge of birding consisted of Miss Hathaway and her bird watching club on "The Beverly Hillbillies". After watching this charming film I've developed a knew found respect for the fanciers of our fine feathered friends. The film concerns three guys who take a year off from life as we know it, more or less, to partake in a Big Year which is a competition among birders to spot and photograph the most species of aviary. Jack Black's character is a thirtysomething divorcee stuck in a dead end job whose dream is to partake in a Big Year. Ditto for Steve Martin's high powered New York CEO who wants a Big Year before retiring to his family and grandchildren. Owen Wilson's character's quest is more obsessive, however. He's a professional birder out to protect his world record even at the cost of jeopardizing his marriage. All three actors are in fine agreeable form here with complex nuanced turns all. The fine work of the relatively numerous supporting cast is effective as well. It's always good to see Brian Dennehy and Angelica Huston in top form. Loved John Cleese's engagingly tongue-in-cheek narration of the film. This one barely caused a ripple upon initial release in the Fall of 2011 probably a case of the studio not knowing how to market such an iconoclastic project. Those bemoaning the dearth of quality films should look no further than this wonderful film.
24 people found this helpful

Jason W.Reviewed in the United States on June 21, 2020
5.0 out of 5 stars
Fun movie, nice to see these guys in non-slap stick comedy!
Verified purchase
This was a really enjoyable movie, and I loved having the actors in more serious roles than they're type casting typicals! The story is more of one for people who already have some interest in the birding hobby, and is not the fastest pace movie but the story is well laid out and the characters are well built.

The extended edition didn't really add anything to the show though, so unless you want to see some CGI hummingbird, and John Cleese's voice over, then stick with the original. Jack Black's story telling makes the story feel more personable and builds the characters better.
9 people found this helpful

Rural MomReviewed in the United States on November 13, 2021
5.0 out of 5 stars
Great Film
Verified purchase
We watched this as a family (with teenagers). Loved it. Phenomenal, jaw-dropping cast! The talent is a mile deep. The film is centered around a competition, three competitors pitted against each other. But the real story is the character arcs — Fantastic writing. Great pacing. Humor. Adventure. Tension. The story was heartfelt without taking itself too seriously. The ending was perfection, too. Not too syrupy, but satisfying. Definite watch.
6 people found this helpful

Happy HikerReviewed in the United States on November 21, 2021
5.0 out of 5 stars
Great cast, good story, and a lot of fun to watch.
Verified purchase
I adore Steve Martin. He makes everything he's in so much better, and this movie is no exception.

I didn't know what to expect. I thought it would be a dumbed Hollywood movie, but it was completely enjoyable and fun to watch. It has heart and soul.

While I'm not a birder, I am a casual bird watcher, and that's one of the reasons why I thought this would appeal to me. That said, people who have never thought about birds will like this movie, too.

As for the other two leads, I was pleasantly surprised. Jack Black, I can only take when he plays a nice guy. When he plays a jerk, I can't stand him. Owen Wilson? He's quirky.

These are the three main starts, but there are plenty of supporting roles featuring names we know and admire: Anjelica Huston, Diane Wiest, Rashida Jones, Brian Dennehy, Joe Beth Williams, Kevin Pollak, Joel McHale, Rosamund Pike, Jim Parsons, John Cleese, and so many more, including Corbin Bernson in a fun little scene. It has a fantastic cast.
3 people found this helpful

Todd M.Reviewed in the United States on August 22, 2020
4.0 out of 5 stars
It was much better than we expected.
Verified purchase
Put together a good cast, tone down Owen Wilson, kept the script tight and a movie about birding can actually be interesting and even funny at times. We hedged on this one until the last day of our HBO subscription and it turned out to be one of the better movies we’ve seen in some time. It was light, moved along nicely, the narration was helpful and even the birds were interesting. It’s hard to believe what some will do to get a glimpse of a bird and try to see the most in a given year just to be number one… and it’s based on a true story.
6 people found this helpful

flymasterReviewed in the United States on November 11, 2021
4.0 out of 5 stars
A good movie but with trange cast choice
Verified purchase
After some time, finally a movie that is interesting with a good story line that it follows.
My biggest, and pretty much only criticism is the casting choice. The movie is not a comedy. It's not a movie taking itself seriously but all three main characters always play in crazy comedies. The whole time, I was waiting for something like that, some big upset in the story with crazy twist... But nothing. Jack Black is the only one who is closest to his usual character and even there, it's the way of acting rather than the character itself. I don't quite know what actors would fit to these roles. Just these three did not.
Nevertheless, the movie is the best I have seen in the past several months.
And if you're in birding just a little, definitely see it. If you're almost a pro birder, maybe it's all silly and you would hate it but I don't know; I'm not a birder. Even tho, I bought a pair of decent binoculars last year and enjoy watching birds in my backyard :)
2 people found this helpful
See all reviews
Back to top
Get to Know Us
Make Money with Us
Amazon Payment Products
Let Us Help You
EnglishChoose a language for shopping. United StatesChoose a country/region for shopping.
© 1996-2022, Amazon.com, Inc. or its affiliates