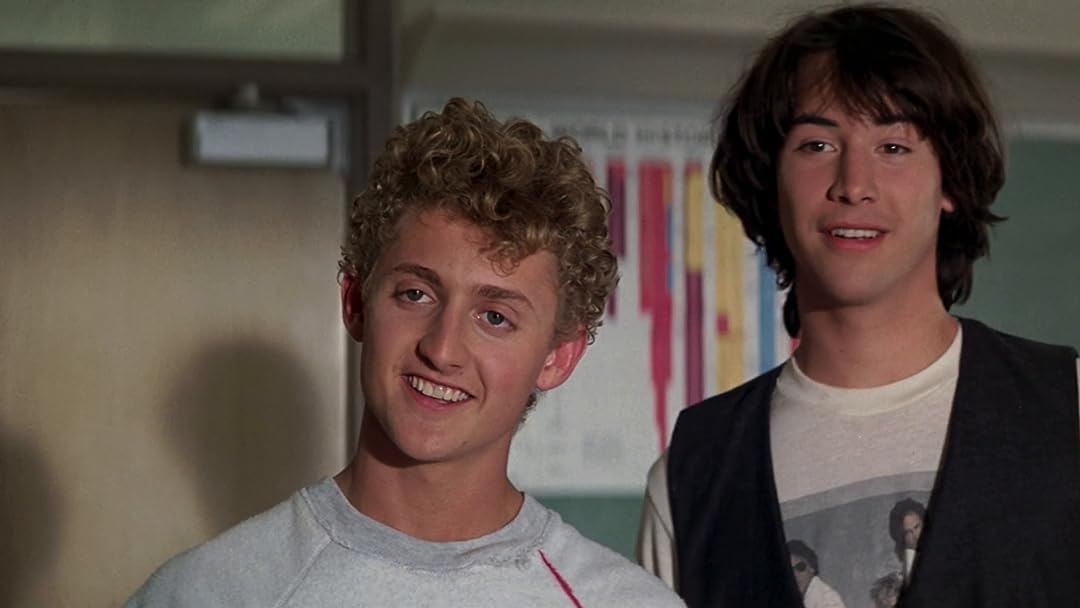 (13,098)
7.01 h 29 min1989X-RayPG
HD. Two time-traveling dudes gather various famous characters from throughout history in order to pass a test in this screwball comedy.

SilverscarfReviewed in the United States on May 20, 2018
5.0 out of 5 stars
A really fun movie if you love time travel.
Verified purchase
I'm not the biggest fan of the Bill and Ted movies, I mean I really enjoy watching the first one, but the second one is kind of meh for me. And when I found out about this Steelbook for the first movie I wasn't sure I was going to get it, but it was a really nice looking Steel and I just decided to go for it when the pre-order was an amazing deal.
The movie looks really good on blu-ray, I really only have the times when it was on TV to compare the quality to, but for just an older movie in general it is a very nice master of it, the sound quality is also great. Overall this is a great Steelbook for the movie and I recommend it.
15 people found this helpful

Amazon CustomerReviewed in the United States on June 29, 2019
5.0 out of 5 stars
One of the best movies Ever
Verified purchase
This story is epic. I mean, high school kids travel through time. It's pretty dope. I was 11 in 1989 when this came out. So I was the prime age for this film to find its way into my all time heartfelt faves. I came back to watch this in 2019 bc I wanted to remember why Keanu Reeves stood out in this film. In other words, why did he become this epic star and not also Alex Winter? Well, let's just say, Keanu has all the best and most quotable lines! And, of course, his adorably dopey facial expressions. A true winner. Be Excellent to each other, and party on, dudes--Abraham Lincoln.
9 people found this helpful

Richard KatzReviewed in the United States on January 28, 2018
5.0 out of 5 stars
If you're a fan of Keanu Reeves and DON'T know about this movie, haven't seen it -- then you MUST, ie SHOULD
Verified purchase
Since this movie came out years and years ago, Keanu Reeves became a star; hence, there are lots of people who admire and adore him who dont' know his early work. If you're one of those folks you should buy a copy of Bill and Ted and watch it a couple times. You'll find yourself becoming curious about what happened to his buddy; I think he was one of the people who brought us Repo Man, no? If Bill and Ted's Excellent Adventure brought Keanu Reeves to the world's attention, well, that was pretty darn prescient.
9 people found this helpful

KortReviewed in the United States on January 22, 2020
5.0 out of 5 stars
Be Excellent!
Verified purchase
Is this a 5-star movie? No.
Is this a great movie? Probably not.

Is this a fun movie that will ignite nostalgia for the late 80s with a lot of Gen X viewers? Totally! (queue guitar riff) That's the reason I give it a biased 5 stars.

This movie has been around for ages. I liked it as kid and enjoyed rewatching it recently. The rental price on PRIME was more than fair, and the video quality good. My teen daughter was actually the one that wanted to see this, so it has cross-generational appeal. We had fun as a family re-watching it, and the streaming quality was good.

If you're a Gen-Xer in the mood for some nostalgia, and maybe want to expose your kids to movies you experience while growing up that you *think* they may enjoy, then give this a go.

Thinker3Reviewed in the United States on January 6, 2019
4.0 out of 5 stars
Great Fun
Verified purchase
Totally without pretense. A couple of apparent losers about to flunk their high school history course get a little help form the future--where they are recognized as the saviors of civilization. Nothing like a little time travel to learn about history. Why did they stop making films that are just good fun?
2 people found this helpful

TaylorReviewed in the United States on January 31, 2013
4.0 out of 5 stars
It's the movie -on Blu-Ray, nothing notable
Verified purchase
This is one of my favorite childhood movies. If you haven't seen it, you probably will not appreciate it the way people who grew up with this movie do. As such, I am not going to describe the movie - just to say it is a cherrished childhood movie, and its just as much fun now as it was back then.

The Blu-Ray seems to properly present this movie. There is nothing standoutish about the transfer. The movie looks good, but not as good as I was hoping - probably because of the film stock used. I can't fault the transfer at all, colors seem to be accurate, things are sharp where they need to be. There is a fine layer of film grain throughout the movie, so you got a nice film look. But it is not nearly as impressive as I was hoping it would be. I guess I was hoping for detail that was never there.

The same seems to be true for the audio. I was hoping for the track to just rock, with its heavy use of heavy metal music in this movie, but like other movies from the era, the music and movie seems to have been mixed seperately. You are not suddenly going to hear bass where you never heard it before, music isn't going to go into all 7 speakers. The soundtrack is faithful to the original, but there is nothing special to point out here.

There is a nice special feature - an episode of the animated show is on the disc.
2 people found this helpful

K. AmasonReviewed in the United States on December 7, 2020
4.0 out of 5 stars
I waited patiently for this to hit redbox
Verified purchase
I wanted to see this for so long and actually got the prime membership to watch the first two in the series.
I just didn't want to shell out 20 bucks to see it.
So on the day it was finally released I was first in line at the box for a buck and change.
Was somewhat entertaining, and fun...
I got my dollars worth I guess you could say. : )
Yes it's corny and predictable, but hey it's hollywood, way better than most of the garbage they put out!

Megan BReviewed in the United States on November 21, 2020
5.0 out of 5 stars
AWESOME MOVIE!
Verified purchase
Funny, classic, older movie. Sci-Fi-esque in the comedy sense. They made a remake with the same characters for good reason, available on Prime, I do believe ;), if you have a smart TV, just look up the Title and both should come up. Good day to ya all...!!! Don't get the 'Rona and, if you do, you'll be okay. 85+% recovery rate and some don't get symptoms. And, everywhere in between. Focus on the people that are lacking treatment for other conditions because of the 'Rona. Let's focus on the vets on the street, contracting much bc they gave their lives and mental stability for a country that can't house them and help them heal...HB THAT!!??!!??
See all reviews
Back to top
Get to Know Us
Make Money with Us
Amazon Payment Products
Let Us Help You
EnglishChoose a language for shopping. United StatesChoose a country/region for shopping.
© 1996-2022, Amazon.com, Inc. or its affiliates