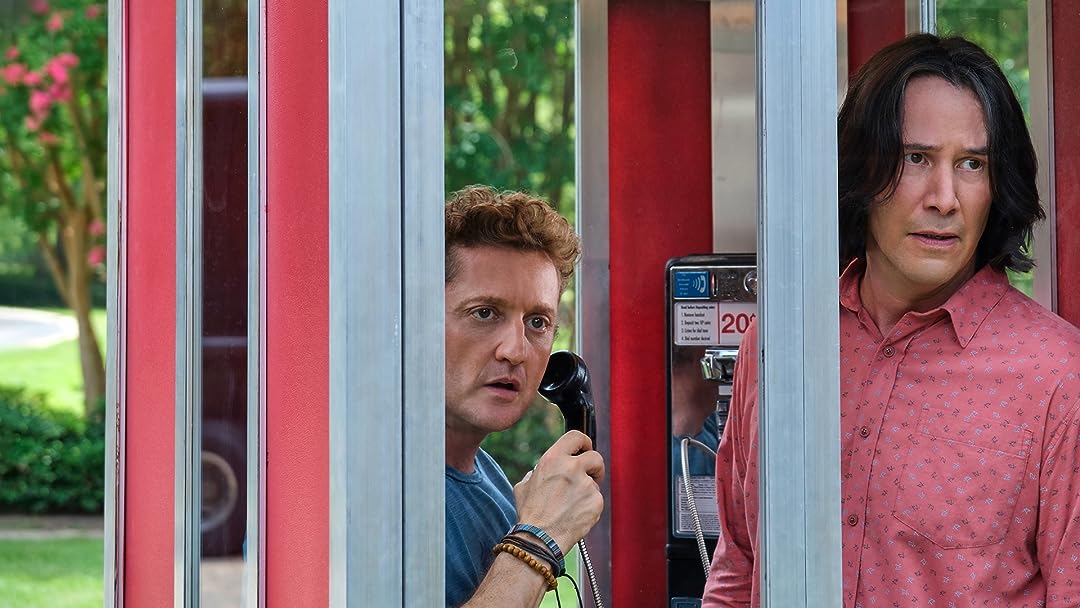 (54,200)
1 h 31 min2020X-RayUHDPG-13
Now middle-aged dads, Bill and Ted have been trying to crank out a hit song and fulfill their destiny for decades. They decide to travel into the future and steal it from their older selves.

Sam TongueReviewed in the United States on August 28, 2020
5.0 out of 5 stars
It's not the song, it's that Everybody played it.
Verified purchase
like all the bill and ted movies, it was hokey. the plot didn't make any sense, the acting was awful like always, and a million other things.
but you know what else it was?
Excellent.
I got to see Bill and Ted again, and the world wasn't scary and dark. and i know it's easy to feel that because i don't have the daily problems that others have. But they came, they were their genuine, loving, and excellent selves, and they reminded me that hope and effort can truly save the world.
That it's not the song, but that everybody played it.
Thank you Bill, and Thank you Ted. Thanks to the Princesses, and Death.
Thank you to everyone, all across space and time.
Be Excellent to Each Other.

Ty Garrelts Reviewed in the United States on August 18, 2020
5.0 out of 5 stars
Excellent
Most triumphant
222 people found this helpful

M-MReviewed in the United States on August 18, 2020
5.0 out of 5 stars
Strange Things Are Afoot At The Circle K
Missing out this movie would be most heinous. So do you're self a favor and PARTY ON DUDES!!!
214 people found this helpful

AlbertReviewed in the United States on August 28, 2020
5.0 out of 5 stars
A great and coincidentally timely sequel
Verified purchase
SPOILERS

EDIT- After rewatching the first 2 movies I appreciate this even more. The prophecy relayed by rufus never specifically said BILL AND TED would unite the world. He said Wyld Stallyns music would. And it did. They founded Wyld Stallyns - and the lineup may have changed over time but without them there's no Wyld Stallyns at all - let alone Billie and Thea who wrote the actual song while they were in the band. And like the ending said - it's not the song that mattered. It's that everyone was united (paraphrasing).

This movie had everything going against it. I expected everyone behind it to at the very least give it their best shot and for the movie to have the same heart as the previous 2. But whether it was actually going to be good or not was up in the air.

- we have been severely deprived of Alex winter over the last 25 years. Lost boys. Freaked. Bill and ted. Liquid television. He has a fantastically unique sense of humor that I've missed and we need more of. I hope to see a lot more or him in cinema.

- this was a more personal reflective story for bill and ted. It was neither an excellent adventure nor a bogus journey. It was much smaller in scope despite the stakes being somehow higher. They need to face their fears and insecurities.

- I likes the characters of the daughters but not the actresses who played then. The blonde didn't have enough to do but was better than the brunette who had a more prominent role but wasn't as good.

- the daughters time traveling seemed tacked on. As an homage to the 1st movie. The band they assembled seemed inconsequential.

- the conclusion was obvious from the first trailer and I was hoping I was wrong. But I wasn't. And the movie is pretty heavy handed about it throughout. "Preston and logan" would be the true heroes. Kind of a slap in the face to the story of the original 2 saying bill and ted were the heroes.
EDIT- After rewatching the first 2 movies I appreciate this even more. The prophecy relayed by rufus never specifically said BILL AND TED would unite the world. He said Wyld Stallyns music would. And it did. They founded Wyld Stallyns - and the lineup may have changed over time but without them there's no Wyld Stallyns at all - let alone Billie and Thea who wrote the actual song while they were in the band. And like the ending said - it's not the song that mattered. It's that everyone was united (paraphrasing).

Also, Wyld Stallions uniting the world was Rufus' theory? At the end of part 1 he plucks the princesses out from the past to bring them to Bill and Ted. Why did he do that? Did he know something? I think this was really clever writing actually. By having the daughters play such an integral role in the band it made them - and in turn the princesses - very necessary to the story. What was mostly likely just a tacked on happy ending in the first movie came full circle to add importance to the princesses, daughters, and Rufus himself. Maybe I'm wrong and there's some time travel nonsense that will prove me wrong. But if I think about it any more I'll get a headache. And I like to think that's what it was.

- Dennis caleb McCoy, while essentially playing a variation on the character of death, pretty much made the movie for me.

- I want a 4th. But i know we're probably not getting one. Where do you go? This movie needed to serve as a conclusion and to put a bow on everything. And it did. As well as it possibly could have. Limited budget. No studio wanted to make this. The creators fought tooth and nail to get it made and I admire and appreciate that. Covid. Trying to write a sequel to a beloved cult classic 25 years later. It shouldn't have succeeded but it did. Maybe it had to play it a bit safer than bogus journey. It wasn't nearly as experimental. But it was extremely satisfying. These movies never took themselves super seriously. And while they often followed their own rules more than other films (particularly time travel movies) they also broke their own rules when the story called for it and wrote themselves into a corner on occasion. And face the music had to deal with that and write themselves out of those corners. I know they wanted to do a lot more with it and it's clear a LOT was cut. But they did as good of a job with it as they could have possibly done.

- what was with the princesses traveling around doing nothing? I expected that to come into play with the story but unless I missed something it didn't. Had to have been cut unfortunately...

- old bill and ted dying in a nursing home with their wives and children not there was a BIT more depressing than I would have liked. The movie said the official timeline before the song was written was that they lived sad and miserable lives. Kind of a bummer.

- I would have loved if this movie had a bigger budget if only to add an extra half hour or so to the movie because I wanted more.

I know i nitpicked a lot. But overall they're minor things. It wasn't the big adventure I wanted but it wasn't meant to be. And bill and Ted just make you feel so good. All about unity and coming together.

Realistically this was probably a 3.5 out of 5. (EDIT: after rewatching 1 & 2 - this is probably a 4/5. Very smart writing I didn't initially pick up on) The worst of the trilogy (still a good movie just not as good as the other 2) But it gets 5 stars for overcoming everything going against it and existing at all, having the same heart, and coming at a time when it's desperately needed.
139 people found this helpful

GuyIncognitoReviewed in the United States on August 30, 2020
1.0 out of 5 stars
Pandering drivel: Bill and Ted got" Ghostbusters 2016"'d
Verified purchase
Imagine absolutely loving the original Bill and Ted movies where the entire purpose was rooting for the two underdogs that were endlessly goofy and wholesome to save the world. Now, Imagine a cynical, pandering cash grab in 2020 that tells you that these two were in fact lovers, and only their boring, painfully untalented, and ridiculous caricatures of daughters as well as completely unnecessary team of unrelated characters with absolutely nothing relevant to do or interesting to say(except for Death, funnily enough) do the job Bill and Ted aren't allowed to do because it's 2020. Now, shove Kid Cudi into the movie to barely get through "I'm actually a genius when it comes to physics isn't that funny because I'm Kid Cudi" lines with a few glimpses of the spirit of the originals in certain scenes. That should give you an idea of the nostalgia vampirism that this movie is attempting. Any time anyone other than Bill and Ted ( and in the last 20 minutes William Sadler as Death) are on the screen, it's unfunny, boring padding to frame the daughters as being able to do what Bill and Ted can't because, again, it's 2020. It's a few funny gags with over an hour of the stiff, unfunny daughters imitating an imitation of an imitation, and gathering together a group of entirely unrelated musicians that do nothing other than represent required racial demographics and try to make you think about the first movie. Problem is, it just makes you realize how great the originals are, and how that magic was used to convince you to spend $20 on nostalgia.

I've left out more details for the sake of spoilers, but do yourself a favor and don't support more destruction of things you loved. However, if you want to watch a largely unfunny, boring, tone deaf, and annoying corporate hack job that turns Bill and Ted into to incompetent losers the originals were trying to show you WASNT TRUE...then waste your $20.
153 people found this helpful

Garry J.Reviewed in the United States on August 20, 2020
5.0 out of 5 stars
You might be a king or a little street sweeper, but sooner or later you dance with the reaper.
Most Excellent! Guess how many times I watched this movie? 69, dudes!!! Be good to each other, and party on dude!
166 people found this helpful

BE EXCELLENT TO EACH OTHER & PARTY ON DUDES!
127 people found this helpful
See all reviews
Back to top
Get to Know Us
Make Money with Us
Amazon Payment Products
Let Us Help You
EnglishChoose a language for shopping. United StatesChoose a country/region for shopping.
© 1996-2022, Amazon.com, Inc. or its affiliates