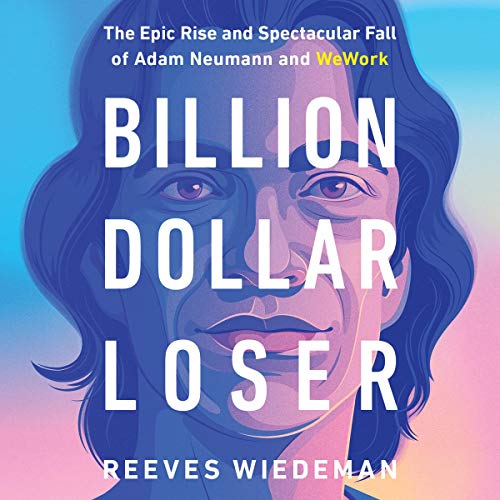 List Price: $29.65
You Save: $3.71 (13%)
By completing your purchase, you agree to Audible’s Conditions Of Use
Sold and delivered by Audible, an Amazon company
Share

4.4 out of 5 stars
4.4 out of 5
2,184 global ratings
How are ratings calculated?
To calculate the overall star rating and percentage breakdown by star, we don’t use a simple average. Instead, our system considers things like how recent a review is and if the reviewer bought the item on Amazon. It also analyzes reviews to verify trustworthiness.

John Holmes
5.0 out of 5 stars Compelling
Reviewed in the United States on October 21, 2020
Verified Purchase
Extremely well written, fast-paced narrative. Adam Neumann is far from the first person to demonstrate hubris, nor will he be the last. What strikes me is the hypocrisy between what he professed for WeWork, and how he really lived his life and values. Wiedeman brilliantly captures the essence of the man, and his narrative arc from rags to riches, and subsequent fall from grace.
Read more
16 people found this helpful
Helpful
Report abuse

Brendan L.
5.0 out of 5 stars Engrossing read (and a great break from politics and the pandemic!)
Reviewed in the United States on October 25, 2020
Verified Purchase
Wiedeman is a gifted writer, and this book is so easy and enjoyable to read. The details that Wiedeman reports are as absorbing as they are maddening, and the cumulative affect was to make me want to keep reading and reading.

TDB
4.0 out of 5 stars The Power Of Twee
Reviewed in the United States on November 8, 2020
Verified Purchase
The book starts out slow but it really picks up the pace about a quarter of the way in. I can't believe what this guy and his wife were allowed to get away with. I can't believe anyone ever took them seriously. I can't believe how much money (other people's money) they were allowed to flush down the toilet. I do totally and fully believe they got immensely rich and suckered other immensely rich people into giving them even more and more money. It's just more evidence that capitalism is a long con. As if any were needed. If the other founder had ever stood up and injected some common sense into the operation they might have had a pretty good company. But he may not have been capable of even that much. He was turned into a nonentity pretty quickly.
Read more
10 people found this helpful
Helpful
Report abuse

Dana Golden
4.0 out of 5 stars A spanning and ingenious if one sided look at spectacular character
Reviewed in the United States on December 31, 2020
Verified Purchase
This may very well go down as the definitive look at Adam Neumann. It certainly provides a great deal of insight into the man and what drove him, his wife, and his company to the brink of near failure and possible insanity. The book is well-written and never skips a beat. The research provides great detail and insight.
I do worry that the book does not consider the realities of founding a startup that may, within a longer historical context, make Adam's rise and fall a little more forgivable. Had Adam succeeded, I don't know that his vision and reality distortion field would have been seen the same way, and that is a take and context I felt was missing from the book.
Overall, an insightful take on an incredible--almost Shakespearian-- drama.
Read more
5 people found this helpful
Helpful
Report abuse

Christopher J Finlayson
4.0 out of 5 stars Huge fan of the genre, a good but not great addition
Reviewed in the United States on December 31, 2020
Verified Purchase
Billion Dollar Loser follows many of the same beats as Super Pumped. A visionary founder creates a “technology company” that disrupts a traditional industry. WeWork and Uber pursued reckless growth at all costs chasing the opportunity, pushing employees to the limits, eschewing company culture, crossing ethical lines and eventually personally falling from grace. Both founders were ousted as the companies, which had grown using seemingly endless private capital, wilted under the scrutiny of disciplined public investors. The book suffers a bit from how familiar I was with the story, but the wild anecdotes are still entertaining. I’m a sucker for a good corporate “fall from grace” story.

In startups, founders create a company from nothing by convincing employees and investors to follow a dream. The most convincing founders are likely to produce the biggest outcomes, as they will their vision into reality. This charisma, however, is the same skill that makes for a good con man. It’s hard to tell if a convincing founder is “faking it until they make it” or just “faking it”. It makes sense for venture investors to bet on charismatic founders, if the founder’s big dreams pan out, they get rich and their downside is only 1x their investment. Given the incentives, it feels inevitable that there will be more WeWork-style cult of personality companies funded, and more spectacular flameouts. For this reason, the book is a good cautionary tale.
Read more
4 people found this helpful
Helpful
Report abuse

Phil Simon
5.0 out of 5 stars Every bit as compelling as Bad Blood and Silk Road
Reviewed in the United States on November 11, 2020
Verified Purchase
A superb text. Very well written and researched, I learned quite a bit about Neumann's psychopathy, lack of ethics, and cult of personality. This book compares favorably with other recent fall-from-grace stories.

If I've got one quibble with the book, it's that I wanted to know more about what happened with some of the other players.
Read more
6 people found this helpful
Helpful
Report abuse

Chris A
3.0 out of 5 stars Full WeWork explainer but a disappointment
Reviewed in the United States on May 7, 2021
Verified Purchase
This is a book about the rise and fall of WeWork's founder. This is also a book about the birth of a company and how it became an established, global force in the co-sharing / shared office sector.

I read this on a Kindle as I commuted daily to a WeWork. I'm a big fan. After working in a 'proper' office for years, WeWork was/is a refreshing change from the drudgery of a traditional office.

Right off the bat, two things put me off about Billion Dollar Loser. The book title and the ridiculous pulled quote in the beginning.

Maybe my joyful experience at WeWork clouded my enjoyment / interest but I felt the author did everything they could to discredit the founder.

I accept there are parts of AN's life that are odd / outrageous but this guy had a vision and when all was done and dusted, WeWork survived and he walked away with nearly a billion dollars. How's that losing or being a loser?

[As usual, when companies are riding high and there are whispers of something wrong, no one does a thing in fear of upsetting the apple cart. Something that happened here.]

Saying that, it's clear a lot of research went into the book and there some fine details that keep the book trotting along. The how, why and background is all explained well.

Overall, I was disappointed about the book's negativity and inability to try to inject a more balanced view. Remember, no laws were broken.

Maybe if I wasn't experiencing WeWork first hand then my view would be different.
Read more
2 people found this helpful
Helpful
Report abuse
See all reviews

chris
3.0 out of 5 stars lacking insight
Reviewed in the United Kingdom on January 21, 2021
Verified Purchase
having read a lot of business books, i would say that billion dollar loser isn't one of the more interesting ones i have read. the story almost feels like someone who has summarized a bunch of articles on the company from the time it was founded to the time its IPO floundered. there just wasn't that much depth in character development, or an explanation of deep underlying structural trends that would have made the book more like a "big short" type of book or a "smartest guy in the room". perhaps the subject material just wasn't that great as well and the story of adam neumann was a simple "con-man" meets too much money type of story. overall felt like eating white bread than eating a thickly crusted sourdough bread.
Read more
6 people found this helpful
Report abuse

Amazon Customer
5.0 out of 5 stars Excellent Read!
Reviewed in the United Kingdom on January 6, 2021
Verified Purchase
Excellent and interesting read of the company that became (or always was) a giant pyramid scheme!

Thoroughly researched and told in captivating details and hard to put down!

It really makes you see how much Venture Capital is all smoke and mirrors and a game of pass the parcel, just not wanting to be the person that gets landed with opening it and seeing what you have really actually bought!

A real case of "The Emperor's New Clothes", except there was more than one emperor here and lots of friends and family, that weren't left holding the baby, before they were able to cash in!

The author should be commended on a great book!
Read more
One person found this helpful
Report abuse

SEA WARRIOR
4.0 out of 5 stars GRIPPING
Reviewed in the United Kingdom on April 19, 2021
Verified Purchase
I enjoyed this and the book passes my Beach Read Test. What makes for the better read: a tale of success - or a tale of failure? Probably the latter, like this one. The tale is very well told and WeWork's IPO problems are probably far enough below the radar horizon of most readers so that this book will have an appeal beyond the massed ranks of investors. Ultimately, this is a story of a man who was more style than substance. It was shocking to see just how many people were willing to throw their billions at him. After finishing this book, I was minded to buy one about Elon Musk's ascent.
P.S. My favourite book of this genre remains 'All That Glitters' by Gapper.
Read more
Report abuse

greatbrit
4.0 out of 5 stars Does success define whether an entrepreneur is visionary?
Reviewed in the United Kingdom on June 1, 2021
Verified Purchase
The retelling of the vision and collapse reminds me of the Emperor and his new clothes story - is it something no-one else can see or genuinely just nothing there. It feels maybe not as simple as that as it’s easy in the context of essentially a collapse of what was envisaged to say there was never anything there but could it have ended up differently; how many other tech companies and their founders are just able to ride circumstances better? The narrative did feel a little one-sided so although fascinating window onto the high profile story hard to draw sensible conclusions
Read more
Report abuse

Amazon Customer
4.0 out of 5 stars Greed... and FOMO
Reviewed in the United Kingdom on December 27, 2020
Verified Purchase
The book is a good piece of investigative journalism. The fall of WeWork was in part due to hedonism and disillusion of founder Adam Neumann, but as the book implies, the company excessive growth and money burning behaviour were very much encouraged by the venture capitalists, whose FOMO has led to thoughtless pouring of capital into unicorn wannabes. The writing makes it an easy and enjoyable read. Would recommend anyone who wants to learn more about start-ups and the VC funding world.
Read more
One person found this helpful
Report abuse
See all reviews
Back to top
Get to Know Us
Make Money with Us
Amazon Payment Products
Let Us Help You
EnglishChoose a language for shopping. United StatesChoose a country/region for shopping.
© 1996-2021, Amazon.com, Inc. or its affiliates