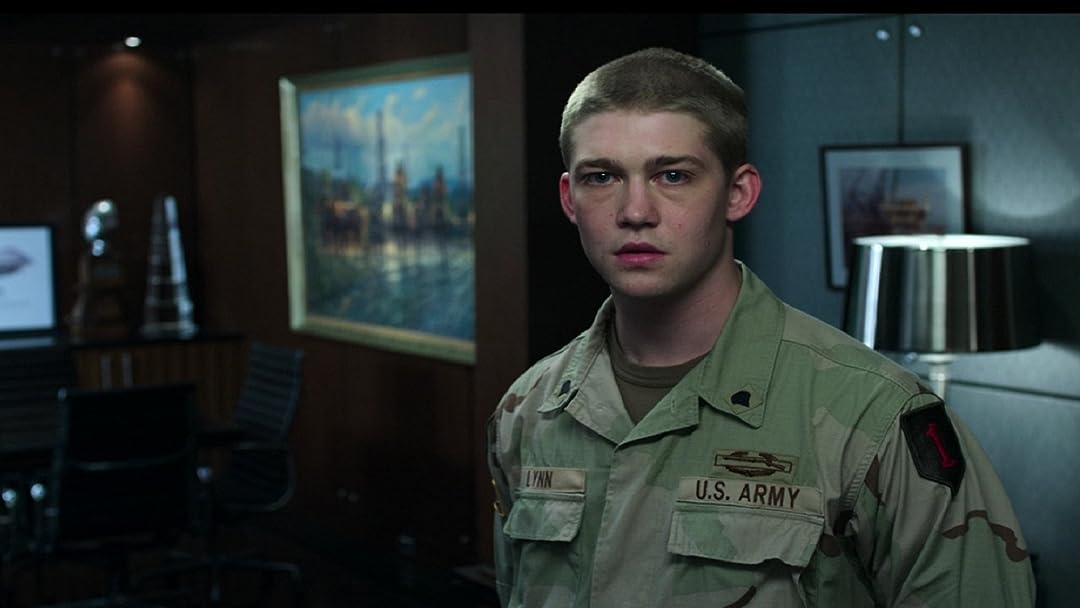 (1,003)
1 h 52 min2016HDRUHDR
Ang Lee directs the film about private Billy Lynn who is brought home for a victory tour after becoming a hero following an Iraq battle.

JNagaryaReviewed in the United States on April 12, 2021
5.0 out of 5 stars
Amazing How Dense People Can Be --
Verified purchase
Let's remember the larger factual context:

The Iraq war was based on a lie. That immediately means that the troops were exploited for others' political and financial gain. And a very small percentage of the US population were at all touched by it because there is no draft. And wasn't that "Shock and Awe" like fireworks -- like a terrific video game!?

Put aside expectations and look at what is actually happening in the film -- which is a fiction that tells the truth:

1. From the beginning, the troops are overwhelmed with fake flattery, including a limousine ride, and "promised," by a fast-talking huckster, a significantly large sum of money each.

2. Amid that a cheerleader approaches the celebrity "hero," who doesn't feel like a hero -- he was simply surviving -- as a celebrity "hero," hoping to add him as a dangle on her charm bracelet. When he, confused, refuses to play the role being imposed on him -- "hero" -- which he feels is a lie, she moves on.

3. One of the peers they meet is looking at joining the military because there are no decent jobs -- having been offered a bonus to enlist that those back from Iraq were not offered to entice their enlistments.

4. The troops are set up to "feature" during the football halftime, which is all a celebration of rah-rah "patriotic" red-white-and-blue spectacle. Who the troops really are, and what they actually went through, not only isn't understood, it is irrelevant. The concern is rah-rah "patriotism" and financial profits.

5. The owner of the football team, as it becomes obvious -- one should have seen it coming from all the disingenuous exploitation of the troops from the outset, beginning with a war based on a lie -- is about self-aggrandizement, and increasing his wealth, by putting on a fake "patriotic" show.

6. In the end, of course, the significant amount of cash offered the troops at the beginning ends up being chump change.

The movie is not about the troops; it's not even about the war, or even about how "the troops" are treated once back home. It's about a system of exploitation of the naive for the aggrandizement -- and financial enrichment -- of the exploiters, which began with no decent jobs as alternative to joining the military, and being mislead by "patriotism" and the promise of being "heroes".

It is a stunningly good film -- but no matter how obvious the scamming of the troops, from beginning to end, the dullards mistake it for a war movie about the troops, and "patriotism," and how the troops "serve and protect" the United States/freedom. The only things protected in the film are the ongoing scam, and the increasing wealth of the already wealthy, who entice with dollar signs, then after getting what they want, slam the door in the face of the "heroes," not even in the end actually coming through with the chump change.

The only people who should be "insulted" (to reference a "review" by the dumbed-down faction) by the film are those in it who used people -- "the troops" only some of them -- for political and financial gain, then discarded them.

The only criticism of the film I would suggest is that it's "message" is so obvious. The film is about, at core, unfettered greed and the false promises it makes. The conundrum is how so many are so blinded by expectation and false "patriotism" that they didn't see that which was directly and plainly in front of their faces.

As for the film being "somewhat cynical"? The exploiters are the cynics, the exploitation the cynicism; those troops who in the end see through it are not cynical, they are rightly disillusioned.

John Wayne was a draft-dodger. And he is dead. His fake "patriotic" heroics should finally be buried with him. The country needs to grow up; to stop glorifying and creating violence, the True Believers being the used, then discarded, collateral, for someone else's profit.

Edward SmithReviewed in the United States on January 17, 2019
5.0 out of 5 stars
Buy it for the Acting
Verified purchase
Billy Lynn's Long Halftime Walk is a great movie. And the 4k Ultra HD @ 60 fps version proves two things:

1) 60 fps is the gold standard for real life video. All live action (sporting events, news, Dancing With the Stars, etc) needs to be broadcast at 60 fps. The NFL/NBA/NHL/etc all look like they are in slow motion compared to this movie. Because they are. The current broadcast standard is just 30 fps.

Jfish.Reviewed in the United States on May 22, 2017
5.0 out of 5 stars
Beatifully made.
Verified purchase
I've been wanting to see this movie for awhile, it was only out for a minute locally, but since it wasn't a sequel or prequel or part seven of a movie franchise I don't suppose it had much if a built in audience so perhaps sales were slow, too bad. The previews were always gripping and left me wanting for more.
I was also anxious to see how it looked in UHD, some reviews mentioned it was quite distracting, but I didn't think so. I personally liked the detail.
So, no this is not an action filled summer blockbuster with lots of explosions unless you count fireworks at the halftime show. It does have a good story that makes you think a little deeper about what it is to send these kids off to war and what they wrestle with from their experiences. It almost requires a sequel itself though, I would really be interested to see how the guys adjust after the war and they settle into a civilian life as this movie just portrayed them receiving a brief reprieve to do promotional stuff for Uncle Sam.
The cast was good, and Vin Diesels character though short lived was interesting, would like some back story on this guy.
15 people found this helpful

Amber RichardsonReviewed in the United States on January 10, 2018
5.0 out of 5 stars
Emotional and moving
Verified purchase
I just watched this film as part of the New York Film Festival early screening and it's a film that will be stuck in my mind for awhile, it's a deeply emotional and moving film with great acting (particularly newcomer, Joe Alwyn), cinematography and an original score. The ending was strong and had me choked up, the movie is based on a satirical novel so there is definitely some humor in it so it's not a totally depressing film but definitely a thought-provoking one, this was the film I was anticipating the most out of the 2016 releases then upon reading some underwhelming reviews from the opening night my expectations went down a little but I think it will be go down as one of the best films of the year, it's images and its anti-war message in my opinion were powerful and the film should inspire a lot conversation about what it means to "support the troops" and how we can help those returning who are suffering from PTSD, overall I give it 8 out of 10 stars, I hope people go out and see this in the theater and talk about it afterwards.
11 people found this helpful

Leon P.Reviewed in the United States on September 4, 2017
4.0 out of 5 stars
A Good Solid Movie
Verified purchase
Somehow, I suspect this movie would have been better received using more standard film techniques. I've seen it in 4k and on dvd and I'd have to say that the 4k was a bit distracting. Having said that, I think a lot of negative reviews focus on the film technique being used and not on the story that's being told. There is a story here and it's an important one. This is not a feel good, Ra-Ra movie where we stand up and cheer at the very end.

It's a movie that asks several important questions with no easy answers. What really makes a hero? Billy Lynn wasn't trying to be heroic. He didn't asked to be videoed. He didn't ask to be an internet sensation and he certainly didn't ask to be a hero to a nation in desperate need to feel good about something. Now he's sent home and the Army put him and the others of Bravo squad on tour in the U.S.

Everyone treats him like he's a celebrity and expect he should now act the part. Strangers behave as though he should be alright with a now lack of privacy. The Army, exploiting his new found fame, parades them around the country further spreading their celebrity status. The men of Bravo haven't got much of a choice in the matter. It's either play the hero and go along or face disciplinary action and "Let down a Nation." After all, this is now America's story. Think -- The Jessica Lynch story.

The men play along, all the while some of the men battle with PTSD from their experiences in Iraq. They're not being treated, in fact, they're not even being diagnosed and they have to play the Hero role and not by their own choosing.

There is a hero in this movie and it's played by Vin Diesel's character. He dies early on but we get to know him through flashback sequences and he's the hero we should celebrate. Overall, a good solid movie with heart and daring. They dare to ask good questions. This movie is not unlike Flags of our Fathers by Clint Eastwood and somewhere bordering on the Jessica Lynch Story.
8 people found this helpful

JacobReviewed in the United States on December 9, 2017
4.0 out of 5 stars
Amazing quality 4K
Verified purchase
The picture quality is literally the best I’ve ever seen in my life. Shot at 120 FPS and played at 60, it actually feels like you’re just looking out a window sometimes. The film itself isn’t that great, but it’s nice to have to show off my TV. Garret Hedlund stands out the most, Steve Martin feels wasted, as does Chris Tucker who we don’t get to see nearly as often as we wish. As with Life of Pi, it delves into spirituality and religion, although briefly, but it seems to have a big impact on the story. Very strange Destinys Child “cameos” that felt cheap and very tacky and lasted way longer than I would have liked.
8 people found this helpful

D. RobinsonReviewed in the United States on April 13, 2018
5.0 out of 5 stars
Realistic
Verified purchase
From an OIF Veteran/military psych...one of the most realistic portrayals of PTSD I've seen. Nothing preachy. No agendas. Utterly riveting. Perfectly paced.
13 people found this helpful
See all reviews
Back to top
Get to Know Us
Make Money with Us
Amazon Payment Products
Let Us Help You
EnglishChoose a language for shopping. United StatesChoose a country/region for shopping.
© 1996-2022, Amazon.com, Inc. or its affiliates