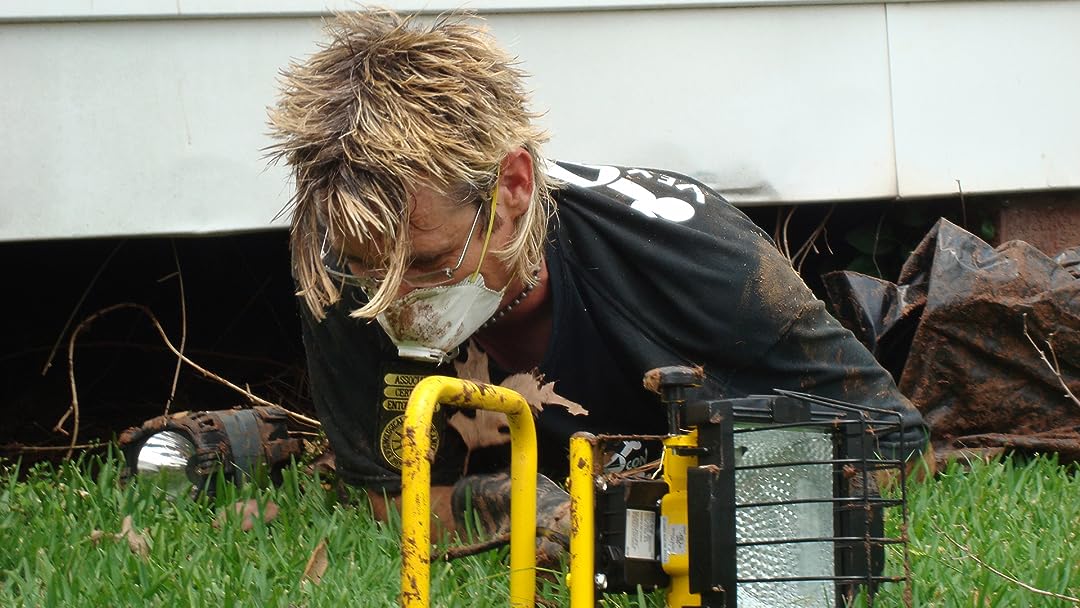 (28)
2009TV-PG
Join us as we follow Billy Bretherton and his pest-removing family as they're called to take care of Louisiana's most extreme extermination cases with a perfect blend of drama and humor. A former U.S. Air Force Sergeant and 15-year pest management industry veteran, Billy tackles 8-foot alligators, baby raccoons, bats and bobcats. He releases as many as possible back into the wild.

SuperDogReviewed in the United States on April 12, 2019
5.0 out of 5 stars
I love this show.
I don't watch regular TV. I only watch stuff online. I never knew this show was on TV but I'm glad I came across it on Prime. It's got some humor and family drama. This guy seems like he's a hill billy but he knows his stuff. I like the real info he gives on re homing pests and animals and also the education on entomology. He
s a pretty smart dude.
10 people found this helpful

Aslat8Reviewed in the United States on May 12, 2020
5.0 out of 5 stars
I love this show!! And Billy, you do a huge amount of good despite what you said end of 2:21.
You only said something similar to you do very little work or good in the world except for this little bit of 'rescue' work which started out as exterminator. You have tons of seasons with tons of episodes with tons of rescues each show or several anyways. You do so very much good especially by educating the public the way you do. It's got to be one of the biggest services any one can offer; educating the public all about wildlife. And how the animals are having their homes infringed upon so we a lot more of them which is very dangerous for them and especially their young.

I love all the heaps of info you give about the animals, safety, the Vex Con safe products etc. My point is, please do not belittle yourself or your efforts because you are just as much a hero as the Irwin Dad that passed. His family picked up the torch and is running with it now because he was so passionate about the wildlife. And I love your family as well. I know your family has all the same struggles as any but they appear very loving, compassionate, forgiving and thoughtful; all of you. I would love, many would love to be part of your family and/ or your rescue work (exterminator work).

I think you may be right about needing a new mascot though also mentioned in the latter part of season 2. Maybe you could add some happy wildlife and vines wrapped around and playing on the crossbones representing the saving of animals amidst the extermination of some like the gators over 6" (feet " or ' ?? cant remember ever, lol) or cock roaches which makes breathing more difficult. I wish I had known that while my son was still young. I would have been more careful about where I let him play because he did have asthma.

Anyways, I'm on season 3 now. I''ll check back in soon. Best of wishes to you and your family!!

I gotta also say, that though I am currently married and mostly happy, I LOVE these guys; Billy and his brother Ricky. Any women having trouble with one of these two men probably needs to look in the mirror and see where they are messing up themselves because these are 2 good men, raised right. You can tell a good man by how they treat their mama. These two get frustrated with their mama but they never stop respecting her despite any family disagreements. That means you can work things out with these two. It's what they expect, to work things out at least eventually. Now, having said that, I will admit I do not know the rest of the story; only that Billy and Mary divorced and the show ended and Billy moved. If I'm ever in the market again, I just might look up Billy. I love Ricky too but I am an older sister, just a few years younger than Billy and maybe the same age as Ricky.

You go you strong, sexy, smart, funny and compassionate 'mens'!!! I really hope you find a new show to make. I may have one. I have a recycling business myself for PCs and Electronics. Or should say my husband and I do. We are going to go online as well for what we do and soon. I am the appt lady in my business.
3 people found this helpful

MissChelleReviewed in the United States on April 9, 2019
5.0 out of 5 stars
Aaaaaaaah! Snake!
I miss this guy and his family being on the air. His policy on not killing animals and rehoming them instead is admirable. He's a hoot and a half on top of that. Wild hair, wicked style, and the best turns of phrase in the bayou.
14 people found this helpful

Highwinder's ReviewReviewed in the United States on February 15, 2020
2.0 out of 5 stars
I haven't seen this level of stupidity since the Vern Fonk insurance ads of the 1990s.
Watched a few of these episodes online. My wife and I could not believe the stupidity. It's a train wreck that never ends. What is this supposed to be, Bret Michaels and Vince Neal attempting a reality show? Even worse, they're "minds are blown" by pretty much everything they witness, no matter how mundane or utterly boring ("Dude, like, it totally moved!"). This show makes the late Steve Irwin's show look like a cool, demure, professional rocket scientist series which would qualify its viewers with honorary Ph.Ds.

2 stars for being good for a laugh if you've run out of drugs.
4 people found this helpful

katieReviewed in the United States on May 23, 2020
3.0 out of 5 stars
should NOT kill the honey bees!!!
I mostly like the show. I was horrified to see that he killed the honey bees. More concern is expressed for killing a useless alligator and other critters. Honeybees are so endangered, yet so absolutely necessary for all of us to be fed. He calls a wildlife guy for gators, etc. Why the heck didn't he call a qualified honeybee guy to gather and save the bees? They are worth saving a hell of a lot more than anything else.
I do hope that by now someone has educated him. Every bee he kills (excluding african bees) hurts all of us.
3 people found this helpful

Frank MedinaReviewed in the United States on March 15, 2019
5.0 out of 5 stars
Best show ever
Perfect mix between family drama and love for animals, reality show at its best.
8 people found this helpful

MarieReviewed in the United States on December 18, 2020
5.0 out of 5 stars
Charming, Quirky Characters From Louisiana
I love this series. It is completely absorbing with an unending variety of people and problems being solved by Billy and Ricky and sometimes Big Bill.

Billy and Ricky dress in what I call Pirate Chic and are always impeccably clean, kind, and courteous to every person no matter how rich or poor or how distressfully impoverished or pompously wealthy the surroundings.

This is very educational about all kinds of animals, their dangers and value to the environment and ways and means of peacefully capturing and relocating troublesome pesky creatures to better locations. Highly recommended.

Matt JacksReviewed in the United States on September 14, 2019
5.0 out of 5 stars
LOVING RED NECK LA TERMINATOR !
Billy , looking like a roadie for 80's Metallica is THE sweetest animal loving guy.. in one episode he found a rat drowning in some fry oil.. but since he was on a cockroach mission HE LET go because he loves animals so much.. AS FOR WASPs and bugs >> no.

NO this isn't BB or GOT, didn't cost 10 million an episode, it's just fun REALITY TV, just relax and unwind before you go to sleep or something.

LOVE you MARY :) :) hey I'm not startin nuffin!
3 people found this helpful
See all reviews
Back to top
Get to Know Us
Make Money with Us
Amazon Payment Products
Let Us Help You
EnglishChoose a language for shopping. United StatesChoose a country/region for shopping.
© 1996-2022, Amazon.com, Inc. or its affiliates