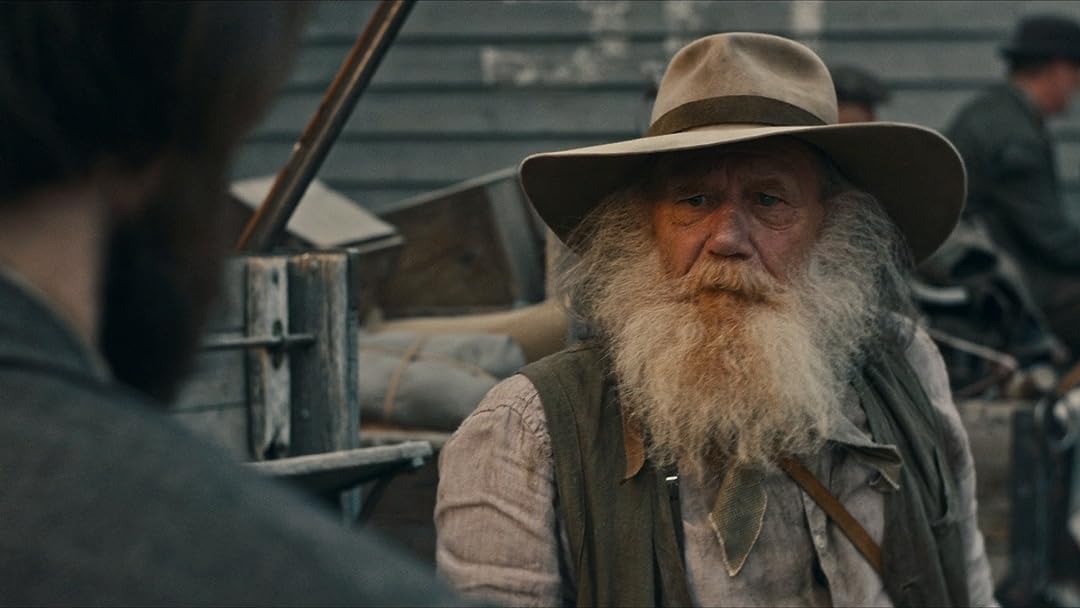 Season 1
(100)
7.02022X-RayTV-MA
Billy the Kid is an epic romantic adventure based on the life of the famous American outlaw.

TrollenthalReviewed in the United States on April 26, 2022
5.0 out of 5 stars
Comes to life! Update!
The story of Billy the Kid has been a fascination of mine for over 60 years. Ironically so in that I had no idea I would one day live and retire in his home town of Silver City. Billy was a quintessential example of ambiguous and anomalous savant character, entirely the product of his environmental roots starting from Irish traditions and immigration pressures of survival, to landing within the Range Wars of the American Southwest. Multi-lingual, educated, liberally spirited, yet socially aloof, his search for appropriate behavior and fair justice at a time when the Old West was perhaps at its most treacherous peak, is perhaps still not fully discoverable today within the blood soaked soils of Eastern Arizona and Western New Mexico. As I live here, and have even knelt with repose in the very cabin that was once his and his mother's, I still sense the wildness of this region, product of the conflicts between the Apaches and the Land Grant Spaniards, the Mexicans, and the encroaching Whites along with the collision of the old ways and the newly blazoned Federalism of the US Government attempting to salve the treachery of the Range Wars in general. This series, for the first time amongst many movies, ballet and documentaries, seems to be bringing all these elements gradually to life before our eyes, making the legends of Kid Antrim, William McCarty, William Bonney, or Billy the Kid bear some historical truth and proffer contemplative reflection for our time about who we are and how we got here as so called modern Americans. Fascinating to watch, especially from Silver City, New Mexico.
Update: Let me be clear, as in all dramatic series based on true incidents or people of history, there are a few things in this long arching story which are not cut out for us with the precision of an exacto knife. This is not to say that the events we witness, or the general social atmosphere of the area and time are incorrectly portrayed! Unlike some haters who have posted here (who never bothered to read research facts, Wikipedia anyone?), I am happy to allow for the artistic license clearly adopted by these producers and writers, simply because this series STILL brings the envelope of the existence of "The Kid" in this region to life! The character of Billy the Kid's persona is what's most important here, and I truly believe from all I have read and experienced here in the Southwest, this series has gotten it right dealing with his conflicted pathos. Many of the most important known events are depicted, some with small shifts here and there. Seven episodes now consumed and the production is consistent, classy, and quite artistic in all areas of the show's production. So let's worry less about whether So-in-so said or did exactly such-n-such to Whomever, and sit back and enjoy a truly well produced series with its engaging storytelling, great acting (Tom Blyth!!!), fine direction, and the gift of actually paralleling history with enough accuracy to engulf our senses with very much what it was like for the child, Henry McCarty, to then transform into perhaps the most notorious yet celebrated outlaw of the Old West, Billy the Kid! P.S. This production has it right, he was NOT left handed as recently discovered by photographic forensics of the surviving tin-type!! Negatives struck from it were reversed; note the tongue direction in his belt, buttons on the wrong side of his vest, amongst many other clues.
32 people found this helpful

Diane SmithReviewed in the United States on April 24, 2022
4.0 out of 5 stars
First 2 episodes are excellent.
Billy The Kid. Great show really loved first 2 episodes. Unfortunately I was already coned into a EPIX subscription because I wanted to watch a show they kept showing in there movies category but they never had it. Seems they are just another big believer in big business religion, where they worship lie's and deceit to gain money. Maybe some day i will get the chance to watch this great show by another means. Just tired of the constant cons. Unescapable.
19 people found this helpful

johnReviewed in the United States on May 13, 2022
5.0 out of 5 stars
Amazing show
Ignore the idiot troll giving it one star. This isn't the history Channel. Much of Billy's life, and death for that matter, is speculation and I think they did a great job building his early years to give some buildup to the man he became. Rather than just jump into his life on the run. Great storytelling and visuals are making this the most enjoyable retelling of what life as Billy the kid may have been like.
14 people found this helpful

Robert EdgarReviewed in the United States on April 30, 2022
5.0 out of 5 stars
Brillant adaptation of the Legond of Billy the Kid
You don't need to be a fan of the great wild west to understand or appreciate the story of a young man trying to survive in a hostile world. Tom Blyth brings the charter of Billy to life and owns it. Worth the watch.
11 people found this helpful

Glama PussReviewed in the United States on May 6, 2022
1.0 out of 5 stars
If I cld give this negative stars I wld bc...
the facts are wrong from the jump. Billy was not born in NYC, nor Missouri, Indiana, or Ohio. Frederick Nolan who wrote the best book on him I've read which is sold here did intense research for his book 'The West of Billy the Kid' and found no census records anywhere of him, looked in all the states he lived in as a young boy. Now he is tracking down leads that Henry, later Billy, may have been born in Utica NY. His father did not die as described here. His mother's name was Katherine not Kathleen. William Antrim was likely a dirty blonde person but no, the series goes with the old flawed tintype photo showing him as a brunette. Maybe the series has great acting, I dunno, but why continue watching when it is based on FICTION not fact? Do NOT recommend.
7 people found this helpful

The Nameless OneReviewed in the United States on April 30, 2022
5.0 out of 5 stars
A western period drama that draws you in and doesn't let you go.
I've watched the first three episodes of Billy the Kid and I am hooked! I am looking forward to more episodes being released. This is a really well done western period drama that gradually envelops you into the fascinating world of Billy the Kid and competently sets the tone for the American Old West. Every performance is solid and I want to specifically note that I think Tom Blyth's performance as Billy the Kid is excellent!
8 people found this helpful

Patricia CaldwellReviewed in the United States on May 26, 2022
5.0 out of 5 stars
Bill The Kid I would recommend this series
As a former school teacher who has worked with children who have come from challenging circumstances in the family growing up I gave this series 5 stars. I worked with children like Billy who had a family with faith in God and moral convictions but also had deaths and had what some would call bad luck or poor decisions. The problem being in many instances these children are easy prey fo people showing easy money. Because society will not hire them they because do not look or act or dress like all the others. They have talents that can be used in legal constructive ways or just as easily be used for criminal devious acts. A series like this can show you as an adult what can happen to trap a young person, leading down the road to criminal activity. A young person can fall into some serious problems lured by money or the promise of fame. I am not sure this depicts the true story of Billy the Kid but I can see this happening. He used a gun where kids now can use their minds and talents in other ways lured by money just as Billy. And yes some use guns or other volient means just like Billy.. I am not saying all people will take the wrong road in life that come from a challenging childhood but look at the person not just the outer appearance when helping a young person. You might be a neighbor or a teacher or a local merchant be aware they are our future and we all are responsible for the society we build. I am anxious to see the rest of the series.
4 people found this helpful

Queen of SSReviewed in the United States on April 26, 2022
5.0 out of 5 stars
GREAT SHOW
great acting, photography, 3-dimensional characters. a lot of serious talent from top to bottom . cannot wait for episode 4.
8 people found this helpful
See all reviews
Back to top
Get to Know Us
Make Money with Us
Amazon Payment Products
Let Us Help You
EnglishChoose a language for shopping. United StatesChoose a country/region for shopping.
© 1996-2022, Amazon.com, Inc. or its affiliates