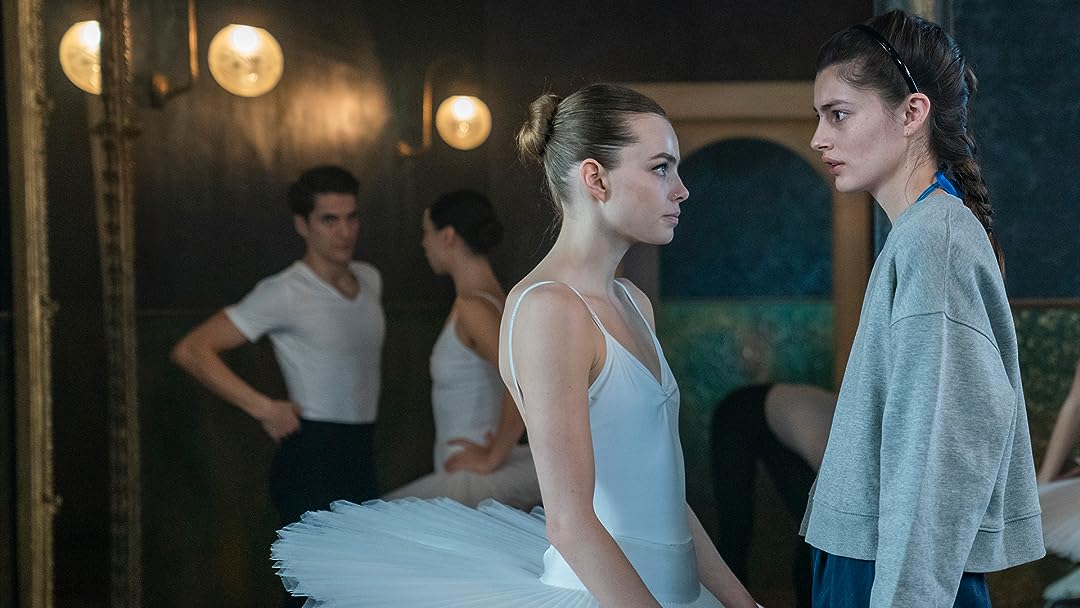 (273)
5.91 h 53 min2021X-RayHDRUHD16+
Kate is an aspiring ballerina who is given a scholarship to attend a prestigious ballet school in Paris. Upon arrival her confidence is tested by a fellow dancer, Marine who recently lost her brother. While confrontational at first, their relationship evolves into an emotionally charged, competitive union beset by lies and sexual awakening as they risk it all to join the Opéra national de Paris.

neaReviewed in the United States on September 24, 2021
1.0 out of 5 stars
Another Amazon Original that sucks
Verified purchase
I am not one bit enjoying The Amazon originals, I don't think that trips into drugs and girls acting like disgusting spoiled brats, high on drugs is not my idea of a good movie. What does it take to write this kind of nonsensical drivel? So far nothing I have seen makes me want to watch a minute more of this idiocy. Thought it would be about ballet, I have figured out that very little will be about ballet, more is going to be about crazy.
122 people found this helpful

BabsReviewed in the United States on September 24, 2021
1.0 out of 5 stars
RIDICULOUS!
Verified purchase
I like ballet and have watched several documentaries/movies about ballet, but this was stupid! Lost interest immediately when it got silly with the swallowing of the worm and it becoming an unrealistic, dumb sci-fi! Stopped watching in that second. Too much teenage nonsense for my liking.
72 people found this helpful

Amazon CustomerReviewed in the United States on September 24, 2021
1.0 out of 5 stars
AMAZON NEEDS BETTER MATERIAL
Verified purchase
AMAZON ORIGINALS ARE GETTING MORE RIDICULOUS, FOUL AND SLOPPY.

I AM TIRED OF WATCHING F MOVIES. WHAT A WASTE OF TIME AND MONEY.

L. ParkerReviewed in the United States on September 26, 2021
1.0 out of 5 stars
So Disappointing
Verified purchase
I should start this review by saying that I was a ballet dancer so my viewpoint is different from the typical viewer. This movie is formulaic - containing the typical mean ballet teacher, ballet students with a multitude of issues, overly- dramatic and just so disappointing. The caricatures of dancers are just that - caricatures. The main message I derived from this movie is "Never become a ballet dancer unless you are a masochist." Yes, there are good people and not-so-good people in the ballet world - just in every profession. But there is also so much good - beauty, talent, kind and excellent teachers, camaraderie and happiness. I experienced it all... and I never experienced anything but kindness and support from my colleagues and teachers. It is very hard work but also so rewarding. The good is possible in this profession... and you don't have to become the best ballet dancer in the world to enjoy the benefits of this beautiful art form.
46 people found this helpful

linda galellaReviewed in the United States on September 24, 2021
4.0 out of 5 stars
“Blessed is she who falls. Blessed is she who rises again”
Verified purchase
Wow. This is an intense movie. From documentaries I’ve seen on dance, it looks very true to the incredible
pain, rigor and emotionally demanding world of professional ballet. The social and political aspects appear to worse than the physicality, which is plenty overwhelming.

Two young dancers end up as roommates. One is the recipient of a scholarship. The other is the sister of the deceased dancer for whom the scholarship was created. Her parents: Mom’s the American Ambassador to France and Dad’s a nut milk mogul. Her roommate’s father? He pours concrete in a small town in Virginia.

They have a difficult relationship with each other and the director of the ballet school, played brilliantly by Jacqueline Bisset. They’re not the only students with issues but it’s not overly dramatic. The emotional turmoil, angst and struggling rings true in this film.

Lots of dancing to enjoy along with some unusual photography and a broad range of music. Altho’ the setting for the story is Paris, you won’t be getting a tour of the city. Dance floors, stages, wealthy patrons, a strange club and the school are the bulk of the locations.

Character development is fair for an almost 2 hour movie. Unless you know French, the closed captioning will help with translating all the French conversations. Some can be intuited but there’s a lot that’s fast moving and too important to the storyline to miss.

It’s too bad there are sexual situations that are a bit too much for 12-14 year olds because this could be a good film for those considering a professional career in dance. Amazon has it rated 16+ but even at that, the 16’s should be mature. The relationships get manipulative and adult, drugs are involved and there’s some really horrendous adults.

For grownups, this is a good choice if you enjoy films with an artistic flare, good storyline and something different from the usual fluff or filth🍿
32 people found this helpful

Beth H MalbonReviewed in the United States on September 25, 2021
2.0 out of 5 stars
Weird Movie
Verified purchase
I love dance movies, and I love ballet. BUT this movie is awful! I did watch all of it so 2 stars instead of one. But I would not recommend this to anyone, nor would I even say I watched it. It’s that BAD!

indigoReviewed in the United States on September 24, 2021
4.0 out of 5 stars
Sucker for Ballet
Verified purchase
It's a dark sad story really. The dancing is lovely, and who doesn't love Jacqueline Bisset. The story is a bit meandering. Honestly, if you are not a sucker for the ballet, there really isn't anything here for you. If you are, it will leave you wanting... better than nothing, better than some..
21 people found this helpful

Robbin YarbroughReviewed in the United States on September 24, 2021
5.0 out of 5 stars
Intriguing Movie
Verified purchase
I once heard from a young woman who was part of a ballet dance company that it could be an ominous world where it took more than talent to become a prima ballerina. This movie proves that point. A must see for anyone who would like a peek into that world.
18 people found this helpful
See all reviews
Back to top
Get to Know Us
Make Money with Us
Amazon Payment Products
Let Us Help You
EnglishChoose a language for shopping. United StatesChoose a country/region for shopping.
© 1996-2022, Amazon.com, Inc. or its affiliates