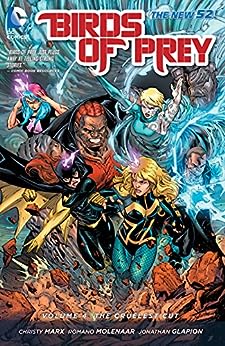 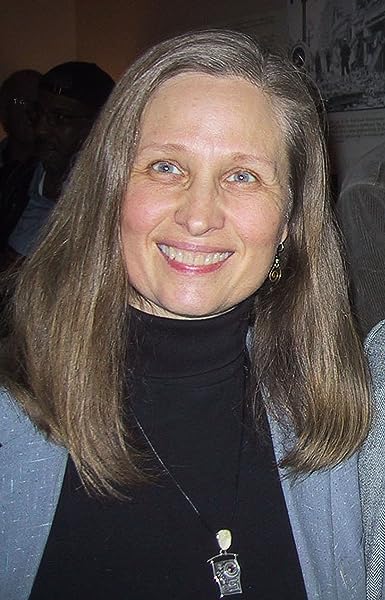 by Christy Marx (Author), Romano Molenaar (Illustrator, Artist), Vicente Cifuentes (Illustrator, Cover Art) & 0 more Format: Kindle Edition
Book 4 of 5: Birds of Prey (2011-2014)
See all formats and editions
Sorry, there was a problem loading this page. Try again.
The traitor within the Birds of Prey finally shows her face, as the team struggles to recollect itself in the wake of such a deadly, costly betrayal. They'l have no room to breathe, as two terrifying organizations--Basilisk and the Court of Owls--come back from team members' pasts to haunt the Birds. Writer Christy Marx (SWORD OF SORCERY) jumps onto one of DC's most unpredictable titles in BIRDS OF PREY VOL. 4. Collects issues #18-24 and 26 and TALON #9.
Read more
Previous page
Next page
Kindle e-Readers
Fire Tablets
Fire Phones
Free Kindle Reading Apps
Available on these devices 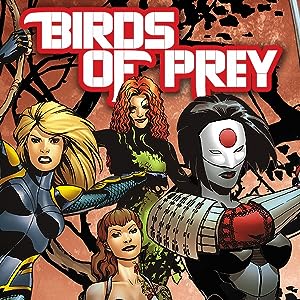 Christy Marx is an American writer and a photographer. She is the creator of the popular animated television series Jem and the Holograms and has written scripts for various episodes of animated television including Teenage Mutant Ninja Turtles, Conan the Adventurer, G.I. Joe, Hypernauts, Captain Power and others. She is known for her original comic book series Sisterhood of Steel as well as work on Conan, Red Sonja, and Elfquest. She is currently the writer of BIRDS OF PREY. --This text refers to an out of print or unavailable edition of this title.

Christy Marx has had an eclectic career as a transmedia writer, TV and animation series developer, game designer and narrative designer. Over the years, she has worked on live-action television, film, animation, videogames, comic books, graphic novels, manga, and non-fiction educational books.

She began her game design career creating award-winning adventure games for Sierra On-Line, and went on to work on console, MMO, Facebook, and mobile games.

Christy was awarded the Writers Guild of America/Animation Writers Caucus Award for contributions to the field of animation writing. Her TV credits include: Babylon 5, Twilight Zone, Spider-Man, G.I. Joe, Jem and the Holograms, ReBoot, Conan, Beast Wars, and Teenage Mutant Ninja Turtles. With her partner, Randy Littlejohn, she has written for X-Men: Evolution, Stargate Infinity, He-Man and others.

She began writing comics with Conan and Red Sonja stories for Marvel. Her credits include Wolfrider, a graphic novel with Wendy Pini in the Elfquest series, and various other stories. She’s written for DC Comics on fantasy series Amethyst, superhero series Birds of Prey, and Green Arrow. Her original Marvel/Epic series The Sisterhood of Steel, about a society of warrior-women is available from the author.

After six years providing Narrative Design at Zynga, she has returned to the freelance life to pursue her own projects, including a second edition of her book, Writing for Animation, Comics and Games, and a memoir about creating the animation series for Jem and the Holograms.

She lives on top of a huge ridge of volcanic stuff amidst towering pines, oaks, and cedars with her husband, Randy Littlejohn, and four…no, make that five…no, make that six cats. They’re stopping at six. Really. They are.

4.7 out of 5 stars
4.7 out of 5
28 global ratings
How are ratings calculated?
To calculate the overall star rating and percentage breakdown by star, we don’t use a simple average. Instead, our system considers things like how recent a review is and if the reviewer bought the item on Amazon. It also analyzes reviews to verify trustworthiness.
Top reviews

Dylan McGregor
5.0 out of 5 stars Solid book, keeps getting better
Reviewed in the United States on December 11, 2014
Verified Purchase
This book keeps getting better and is one of the easiest to tie in to everything going on in the "street level" of the DC universe, which is much more interesting than the rather wooden Justice League and its trio of wooden reboots. I missed not having Bat-girl for a bit of it as she's my favorite part of the book but Canary is quite interesting and I love Styx and the constant Court of Owls problems. I was leery of Condor at first but he has turned into a solid character and I like having a male character in the team. Good stuff.

The betrayal in this pissed me off to no end... I'm hoping a certain someone's head ends up on a pike!
Read more
One person found this helpful
Helpful
Report abuse

Robert Bridge
4.0 out of 5 stars It's good
Reviewed in the United States on January 13, 2016
Verified Purchase
This was good, and they finally start getting into Black Canary's past.
Read more
Helpful
Report abuse

storm
5.0 out of 5 stars Very, very good!
Reviewed in the United States on September 24, 2014
Verified Purchase
I honestly can not remember when I read better comic! The story is very light, but interesting and keeps you reading and wanting more. The artwork and colors are the best so far of this series. This is the best volume. You will not regret if you get it. Really loved it!
Read more
3 people found this helpful
Helpful
Report abuse

Christy blue
5.0 out of 5 stars Great
Reviewed in the United Kingdom on June 6, 2016
Verified Purchase
As described in the advert and arrived in good time.
Read more
Report abuse

Amazon Customer
4.0 out of 5 stars Book & Seller Review
Reviewed in India on October 7, 2017
Verified Purchase
If you're planning to buy a book ( not just this one) , prefer to buy from uread shop as opposed to amazing buy , i had ordered this one from AB and replaced it due to the condition but the replaced one was even worse in condition . I returned it then bought from URS . The Book arrived in it's original shrink wrap (new , pristine). So prefer Uread shop over amazing buy .

Coming to the book , if you're interested on an insight into DC's female heroes , this series might be a good start. Pacing is fine , art is exceptional and the story is worth a read .
Read more
Report abuse