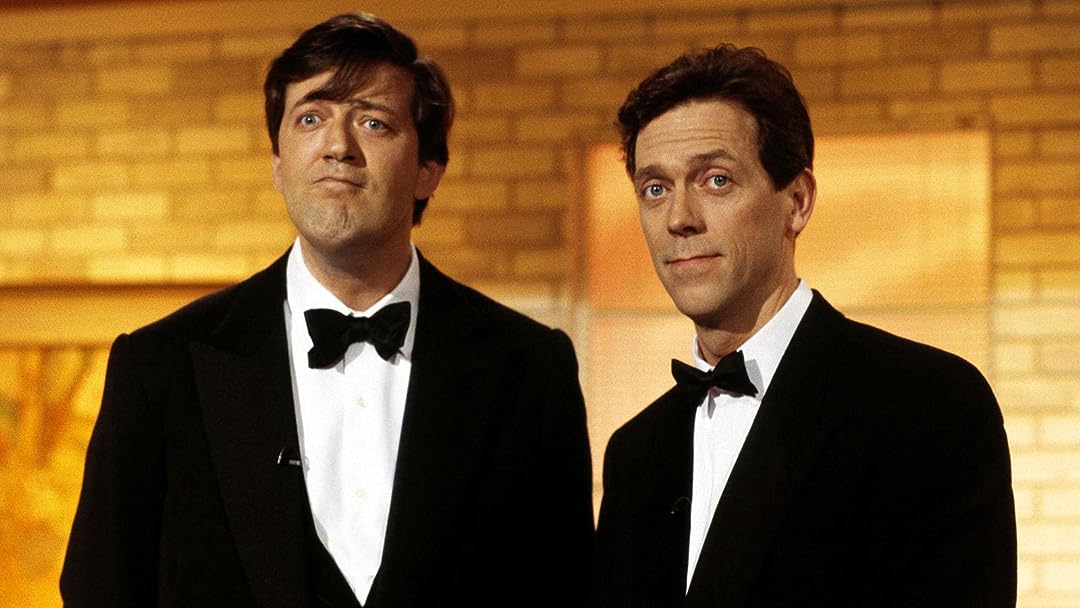 A Bit of Fry and Laurie

(59)
8.31992TV-PG
They're back: Hugh Laurie (House) and Stephen Fry (Wilde, V for Vendetta) star in the third season of the brilliant sketch comedy series, A Bit of Fry And Laurie. At times eccentric, frantic and always unpredictable, Fry and Laurie are a comedic tour-de-force who push the envelope with their brand of smart, irrelevant humor, memorable characters and even their fantastic musical numbers.

Watch with BritBox
Start your subscription
Add to
Watchlist
Redeem a gift card or promotion code
By ordering or viewing, you agree to our Terms. Sold by Amazon.com Services LLC.
Write review

VivaReviewed in the United States on July 30, 2007
5.0 out of 5 stars
as funny as season 2 and most of season 1
Verified purchase
These guys don't disappoint, even the third time around. The only thing funnier than Hugh Laurie in drag is Fry attempting an American accent. The usual wordplay, absurdist hijinks, and oddball sketches abound, with just one of the highlights being the "kickin' a**" song--hilarious!
These sketches differ from those in seasons 1 and 2 only in that the opening promo is different and the ending features Fry inventing a bizarre cocktail while Laurie plays piano and makes a horn sound with his mouth.
If you love these two, rent Black Adder and the whole Jeeves and Wooster series as well. It would be heavenly if Fry could just guest star on House.....

bonsaiparkReviewed in the United States on June 30, 2018
1.0 out of 5 stars
Three bad copies locked up DVD player
Verified purchase
I'm not going to review the contents of this DVD, other than to note that its funny, intelligent humor is what one would expect from the brilliant duo of Stephen Fry and Hugh Laurie. My one-star rating is to knock the poor manufacturing of the disc. Like another reviewer, I've had three copies lock up at different locations in episode four. Each disc was tested in three players - two standalone Sony models and my PC's DVD drive - and all failed consistently. They didn't just throw up an error code, but totally froze the player.

Three is my limit, so I'm giving up on the disc (but hoping that a clearly identifiable "new" edition will be produced before too long). Unfortunately this is happening way to often the last couple of years.

Griffin2020Reviewed in the United States on June 28, 2013
4.0 out of 5 stars
Great set
Verified purchase
Hilarious show, classic sketch comedy.
Very few do it like Stephen and Hugh.
Before he was House, Hugh was a comic genius.

NCScoundrelReviewed in the United States on October 29, 2009
5.0 out of 5 stars
Another DVD Gem
Verified purchase
If you have seen other Fry & Laurie bits and like them, you'll also love this. These two are consistent in their ability to be funny. If you have never seen them and are curious, it is very British humor at its best. Hugh Laurie is nothing like Dr House in these DVDs! They are hilarious.

A.K. RoarkReviewed in the United States on August 28, 2007
5.0 out of 5 stars
Soupy Twist
Verified purchase
When I purchased A Bit of Fry and Laurie Season 3 (and 4) I was incredibly happy. I had waited for ages for it to come to the states, and when it finally did, I ordered it quickly, and it came within the given dates of delivery. What can I say about A Bit of Fry and Laurie except soupy twist!

WyrmwoodReviewed in the United States on August 11, 2017
5.0 out of 5 stars
A Bit of Fry & Laurie - Season Three
Verified purchase
What can I say that hasn't already been said. If you like British comedy, then these DVDs are a must.

Brendan RReviewed in the United States on March 21, 2021
1.0 out of 5 stars
Find something else.
Verified purchase
Both of these came damaged and sadly I missed the return window on the second (replacement) one. Especially don't try to give them as a gift. It will be embarrassing

Amazon CustomerReviewed in the United States on July 1, 2020
1.0 out of 5 stars
Region 2 does not work in the US
Verified purchase
I was sold a Region 2 DVD which does not work in the US which is a Region 1 country. Region 1 countries do not have the intellectual property rights to Region 2 - or any other Region - to play in the US.
See all reviews
Back to top
Get to Know Us
Make Money with Us
Amazon Payment Products
Let Us Help You
EnglishChoose a language for shopping. United StatesChoose a country/region for shopping.
© 1996-2022, Amazon.com, Inc. or its affiliates