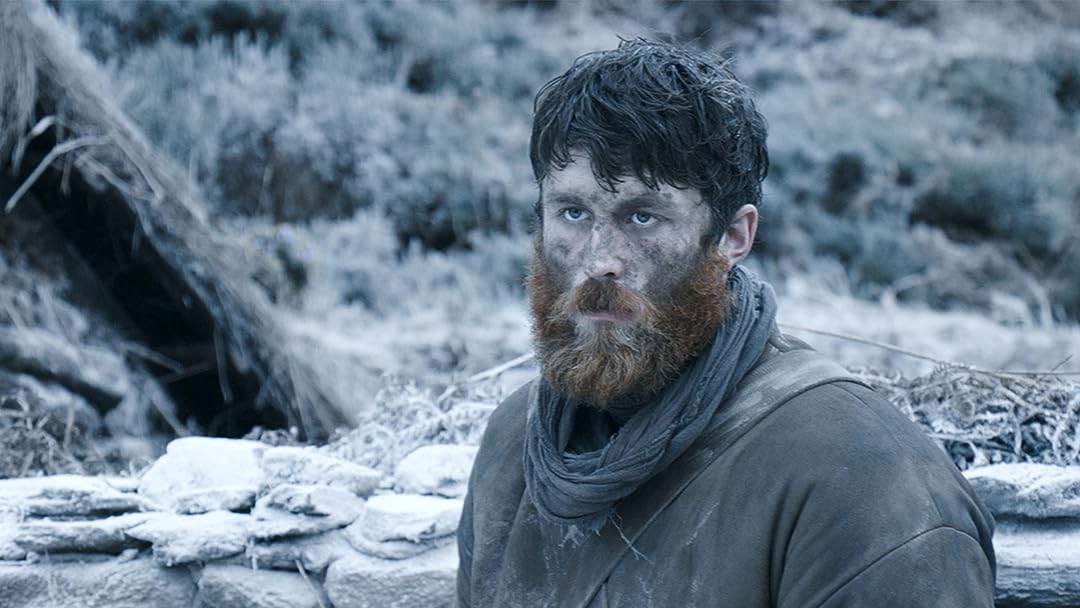 (1,117)
6.81 h 39 min2018X-RayR
One soldier's ruthless pursuit of justice plays out against the darkest chapter of Irish history in this riveting revenge thriller. Starring Hugo Weaving and Jim Broadbent.

H. P.Reviewed in the United States on March 27, 2019
4.0 out of 5 stars
Less an Irish Braveheart than an Irish Outlaw Josey Wales
Verified purchase
“In the year of 1845 a terrible famine descended upon Ireland. Within a few short years, 1 in 4 of our people would be gone forever—fled to England or North America . . . or dead from starvation or fever. Irishmen who had enlisted to fight for the occupying British crown in its foreign wars returned home to find only death and destruction in every corner of the land.”

Black 47 is a vigorous, stylized revenge thriller-cum-historical drama. An “Irish Braveheart” isn’t quite a fitting label, for reasons I will get into below. A top-notch neo-western, Black 47 is more an “Irish The Outlaw Josey Wales.”

Feeney returns from service to the Crown as a Connaught Ranger in Afghanistan to find his home tumbled and inhabited by pigs, his mother starved, his brother hanged. We later learn he deserted. He plans to continue on to America, enjoining a young woman and her family to join him (if the movie makes their connection clear I missed it). But history sets to repeating itself, and not tardily. A tumbling of her home results in the killing of her brother, Feeney’s arrest, and her death from exposure that night. Now wanted in Ireland, Feeney’s mind turns back from America toward vengeance.

After the initial setup (much of it in subtitled Gaelic), the focus shifts to Hugo Weaving’s Hannah. Hannah is a failed policeman awaiting execution for killing a prisoner. He is given a reprieve in return for agreeing to hunt down Feeney. We mostly follow Hannah and the English captain accompanying him as they track Feeney’s killings across twisted Irish landscapes pocked with gaunt, dirty Irish (entertainment news is always going on about some actor or another losing weight for a role—every actor and extra who plays an Irish person in Black 47 looks like they’ve been on a crash diet for the last three months).

The change in focus makes for a slow burn. Much of the increasingly stylized violence takes place off screen. Black 47 isn’t a horror movie by any stretch of the imagination, but horror tropes are used to good effect. The tension is punctuated by set pieces that are absolutely electric. Between the subtitles, the scenery, and the action, you won’t want to take your eyes off the screen, so close the laptop and pour yourself a few fingers of Irish whiskey.

Black 47 isn’t as Hollywood as Braveheart, a finely made film that never takes the hard road storytelling-wise and only makes passing jabs at historical accuracy. Black 47 doesn’t follow conventional models. It isn’t the deaths of his family that sets off the violence, and the groundwork for his rampage is sparse. It sometimes feels less like righteous vengeance than inchoate rage. I’m not sure the filmmakers ever want us to feel entirely settled in enjoying the violence.

But then one of the very Hollywood aspects of Braveheart is that William Wallace shows limited interest in the Scottish cause until it affects him in a very direct way. But, for Black 47, this time it isn’t really personal. Feeney is a man with a particular set of skills—the finest soldier Hannah ever knew—but the film makes clear his story is one played out across Ireland over and over throughout the Great Hunger. The alternative to the view from the above paragraph is that the film is aimed at Irish partisans. Or, savvily, aimed well at both. Black 47 did well in limited release in Ireland, but should be appreciated by audiences in America and elsewhere. You don’t need to be a Southerner or Native American to appreciate The Outlaw Josey Wales, after all.

Black 47 isn’t subtle with its positioning. The film has a lot of sympathy for Irish who sit through hours of Protestant preaching and “renounce the Roman Catholic Church” in return for soup (“We all ate the soup”), who cooperate with the English (including the translator who gets the memorable “beauty would be held in much higher regard, sir, if it could be eaten” line), and who, like Feeney, take the Crown’s money to serve in its armies. Those who take direct part, on the other hand, receive no sympathy. They also never, ever take responsibility for their actions. It is always the fault of their superiors or the Irish themselves. A sergeant who shoots a man claims, “I only followed his Lordship’s orders.” His Lordship can muster no more than “that seems accurate” in response.

There is too much here to like to list it all. I will highlight how visually striking the movie is, the frequent black powder gun fights and Feeney’s free hand with his kukri, and the electrifying first meeting between Feeney and Hannah. With a runtime of just an hour and 40 minutes, the pacing is brisk. My only real complaint about the movie is that it doesn’t quite manage to properly build to an effective climax. It is a proper climax in theory but didn’t stir in me the emotional crescendo of a great climax.

I’ve seen some critics complain that it tries to be both a serious historical drama and a revenge thriller. One of the reasons I love country noir and its cousin literary sub-genres is that they, more than any other sub-genres I have found, marry all of the best aspects of literary and pulp writing. Black 47 isn’t quite a great movie, but it does the same.

Mary OpinesReviewed in the United States on October 8, 2018
5.0 out of 5 stars
Now in my top 5 favorite movies.
Verified purchase
This movie is excellent! I happen to love Irish made movies because they are so much better than American movies and this movie did not disappoint. Historically accurate and the acting is superb.
31 people found this helpful

K. MitchellReviewed in the United States on December 19, 2018
4.0 out of 5 stars
Important movie to watch
Verified purchase
Finally, a movie about the Irish Famine, by the Irish. This is a subject that should not be forgotten or swept under some political rug. It will mean more to you if you know something about what the English did, but even if you don't, the story makes sense. I didn't give it 5 stars because I felt some of the story should have been developed a bit more.
19 people found this helpful

Trich MaupinReviewed in the United States on September 30, 2018
5.0 out of 5 stars
Fantastic!!!
Verified purchase
Fantastic movie! Very heart breaking excellent portrayal of the pain and suffering of the Irish. Very well done and worth buying!
25 people found this helpful

ImmerReviewed in the United States on October 15, 2021
4.0 out of 5 stars
Grim But Informative Fictional Story
Verified purchase
Many reviewers coin this film as an Irish: Braveheart; Rambo; Josey Wales, etc, and if the viewer looks at the movie as just some sort of action/revenge flick, that’s what it is. The grim beauty of Black 47 is its informative/educational value. I was aware of the Irish Potato Famine, but never gave it much thought other than it provided the impetus for mass immigration of Irish to the United States and probably Canada.
Black 47’s value is four- fold
1. It depicts the grim reality of the third and worst year of the famine, and the utter destitution of the Irish people.
2. The treatment of the Irish by their British overlords was without sympathy or empathy, and the resulting antagonistic attitude exists til this day.
3. The movie provides a glimmer of why there exists continued acrimony between Irish Catholics and Protestants.
4. The movie has the capacity to provide the viewer with the impetus to research (its at your fingertips) information about the three aforementioned statements.

If for no other reason, this makes a very well acted Black 47 an educational stimulus worth seeing.
2 people found this helpful

ShariReviewed in the United States on October 16, 2018
5.0 out of 5 stars
Revenge
Verified purchase
Movie about the Great Irish Famine and revenge! Wish it would have gone a bit more into detail, about how the Brits were taking the food and shipping it out, leaving the Irish to starve. Still a good movie. Heart breaking, since my Irish Ancestors fled during the famine.
19 people found this helpful

ReviewerReviewed in the United States on October 7, 2018
5.0 out of 5 stars
A great historic drama. Well worth the watch.
Verified purchase
Really really liked it. Great story fulfilled with a huge history. While a movie like this could only touch on the main ideas of a pivotal moment in world history, it hit all the main points of the great hunger while at the same time providing a thrilling drama.
16 people found this helpful

southern ladyReviewed in the United States on April 7, 2019
4.0 out of 5 stars
Harsh 1834 British Poor law Cruelity towards an entire country as told by The Irish film industry.
Verified purchase
Exposure of just how cruel humans can be towards each other. Irish 8.4 million 1844 population fell to 6.6 million by 1851. In the years between 1845 and 1855 more than 1.5 million adults and children migrated seeking refuge in America. A country that treatment was not charitable or sympathetic. Predjudice was normal towards an entire population of Irish Immigrants. Insult to injury. At least in America they had a chance to escape the cruel treatment by the ruling, British and wealthy Lords of Ireland crueler treatment. The poor were treated as savage animals which were disposable. Death and disease from starvation were no incentive to stay in their own country. If you ever wonder why the Republic of Ireland was formed which separated most of the country to Independent rule split from Britain then turbulent history will give you the answers.
One person found this helpful
See all reviews
Back to top
Get to Know Us
Make Money with Us
Amazon Payment Products
Let Us Help You
EnglishChoose a language for shopping. United StatesChoose a country/region for shopping.
© 1996-2022, Amazon.com, Inc. or its affiliates