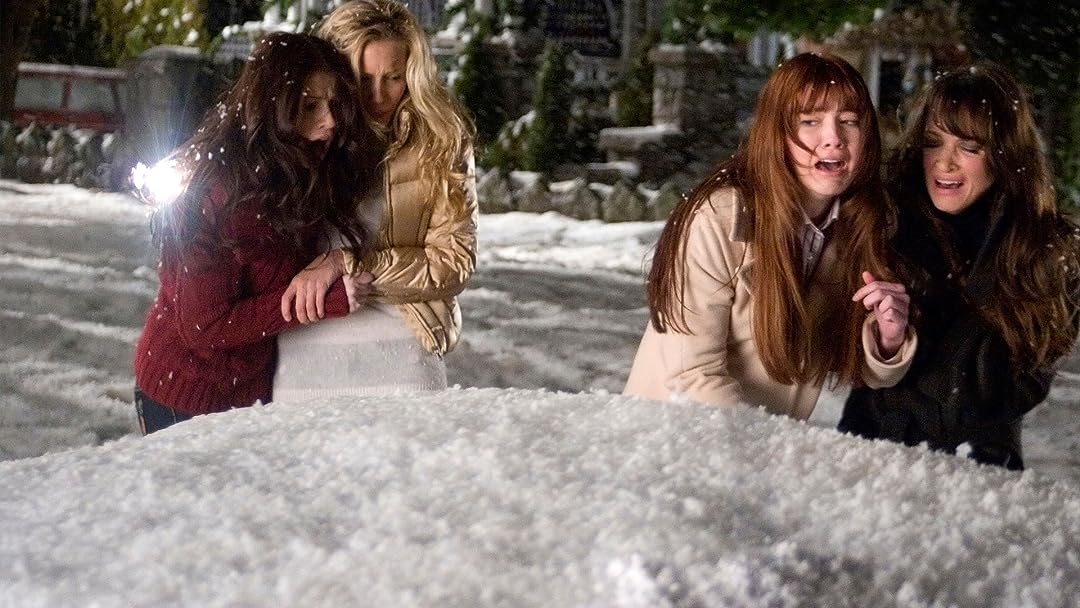 (2,104)
4.61 h 32 min2006X-RayR
An escaped maniac returns to his childhood home on Christmas Eve, which is now a sorority house, and begins to murder the sorority sisters one by one. A remake of the 1974 film by Bob Clark.

#11,516,237Reviewed in the United States on December 27, 2020
5.0 out of 5 stars
Really fun popcorn flick!
Verified purchase
The original 1974 Black Christmas is a classic — underrated, creepy, well-acted and directed, and completely influential. 2006’s remake strays far away from the path but despite its flaws and shortcomings, it’s a really fun, goofy, fast-paced good time.

Underrated and talented director/writer Glen Morgan tried his best, and unfortunately studio interference derailed his initial vision for the remake. What remains is a lot of gore, an unnecessary backstory for Billy, and an over-the-top 90 minutes of slasher madness that the 80s would be proud of. Of note is the excellent cast, who all perform very well in their roles. In particular, Katie Cassidy makes for a smart, proactive, capable, brave final girl as Kelli Presley, who is the resident Nancy Drew and faces off against the killer(s). Kristen Cloke is a complete scene-stealer as Leigh, a character who could have been a one-note side role, but she gives her emotional nuance and makes her the most memorable of all the characters. The great Andrea Martin is here too, having played Phyl in the original, but now playing housemother Mrs. Mac.

The colors and atmosphere in the film are cozy and evoke a definite Christmas feeling. Combined with the abundant and graphic kills, trapped-in-the-house set-up due to a raging snowstorm outside, and a general sense of mean-spiritedness, this can’t be compared to the original and should be taken on its own merits. That being said, it’s not particularly scary but it is a blast to watch if you aren’t looking for anything too discerning or heavy-handed. It’s a fun, enjoyable, entertaining watch and nothing more. It’s become a staple of the Christmas season in my house, along with the original, Night of the Comet (1984), Silent Night Bloody Night (1972), and The X-Files “How the Ghosts Stole Christmas” episode.

Whether you’re having a night in on the couch with a comforter and some snacks, or you’re with a group of friends, this is a movie that can absolutely be appreciated (as imperfect as it is) thanks to its enthusiastic and lively mood. Highly recommended!

E. CeronReviewed in the United States on January 20, 2020
4.0 out of 5 stars
Good acting and very bloody.
Verified purchase
I git this DVD used for a great price, it played like if it was brand new, the art work and case are in very good condition,. As for the movie, I like the story line, you have to follow the years when things happened, good acting, Oliver Hudson is great, the girls in the story are very beautiful, some parts of the movie are well achieve, like the parts of Billy's mother, she's a complete nut job. This is a good addition to my horror movie collection.
4 people found this helpful

Chris WReviewed in the United States on November 28, 2020
5.0 out of 5 stars
Good Slasher Movie
Verified purchase
This is a cut above the normal slasher style film. It actually has a good story line, with enough thought put into the concept that it works fairly well. In other words, it's not your typical T & A material....it has more substance than that
2 people found this helpful

Movie NerdReviewed in the United States on January 20, 2020
3.0 out of 5 stars
Perfectly Naughty, Just Not a Perfect Movie
Verified purchase
A cast of beautiful talented actresses are slaughtered and wasted. By a crazy yellow guy and his sister/daughter. That’s about it, one dimensional characters with no build up, killed violently.
Black Christmas at least kept my interest until the end, due to the cast. Afterwards all the silliness and ugliness left a bad taste in my mouth.
4 people found this helpful

Mad CollectorReviewed in the United States on April 17, 2007
3.0 out of 5 stars
Wacky Black X-mas!!!
Verified purchase
Well, I admittedly am a fan of the original, so I expected something of even greater grandeur here. I did not find it.

The filmmakers took all that was cliche about recent horror movies and forced it into the theme of this film--completely ignoring what made the first movie so eerie and unsettling. This is "bubble-gum pop" horror--a sort of manufactured movie that would appeal to those who savor eating popcorn after tucking their gum behind their ear. A nice surprise was seeing Andrea Martin from the earlier "Black Christmas" appear as the sorority house mother. And an even better bonus were the disc's extras! The "making of" segment was actually more entertaining than the movie itself. It was also educational, harkening back to the early days of DVD when disc extras were so new-fangled and exciting that filmmakers loved giving away all their movie's secrets within a half-hour time span.

Check this one out only if you hate the holidays and need an escape from your "horrific" family traditions.
2 people found this helpful

Stephen B. O'BlenisReviewed in the United States on September 4, 2007
4.0 out of 5 stars
Four-And-A-Half Stars For One Of The Most Consistently Underrated Horror Movies Ever
Verified purchase
The remake of "Black Christmas" has got to be among the most consistently underappreciated slasher movies ever made, maybe among the most consistently underaappreciated of all movies. Managing to hit both the bases of being both 'disturbing and tremendously creepy' and 'fun and sexy with dashes of humor', "Black Christmas" takes horror slasher backwards in that it's non-supernatural, with a potent but not apparantly-indestructible villain. It's a route not a lot of its recent peers have taken, with most of the pack trying (and sometimes even succeeding) to follow the path of series like "Nightmare On Elm Street" and "Friday The 13th", which have utilized virtually unstoppable, inhuman, central figures, and often a large dose of additional otherworldly elements, in being great. (Well, not Every chapter was great, but an awful lot of them were...)

With a simple premise that starts to twist and branch out some in the second half, the movie features a group of sorority sisters and their chaperone stormstayed in their campus dormhouse during the Christmas holidays. The same building that was once the site of a massacre where Billy Lentz killed his abusive mother and stepfather, and maimed his defenceless little sister. Billy is, at the film's beginning, now locked up in a psych ward, but it probably would have been harder to make this into a great horror movie had he Stayed securely locked up in a place of mental healing...

Fans will know a lot of what comes next. Actually, a lot of it would have been harder to predict had there not been spoilers as to the movie's third act all over the place before it even got released. For those who fortunately haven't heard, I won't spoil the twists by revealing them here, but focus on some general observations. First off, even if you've seen a thousand horror movies, this one can be jarring. The violence is swift and gruesome, and often hits characters you really want to make it out unscathed. All the horror violence, all the creepy going-ons, and all the disturbing thematic elements (including the origins of Billy and his sister), taking place amidst the gently twinkling Christmas lights, the classic holiday songs on the radio, and a generally pleasant setting, makes for a really twisted and freaky feel to things. I liked the cast of characters they put together for this (the female contingent, incidentally, being played by perhaps the best-looking ensemble of actresses ever to appear in a single movie, including mega-hottie Mary Elizabeth Winstead from "Final Destination 3" and "The Ring Two"). I liked the angle with the woman who came looking for her estranged younger sister and a scheduled Christmas reunion, and the bond that developed between her and the girl at the dorm who's never had siblings. I liked, loved actually, almost the whole thing...except for some glaring details that stand out and keep "Black Christmas" from getting the five-star rating that I really want to give it.

First of all, there's a major problem with the snow. In several shots it doesn't even look real, which juts out like a sore thumb when compared to the overall high production values you're seeing it against. And the storm is supposed to be this big whopper that's snowed everything in, that's knocking down big trees across the roads so vehicles can't get around, etc. Yet when you see outside the windows a couple of times, and even in a couple of the outdoor scenes, all you've got is a nice hearty downfall of snow, but not the blizzard of the century. These lapses should have hurt the movie more than they did (would it really have been that hard to add in a nice, howling wind to the outdoor scenes?) but overall it's so good it earns a few moments where you have to suspend disbelief. Also, during the flashback scenes, although they were very freaky, a case could be made that portions of the earlier flashbacks came off slightly campy. It doesn't feel right to be spending so much time, though, on the few flaws when as a complete package you've got one of the finest movies of 2006. This is ten times as good as its reputation makes it out to be, and among the best recent picks for horror fans. Four-and-a-half stars with regret that it couldn't be more; and highly recommended. Fans of this may also want to check out "Valentine", "Cutting Class", and "Cry_Wolf".
2 people found this helpful

Greg ArdenReviewed in the United States on November 19, 2013
5.0 out of 5 stars
A Pretty Darn Good Remake
Verified purchase
"Black X-Mas" is a remake of one of the best Christmas-themed horror films ever made! It stars Katie Cassidy ("Taken"), Michelle Trachtenberg ("EuroTrip", "Criminal Minds"), Crystal Lowe ("Final Destination 3", "Hot Tub Time Machine"), Mary Elizabeth Winstead ("The Thing", "Grindhouse: Death Proof") and Lacey Chabert ("Mean Girls"). It's about a group of sorority-sisters who have to match wits against a monster. The special effects are great, the acting is great, and it's a surprisingly funny--yet gory--film! I recommend it!
18 people found this helpful

ahooReviewed in the United States on January 29, 2022
5.0 out of 5 stars
i love this movie
Verified purchase
a remake of one of the cult classics.
i heard there is a newer remake as well.
what can i say- i love cultie horror flicks.
One person found this helpful
See all reviews
Back to top
Get to Know Us
Make Money with Us
Amazon Payment Products
Let Us Help You
EnglishChoose a language for shopping. United StatesChoose a country/region for shopping.
© 1996-2022, Amazon.com, Inc. or its affiliates