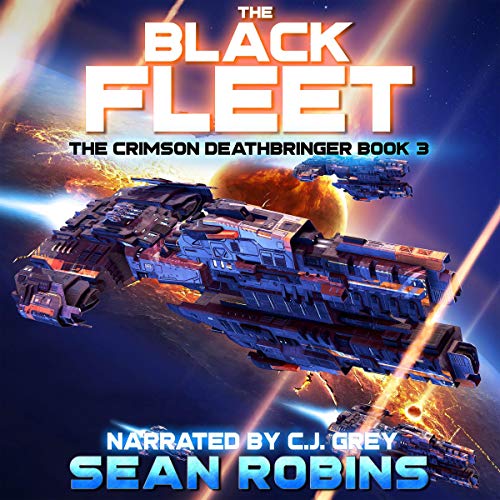 Raelyn Houston
5.0 out of 5 stars I’m Ready for the Movie!
Reviewed in the United States on October 8, 2021
Verified Purchase
This book was full of so many highs and lows, it really kept you on your toes. It’s a book full of drama, suspense, disbelief, love, laughter, and loss. It has everything. And it all happens in the middle of a space war. There’s something for everyone here. I will admit, that there are a few losses I could have gone without, but…it’s war….
I’m excited to see what happens next in this crazy space faring world!

While you could probably read this as a stand-alone book, don’t. You will want to get to know the stories and the characters from the beginning. The character building in this series is fantastic and by book three you feel like you really do know them as real people!
Read more
One person found this helpful
Helpful
Report abuse

Kindle Customer
5.0 out of 5 stars Highly recommend for all science fiction or adventure readers!
Reviewed in the United States on February 5, 2021
Verified Purchase
Once more Earth and their portion of the galaxy is under attack. The force is an overwhelming of 250,000 warships from the future. General Maada’s Vortex planet is destroyed. They have evacuated many and General Maada was rescued by the Akakies, Their leader Tarq realizes his planet is also losing and evacuates as many as possible. He takes General Maada and flees to Earth to connect with Jim, his main pilot from Earth. He says he has a plan, but he really doesn’t. How do you defeat the Vox who are coming from the future with weapons they do not even understand? Is Earth doomed? How will the universe survive if all their planets are destroyed? They do not even know how to go to the future. It’s then that Jim comes up with his plan of going through the Vox “funnel” at a different point in time to take out the Vox planet before they can attack. Genocide becomes their reality also. Will the Earth people they send succeed? It is a last minute death fight with Jim and General Maada finally coming to terms with each other as they prepare to die. Tarq has called in the fighters from the rescued races, but even then they are completely outnumbered. It all depends on those who went through the funnel. Read this exciting to the end battle and judge for yourself.
Read more
Helpful
Report abuse

Guru
5.0 out of 5 stars Outstanding!!
Reviewed in the United States on February 9, 2021
Verified Purchase
Great addition to the series! Excellent battles - lots of consequences! Enjoyable humor and evolving and entertaining characters. Well worth the money. You will not be disappointed.
Read more
One person found this helpful
Helpful
Report abuse

Daisy
5.0 out of 5 stars Just keeps getting better and better!
Reviewed in the United States on September 16, 2021
Verified Purchase
Another book that just captivated me from the beginning and left me speechless and heartbroken towards the end. You get so invested in these characters and feel it when they are killed off and surprisingly even the evil prior characters are likeable now. Can't wait to see what happens next.
Read more
Helpful
Report abuse

Amazon Customer
5.0 out of 5 stars Fantastic!
Reviewed in the United States on January 27, 2021
Verified Purchase
Sean's fast-flowing, fascinating narrative is full of amusing topical and Sci-fi referents without being overburdened by allusiveness.
Read more
One person found this helpful
Helpful
Report abuse

Kenna McKinnon
5.0 out of 5 stars Most exciting yet!!!
Reviewed in the United States on December 24, 2020
I have followed this series with anticipation and am not disappointed by the 3rd in the trilogy of the Crimson Deathbringer books.

Here we have all our old friends, and some new, in a thrilling sequel to Books 1 and 2. Jim Harrison is his same swashbuckling self with the beautiful (and pregnant) Ella as a new partner, but never forgetting the love of his life, Liz. He faces a greater menace than ever before, from the future this time. We have Kurt, Cordelia, the Akakies and Vox warriors, Tarq, and mention of the infamous and bloody Battle of Tangaar.

"As two hundred thousand Vox soldiers dashed towards the golden planet - Next stop: Earth"- coming up for all Sean Robins fans who are following the fearless, arrogant, and fun loving Jim - and his new daughter or son? - into the future. Replete with pop references that will make you smile, I recommend The Black Fleet for some fun holiday reading, and the intriguing next in the series, which brings us to The Silver Timeship (The Crimson Deathbringer Book 4). Don't miss this series, which has a foot in the pop past, one in the technological present, and the other in the thrilling and dangerous future of humankind and their alien allies.

Lonnie-The GreatNorthernTroll-Moore
VINE VOICE
5.0 out of 5 stars The best yet!
Reviewed in the United States on May 9, 2021
Wow! This is probably the best Sean Robins' yet... and it's a doozy! You'll for sure need to get this and follow along with Jim, Kurt, and all of the Freedom Fighters, as once again they're called upon to save the Galaxy! As I said in my last review, Sean Robins doesn't hold back or pull any of his punches, and this book is no different!
In The Black Fleet, barely 5 years have passed since the events in Crimson Deathbringer, the first book of this series, and earth/mankind has begun to settle into peace! They're rebuilding both their societal infrastructure and family life that had been so abruptly ripped away at the onslaught of the havoc brought by the Xortaags and the first sighting of the Crimson Deathbringer!
Jim and crew find themselves making uneasy alliances in order to fight a greater evil than could ever be imagined! No matter the cost, the Black Fleet must be stopped!
So grab the audiobook and let a fantastic voice performer (CJ Grey) tell you a story! Or better yet grab the boxed set and prepare to lose yourself in three pulse pounding adventures!!!
Read more
Helpful
Report abuse

Eagle4Life69
5.0 out of 5 stars Dangit he did it again!!!
Reviewed in the United States on April 6, 2021
This is becoming an addiction, I love this book and found every chance I could to listen to it. Sean has found a way of breaking my heart and loves to kill off people you fall in love with and figure that character is never going away. He left me with my mouth open babbling about they can't be dead, there is no way they are dead, OMG they are dead, why did he kill them there was no reason.

If you have listened to books 1 & 2 you MUST listen to book 3. If you want to listen for the first time, get books 1 & 2 first and you will no be disappointed.

Also I wanted to note if it wasn't for C.J. Grey I don't know if these books would be the same. I love the full audio production on this and think all books should match this series on quality, attention to detail and overall perfect implementation of how audiobooks should be made in the 21st Century.

John
4.0 out of 5 stars A good read ?
Reviewed in the United Kingdom on August 27, 2021
Verified Purchase
A good read ?, Well it's well written and if you pick this book first then you would soon picture what has happened up to this point
Read more
Report abuse
See all reviews
Back to top
Get to Know Us
Make Money with Us
Amazon Payment Products
Let Us Help You
EnglishChoose a language for shopping. United StatesChoose a country/region for shopping.
© 1996-2021, Amazon.com, Inc. or its affiliates