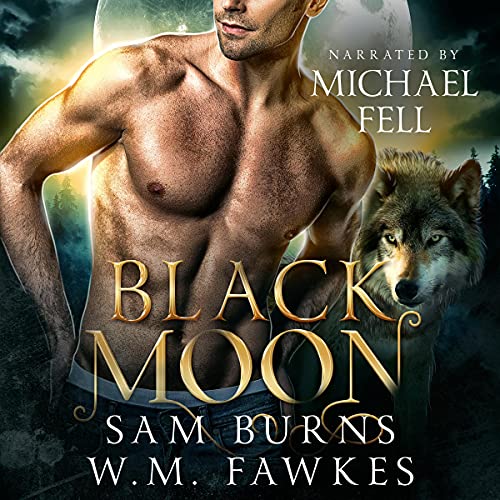 An apple a day won’t keep this doctor away.

Linden Grove has always known that he’s not destined to be the next pack alpha. That position belonged to his brother Aspen - but then Aspen left the pack to join the military. When the unthinkable happens and the pack is left rudderless, someone has to step up and take care of it. Can a doctor go from “do no harm” to defending his own with his teeth and claws?

Colt Doherty is used to a certain kind of life. Glittering, picturesque, and...empty. As the youngest child of the country’s only werewolf senator, Colt has grown up in the spotlight, and he’s all too used to knot-headed alphas taking credit for the work of others, especially omegas like himself. When his editor sends him to write a story on the Grove pack, though, he finds something completely unexpected: Linden Grove in his unpolished perfection, as shiny and sweet as the apples his pack are known for.

A Grove pack omega has been kidnapped, and someone has to step up. The pack needs Linden to fill his father’s shoes, but no wolf can stand on his own. To save the day, sheltered Colt has to drop the politics and become the action hero he never thought an omega could be.

Black Moon is an 90k word standalone novel featuring one fiery journalist, one doctor with an obsession for hand knit sweaters, and the sweetest apple pies on the whole eastern seaboard, all bundled up in a non-mpreg A/B/O universe.

Heather S.
4.0 out of 5 stars Not Just Another Alpha/Omega Book.
Reviewed in the United States 🇺🇸 on August 3, 2022
Verified Purchase
I read this book on Kindle Unlimited. Therefore, I didn’t go in expecting much from this book. It’s just another werewolf (Alpha/Omega) romance (sex) book, right? Wrong. This book was well written and very easy to read. I got so involved with it that I read it in one sitting. I enjoyed the main characters of Linden (a non-traditional alpha) and Colt (non-traditional omega). The characters are well developed and show further development throughout the story. There is a self-contained plot for the novel so there is no cliff-hangers per se, but there is an over-arching plot as well that carries through the entire series. So if you plan to read the series, you’ll want to read them in order. Does it have some flaws? Sure. It’s a romance so the relationship can seem a little rushed (insert werewolf alpha/omega mate mythos here). But it’s a fun read that I really enjoyed. I ended up reading all 5 in the series.
Read more
One person found this helpful
Helpful
Report abuse

Dale
5.0 out of 5 stars Got to love a subdued looking alpha. They'll surprise you every time!
Reviewed in the United States 🇺🇸 on May 27, 2022
Verified Purchase
This was definitely a good story. Cold the young eager reporter thinking he'll find a story definitely find something even more. Linden the quiet reserved somewhat subdued looking alpha doctor of the Grove pack find something more as well. Through all the trials and tribulations that happened after the two meet, things just get better for the two of them. They finally realized you never know what fate and life is going to throw your way. I can't wait for the next book.
Read more
Helpful
Report abuse

Kindle Customer
4.0 out of 5 stars A shifter romance with feisty, sparks & justice - A terrific start to the series, I can't wait til the next book and you will too!
Reviewed in the United States 🇺🇸 on December 29, 2021
Verified Purchase
The Alpha is a leader of the shifters and the meaning of what a good or great Alpha nerds is what gets clarified during the selection of a vacant Alpha position. Throw in kidnapping, illness, family drama and you have a lot to unravel. However I would say its worth the journey. The romance is sweet the feeling as its your place is what makes the book a true hit. MM Romance
Read more
Helpful
Report abuse

Georgia
5.0 out of 5 stars Apples, Alphas, and Omegas
Reviewed in the United States 🇺🇸 on May 23, 2021
Verified Purchase
I didn’t expect to love this book. The whole alpha/omega smutty storyline has been done absolutely to death, but this story totally exceeded my expectations! This book is perfect if you’re tired of stale alpha/omega tropes, don’t like m-preg, and want something different.

I loved the characters of Colt and Linden. They’re both polar opposites; Linden is neat and calm while Colt is fiery and headstrong. Linden is a country boy and Colt is a big city dreamer. Linden is different from any alpha Colt has ever met; patient and quiet and kind, and it’s easy to see why Colt loves him. I empathized with Lindens inner struggle, his doubts and his fears about becoming alpha when his father is suddenly murdered. I admired Colt for wanting to be more than his omega birthright.

The storyline is very intriguing and sucked me in. I’m very curious to learn more about the Condition, and my God, I’m so happy Brook will have his own book! My heart went out to him, and I’m burning to know more about Aspen.

I’m off to read the second book! I can’t wait to see how the story plays out.
Read more
5 people found this helpful
Helpful
Report abuse

Lori E. Jones
5.0 out of 5 stars Great book ( and series)
Reviewed in the United States 🇺🇸 on January 9, 2022
Verified Purchase
So, I totally waited until I’d finished the series to leave this review. I wanted to leave it on book one so those looking to start it would know what they are getting into.

I really enjoyed the book and the whole series. I was expecting it to be…darker…so I didn’t read it right away. I was glad to find that it was not really dark at all. Nothing wrong with dark, but you don’t always want that.

The characters are well developed. The writing was excellent. The spin on the alpha/omega dynamic was a bit different than anything I’ve read before. It was great getting to know the whole town.

michael buskirk
4.0 out of 5 stars Great world
Reviewed in the United States 🇺🇸 on May 12, 2021
Verified Purchase
Why has it taken me so long to find this gem. I adored both MC’s the town, just everything. I love fiesty independent omegas, and strong yet soft alphas. The denial about being mates, the struggle of fitting in and finding ones place while finding love. Sigh. This was a great book, had all the emotions and feels. The writing was great the smexy was YES and the side characters were everything you need in small town side characters. I’m looking at the next book though and I don’t know how so many left over questions are going to be told seeing as it’s knew characters that we hadn’t met. So many questions which is why I can’t give a 5.
Read more
7 people found this helpful
Helpful
Report abuse

Books are Life!
3.0 out of 5 stars Shifter MM
Reviewed in the United States 🇺🇸 on June 5, 2022
Verified Purchase
3 stars!

I liked this first book that introduced the grove pack. Book 1 was filled with a lot of action early on but started to get more political near the end.

I enjoyed seeing this couple have a bit of a fated mate style romance.

I can't wait to see what happens next.
Read more
Helpful
Report abuse

Kindle Customer
4.0 out of 5 stars This is the first book in the :Wolf Moon Rising Book Series .
Reviewed in the United States 🇺🇸 on July 11, 2021
Verified Purchase
This was a decent start to a new M.M Shifter Romance series but it didn't blow me away . To me the main couple was kinda bland their relationship was dull and I really wasn't feeling the chemistry between these two . Don't get me wrong I did like the plot loo one of this book but it just didn't grab my attention . I hope that the other books in this series have more character development .
Read more
Helpful
Report abuse
See all reviews

Li Taylor
5.0 out of 5 stars Very good
Reviewed in the United Kingdom 🇬🇧 on June 1, 2021
Verified Purchase
I really enjoyed this book it was a slow boil read with some high tension moments and a HEA ending I’m looking forward to more from this series . A must read
Read more
One person found this helpful
Report abuse

Fiona
5.0 out of 5 stars Romance, family, thriller and politics
Reviewed in the United Kingdom 🇬🇧 on June 6, 2021
Verified Purchase
A good ole fashion romance with funny and sexy moments, as well as thrills, action, politics and family. Left me smiling and looking forward to reading the next one in the series.
Read more
Report abuse

Jill Stock
3.0 out of 5 stars Start of...
Reviewed in the United Kingdom 🇬🇧 on July 17, 2021
Verified Purchase
The start of a series centred around a different kind of pack. Liked it but wasn't totally bowled over. I think I need to read the next book to truly decide.
Read more
Report abuse

Chris Greenwood
3.0 out of 5 stars Laborious
Reviewed in the United Kingdom 🇬🇧 on October 18, 2021
Verified Purchase
This book just did,t do it for me.
The story had it,s moments but it just didn,t grip me
So books 2 ,3,4 will not interest me.
Read more
Report abuse

Khatirana
5.0 out of 5 stars Sweet story
Reviewed in the United Kingdom 🇬🇧 on July 13, 2021
Verified Purchase
Good story with an atipical Alpha and Omega characters. I really like it and recommend to give it a go.
Read more
Report abuse
See all reviews