Black Profiles in Courage and millions of other books are available for Amazon Kindle. Learn more 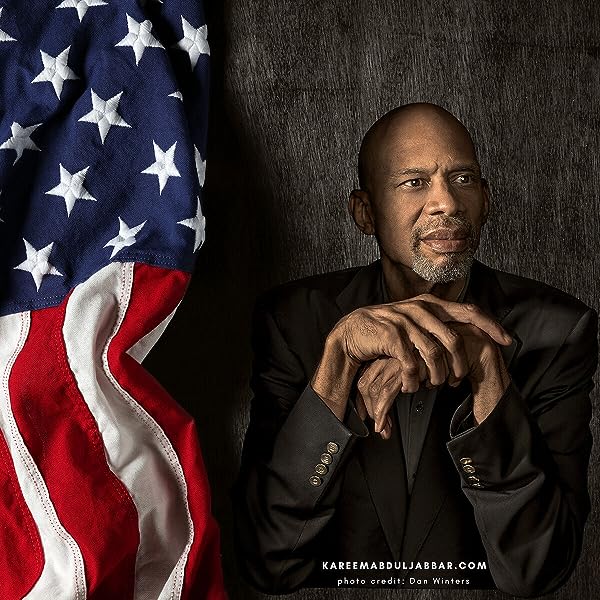 by Kareem Abdul-Jabbar (Author), Alan Steinberg (Author)
4.8 out of 5 stars 87 ratings
See all formats and editions
Sorry, there was a problem loading this page. Try again.

In this ideal introduction to black history, Kareem Abdul-Jabbar examines the lives of heroic African Americans and offers their stories as inspiring examples for young people, who too rarely encounter positive black role models in history books or in the media.

Profiled here are Peter Salem, the volunteer soldier who turned the tide at Bunker Hill; Joseph Cinque, leader of a daring revolt on the slave ship Amistad; Frederick Douglass, self-taught writer-orator and escaped slave who forced President Lincoln to issue the Emancipation Proclamation years ahead of schedule; Harriet Tubman, who led at least three hundred slaves to freedom; Lewis Latimer, whose scientific work was integral to the achievements of Bell and Edison; and many more.

Shining a bright light on the touchstones of character, these exemplary stories reemphasize the integral role of African Americans in weaving the fabric of our nation and form an empowering legacy from which Americans of all ages can draw inspiration, wisdom, and pride.

"Abdul-Jabbar sets the record straight...with impassioned storytelling and prose as deft as one of [his] patented hooks from the paint." -- --People

Kareem Abdul-Jabbar retired from basketball in 1989. The author of bestsellers Giant Steps and Kareem: Reflections from Inside, he remains a devout Muslim and an active, articulate spokesperson for African-Americans.

Alan Steinberg is the author of numerous books, including the New York Times bestseller Behind the Mask and Black Profiles in Courage with Kareem Abdul-Jabbar.

Start reading Black Profiles in Courage on your Kindle in under a minute.

Kareem Abdul-Jabbar is a huge Holmesian--7'2&quot; tall, basketball's all-time leading scorer, and recipient of the Presidential Medal of Freedom (our nation's highest civilian honor) which was awarded from President Obama. He writes extensively, for The Hollywood Reporter &amp; The Guardian Newspaper and has published 15 books; Giant Steps (biography), Kareem (last year in NBA), What Color is My World (children's), Profiles in Black Courage, Brothers in Arms (military history), On the Shoulders of Giants (black history), Coach Wooden &amp; Me (our 50-year friendship and Becoming Kareem On and Off the Court (YA). His first novel Mycroft Holmes, starring Sherlock Holmes lesser well known but far more talented older brother, was published in 2015. The Mycroft trilogy is now complete and available online.

4.8 out of 5 stars
4.8 out of 5
87 global ratings
How are ratings calculated?
To calculate the overall star rating and percentage breakdown by star, we don’t use a simple average. Instead, our system considers things like how recent a review is and if the reviewer bought the item on Amazon. It also analyzes reviews to verify trustworthiness.
Top reviews

N. S. Robb
5.0 out of 5 stars Should be required reading for all young people
Reviewed in the United States on May 30, 2007
Verified Purchase
I bought this book in hardcover when it first came out and since then have bought several copies to give to other people, both black and white, both young and old. Without fail, this book has impacted people, and every one of them has told me how much they learned from this wonderful book.

Kareem Abdul-Jabbar did a masterful job in gathering these inspiring stories from what has been, unfortunately, the footnotes of history, if they were acknowledged at all. The achievements by black Americans and their contributions to this country have been largely ignored by historians until recently. And even today, many black Americans who were not taught as young people about their heritage remain oblivious to what should be a matter of great pride.

We have taken great steps to equalize human rights, but we still have a way to go to completely obliterate the racial prejudice many of us grew up with. Books like this by people with the stature of Kareem Abdul-Jabbar will help get us to where we should be--respecting people of all races, colors and creeds.
Read more
9 people found this helpful
Helpful
Report abuse

Sonja L. Reiter
4.0 out of 5 stars Important Piece of Work
Reviewed in the United States on February 9, 2014
Verified Purchase
This is another topic that has been overlooked by writers to a significant extent, although there have been some good books about famous black folks.
The number who have given significant or amazing contributions has been greatly left out of American history. This book helps to fill the gap.
Read more
4 people found this helpful
Helpful
Report abuse

KMAK4
5.0 out of 5 stars THE REAL BLACK HISTORY
Reviewed in the United States on March 17, 2011
Verified Purchase
EXCITING BLACK ACHIEVEMENTS THAT WILL CAPTURE THE EYES & HEARTS OF BABYBOOMERS TO PRE-TEENS. I HAVE PURCHASED THIS DELIGHTFUL BOOK 5 TIMES & EACH TIME THAT I LOANED IT OUT, THE READERS WERE SO OVERWHELMED WITH THE CONTENT THAT THEY REFUSED TO RETURN THE BOOK TO ME. MR. JABBAR PRESENTS EACH CHARACTER WITH A BIT OF AN ATTITUDE THAT ENCOURAGES THE READER TO NOT PUT THIS BOOK DOWN. MR. JABBAR CLEARLY DEMONSTRATES HOW HISTORIANS DELIBERATELY DELETED AFRICAN AMERICAN ACHIEVEMENTS FROM TRADITIONAL HISTORY BOOKS & HE MAKES SURE THE READER UNDERSTANDS THE OVERWHELMING OBSTACLES THAT EACH HERO IN THIS BOOK FACED ON A DAILY BASIS. THIS BOOK SHOULD BE REQUIRED READING IN MIDDLE SCHOOLS THROUGH COLLEGE. WELL DONE KAREEM!
Read more
2 people found this helpful
Helpful
Report abuse

MW
5.0 out of 5 stars Black Profiles in Courage...Exactly what we need to share with everyone!
Reviewed in the United States on January 12, 2015
Verified Purchase
I purchased this book years ago. I lost it and decided to buy it again so that I may impart the valuable information in this book to my children. It was well worth the purchase.
Read more
One person found this helpful
Helpful
Report abuse
See all reviews