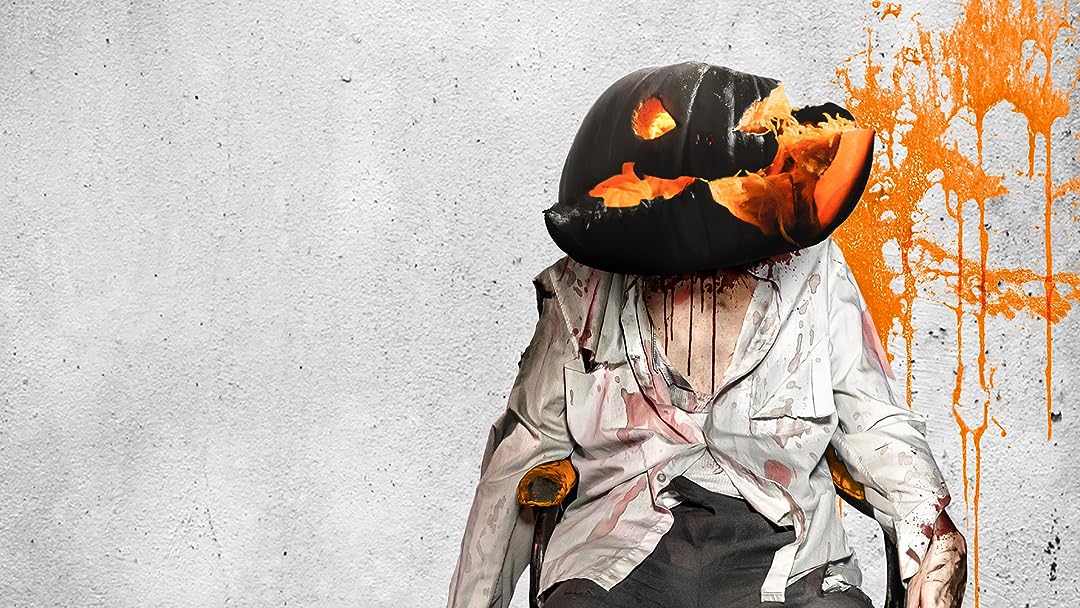 (112)
4.11 h 31 min2018X-Ray16+
On October 31, 2018, two preteens in a small town accidentally awaken an evil that has lain dormant for decades. They are forced to survive through a terrifying Halloween night of cat-and-mouse, from the monster known as "Bloody Bobby".

MegReviewed in the United States on March 31, 2021
1.0 out of 5 stars
Snooze fest
Verified purchase
This was mostly a showcase for the blonde girls butt cheeks to be shown in her underwear several times. Also to stereotype the chubby kid stuffing candy in his mouth and getting it all over himself. Mediocre story line, lame special effects and bland acting all around. More like 'horror' for 'tweens.
11 people found this helpful

Richard P.Reviewed in the United States on October 30, 2021
3.0 out of 5 stars
Practically the Definition of a Mid-Range Halloween Horror
Verified purchase
First-time writer/director Ryan McGonagle may not infuse "Black Pumpkin" with a whole lot of originality, but this mid-range Halloween horror has its share of chills and thrills that make for a solid, if unremarkable, view for your home-based Halloween viewing.

The story itself borrows from Halloween flicks past. Two pre-teens, Elliot (Dogen Eyeler) and Pork Chop (Grayson Thorne Kilpatrick), are dabbling documentarians putting together footage around a local urban legend. Unfortunately for them, and the town of Fall Creek Valley, they accidentally awaken an evil that has lain dormant for decades and the terrifying result is a night spent on the run from an evil force known as Bloody Bobby.

I'm not sure there's anyone here destined to become a household name, though the ensemble cast has fun with the material and the film itself feels ideal for a late night Halloween season at home. This isn't the kind of flick you see at a multiplex, though it held my attention for a good majority of its 82-minute running time.

"Black Pumpkin" is a sequel of sorts to "Bloody Bobby," a fact necessary to know only to realize the vitality of this film's opening scene involving the massacre of a former Fall Creek Valley sheriff (David Uchansky) and his daughter (Kamilla Alnes). Once we've established that relationship, "Black Pumpkin" goes present day and centers around a very vengeful Bobby.

British actress Ellie Patrikios shines as Laurie, the older sister of Elliott and babysitter tasked with watching the kiddoes on Halloween despite her own plans to spend time with her quarterback boyfriend.

You definitely know where all this is going.

Despite a handful of decent kills, "Black Pumpkin" is a fairly generic, 80's-tinged horror flick that elicits more chuckles than gasps. Bloody Bobby, played by Jo Osmond, is fun to watch and I found Patrikios possessing a nice balance of sensuality and sisterly affection. The result is you get a little more invested in everyone's welfare than you might otherwise get.

Released by indie distributor Uncork'd Entertainment, "Black Pumpkin" is a breezy, retro-vibed Halloween flick that entertains just enough to make it worth a view. A low-budget horror with chills, thrills, and a handful of inventive kills, "Black Pumpkin" was just right for this rainy, cloudy, and otherwise melancholy Halloween weekend here in my Midwest hometown.

AthanasiaReviewed in the United States on January 8, 2021
5.0 out of 5 stars
A Horror movie with STYLE!
Verified purchase
Black Pumpkin takes you on a thrilling adventure with an easy-to-love storyline and it's characters are immersive and fun!
I really loved it I watched it three times!
7 people found this helpful

LianeReviewed in the United States on November 21, 2021
1.0 out of 5 stars
Really bad
Verified purchase
There was almost nothing to like about this movie.

The casting was bad. Most actors were...inexperienced, I'll call it. The main "sister" character appeared to be the mom's age or older, but she was still in high school. All of them were clearly much older, which is fine I guess, but don't make your HS-age character look the same age as her mom... Some of them were good looking? Does that help make a better movie?

The budget was non-existent. No real effects, barely any real costumes, and Kool-Aid for blood effects.

**some partial spoilers of how people get killed ahead - don't read [the next paragraph; rest is okay] if you think that will ruin something for you and you haven't seen it yet**
Plot was thin at best. No explanations for anything. Nothing made sense. The kills were the best part of that- by "best" I mean the worst thing amongst all of the other terrible aspects. We get to see a girl get killed by a string of "Halloween lights" (aka xmas lights) that weren't even touching her. One thin strand around the neck for 5 seconds that was so loose most of the time, it just looked like she was wearing them as a huge loose necklace- then bam! Dead. Okay. Also get to see a girl stand on a path in the middle of the woods as a van rolls at her at a whole 10mph. She has nearly an entire minute to take 2 steps to the side and put herself in the middle of a whole forest where the van can't get to her, but instead she stands there and waits for it, then once it's close, she runs down the path the whole way until it finally gets her. Sure enough, that speedy 10mph kills her instantly and she basically explodes off-camera from that tap. All we get to see is it hit her, then we cut to a tree next to the fan, where we see a huge splash of Kool-Aid splatter hit the tree. All of the kills were similarly terrible.

Usually there's something entertaining in these teen horror/slasher flicks, but not this one! I didn't shut it off if that means anything... Then again, that was only because I was waiting for that explanation that never came. No, that 5 second video about bullying didn't do it, because none of these people were involved at all, and it said nothing about a subsequent "haunting" or anything similar either.

Just a generally lame, boring, B-flick. If you're equally as bored already and have seen everything else already- sure, go for it. I don't think you'll enjoy it much thought.

Anyone out there making low-budget horror movied, please watch this and learn. This is what NOT to do. If you're going for a real horror movie, make it better! If not, make it actually funny enough to work out for ya!

I don't think it deserves zero stars, but it isn't better than a one... Barely one as is. Watch at your own risk. Don't do it if your time is precious.

HermanatorReviewed in the United States on April 17, 2021
4.0 out of 5 stars
Good movie, stupid ending
Verified purchase
I wish I had a dollar for every time I wrote that headline. It seems people still know how to make good movies, just always with the lame over done twist ending!! But I liked the movie. I just get so sick of the predictable ending. At first I thought there wouldn't be one but alas, there was. But the rest of the movie I really liked. So if you can stomach yet another twist at the end then I'd still suggest watching it.
2 people found this helpful

WicingasReviewed in the United States on April 9, 2021
1.0 out of 5 stars
Lame
Verified purchase
I've seen worse which is about as positive as I can get. No originality. The story and script are shoddy. The acting was uninspired. Some humorous moments that were not supposed to be humorous. The usual stupid actions by characters (if you are on a country road and somebody is chasing you in a van, you run into the trees, not down the road, right?). Pretty much a lame, predictable flick. No scares whatsoever, not even a chill.
3 people found this helpful

keep it cute!Reviewed in the United States on May 17, 2021
1.0 out of 5 stars
Painfully Awful
Verified purchase
This movie is SO bad.... I don't know how to fully express how horrendous it truly is. It's hard to imagine that this movie was created in 2000 and anything. Poor script, painful acting, and the screams...... my goodness the screams! It was almost as if the actors had just received the script in that moment, and did the best they could. It's so bad it's funny! Now make that make sense!
2 people found this helpful

demonsRendangeredReviewed in the United States on May 9, 2021
2.0 out of 5 stars
Very boring, trust me
Verified purchase
Watched half way through then skimmed to the end. Really boring movie. Nothing exciting happens for the most part, just a lot of talk about a Halloween boogey man type thing but only a handful of minutes when we actually see this creature or whatever. Extremely uninteresting dialogue, I'm not sure what the people who put this together were thinking. Boring, boring, boring, how could they not know?
One person found this helpful
See all reviews
Back to top
Get to Know Us
Make Money with Us
Amazon Payment Products
Let Us Help You
EnglishChoose a language for shopping. United StatesChoose a country/region for shopping.
© 1996-2022, Amazon.com, Inc. or its affiliates