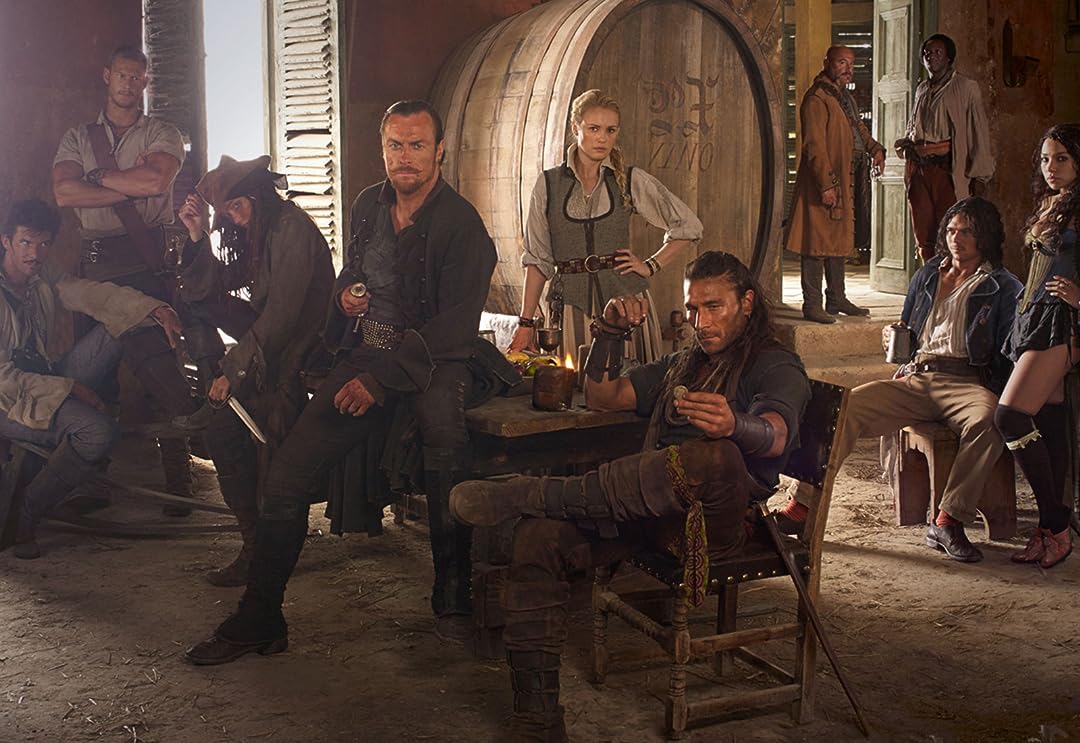 (2,333)
8.22015X-RayTV-14
When a prize of immeasurable value is smuggled onto the island, the pirates of Nassau must face the ultimate judgment: are they men, or are they monsters?

Elizabeth OhReviewed in the United States on May 13, 2020
2.0 out of 5 stars
Black Sails
Verified purchase
I love maritime history, however I'm not real keen on Black Flags. I'm convinced the writers are all in their twenties and have a firm belief in using the most filthiest of foul language will be attractive and successful for their program. I found it distracting, like that fly buzzing around your head in the lunch room. And many scenes are just so incredibly long and drawn out you wonder, "...where the heck is this going?" On the other side, the settings, costumes, bloody battles are really neat! I think the actors put in huge amounts of time studying their characters, who were really people, and are excellent. And one more thing, if you're into graphic sex scenes this is the series for you. I believe good writing omits the graphic but leaves in just enough your for your imagination to fill in the 'blanks.' You'll either happily sail along with this series or not.
3 people found this helpful

M.L.Reviewed in the United States on May 7, 2015
5.0 out of 5 stars
Well written. Beautifully staged. Great performances. Please put Season Three up quickly.
Verified purchase
I just finished watching the Second Season of Black Sails and I loved it. It isn't without it's flaws--the flashbacks got to be a bit much for me in the first episodes, but by the last episode where we learn why Flint's (past) violence against a single powerful Lord occurred, it was worth it. That flashback was particularly well done, probably because it was short. The writing is witty, often darkly humorous--which I love--and the acting is superb. Many of these actors are theater trained and yet they say so much with micro-expressions that there isn't a moment when one doesn't believe them. Toby Stephens as Flint is outstanding, although I'd like to see him laugh a bit. Zach McGowan as Vane is totally believable in his strength and his vulnerability, a rough combination to pull off well, but he does it expertly. Luke Arnold as Silver is funny and smart and filled with the kind of charisma that makes the viewer want to root for him. Tom Hopper, who I don't recall ever seeing before, has a quiet strength that he brings to the character of Billy Bones that I never remember jumping from the pages of Treasure Island--Hopper's wonderful and so is the character the writers have created for him. I haven't seen Hannah New in anything before, but I'll be looking for her now. She doesn't steal every scene she's in, I bet she's too good an actress for that, but she does make a statement when she's there. I love her character and her mixed and varied motivations. I especially like the chemistry she has with Zach McGowan's, Captain Vane and hope to see more of it in Season Three. I wasn't bothered by the love Flint has for either of the people he chose to love. I understand that graphic love scenes bother some, I simple wasn't bothered by any of them in this show. I think Starz does this particularly well. The Spartacus Series is another fine example--God's of the Arena is my favorite of that series. I'm looking forward to Season Three of this series and am finding myself cheering on the Black Flag! If sex and love between same sex couples bothers you, there are scenes depicting that in this series, and although they are well done, perhaps you should choose something else to watch.
10 people found this helpful

Willie GReviewed in the United States on January 25, 2020
1.0 out of 5 stars
Disc 1 will not load
Verified purchase
I purchased the entire series from Amazon. I was hooked on the series but when I went to view the second season, it would not load or play. I tested my bluray player to rule out problems with it. All the other disk in season 2 seems to be fine. Rather than returning the entire package I opted to purchase the second season as a stand alone product. Sadly the same problem with disc #1. I will not load and I cannot fast forward past the load screen. I think the manufacturer has a problem in the disk master and the subsequent products produced do not work with disk 1 or season 2. Frustrating!!! Again I verified it was not my player by loading and playing all the other included disks. I will attempt to return the second season I purchased. Has anyone else had this type problem?
2 people found this helpful

Rebekah WagenbachReviewed in the United States on May 11, 2015
5.0 out of 5 stars
Season 2 blows Season 1 out of the water!
Verified purchase
I love where they take the characters this season. This season blows the last one out of the water and I loved the first one! It takes the viewer back to before Captain Flint was Captain Flint, and furthers the story of Long John Silver. And then of course one can't help but love the bad boy Charles Vane. I love how this show portrays the real historical characters and situations that actually existed and happened, and intertwines them with the fictional characters of Captain Flint and Long John Silver. I promise this 5 star review has nothing to do with my new crush on Zach McGowan.
28 people found this helpful

D. RobertsReviewed in the United States on July 13, 2016
5.0 out of 5 stars
Back to the early 1700s, as seen through pirates' eyes
Verified purchase
GAME OF THRONES is a terrific series, but it is not the only ambitious, big-budget series that transports the viewer to another world. BLACK SAILS also takes us to a place we're not familiar with. In this case, it takes us back in time to the early 1700s in the Caribbean. It is a raw, savage place where pirates call the shots & take whatever they please. Civilization seems a world apart. Of course, even civilization is not bereft of the darker parts of human nature.

The show mixes historical pirates with fictional characters. In doing so, it does a superb job of laying out the character traits of these people who lived 300yrs ago. The casting is impeccable, but the one performance which stands-out is that of Zach McGowan as Captain Vane ~ a historical pirate. McGowan has an impressive, commanding screen presence and is very believable as a ruthless pirate. In short, he is one scary dude. Want to see what happens when bullies challenge other bullies? Watch this series!!

A difference between this season & Season 1 is that the present season gives us the backstory of Captain Flint, who is the main character (a fictional pirate). Like many pirates, he was a former officer in the British Navy. While some may find this to be far-fetched, this is actually historically consistent. A lot of pirates WERE former British officers who found themselves out-of-work after the war of Spanish succession.

J. DanielsonReviewed in the United States on June 5, 2017
5.0 out of 5 stars
An adult story that actually delivers adult entertainment
Verified purchase
Great story, excellent acting, and surprisingly good dialogue. This keeps you interested and fully engaged in the story. Almost every time you think you know what is coming, something else happens which looks impossible to overcome. Nearly every episode ends in a cliff hanger that compels you to watch the next episode. We have thoroughly enjoyed this production. This isn't Errol Flynn or Wallace Berry, but the sex and nudity are integral to the story line and are done fairly tastefully (just don't expect June Lockhart). This isn't for youngsters but is an adult story for adults, the sex and violence isn't overdone and isn't much more than regularly presented on broadcast TV.
One person found this helpful

MicheleNYCReviewed in the United States on August 10, 2016
5.0 out of 5 stars
A Masterpiece
Verified purchase
How can a fantastic series get even better? Season 2 of this series ups the drama begun in the first season - particularly for Toby Stephens and Clara Paget. We are truly living in a golden age of television. Maybe it's because it's based on history, but this is the series we actually own and watch again and again for the glorious cinematography and production values, the acting talent, the intricate storytelling and strategy, the articulate and beautifully written dialogue, the ships and amazing battles, all the lush sets and costumes. For every viewing we even watch the entire opening credits for the gorgeous imagery and music by Bear McReary. Others have written that season 1 was slow, but we were hooked from the beginning - and each season is better than the one before.
One person found this helpful

Texas RedheadReviewed in the United States on June 10, 2020
5.0 out of 5 stars
This was a great series.
Verified purchase
I binged watched this series and I thought it was great. Fantastic characters and story lines. They took a bit of creative license with some of the characters like Blackbeard and Long John Silver but overall, it was a terrific series.
One person found this helpful
See all reviews
Back to top
Get to Know Us
Make Money with Us
Amazon Payment Products
Let Us Help You
EnglishChoose a language for shopping. United StatesChoose a country/region for shopping.
© 1996-2021, Amazon.com, Inc. or its affiliates