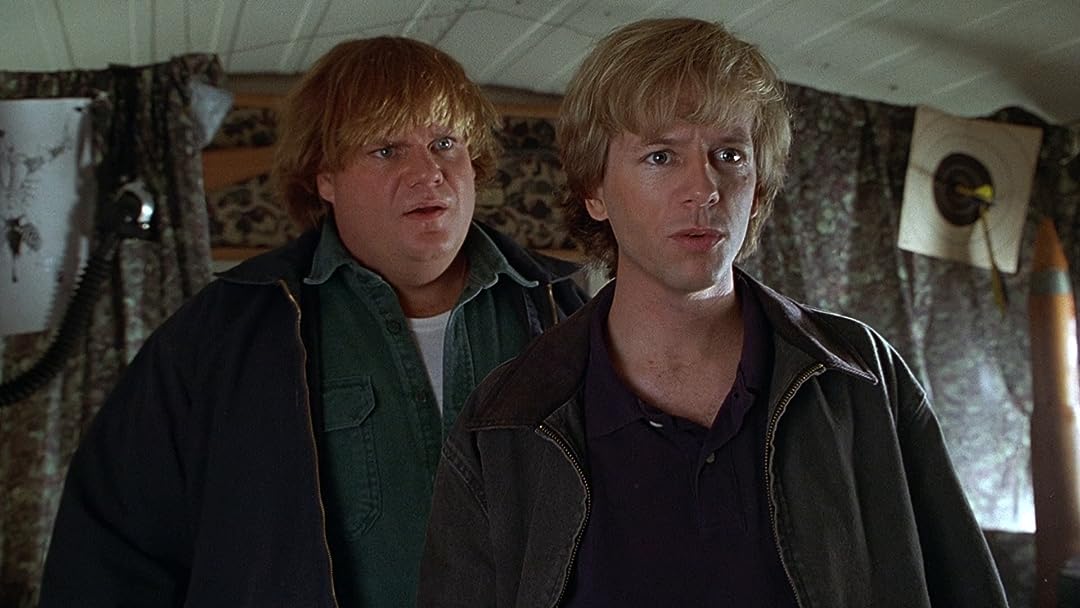 (5,326)
6.21 h 26 min1996X-RayPG-13
A gubernatorial candidate hires a special assistant whose only job is to make sure the candidate's well-meaning but incompetent brother doesn't ruin the election.

Leaves STARZ in 13 daysRentals include 30 days to start watching this video and 48 hours to finish once started.

Tek NickelReviewed in the United States on September 1, 2020
5.0 out of 5 stars
Miss the patoot outta Chris Farley
Verified purchase
Man, I miss Chris Farley. Dude just oozed funny. I can't imagine the scores of comedies he would have made during these times. He would have totally connected with today's youth without question. Its hard to find folks like that that are the embodiment of comedy like Robin Williams, Jim Carrey, Dave Chappelle, etc.
5 people found this helpful

Jakob lee cReviewed in the United States on December 7, 2018
5.0 out of 5 stars
Chris Farley is a God and you shouldn't even read reviews before buying
Verified purchase
Chris Farley is a legend in comedy, and a classic comedic actor. Beyond Tommy Boy, I think this is probably the best comedy he's done, and you should definitely not just watch the movie, but own the movie. It belongs in your collection. And now that you've been told that, you have no excuse not to buy this movie and build a shrine for it on your movie shelf.
5 people found this helpful

ReaperReviewed in the United States on May 4, 2021
4.0 out of 5 stars
A relatively family oriented movie.
Verified purchase
Very funny movie. A few scenes need to be edited out for un-acceptable stupidity. David Spade, Chris Farley and Gary Busey are comedic geniuses. A couple of drug references are in-apprioriate. When an apology involves assassinating a car, that's funny. He just wants to help his brother win an election but ends up almost destroying his chances. Can Spade keep Farley in check until his brother wins? I guess you'll need to watch and find out.

David M.Reviewed in the United States on October 11, 2012
5.0 out of 5 stars
Vintage Chris Farley and David Spade
Verified purchase
As the title of this review suggests, this is a vintage Chris Farley and David Spade movie. These two worked together very well as a comedy team and it shows in this movie. While this movie shares a remarkably large amount of its content with "Tommy Boy", one cannot be too surprised because this is the type of humor that existed back when this was released.

Because this is the type of humor I enjoyed back in the 90s and even through today, this movie holds a special appeal to me. Not everyone is going to like this type of movie as it is filled with Chris Farley yelling a lot and David Spade dealing with one blunder after another from Farley's character. The reason I give this 5 stars is simply because, for a comedy at its time, it stands out and is very easily remembered.

If you are looking for a light-hearted comedy with plenty of unfortunate situations, this would be a movie that should show up on that list. It will entertain you over the years as it has done for me and the type of comedy on display does not lose its humor as the years pass by.

LMLCABC06Reviewed in the United States on April 12, 2020
5.0 out of 5 stars
Funny!
Verified purchase
I bought this for a friend who somehow loved chris Farley and had never even heard of this movie! It’s quite funny. Not one of my favorite Farley works, but still very good.
One person found this helpful

Pandakitty69Reviewed in the United States on December 30, 2021
5.0 out of 5 stars
Great movie
Verified purchase
I liked the movie. I enjoy you can rent whatever movies you want from Amazon. I also like that they offer credits for shipping.

CrankReviewed in the United States on March 19, 2015
4.0 out of 5 stars
Not really that bad?
Verified purchase
Man, this film is just beaten down for no reason. Critics needed something to savage. PRETENSION is the name of the game here. Some of these critics should be embarrassed at some of the films they rate so highly. I think one of the worst films I have EVER seen, Elysium--and mind you I don't look to watch bad films--is sitting at almost 70% on RT. Riiiiiiiight. Yet even Tommy Boy was drowned in a bunch of negative and wholly irrational reviews. Not even over 50% on that site.

The film Black Sheep was indeed rushed and appropriated because of the more masterful and successful Tommy Boy. Siskel said he walked out of the theater lol. But when you get down to it the film is just a normal slapstick comedy and it includes Farley, one of the best at his profession. He is a warm presence for me. And sometimes that is enough. Many I guess disagree, and I am not sure for what reason. For one thing I saw Siskel and his brethren rate many TERRIBLE films much higher than this, and many great films along the same lines. I don't really trust critics and never have because my own critical thinking skills are very high. If you can't laugh at any of this I wouldn't even want to know you for one. How can you be so lame as to not even admit this is funny in parts?

What I cannot agree with I guess is that this film is bad. If this film is bad then so are a whole host of other comedies highly ranked in the canon. What and the heck divides this from films like Bridesmaids? Oh, I forgot the feminist movement is in full swing and it's okay as long as it's really popular to like. But not Farley. Oh man, what did these people think of when A&C and Three Stooges were on air? Apparently that was high-brow comedy of the first order LOL. I'm going to doubt audiences all thought that kind of humor was appropriate at the time. This is NOT a film near as bad as some of Adam Sandler's worst, and nor is it a film that is great. So big deal. I had fun watching this and it was not cringe-inducing. It had a good heart and did what it set out to do within the crazy constraints placed upon it; you can read about those on Wiki.

No, this is clearly not as good as Tommy Boy, or Caddyshack, or even Happy Gilmore--one of my favorite goofy comedies--but Farley puts his all into it. For 4 dollars I see no reason not pick it up. The bluray is robust and very nicely detailed. It's a trip back into the 90s when this guy was commanding a lot of the spotlight. He was divisive for sure. But I didn't think Belushi did anything more noteworthy than Farley did. So I guess to each their own. This is more like a 3.5 star film but it never overstays its welcome. It revels in its goofiness, its fast-written and somewhat sophomoric comedy. But it's also better than a lot of stuff today because it features a comedian that is better than most of what we have today in this genre of slapstick. I recommend it. It did get some bad reviews, but there were some critics like that of the LA Times who gave it a decent rating as well. It also has a good message within its hasty script.

There are so many terrible--often melodramatic--films I turn off today not even half-way through.... I just could not do that with this one. I don't recommend Beverly Hilly Ninja or anything, but this film was clearly a cut above that kind of drek. I always find it so hilarious that people compare Farley as a lightweight to Belushi and Candy. Well, Belushi was nothing more than a lightweight to Candy if you ask me. Few comedians did a film great as Plains, Trains, and Automobiles. Belushi did not carry films either IMO. And none of the three were really great Hollywood actors. To heck with the pretentiousness. This film was a good, fine romp with a few drinks. I was laughing more than I should admit I guess. Props for a good soundtrack with Mudhoney and B. Surfer's in the film!

Silver FoxReviewed in the United States on February 16, 2021
5.0 out of 5 stars
Farley and Spade do it again!
Verified purchase
Seen it 100 times! Never gets old! The bunk bed scene is one of my fave parts. Plus, I love Mudhoney's rockin' performance. Definitely a crowd-pleaser!

RIP, Chris Farley.
See all reviews
Back to top
Get to Know Us
Make Money with Us
Amazon Payment Products
Let Us Help You
EnglishChoose a language for shopping. United StatesChoose a country/region for shopping.
© 1996-2022, Amazon.com, Inc. or its affiliates