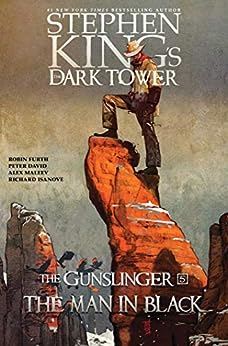 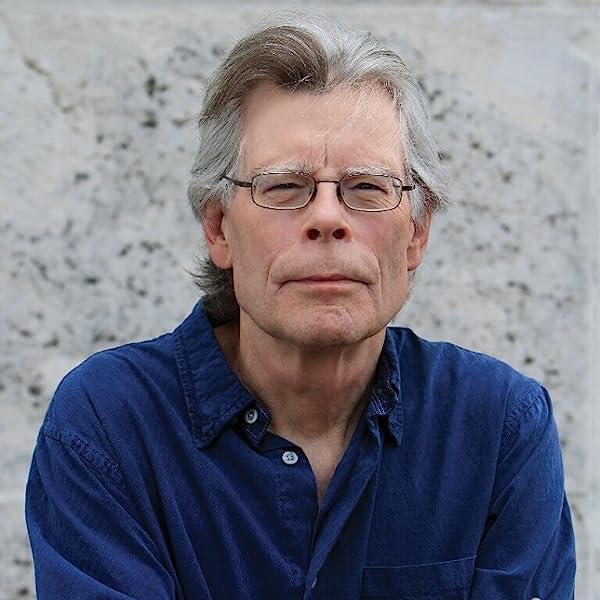 “The man in black fled across the desert, and the gunslinger followed.” With these unforgettable words, millions of readers were introduced to Stephen King’s iconic character Roland Deschain of Gilead. Roland is the last of his kind, a “gunslinger” charged with protecting whatever goodness and light remains in his world—a world that “moved on,” as they say. In this desolate reality—a dangerous land filled with ancient technology and deadly magic, and yet one that mirrors our own in frightening ways—Roland is on a spellbinding and soul-shattering quest to locate and somehow save the mystical nexus of all worlds, all universes: the Dark Tower.

Roland closes in at last on his elusive nemesis, the Man in Black. At Roland’s side is his newest ka-tet-mate, Jake Chambers—a boy from some strange other Earth of subways, turnpikes, and fluorescent lights. But to reach the Man in Black—and save the Dark Tower—Roland is prepared to risk it all. His life…his very soul…and even Jake on this final leg of a treacherous journey, to the destiny Roland has pursued for many long years….
Read more
Previous page
Next page
Due to its large file size, this book may take longer to download
Kindle e-Readers
Fire Tablets
Fire Phones
Free Kindle Reading Apps
Available on these devices 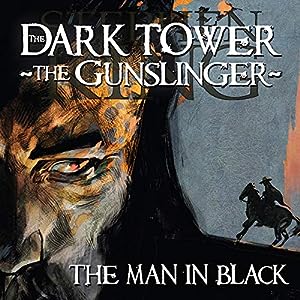 Dark Tower: The Gunslinger - The Man In Black
Kindle Edition
Page 1 of 1Start OverPage 1 of 1
Previous page
Next page

Stephen King is the author of more than sixty books, all of them worldwide bestsellers. His recent work includes Fairy Tale, Billy Summers, If It Bleeds, The Institute, Elevation, The Outsider, Sleeping Beauties (cowritten with his son Owen King), and the Bill Hodges trilogy: End of Watch, Finders Keepers, and Mr. Mercedes (an Edgar Award winner for Best Novel and a television series streaming on Peacock). His novel 11/22/63 was named a top ten book of 2011 by The New York Times Book Review and won the Los Angeles Times Book Prize for Mystery/Thriller. His epic works The Dark Tower, It, Pet Sematary, Doctor Sleep, and Firestarter are the basis for major motion pictures, with It now the highest-grossing horror film of all time. He is the recipient of the 2020 Audio Publishers Association Lifetime Achievement Award, the 2018 PEN America Literary Service Award, the 2014 National Medal of Arts, and the 2003 National Book Foundation Medal for Distinguished Contribution to American Letters. He lives in Bangor, Maine, with his wife, novelist Tabitha King.

Robin Furth is perhaps the only person around who knows more about the Dark Tower mythos than Stephen King himself, and is the author of The Dark Tower: The Complete Concordance.

Peter David is a prolific writer whose career, and continued popularity, spans more than twenty-five years. He has worked in every conceivable media—television, film, books (fiction, nonfiction, and audio), short stories, and comic books—and acquired followings in all of them.

Frank J. Konopka
5.0 out of 5 stars "there are other worlds than these."
Reviewed in the United States 🇺🇸 on January 23, 2013
Verified Purchase
In this excellent new work in the series of graphic novels based on the Dark Tower books by Stephen King, Roland continues his quest for the Tower, and the Man In Black who flees before him. Now he is joined by Jake, a young man who died in his world and is "reborn" in Mid-World. The only problem is that both Jake and Roland believe that only through Jake's death is Roland going to get closer to his ultimate goal.

As with the previous works in this series, the artistry is excellent, and the storytelling matches as well as possible with King's works. Occasionally the books take a bit of a different slant on the quest, but always within the context of the original tales. There is a bit of that deviation in this book, but it stays true to the overlying story, and actually in some ways enhances it.

The Constant Reader knows that Jake's fear that he is going to die is correct, and also that Roland knows it and has to decide at some point to save Jake or continue on his journey to speak with the Man In Black and gain more knowledge of what he is seeking. That confrontation is quite eerie, and there is some foreshadowing of what is to come. The book ends, basically, where the first King volume ends, and I suppose soon we will have the beginning of The Drawing of the Three. Can't wait!
Read more
One person found this helpful
Helpful
Report abuse

Sam Fett
VINE VOICE
5.0 out of 5 stars Other Worlds than this!
Reviewed in the United States 🇺🇸 on January 22, 2013
Verified Purchase
Thus ends the adaptation of The Gunslinger. Me and a friend have discussed how the comics and novel differ in minor details but yet stick to Kings over all vision of Roland and his quest. It is fun to think that just this time he might do something different that will change the outcome of his quest. As Jake would say there are other worlds than these. So far it has been a fun one and I look forward to continuing the journey with Marvel. This collection is under the mountain with Jake and Roland's Palaver with the Man in Black. It leaves off with Roland laying down to nap on the beach. If you have been following this series you know what to expect but if you are picking this one up for the first time I recommend getting the Waystation first. Or you could read the novels first and really get an adventure! I can't wait till the Drawing of the Three gets adapted.
Read more
2 people found this helpful
Helpful
Report abuse

Jonathan D Allen
2.0 out of 5 stars Not sure what others see in this
Reviewed in the United States 🇺🇸 on February 6, 2013
Verified Purchase
Man, what a letdown. This is my first two-star review of the year and I give it with a heavy heart. This should have been one of the better graphic novels of this uneven series, as the source material is some of my favorite moments in the entire Dark Tower series. It nails some of those moments, especially in the last issue/chapter, but that's the reason it gets two stars rather than one, and I don't give one-star reviews lightly. The changes to the original story are baffling, as they drain some of the more interesting moments of any tension for no appreciable gain, introduce new elements that don't make a whole lot of sense in Mid-World (the corpse lights, long-time readers will know what I mean), and have characters acting in baffling ways. I don't understand who the Roland of this comic is supposed to be, but he bears little resemblance to either the Roland of the books or of the graphic novels that came before this, almost as if the writers lost hold of what made the character tick. Yes, Roland always acted in a callous manner toward Jake, but his behavior toward the boy in this version comes across as more than a little confused and crazy. I almost feel that I need to re-read the original, non-revised version of The Gunslinger now to wash this out of my mouth. Sheer disappointment, and not even recommended for hardcore fans.
Read more
16 people found this helpful
Helpful
Report abuse

S. Gilmer
5.0 out of 5 stars Delivers Again!
Reviewed in the United States 🇺🇸 on April 9, 2013
Verified Purchase
I am a big fan of the original books by Stephen King, and think the graphic novels are an ideal way to bring new life to this story. The artwork is fantastic, the original elements add to the story, and it brings back the excitement I recalled when I first read this as an young adult. If your a fan of this series, it is a great way to relive it. If your new to the series, then I highly suggest you read both the books and the graphic novels.
Read more
One person found this helpful
Helpful
Report abuse

A. Sapienza
5.0 out of 5 stars A great way to re-experience the books with a twist
Reviewed in the United States 🇺🇸 on March 17, 2013
Verified Purchase
Love the graphic novel adaptations of the Dark Tower series. Writer Robin Furth has said she's following the original tales closely but taking each section of Roland's journey from just a little different perspective, which makes the stories both familiar and new.

The only problem with this series is that I'm going to need more room on my bookshelf!
Read more
One person found this helpful
Helpful
Report abuse

Amazon Customer
5.0 out of 5 stars comic
Reviewed in the United States 🇺🇸 on October 11, 2019
Verified Purchase
book looks fantastic. I love Stephen King and I didn't even realize all of these were available
thank you
Read more
Helpful
Report abuse

Jonathan Butler
5.0 out of 5 stars Another triumph
Reviewed in the United States 🇺🇸 on January 18, 2013
Verified Purchase
Perhaps a "pure" fan of comic books can provide a more objective review, but as a rabid Tower Junkie, it's hard to find fault with any excuse to revisit the tale that started them all. The series has excelled at fleshing out moments hinted at in the book, while serving as an incredible visual companion to key scenes, such as the palaver between the Gunslinger and the Man in Black. I buy these the day they're released, and read them as soon as I get home.
Read more
2 people found this helpful
Helpful
Report abuse

Edward K. Fulcher
2.0 out of 5 stars KNOCK OFF!!
Reviewed in the United States 🇺🇸 on August 29, 2021
Verified Purchase
Not original book, knock off. Original hard back is leather bond with gold writing.
Read more
Helpful
Report abuse
See all reviews

Jhammond
4.0 out of 5 stars tower power
Reviewed in the United Kingdom 🇬🇧 on April 4, 2013
Verified Purchase
really good story and graphics match story read all steven kings dark tower books these graphic novels are just as good as the original books if not better
Read more
One person found this helpful
Report abuse

Amazon Customer
5.0 out of 5 stars Five Stars
Reviewed in the United Kingdom 🇬🇧 on February 14, 2017
Verified Purchase
Was a gift. arrived in time. recipient loves it.
Read more
Report abuse
See all reviews
Report an issue
Does this item contain inappropriate content?
Report
Do you believe that this item violates a copyright?
Report
Does this item contain quality or formatting issues?
Report