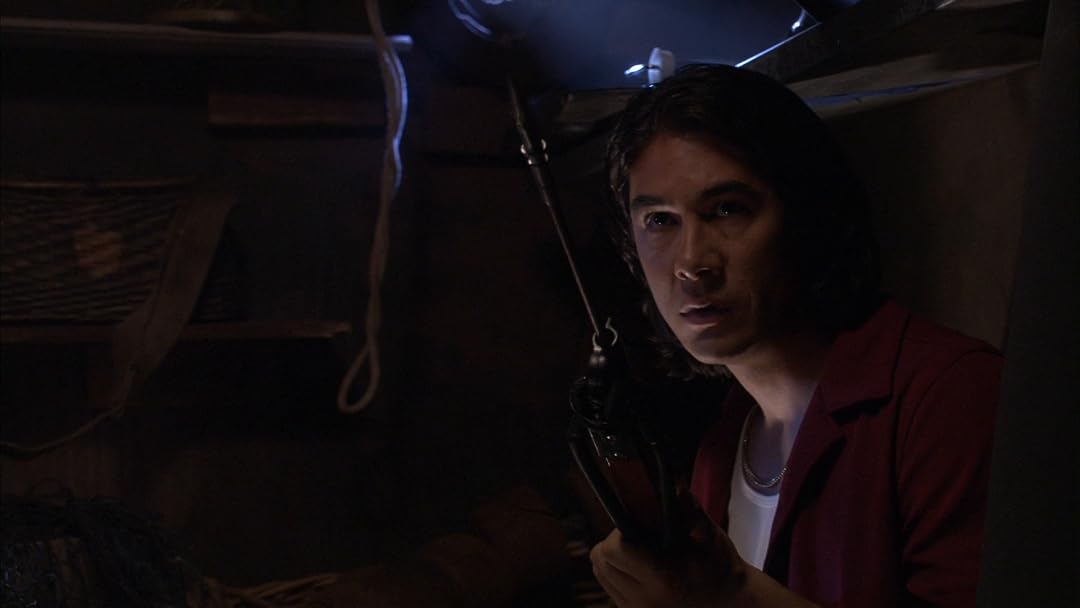 The Black Waters of Echo's Pond

(111)
4.31 h 32 min2010R
Demonic evil is unleashed when nine friends uncover a board game that lets loose a force from hell that feeds on pent-up emotions.

Ace-of-StarsReviewed in the United States on March 13, 2014
4.0 out of 5 stars
The "REVIEWS" Almost Ruined this Movie for Me!
Verified purchase
The trailer was absolutely awesome, and the concept ("Jumanji meets Evil Dead") piqued my interests in this movie like nobody's business! *BUT*... it seemed as if "EVERY" review I'd ever come across about this movie (it's "stupid story," its "dull acting," its "gaping plot holes," etc.) were enough to put me off from making one of my classic "Impulse Buys" of a movie I'd been unfamiliar with and knew next to nothing about. So for the past couple of years I'd waited... and waited... and waited... and waited for an opportunity to actually watch this movie in some form or manner in which I would not be required to part with so much as a single dime, just so I could see with my own eyes whether the trailer was somehow misleading me or if perhaps all of the "angry reviewers" were really on top of their game or if they had all just been smoking from the same bong. Well... I'd just very recently had that opportunity to finally catch this movie in its entirety in one of the "No Pay to Play" methods I use to determine whether or not a movie is going to be good enough for me to consider adding to my own personal DVD library... and it turned out that the almighty "reviewers" were in fact attempting to dissuade me from something that was so intense and so deep that I have to wonder in all honesty if they'd even watched the same movie as I had?

Yes, we all know how easy it is to pan a movie (no pun intended) when you've viewed it as a "freebie" and have invested nothing in it financially; it's something else entirely when after watching a movie under such circumstances you declare, "HELL YEAH! I'm DEFINITELY going to go out and *BUY* that one for myself!"

No, many of the "negative" reviewers are not entirely incorrect in some of their assessments -- the story can get a bit "formulaic" at times, and it *CAN* seem confusing and full of plot holes if one is mere "casually viewing" and not paying particularly close attention to the details of the story as it unfolds. One of the biggest complaints, re: the physical representation of the "Pan" character, is such a lame diss to me that I fear that these folks probably would've preferred that the thing had been done in some gaudy CGI effect rather than in the raw and very surreal way in which they presented it in this film which actually fits the mood and the tone of the movie. As for any problems I might have personally had with the movie, my biggest and only real complaint with the movie, as some others have already mentioned, was its tacked-on ending which while not anything that totally destroyed the movie still played like a safe-escape puss-out that leaves us with the sort of ambiguous ending that forces us to draw our own conclusions (a severely overdone staple in modern horror movies) rather than just letting the movie end on its raw & gritty note... in other words, they chose to go with more of a "Jumanji" type ending than one that evoked more of its "Evil Dead" element.

So there's my dilemma: recommend a movie that I think gets short shrift unjustifiably only to set myself up for flaming missiles of hatred should someone accept my recommendation and winds up agreeing with the common concensus? ...or just keep my opinion to myself and enjoy all the fun trappings this movie has to offer in the peace of my own home but feel guilty that there are others out there who might likewise have the same appreciation for this movie as I but who have been made apprehensive about wanting to take that chance on something so universally frowned upon? (sort of like how the game in the movie challenges you to bear your soul honestly... and suffer the consequences of what you've just shared with everybody -- a classic "No Win" situation)

Cyril J. MartinezReviewed in the United States on October 28, 2013
3.0 out of 5 stars
Somewhat disappointed
Verified purchase
I'm a big horror movie fan and when I saw this one on Amazon and recognized some of the actors in it I had high hopes for the movie.
Actor Robert Patrick of Terminator 2 fame both acts and produces this movie about ancient evil spirits being released and possessing people.
The premise is good but poorly executed with the typical sub standard acting of a lower budget film.
Bottom line recommendation ... It's okay to rent and watch once but to purchase I would recommend you spend your money on something better.
One person found this helpful

PR GUYReviewed in the United States on May 12, 2014
2.0 out of 5 stars
They Should Have Saved All Of The Gore And Donated It To The Red Cross
Verified purchase
What has become of a true horror flick? They should have saved all the blood and donated it to the Red Cross. Horrible acting! Horrible script...every other word was fu---! This should have been a 30-minute short on how not to butcher people. A total waste of time and money. I've taken notes and will never watch or buy a movie directed or acted by this crew. Granted...if you love gore (lots of it) this is for you. But it is mindless. I laughed throughout the film...and it wasn't supposed to be a comedy...I think.
2 people found this helpful

Bookworm09Reviewed in the United States on August 24, 2017
4.0 out of 5 stars
Well worth the wait
Verified purchase
My boyfriend and I were so excited to see this when we first saw the trailer.... And that's the last we heard about it. For years, and I mean years, we looked up this movie. We tried to find it everywhere and anywhere . Finally we got a realease date. So you better believe we pre-order it, the second it went up. Let me tell you, it was well worth the wait.

Now it is not the best movie out there, but it holds it's own horror movie wise. It reminds me alot of jumanji and the evil dead. Its a very fun idea and a great watch. At the end of the day it's a good movie and it doesn't cost alot of money to own. Where can you go wrong?
2 people found this helpful

TricksickeryReviewed in the United States on November 9, 2019
1.0 out of 5 stars
Oh My!
Verified purchase
Started out interestingly enough, well made - then turned into a teeny bopper gore fest. A wasted afternoon and a wasted monetary investment. But can't complain, really. It's the first I've watched I haven't liked - and I'v e watched quite a few movies on Amazon!
One person found this helpful

Colen S MckinnonReviewed in the United States on September 6, 2013
3.0 out of 5 stars
Good B horror, One Time watcher!
Verified purchase
Entertaining B horror movie that has some decent special effects. The Movie is based on a ancient game that twits and manipulate your emotions and beliefs to Kill everyone. The acting is not superb but it does the job as far as character development. The story gets a little shaky and not quite clear as to why certain things happen but the special effects help with the story and keep you somewhat interested. Like I said its good for a one time spin around the DvD player and then its time to walk away.
5 people found this helpful

angela silvesterReviewed in the United States on October 27, 2014
5.0 out of 5 stars
great little movie
Verified purchase
great little movie...... ive seen some of the actors before in other horror flicks
great plot good acting too and some blood and dead bodies for good measure
this movie reminded me of another movie called open graves mbam-setup-2.0.2.1012
One person found this helpful

Fred AdelmanReviewed in the United States on September 28, 2013
2.0 out of 5 stars
UGH!
Verified purchase
Waited four years for this to be released on DVD and I wish I waited four years more. Typical slasher film that offers nothing new to the genre. Some nice scenery and dollops of gore, but not much else. I was expecting a lot more considering the cast.
One person found this helpful
See all reviews
Back to top
Get to Know Us
Make Money with Us
Amazon Payment Products
Let Us Help You
EnglishChoose a language for shopping. United StatesChoose a country/region for shopping.
© 1996-2022, Amazon.com, Inc. or its affiliates