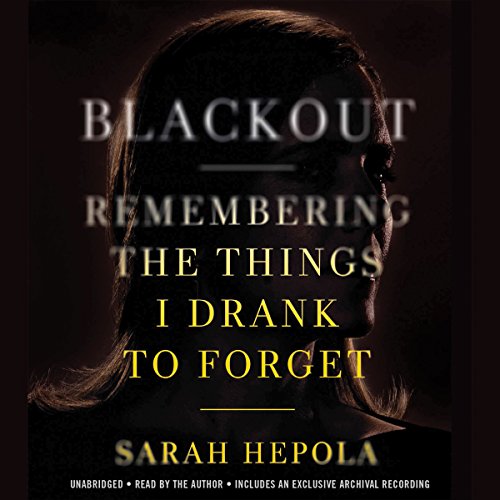 Blackout: Remembering the Things I Drank to Forget

4.6 out of 5 stars
4.6 out of 5
2,045 global ratings
How are ratings calculated?
To calculate the overall star rating and percentage breakdown by star, we don’t use a simple average. Instead, our system considers things like how recent a review is and if the reviewer bought the item on Amazon. It also analyzes reviews to verify trustworthiness.

Debby M.
3.0 out of 5 stars It became frustrating...
Reviewed in the United States on July 7, 2019
Verified Purchase
This was the first book I ordered for myself after I became sober. I had had so many blackouts and thought I could identify with the author. As I read and kept reading, it was like the whole pattern kept repeating itself over and over. Relapse after relapse and the story would start over again. I am not saying anything bad about the author, and I hope she found a way to stay sober (I didn't finish the book), but I was looking for encouragement and it wasn't that. I truly would not recommend this book to someone who is newly sober and looking for help to stay that way. . Everyone thinks differently, of course, but I would suggest this book only for those who are strong in their sobriety and are up for the story of someone who struggled for many years. I found at that point in my life, I needed books that offered more hope and ways to work on staying sober. Thankfully, there are many books on the subject, and I found the ones that worked for me.
Read more
47 people found this helpful
Helpful
Report abuse

Apryl Pooley
5.0 out of 5 stars And witty, honest, culturally relevant surprise for someone who thought they'd read all the alcoholic memoirs necessary
Reviewed in the United States on February 24, 2016
Verified Purchase
As recovering alcoholic myself, I've read all the "women alcoholic" memoirs I could get my hands on, but Hepola's voice and and experience is the first I've read that truly mirrors the drinking culture that exists for those of us born in the mid-70s to mid-80s.

"In an age of sex tapes and beaver shots, there was nothing edgy or remotely shocking about a woman like me reporting that, hey, everyone, I fell off my bar stool."

Hepola captures the classic problems alcoholics have always faced--the "gerrymandering of what constitutes an actual 'problem'," the strained relationships, the blacking out--but she does so for a generation of "young, educated, and drunk" women who find power in drinking, who are sexually liberated, who forgo having kids to chase their dreams, who like being in charge of their own pain.

Throughout the book, Hepola wrestles with the troubling sexual interactions she had while drunk. "I spent years wondering if I'd lost my virginity, and if I'd consented..." "Many yesses on Friday nights would have been nos on Saturday morning. My consent battle was in me." "When men are in a blackout, they do things to the world. When women are in a blackout, things are done to them." While I was quick to pinpoint sexual violation as the reason for my own drinking, I appreciated that Heppola explored some of the deeper issues of why people, especially women, drink. And why it's so hard to leave behind.

While Hepola wrestles with why she ended up where she did, she never blames anyone or anything for her circumstances and she found the strength within herself to make a better life. Unlike a lot of alcohol memoirs, Blackout doesn't simply just end at drinking one day and sober the next. Hepola lets readers join in on the complicated first years of sobriety to see how the process of leaving oneself and finding oneself intertwines to build a whole person.

I highly recommend Blackout to anyone who wants to learn about the life of an alcoholic woman (or any addiction) and find hope that recovery is possible--and also to anyone who has struggled with finding themselves, being comfortable in their own bodies, knowing how to balance expectations of potential with reality. Hepola's brutal honesty of her own insecurities, confusion, grandiosity, and vanity left me grateful that I got to spend a little bit of time in her head to learn a few things about myself.
Read more
55 people found this helpful
Helpful
Report abuse

Ginger Stevens
5.0 out of 5 stars Difficult to put down...
Reviewed in the United States on March 25, 2017
Verified Purchase
As a recovering alcoholic with 2.5 yrs sober, living in Austin, with several decades of service in the bar scene here? There were times when I wondered if I had written this in a blackout of my own? Brilliantly and savagely recorded. I loved every word, and gathered renewed strength from her insights and observations. I will be passing this out to my friends...and maybe a highlighted copy for mom?
Read more
36 people found this helpful
Helpful
Report abuse

Kindle Customer
5.0 out of 5 stars 4.5 Painfully Honest Stars
Reviewed in the United States on December 8, 2018
Verified Purchase
An IRL (in real life) friend recommended this book and she was right, I loved it (thanks Kate). Although this memoir was hard to read in places, it was always always honest and had just the right touch of humor.

<b>SUMMARY</b>
Author, Sarah Hepola, grew up in Dallas, TX and attended the same middle and high school my children attend, so if course I was very curious about her and the book.

Sarah took an interest in alcohol at a frighteningly early age. When she was as young as seven years old, she began to sneak drinks out of her parents beer and enjoyed the buzz. She had a couple of unfortunate incidents with alcohol when she was way too young but after one particularly bad experience, she was able to reign it in and fly under the radar. She made it through high school and college while binge drinking, occasionally blacking out and annoying her friends from time to time. I'm her 20's and 30's, Sarah drank her way through Austin, Dallas and NYC while establishing herself as a journalist. As most of her rowdy friends began to settle down, Sarah found herself frequently being invite to lunch during which her friends told her they "needed to talk." Her behavior was getting more noticeably out of control and undesirable as her friends were growing up but she was still drinking like she was in college.

Finally, Sarah had enough and found the courage to stop drinking for real. She was expecting her life to immediately fall into place as soon as she stopped drinking but found it was a huge struggle to assimilate herself into a lifestyle which did not include alcohol. She had always assumed her life would become uninteresting when she was no longer the party girl but was happily surprised to find her new life eventually became full and much better.

<b>WHAT I LOVED</b>
I am amazed by Sarah Hepola's honesty. It must have been very painful to be that honest with not only herself and millions of strangers, but to maintain that level of honesty knowing her parents, friends and frenemies would be reading all the drunken details of her life was so brave!

I love her writing style, she's so darn funny!!! There was not a single part in the book that I skimmed or found tedious. She caught my attention on the first page and never lost it.

<b>WHAT I DIDN'T LOVE</b>
Nothing! There was nothing I didn't love about this book. It is so well written, honest and I cannot find anything to critique in this book.
Read more
11 people found this helpful
Helpful
Report abuse
See all reviews

Abbie
5.0 out of 5 stars GET THIS!
Reviewed in the United Kingdom on August 16, 2017
Verified Purchase
I am 20 years old and have dealt with blackouts for over a year now. I know the anxiety and shame of waking up from a night out and not remembering a thing from the night before. I realised I had a problem and this book helped me so much in realising that alcohol isn't suited for me anymore. Even if you think you have a slight problem or are going down the wrong path. GET THIS BOOK. It truly changed my life. Thank you Sarah.
Read more
22 people found this helpful
Report abuse

C. E. Anderson
5.0 out of 5 stars Gripping narrative of one woman’s battle to find her life
Reviewed in the United Kingdom on January 16, 2020
Verified Purchase
Downloaded this book after seeing a review years earlier and the reviewers weren’t wrong! It was a cracking read!
Sarah’s story of her descent into alcohol-dependency had me gripped at every turn and had me willing her to get through all the obstacles she faced along her journey.
Tackled with humour and insight, the narrative isn’t one of despair or bragging - it provided a window into alcoholism and into a personal struggle with my own demons (we all have our poisons to deal with them so I delighted as Sarah faced hers and found contentment with who she is). If you’re looking for an honest short biography by a talented writer - this should be your choice.
As an aside, if you’ve read Bryony Gordon’s books, this will be right up your street! Enjoy!
Read more
4 people found this helpful
Report abuse

joanna Harper
5.0 out of 5 stars Addictive read
Reviewed in the United Kingdom on December 1, 2017
Verified Purchase
A heart wrenching portrayal of a woman caught in the trap of using a crutch to limp through life's simplicities. Couldn't put it down. For the first time I identified with the naked truth if my own destructive behaviour through the voice of this author.
Read more
17 people found this helpful
Report abuse

Lizzi
5.0 out of 5 stars Life-changing book!
Reviewed in the United Kingdom on June 10, 2018
Verified Purchase
This is a brave, honest and brilliant book. It made me laugh, cry & reflect on my own drinking career. Ive never read anything like it & never read something which struck so many chords with me personally. Thank you Sarah Hepola for writing this book. You smashed it out of the park & have changed the way I intend to live my life. If you are a black out drinker & want to stop drinking. I highly recommend this book.
Read more
9 people found this helpful
Report abuse

HW
3.0 out of 5 stars Interesting read
Reviewed in the United Kingdom on March 21, 2020
Verified Purchase
This book was ok. I thought it would focus on more subtle alcoholism in a society of bing drinking culture, but it was clear from the beginning the author had a problem from a young age so didn’t really leave me considering if I should change any of my own habits. It was however an interesting read and incorporates science into why people ‘blackout’
Read more
One person found this helpful
Report abuse
See all reviews
Back to top
Get to Know Us
Make Money with Us
Amazon Payment Products
Let Us Help You
EnglishChoose a language for shopping. United StatesChoose a country/region for shopping.
© 1996-2021, Amazon.com, Inc. or its affiliates