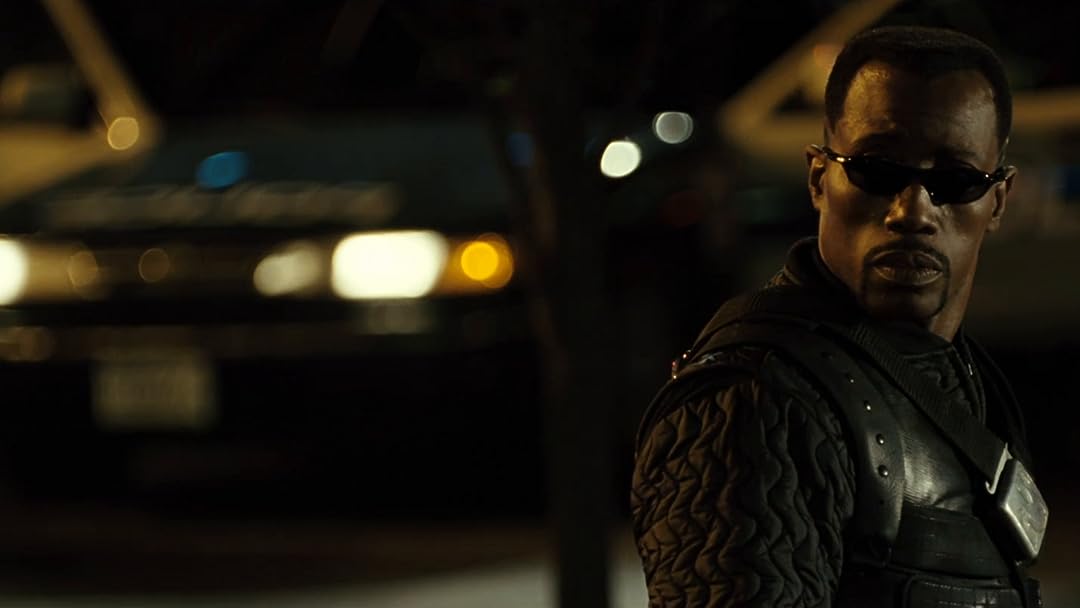 (2,795)
5.82 h 2 min2004R
The final battle begins and the trinity comes to an end! Blade is back and his enemies have grown in number since they resurrected their king, Dracula.

joel wingReviewed in the United States on December 24, 2020
2.0 out of 5 stars
Blade franchise made one too many movies
Verified purchase
The Blade movie franchise went one movie too long. The first was a real horror flick. The second was an action story. The third was just a dud. The basis of the story was that the original vampire Dracula (Dominic Purcell) was revived by the vampire lords and Blade (Wesley Snipes) was obviously going to have to confront him.

The first thing you notice is some horrible casting. Dracula was found in ancient Mesopotamian crypt and they decide that Purcell should play him. There is nothing special about him at all. In fact there are shots of him walking down the street with his shirt open that just look horrible. They needed someone with a real presence to play the famous Dracula but they failed.

Second it decided to add some jokes with Ryan Reynolds and Patton Oswalt joining the cast. It was not a good mix. They also had some scenes which were unintentionally funny such as when Snipes, Reynolds and Jessica Beal walk down the street with their swords and bows with everyone looking at them. This was also supposed to be when they were wanted by the police. Nothing like letting everyone seeing them when they are on the run from the authorities.

One of the only positives was that the action wasn’t half bad. Snipes also brought his usual attitude to the role but it was wasted in this film.
C

The original was great. The effects were kinda cheesy by modern standards, but it was good for the time and they didn't overdo the early CGI so it still held up.

Blade 2 was Blade being on touch with his feelings and making friends with vampires and was a giant basket of nonsense.

But then Blade 3 comes in and fixes everything. Blade fights Dracula. Ryan Reynolds brings his sarcasm to the script. No one likes any vampires anymore. It's all good.

And the story holds up just fine. They went big with having Blade fight the ultimate vampire in Dracula. It was cheesy, but in a fun way. I love this movie and it holds up great after all these years.

Now I eagerly wait for Blade 4: Blade vs The Cast of Twilight (I'm all Team Blade in that one)
8 people found this helpful

Amazon CustomerReviewed in the United States on April 11, 2019
1.0 out of 5 stars
A Bucket Full of Suck
Verified purchase
It's impressive when a movie does almost everything wrong. So Blade 3 isn't just bad, it's impressively bad. The story sucks, the directing sucks, the acting sucks, even the action sequences suck. Ryan Reynolds (doing a trial-run for Deadpool) only offers momentary breaks from all of the awful. What makes it especially disappointing is how good the first two Blade movies are. I've heard the stories about what a troubled production this was, but it still doesn't prepare you for just how bad the movie is.

So if you're looking for a cool, stylish, over-the-top vampire action movie...look elsewhere. Please. Save yourself.
13 people found this helpful

Harry MillsReviewed in the United States on July 26, 2020
5.0 out of 5 stars
I could watch another 3 or 4 BLADE movies.
Verified purchase
And Jessica Biel is probably the best female action hero we never get to see. It's sad.

The only thing I didn't like, but wasn't terribad, was the shaky cam. With the kind of movement skills Snipes and Biel have, it was a real shame they felt the need to fake up so much of the action. Just hire the best stunt coordinators and DO IT! These aren't your average actors that they have to use camera tricks to try to make it APPEAR like there's actual action. Do actual action.

A couple actors said, years later, that Snipes wasn't the easiest guy to work with.

A minor point about actors, in general:

"This isn't a popularity contest, old man." from this movie, but just "Want a drink, Joe?"

They always pause too long after the comma, which isn't ordinary speech. it's an acting/directing affectation that snaps me out of my suspended disbelief. Tired of it. Blade III was one of the first times I noticed this, and it wasn't a big deal. But I've seen it hundreds of times, since, and it's just not natural. Blade could pull it off, because he's a different breed, unique to himself.

Just a shame there weren't more of these cranked out.
2 people found this helpful

A. FosterReviewed in the United States on December 29, 2016
5.0 out of 5 stars
Come for the Ryan Reynolds, stay for the Jessica Biel (Ignore Wesley Snipes entirely)
Verified purchase
Ryan Reynolds steals this movie as a wise-cracking smart-ass called Hannibal King. Wesley Snipes kinda phones it in as Blade; he looks bored mostly. But this really is the best of the Blade trio of films. Jessica Biel is very believable as a (literal) vampire fighter -- unusual for a starlet. Best in the series!
19 people found this helpful

WALTReviewed in the United States on June 29, 2021
5.0 out of 5 stars
WISH THERE WERE MORE LIKE THIS, PHENOMENAL
Verified purchase
NO SPOILERS. AS THE BLADE FRANCHISE MOVES ON TO AN OSTENSIBLE CONCLUSION, WE RECEIVE LESS TALK AND MORE ACTION THAN EVER BEFORE. WITH THE ADDITION OF DOMINIC PURCELL, OF ......PRISON BREAK, THE SERIES........A GREATER VILLAIN TO PLAY THE ORIGINAL DRACULA COULD NEVER BE FOUND. HIS PERFORMANCE WAS SPECTACULAR AND BREATHTAKING. THIS 🎞
FILM SHOULD RECEIVE ACCOLADES FOR THE SPECIAL EFFECTS DEPARTMENT, EDITING, AND A PLETTY DECENT PLOT. IT CONTAINS
QUITE A BIT OF CAMPY WIT, AS FOR EXAMPLE WHEN THE HUGE BLOND VAMPIRE ASKS IF THEY HAVE SEEN HIS TINY DOG. SNIPES
HAS THE CHARACTER OF BLADE DOWN TO PERFECTION, AND AS HE IS A REAL MARTIAL 👩‍🎨 ARTIST, HE CAN DO NEAR ANYTHING
ATHLETIC. GET OUT THE 🍿 AND THE 🍕 AND SETTLE DOWN TO ENJOY THIS GREAT 🎥 MOVIE.

RavenzgateReviewed in the United States on March 16, 2018
4.0 out of 5 stars
Great movie
Verified purchase
Love this movie, one of the best in the Blade franchise. I am a huge Ryan Reynolds fan, so this movie is perfect for me. Story line was okay, the ending was a little confusing to follow...This was the only negative. The movie was filled with action from start to finish.
8 people found this helpful

PoeReviewGuyReviewed in the United States on June 1, 2019
2.0 out of 5 stars
Slow-motion music video
Verified purchase
Ugh! I watched the Blade trilogy within 2 days, and this one is a total bust. The worst of the three, I don’t think this movie knew what it wanted to be from the very beginning.

Having the “new breed’s” team attacked was supposed to be a turning point in the plot, but it became (yet another) slow motion music video that smacked of The A-Team TV series. Besides this, the crew was just so stupid, it was hard to care what happened to them!

Do yourself a favor: watch the first two movies and just skip this one. Or at least watch it with the remote in your hand, so you can fast-forward through the multiple stupid parts.
See all reviews
Back to top
Get to Know Us
Make Money with Us
Amazon Payment Products
Let Us Help You
EnglishChoose a language for shopping. United StatesChoose a country/region for shopping.
© 1996-2021, Amazon.com, Inc. or its affiliates