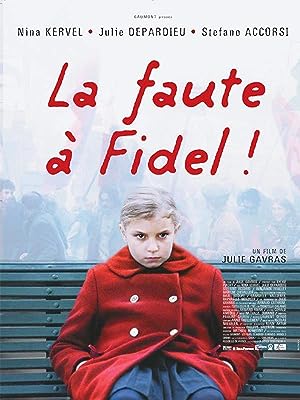 Blame it On Fidel

RhayzzaReviewed in the United States on July 5, 2021
2.0 out of 5 stars
Absolutely NOTHING 'funny' about this...
Verified purchase
...I love foreign movies/subtitles, all that. I love the 70s. This...? Was just INFURIATING. Had to stop it when the child asks if they are Communists, living in this tiny apartment, eating crap food, no garden...I had to scream YES at the monitor. Everyone has this grand illusion that Communism brings everyone UP and are equals. No, it very rarely works out that way for the commoners. Everyone is dragged DOWN to the very lowest common denominator: The END of it, that's how it's ALWAYS been for centuries upon centuries. I simply do not understand why ANYONE would imagine it going any other way.

That kid...I felt so sorry for her. And no matter which group she ended up in at the end: Still had to JOIN, assimilate, be a sheep. That's the part nobody seems to get. Both sides of the entire political coin are sheeple. It's bloody depressing.

Extra star for the child's acting.

Additionally, the irony of her wealthy father's situation actually punctuates.

FredReviewed in the United States on February 1, 2021
4.0 out of 5 stars
French. seventies, leftist
Verified purchase
Interesting, humorous and enjoyable for someone with leftist views. A nine-year-old resists the efforts of her parents to move her from a Catholic school to a public school because she likes her school. By the end of the movie she has rejected the close-minded attitudes of the teachers at her school and asks to be transferred to public school. Set in France in the seventies, it might not work well for someone clueless about Europe at that time.

SimplySiriusReviewed in the United States on July 4, 2019
5.0 out of 5 stars
Very important movie about how parental activism affects their children
Verified purchase
This is an important film that shows how children are affected when their parents become political activists. Very thoughtful and well crafted story created by Julie Gavras, the daughter of the activist Costa-Gavras, who made a popular movie from the 1960's called "Z".
One person found this helpful

Victor L. HernandezReviewed in the United States on February 8, 2008
5.0 out of 5 stars
Not really about Chile, Comunism, Fascists or Femenism, but more about a child's view on the shortcomings of parents!
Verified purchase
I thought that the parents' ideology and the actual political sublot was less interesting than Anna's struggle to understand the discrepancies and immaturity of her parents. She clearly takes control when she innocently asks her Dad to explain the difference between solidarity and sheep behavior for which the father has no response. Another amazing show of her ability to set limitations to her father is when she runs out of her house with her brother to the library. When she decides to come back her father sees her in the eyes with fury, and she stands tall and shows her mother how to place limits on him. That was truly amazing.

Truthfully, the leftist and rightist characters and their respective cliches, as well as the bonus pro-choice advert, were in no way as relevant (or even as fairly portrayed) as how it was the reaction and analysis of a child and adults. The parents are living in an unrealistic dream believing that they are actually helping the Allende regime from Paris. The open their apartment to hairy smoking drinking and late night comunist ideologits and students that all they do is plan and converse on utopic comunism. Anna doesn't understand where her parents are going, but she reminds them that she and her brother are more important to them.

In the end, when she actually changes schools and joins in the circle with the other kids, it is Anna becoming a child again understanding her parents' limitations, forgiving, adapting and caring. What a great movie you should all see it!!!
6 people found this helpful

Suresh C. KariReviewed in the United States on December 24, 2009
5.0 out of 5 stars
have doubts, will survive
Verified purchase
I think the movie is all about the child protagonist. How she is forcefully weaned away from one ideology to another purely on the whims of her parents. young Nina is from a well to do family and her whole life of living in mansions and studying in catholic school is turned upside down because of her parents ideological shift. She protests at every stage and constantly keeps asking her parents what if they are wrong?
But ultimately she seems to give in but as the last scene suggests, she becomes accommodating and open in her views and is now ready for the whole wide colored and multidimensional world without any prejudices. It is a beautiful evolution of the child.
One person found this helpful

JJSReviewed in the United States on June 16, 2010
5.0 out of 5 stars
Blame it on Fidel
Verified purchase
Great Movie! I've seen it at least 4 times. I personally can relate to this movie as my child hood has haunting similarities, but I wounder if some may not be able to relate as their experience growing up may have been very different. This movie is in French which I understand a little and I have been there so that adds to the enjoyment for me. If you do not like reading caption you will not make it through this movie. It is politically motivated and has heavy Marxist overtones, which I am not, but it was the world I grew up in. The young actress is great in this film. 5 stars

DaveReviewed in the United States on November 22, 2015
5.0 out of 5 stars
Five Stars
Verified purchase
Great
See all reviews
Back to top
Get to Know Us
Make Money with Us
Amazon Payment Products
Let Us Help You
EnglishChoose a language for shopping. United StatesChoose a country/region for shopping.
© 1996-2021, Amazon.com, Inc. or its affiliates