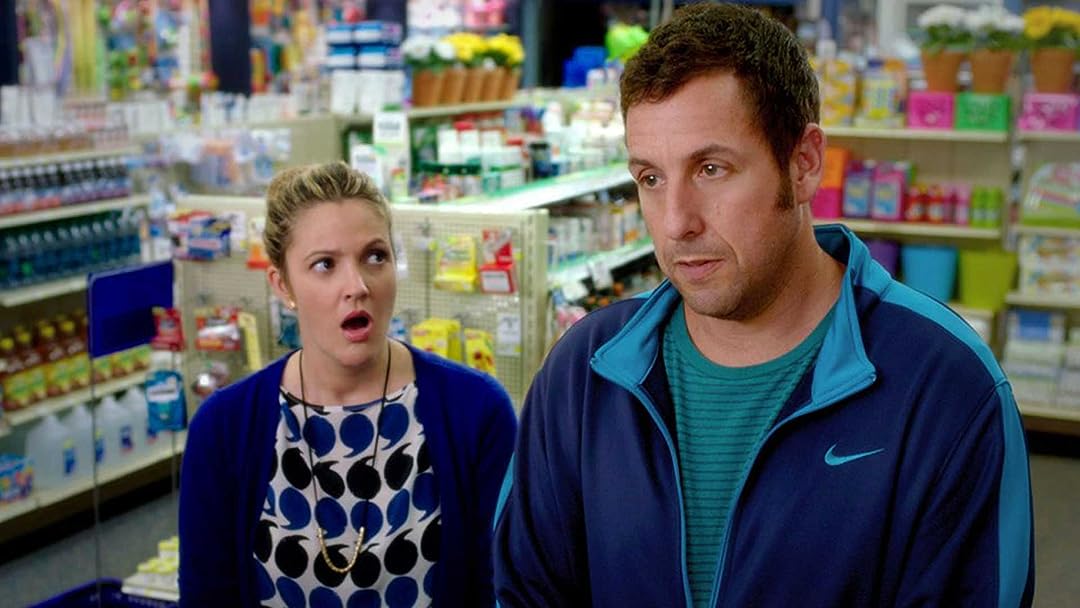 (23,201)
6.51 h 57 min2014X-RayPG-13
Adam Sandler and Drew Barrymore star as single parents whose families get swept away for a blended family honeymoon in the African Savanna.

Allen H. WestReviewed in the United States on March 31, 2016
5.0 out of 5 stars
Just FEEL GOOD and the Critics be Damned!
Verified purchase
To hell with the Critics! There's something special about a movie that can make you feel so good inside - over and over! Drew and Adam just blend so well. There are so many goofy moments and scenario's that are pure Sandler without some of the tasteless humor of some past offerings. We've viewed this movie about 15 times over the past six months and there's something magical that leaves good feelings each and every time - sort of like good sex is always GREAT! Interesting that the Wedding Singer backup Singer appears in the Ball Park announcers booth - dressed the same way and many other co-stars from Wedding Singer are in the Movie.

I have about 800 cable channels with all the Premiums and most content is so boring but each time this shows up we watch it for that Feel Goodness like a Junkie. Of course, this not Shakespeare or God Father Great but it is what it is and succeeds in making you feel good! Park your Critical nature and let go and feel it, often real life can't live up to it but see it as virtual reality of how we'd love our Blended Marriages turned out but may not have. It's entertainment, silly as hell but feeeeels so Good ! Thank you Adam and Drew!

Nurse SportsFanReviewed in the United States on February 17, 2018
5.0 out of 5 stars
Love the Barrymore/Sandler combo!
Verified purchase
I love anything with Adam Sandler and Drew Barrymore, they are wonderful together. This book is no different. Lauren is recently divorced, is dealing with a jerk of an ex. She has 2 sons. Jim is a widower, trying to raise 3 daughters on his own. They get set up on a blind date and it's horrible. They can't stand each other. They run into each other a few times since. It isn't until circumstances set them up in Africa on a vacation for blended families (of which the staff presume they are) that they really get to know each other. Lauren is kind and caring to his daughters and they adore her. Jim is the male figure her sons have been looking for. As they grow to respect each other as parents, they find they really do like each other.
14 people found this helpful

DIY MomReviewed in the United States on January 13, 2016
5.0 out of 5 stars
I was very entertained, as good as 50 first dates
Verified purchase
It's definitely an Adam sandler/happy Madison film, make no mistake. It's not on par with "Spanglish" as far as a removal from Sandler's general film genre, but it's not as immature as "little Nicky" or "big daddy". It's middle ground...sorta like "Click". As I am writing this, I am surprised how many Sandler films I have seen and how many he has made. This was what I was hoping for though, after this duo made 50 first dates I seriously thought about and checked on any upcoming pairings of Barrymore and Sandler in the future. I like the wedding singer, but it was a lot more immature than "50", and Blended matches 50 for all its good points, heart and ridiculous antics and is possibly a little more mature. I really enjoyed Blended, in fact, I'll buy it and watch it often. The first 15 minutes are what I have been replaying in my head over and over again and laughing aloud. Seriously, this film had some good laughs, and not just between Sandler and Barrymore, but between Barrymore and mclendon-covey they had great banter!
Those two should do a film or several. I loved laughing at the film and I thought the premise and backdrop for the film-an African tourist safari catering to blended families-was really interesting. Sandler was more demure in his typical attitudes, more real it felt and Barrymore gets better looking with age, I wish they would dress her in prettier clothes, she is beautiful and authentically so.
Having started a family since "50 first dates", having kids and complicated families in this film made the actors and story a more enjoyable experience...The blended premise was very appropriate given today's statistics.

I didn't love everything about the film, Sandler always pushes a little too far for my taste, but it wasn't terrible, the film has many redeeming moments and the uncomfortable, embarrassing feeling that Terry crews instills in every moment he is on screen makes it all worth it.

Seriously, just watch this film if you are on the fence, it's a little unusual in the premise, delivers on production quality and is very entertaining.

A CustomerReviewed in the United States on May 17, 2022
5.0 out of 5 stars
Adam Sandler/Drew Barrymore-Nuff Said
Verified purchase
ANY Adam Sandler movie gets a VERY HIGH rating from EVERYONE in our family—— adults, youngsters, AND those very hard to please kids AKA “teenagers”! All of the movies featuring Sandler & Drew Barrymore are a hit at our house (right along with the majority of Sandler movies). So much so that on any given day, you may well find ANY ONE OF US in our family randomly watching one of these movies…. For the 100th time. Cant praise Sandler & his movies ENOUGH——for giving us comedies that people of ANY AGE truly ENJOY watching, & that are for the most part APPROPRIATE for any age to watch. Can you say (or remember) “All Skate”?! They are great for family movie nights—- not movies parents have to endure cuz the kids want to watch them, & vice versa.
One person found this helpful

K R TReviewed in the United States on February 22, 2020
5.0 out of 5 stars
This is funny!!! And very much like 50 first dates... but funnier.
Verified purchase
Ok, if you like Adam Sandler, and Drew buy this!! If you are a guy, buy this! If you are a woman buy this! It really cracked me up, and I needed the laugh. These two actors are really good together. If you are way uptight, don't buy it,... its good humor and the jokes keep rolling every line!

She has two boys, he has three daughters... and they are raising them just like themselves, poor kids! ;) They fight well in this movie, its charming with lots of jokes. And if you say 50 First Dates movie Tom is in this movie. LOL. Wont tell you more, just rent or buy it if you think you may remotely like it.
2 people found this helpful

KamWowReviewed in the United States on February 8, 2017
5.0 out of 5 stars
Cute movie.
Verified purchase
Very cute movie! I think Drew Barrymore and Adam Sandler have some great movie chemistry, and this movie just adds to that. It is a fairly clean movie in the sense that there are no explicit scenes, aside from a couple "adult" jokes, but I really wouldn't be offended to show this to a mature child. It's pretty funny, has some very real moments. A couple scenes where eh, maybe you should advise your child on your feelings on the matter (it does touch on a teenage boy and adult magazines, then somewhat makes the case that it was silly for a mom to object to dirty magazines, and that male influence tells you that this is perfectly okay: which isn't the best advice, but at least it's kept brief that it doesn't detract too much from the movie). Good ending, and you walk away feeling happy. Overall, I like it. I think it is definitely worth a watch.
5 people found this helpful

Don T. Gala, Ph.D.Reviewed in the United States on July 18, 2020
5.0 out of 5 stars
Wow! This movie will catch you off guard! Fun movie.
Verified purchase
When I saw Adam Sandler was in this movie, I thought, "O' Good Grief! Another one of those." However, I was surprised to see Adam Sandler act and act well. He still provided us with some good clean humor, but he provided something different, empathy. Adam Sandler really got into his character and does a nice job. You will enjoy the movie, at the very least. It is a fun movie to watch. BTW, Terry Crews is in this movie as well. Now, he shows that he can act. From the Expendables to his role as an entertainer at a resort. He is great! Of course, the ladies do quite well. All of the characters make this a fun movie to watch. Enjoy!

Jef JaegerReviewed in the United States on October 18, 2016
5.0 out of 5 stars
Great movie...even better than I expected!
Verified purchase
This movie was great! I saw the trailer a few years back, thought it might be a good movie, then forgot about it. Recently, my wife and I rented and streamed it. It was even better than I had hoped! It has a pretty good story...more of a story than many comedy-type movies. It is a movie that single parents especially could relate to, tugs on the heartstrings 'just a little' here and there, and is really funny almost the whole way through! It has some of the corny feel good kind of elements in it too, which may not be for everyone, but it is a really good balance of all the things I mentioned. I would buy this one and watch it some more times...
8 people found this helpful
See all reviews
Back to top
Get to Know Us
Make Money with Us
Amazon Payment Products
Let Us Help You
EnglishChoose a language for shopping. United StatesChoose a country/region for shopping.
© 1996-2022, Amazon.com, Inc. or its affiliates