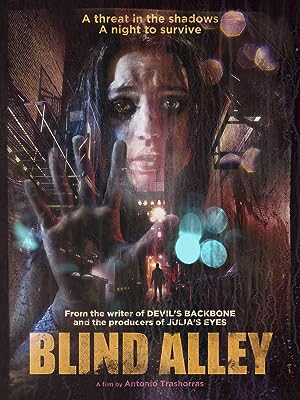 (7)4.41 h 16 min18+
Rosa finds herself trapped by a serial killer in a deserted launderette hidden down a dark alley. After hours of a sadistic game of cat and mouse, she discovers something even more disturbing about her aggressors.

GirlGamerReviewed in the United States on June 15, 2015
3.0 out of 5 stars
NOT REALLY A MUST SEE
Verified purchase
Its not bad and its not th best Horror Movie ive ever seen. Its a slow build up until th last 40 or so minutes. Its a fresh take on Vampire movies and the special effects were pretty good.
Report abuse

James N SimpsonReviewed in the United States on December 4, 2016
5.0 out of 5 stars
Great Simple Spanish Thriller
This quite a good simple thriller from Spain (English subtitles). Rosa, (Ana de Armas, Knock Knock, War Dogs), a young Cuban immigrant working an unfulfilled life in housekeeping in a hotel, tired after a long shift where she is being hassled by an ex boyfriend on the phone who still expects to sleep with her, as well as dealing with her boss who enjoys the power he has over her on the job, plays a voicemail on her phone from a call she missed as her phone isn't working too well. She has gotten to the final round for I assume a James Bond opening credits dance role that we saw as this movie's opening credits. She may finally be able to get out the depressive existence she's in. However her sister has also left a message that the washing machine isn't working, so since she only has one outfit she's got to go to the 24 hour laundrymat down a long alleyway from her house. We the viewer know other women have been being killed in this alleyway.

The movie changes what it is for last ten minutes or so, (some DVD versions front cover image spoil this for the viewer) which I thought wasn't necessary as it was a great survival thriller on its own anyway, although the special effects at this point are brilliant. The last minute or so of the movie though didn't really make sense (see my comment). But that didn't detract from the movie overall, which was really enjoyable.

amigamanReviewed in the United States on January 13, 2014
1.0 out of 5 stars
I sick of amazon movies that are not in english
Verified purchase
No I didn't watch but a few minutes of this movies. So I can't say if it's really any good or not but I sick of amazon not making it possible to tell if a movies is not in English before I buy or rent the movies. I believe amazon allows this for money sake. I can't think of any other reason not to make it clean if a movies is in English or not. So I guess this review is really about amazon selling and renting movies and I give them one star.
Report abuse
See all reviews
Back to top
Get to Know Us
Make Money with Us
Amazon Payment Products
Let Us Help You
EnglishChoose a language for shopping. United StatesChoose a country/region for shopping.
© 1996-2021, Amazon.com, Inc. or its affiliates