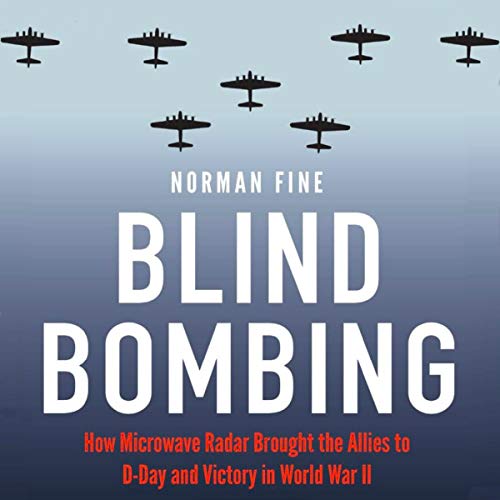 Blind Bombing: How Microwave Radar Brought the Allies to D-Day and Victory in World War II

Norman Fine (Author), Marlin May (Narrator), University Press Audiobooks (Publisher) & 0 more
4.8 out of 5 stars 38 ratings
See all formats and editions
Sorry, there was a problem loading this page. Try again.

Since the discovery of radar early in the 20th century, development across most of the world had progressed only incrementally. Germany and Japan had radar as well, but in just three years, the Allies’ new radar, incorporating the top-secret cavity magnetron, turned the tide of war from doubtful to a known conclusion before the enemy even figured out how. The tactical difference between the enemy’s primitive radar and the Allies’ new radar was similar to that between a musket and a rifle. The cavity magnetron proved to be the single most influential new invention contributing to winning the war in Europe.

Norman Fine tells the relatively unknown story of radar’s transformation from a technical curiosity to a previously unimaginable offensive weapon. We meet scientists and warriors critical to the story of radar and its pressure-filled development and implementation. Blind Bombing brings to light two characters who played an integral role in the story as it unfolded: one, a brilliant and opinionated scientist, the other, an easygoing 21-year-old caught up in the peacetime draft.

This unlikely pair and a handful of their cohorts pioneered a revolution in warfare. They formulated new offensive tactics by trying, failing, and persevering, ultimately overcoming the naysayers and obstructionists on their own side and finally the enemy.

4.8 out of 5 stars
4.8 out of 5
38 global ratings
How are ratings calculated?
To calculate the overall star rating and percentage breakdown by star, we don’t use a simple average. Instead, our system considers things like how recent a review is and if the reviewer bought the item on Amazon. It also analyzes reviews to verify trustworthiness.
Top reviews

Brian Groover
5.0 out of 5 stars Riveting, Page-turning History
Reviewed in the United States on February 17, 2020
Verified Purchase
I did not think I could be captivated by history. It was the subject I hated most in school, and avoided when I could. Yet Norm Fine's story of how critical the development of microwave radar was to victory in World War II is compelling. I could not put it down. Technical details are explained when necessary, so one need not be a scientist or engineer to follow the story, yet scientists and engineers will learn enough to appreciate the background. The human story is forefront, in understanding how the technical story helped to win the war.

The engaging way he tells the story may have been driven by his discovery, early on in doing research for the book, that his own uncle was one of the very first Pathfinder navigators. It provides a personal element to the story which made it all the more real for me.

There are a few anecdotes which made me laugh out loud, such as the quip by one of the early researchers, as they were testing an early version of the radar and realized they could tell how fast cars were driving, that they should never let the police learn about that discovery.

The story does tend to jump forward and back in time, as the author follows various sub-stories. But it was never confusing, even though I read the book via audio.

I have read very few history books in my life--less than a dozen since finishing school. But I do not think I have enjoyed any of them as much as this one.

This book is highly recommended.

I was not compensated in any way for this review.
Read more
6 people found this helpful
Helpful
Report abuse

Frederick E Eayrs
5.0 out of 5 stars Important addition to WWII scholarship
Reviewed in the United States on April 18, 2020
Verified Purchase
I purchased this book pre-publication in July. It arrived late November and I read it immediately. I have done considerable reading on WWII and I must compliment Norm Fine on his effort. This is a unique story and a welcome addition to WWII scholarship. Many books fail, when they try to integrate their story with the bigger picture of the war years, and the author does this seamlessly. I have a good friend, who was a navigator on a flying fortress during 1943 - 1944 and actually survived 25 missions. The challenges these planes faced with overcast conditions, flack and inaccurate bombing are very familiar to me.

This was a good read and I highly recommend it to anyone interested in the enormous challenges and technical victories compressed into those four short years of WWII.

Semaj
4.0 out of 5 stars Good on the history, less so on the technology
Reviewed in the United States on June 18, 2020
Verified Purchase
As someone who is familiar with magnetrons and the peripherals that support its function, I found the history of its development and employment quite fascinating. The MIT Rad Lab was a famous institute by the time I reached my academic majority and I used things that they had first developed in my doctoral research. I had no idea how the lab came to be or how the magnetron was invented (in England) but sent to the US for development by the new Ratheon Corp. And the guy at Raytheon whose chocolate bar was melted in his pocket by the microwaves from the magnetron (an event which led to Ratheon's creation of the microwave oven) later turned into my Dept. Chairman at Northeastern University. So I was there and they were there but with this book I found out how they got there. That said, the technical discussion was definitely rather thin. Still a good read and an important addition to the history of technology in WWII.
Read more
2 people found this helpful
Helpful
Report abuse

Gil Garver
5.0 out of 5 stars Informative
Reviewed in the United States on September 2, 2020
Verified Purchase
Being a well read lay reader on the war, I appreciate books that tell me something that I don't know. I knew microwave radar helped defeat the U Boats. I did not know that microwave radar was extensively used in the bombing campaign. This book is indeed very informative but I would have liked a bit more detail on the challenges and technical difficulties of bringing such a thing to battle ready fruition. That much said I recommend this book to your average WW2 reader
Read more
2 people found this helpful
Helpful
Report abuse

Arthur Fine
5.0 out of 5 stars Blind Bombing documents the development and significance of microwave radar in WWIi
Reviewed in the United States on June 18, 2020
Verified Purchase
Although close to the genesis of this effort, I regard this story as one that has been neglected in the historical narrative of World War II. The book argues the premise that microwave radar development was a major factor in winning the war, and then backs it up beautifully.
Read more
One person found this helpful
Helpful
Report abuse
See all reviews
Back to top
Get to Know Us
Make Money with Us
Amazon Payment Products
Let Us Help You
EnglishChoose a language for shopping. United StatesChoose a country/region for shopping.
© 1996-2021, Amazon.com, Inc. or its affiliates